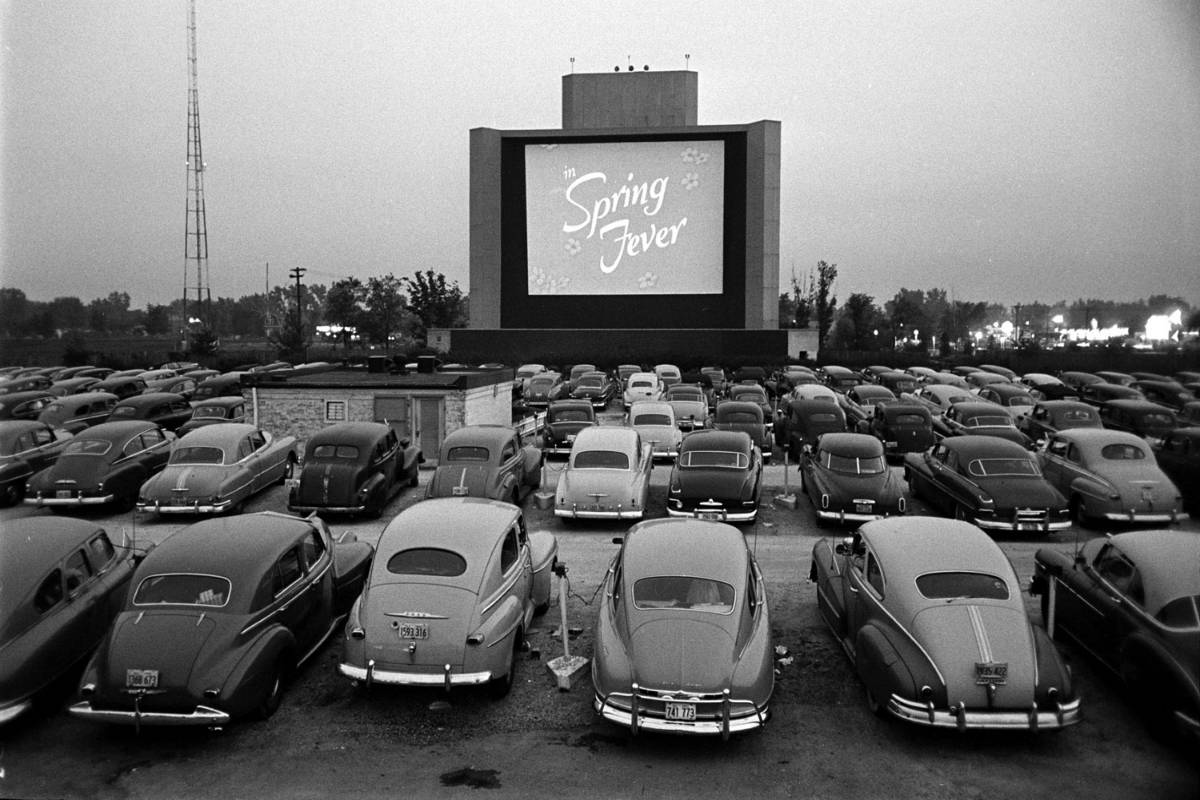 Want to enjoy movies and the great outdoors? These 16 New England Drive-in Movie Theaters are a great place to start.

We can thank New Jersey auto-parts salesman Richard Hollingshead and the size of his mother for coming up with the idea. Apparently his mother found traditional movie theater seats a tad confining. So he placed a 1928 projector on the hood of a car in his driveway, and tied sheets to the trees in his backyard. Voila! An American tradition was born.

After further experimentation, Hollingshead received a patent for the idea in May of 1933, and created Park-In Theaters, Inc. in Camden, N.J. He charged 25 cents per car and per person to see Wives Beware, a British comedy. The drive-in movie became an icon of American culture, after his creation, especially in the 1950s and 60s following World War II. Parents, children, and teenagers would travel to them frequently on the weekends, and it was considered one of America’s favorite pastimes. At one point in time, the U.S. boasted 5,000 drive-ins open across the country. Today, about 400 drive-ins remain in the U.S., with some of the best ones located right here in New England.

The Leicester Triple Drive-In has three screens for movie viewing. At $28 a carload, one can drive over to Leicester to see a drive in movie with family or friend, and order food from their snack bar. Customers love the friendly and welcoming staff there, which makes for a great movie experience.

The Boston travel guide,10best.com, lists the Mendon Twin Drive-In as a must-see attraction. You can see two movies for $27 a car, and enjoy concessions from their snack bar, ice cream window, or Pop’s Beer Garden, added in 2014. The very adult 5000-square foot patio offers six draft beers, wines by the glass, fire pits, and a view of Screen One. Mendon Twin Drive-In opened June 14, 1954 and is celebrating its 63rd year.

Wellfleet Drive-In is the only drive-in theater located on Cape Cod. With a playground and mini-golf course, it’s very kid-friendly. Fodor’s Travels lists it as one of America’s best drive-in movie theaters by Fodor’s Travels.

The Bangor Drive-In is back in business, reopening in July 2015 after an initial run that lasted 35 years. Equipped with twin screens, the drive-in is open in the summer, and is pet-friendly. Yes, Fido is welcome. Bangor Drive-In is also available for event rentals if your’e tired of Chucky Cheese birthday parties.

The Skowhegan Drive-In Theatre has replaced its old 35-mm film projection equipment with new digital equipment to bring it up to speed to show the latest films. They’ve also renovated the concessions both, so there’s plenty of tasty options for everyone.

The Milford Drive-In Theater has a new digital projection and Dolby digital sound system, and is also pet-friendly. Open since 1958, the drive-in also has its own web app so it’s easier to check out the latest information regarding movie times and weather reports.

The Northfield Drive-In is a bit of an anomaly since half the drive-in is in New Hampshire while the other is in Massachusetts. This theater opened in 1948, and weekly movie selections include at least two shows.

Weirs Drive-in Theater was one of the first drive-ins to open in New Hampshire, and is still owned by the same family that began operating it 40 years ago. Equipped with a snack bar and four different screens, Weirs Drive-in typically offers something for everyone on its screens.

Pleasant Valley Drive-In is located in the middle of nowhere in the tiny town of Barkhamsted. But don’t equate location for the quality of the facility. Pleasant Valley Drive-in offers a variety of concessions, including burgers, pizza, clam boats and fried mozzarella. The theater also welcome pets. Open since 1947, the theater can host up to 250 cars. Fridays is  “Carload Night”, where you can fill your car with as many people as you’d like—all for only $20 per car.

The Mansfield Drive-In Theatre and Marketplace is a drive-in and flea market rolled into one. The drive-in plays a double feature every night, and is open from April to September. The flea market, open on Sundays, is home to a variety of vendors. So come early to shop before the movies.

The Southington Drive-In originally opened in 1955, finally closing in 2002. The drive-in reopened in 2010 after Southington voted to purchase the property and expand it to the Recreation Park nearby. The drive-in has been able to donate $33,000 to 14 local non-profit civic organizations in Southington since reopening.

The Sunset Drive-In Theater is aptly named. You can catch a beautiful sunset before catching a flick on one of four screens. The drive-in counts a snack bar, playground, and mini-putt area among its amenities. Hot rod and classic car owners get special treatment here: the first two rows are reserved for them.

FAIRLEE MOTEL AND DRIVE IN THEATER

If you’re passing through Vermont and need a place to stay, and want something fun to do, the Fairlee Motel and Drive-In Theater might be just the ticket. Dedicated to staying up to date with the newest digital trends, the drive-in is currently raising funds for a new projector to keep the drive-in open. The drive-in is open seasonally, but the motel is open year-round.

The Rustic Tri Vue Drive-In has three giant outdoor screens and a full concessions stand. With digital projection for all their screens now, you can see the latest movies while enjoying the view from your car. The space is also available for rental for birthday parties or summer bashes.