Ask many of today’s classically trained musicians to improvise, and you’re likely to be met with fear and anxiety. Not so for Providence, Rhode Island, cellist Laura Cetilia. She revels in living in the musical in-between.

Cetilia still loves her Mahler and Britten—she plays in the Eastern Connecticut Symphony Orchestra and the New Bedford Symphony Orchestra—but her real passion is improvised and conceptual music. “Conceptual music is not about melody or even rhythm,” she explains. “It’s about sound over time. That’s a huge shift compared to contemporary classical music, where it’s still meters and keys you have to play.”

Take this composition she wrote for a string quartet. In it, the musicians need to slide up their respective instruments in half-note increments, essentially creating one 20-minute-long glissando. The notes need to remain in the correct chordal structure—i.e. move together so that the sound is tonal—and the instrumentalists must also sing the note as they play. “It’s kind of impossible,” Cetilia admits. “But the imperfections are what make it beautiful. Things start rubbing up against each other. You get all these overtones that you won’t hear if it’s done perfectly. The result with human error makes this beautiful moment.”

Playing this kind of music, says the 42-year-old, is both liberating and scary. “I’m attracted to that fear,” she says. “What I like about it is that it’s all about the moment. Everyone—the audience and the performers—are experiencing the same thing, in a way. I think when you’re busy sawing away on these notes [in traditional music], you’re so concentrated on what you’re doing that it separates you from the listener, whereas if you have to sit in silence for a minute before you play one note, and then sit in more silence, you’re experiencing the same thing as an audience member. It gets to the heart of what performing should be—you’re sharing this moment and this space with the listener. It’s what I love about it.”

Cetilia performs in a variety of groups dedicated to experimental music. She and her husband, Mark Cetilia, perform together as Mem1—she on an 1892 German cello, often gigged up with a computer and other electronic devices, and he using video/audio hardware and software. They improvise to create a sonic duet. Cetilia also plays in Suna No Onna, a viola and cello duo committed to performing new music, and Ordinary Affects, a collaborative effort of performers and composers devoted to experimental music.

Appropriately, Cetilia’s romance with the cello starts with a robot. Like many children, Cetilia was forced by her mother to take piano lessons, which she resisted. But in fifth grade, she saw the movie Electric Dreams. “There was a cellist in it and the computer falls in love with her after hearing her practice,” Cetilia recalls. “The owner of the computer falls in love with her, too. I fell in love with the cello through that movie.”

The dream might have died with the film’s closing credits, but Cetilia, who grew up in East Los Angeles, went to a public school with a music program. “The orchestra’s conductor was really keyed into what was going on around town,” she says, noting that he referred her to a program on the California State University campus called the Saturday Conservatory of Music. “It was for kids who are really into playing music. You get group lessons and then orchestra on Saturday mornings from nine to twelve. I would stay until three because this amazing cello teacher would give me lessons. It was for low-income students, mostly Latino families, so it was very affordable for my family. That sealed the deal for me to have that.”

The Saturday program gave Cetilia a haven in a world where, as the child of a Mexican-American mother and a white father, she always felt a little in between. “I was the only one of my friends who was mixed. I never felt like I fit in, so I became accustomed to that,” she remembers of her weekday public school life. “It’s another reason why I didn’t go the traditional route after graduating from school. I didn’t want to do what everyone else was doing musically. It’s something that’s ingrained in me.” 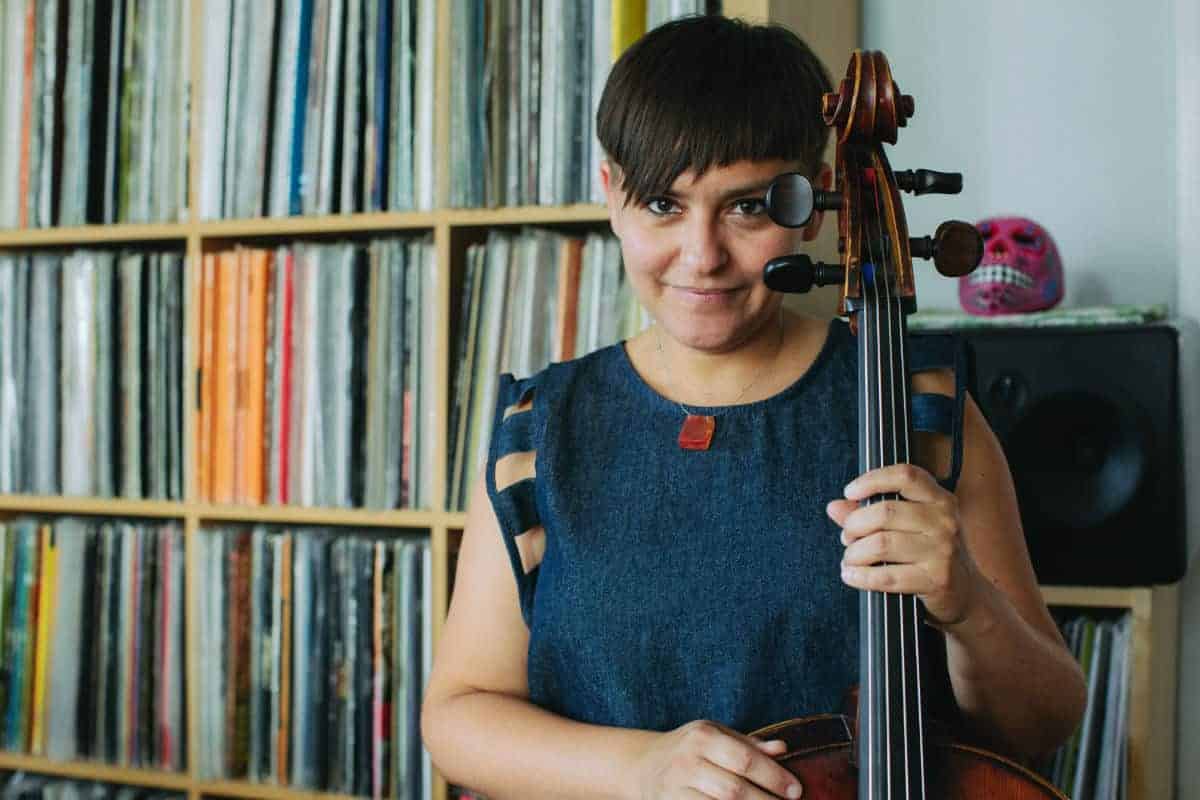 Cetilia’s childhood musical opportunities are a big reason why she works at Community MusicWorks, a neighborhood music school in Providence that’s its own mix of the nontraditional. “I am a product of a public school’s music program. That’s why I work where I work,” she says. “It was my savior.”

Cetilia’s interest in experimental music started at that Saturday program, too. “My teacher encouraged us to experiment,” she says. “We would just go crazy. She gave me the freedom that allowed me to experiment. To me it was a natural thing to do. I realized later you have to put in more focused practice to get even better at your instrument, but my heart was really into exploring other things.”

The sense that music goes far beyond black dots on a page is something she’s trying to introduce to the kids she works with now. “I want to get them acclimated to a different way of playing music and thinking about sound and space and the sounds around you,” she says. “It’s a much looser interpretation of what music really is.”

Cetilia put her own interest in experimentation on the back burner while attending Indiana University’s Jacobs School of Music. “They’re into contemporary music, but it’s more that you’re a performer and you have to master your instrument in order to play whatever music is in front of you,” she describes of her time there. “I was more interested in exploring my instrument as an extension of who I was, not just re-creating someone else’s vision.”

Of course, wanting to play conceptual music and getting experimental music gigs can be two different realities. In an effort to remain true to their mission, she and Mark started their own record label, Estuary Ltd., devoted solely to producing experimental music. “We try to release music that wouldn’t be released otherwise,” she says.

After artist residencies in Norway and the Netherlands, they landed in Providence because Mark came to Brown University to get his PhD, and the city has proven to be exactly the right spot for musical experimentation. “Providence is sort of the best place for us to be in making the music we care about,” she says. “It has a long-standing history of nonconformist musicians/artists living in and throwing shows in abandoned warehouses and such, so pretty much anything goes. That scene is changing a bit these days due to gentrification and the fact that Providence is also a transitory city for lots of kids on their way to New York, but there is always a handful of dedicated people that continue to present challenging shows, despite whatever obstacles.”