This is the story of two people who build mystical worlds from plywood, metaphor, and the electricity of collaboration. Megan and Murray McMillan construct sets in gritty, forgotten places, then stage and record performances that read like dreams. Their videos unspool inside art installations.

In the beginning—the late 1990s—Megan was a writer, and Murray was a sculptor. Now, they’re both more like multimedia producers—or kids building a treehouse to play in on a ridiculously sophisticated scale. “You taught me about narrative,” Murray says to Megan, “and I taught you about space.” 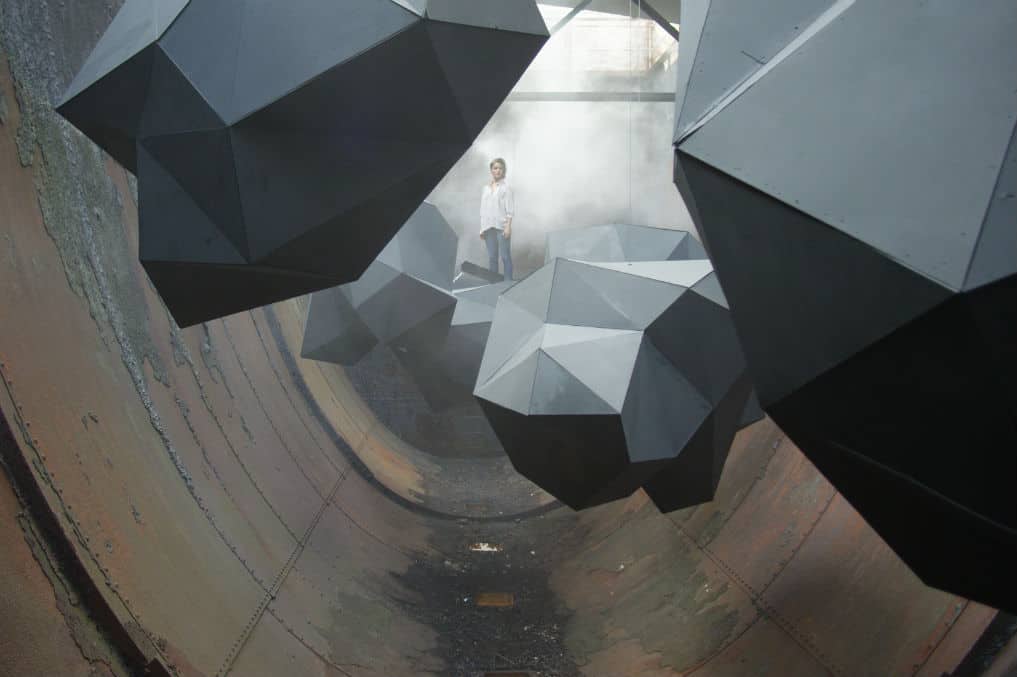 Murray and Megan McMillan, a still from Explode Every Day: An Inquiry into the Phenomena of Wonder, 2016, video. Photo by the artists

They’re sitting in their new studio, a carriage house behind the home they recently bought in Cranston, Rhode Island. The downstairs is crammed with a lawnmower, camera tracks, and brawny wooden boulders they made for Explode Every Day: An Inquiry into the Phenomena of Wonder, an exhibition at MASS MoCA that ran from May 2016 to March 2017. By this summer, it will be their fabrication space. Upstairs, the open door of the hayloft looks across treetops to Narragansett Bay. In six weeks, they say, the loft will be renovated into a state-of-the-art design studio. Upstairs, dreams will be plotted. Downstairs, they’ll be made real.

“Megan and Murray are constantly engaged with the notion of wonder, of time stopping and being in an in-between space,” says MASS MoCA curator Denise Markonish, who organized Explode Every Day. The couple’s ambitious installation for that show, In What Distant Sky, took four years to design and build. The piece began in a massive coal bin on the museum’s campus. “It was like being in a Richard Serra piece,” marvels Megan.

They’re drawn to settings crusty with history. For What Stands Between Us and the Sun (2010), they built an artificial lake inside an abandoned mill building in Central Falls, Rhode Island. This Land is a Ship at Sea (2015) unfolded in the catacombs of Fort Warren, an old fort and Civil War prison on Georges Island in Boston Harbor.

A place’s specific textures—rust, grime, seared wood—set the stage for their work. So do unlikely materials. The video installation What We Loved and Forgot (2010), in which people ritualistically construct giant daylilies, came about after a contractor’s young widow gave the couple some leftover industrial-grade yellow plastic. “She found out we were artists,” says Megan. “She said, ‘Use it to make something really beautiful.’ We didn’t know how to do that for a long time.” Then they thought of daylilies, whose blooms remain open for just a day, then wither and fall.

In that shoot, the McMillans turned the camera on their own process. The video follows a man as he walks past the flowers being assembled and into a space near where a woman makes sushi—the food that would feed the project’s cast and crew. “We try to make it great: great food, a fun party experience,” describes Megan of filming. “And we have life happening alongside these cinematic moments.” They always invite friends to play. “We like to work with people we know, to stitch their stories together,” says Megan. “We think of it as visual poetry.”

One friend, aerialist Thea Ulrich, performed without a safety harness in In What Distant Sky standing on a boulder that rose several stories. On the way up, she encountered a Japanese couple on a balcony making tea, played by Hirokazu and Hiroko Fukawa. Hirokazu was Murray’s first sculpture teacher. The piece required sprawling vision and exacting execution—a typical McMillan cocktail of creativity and limitation. 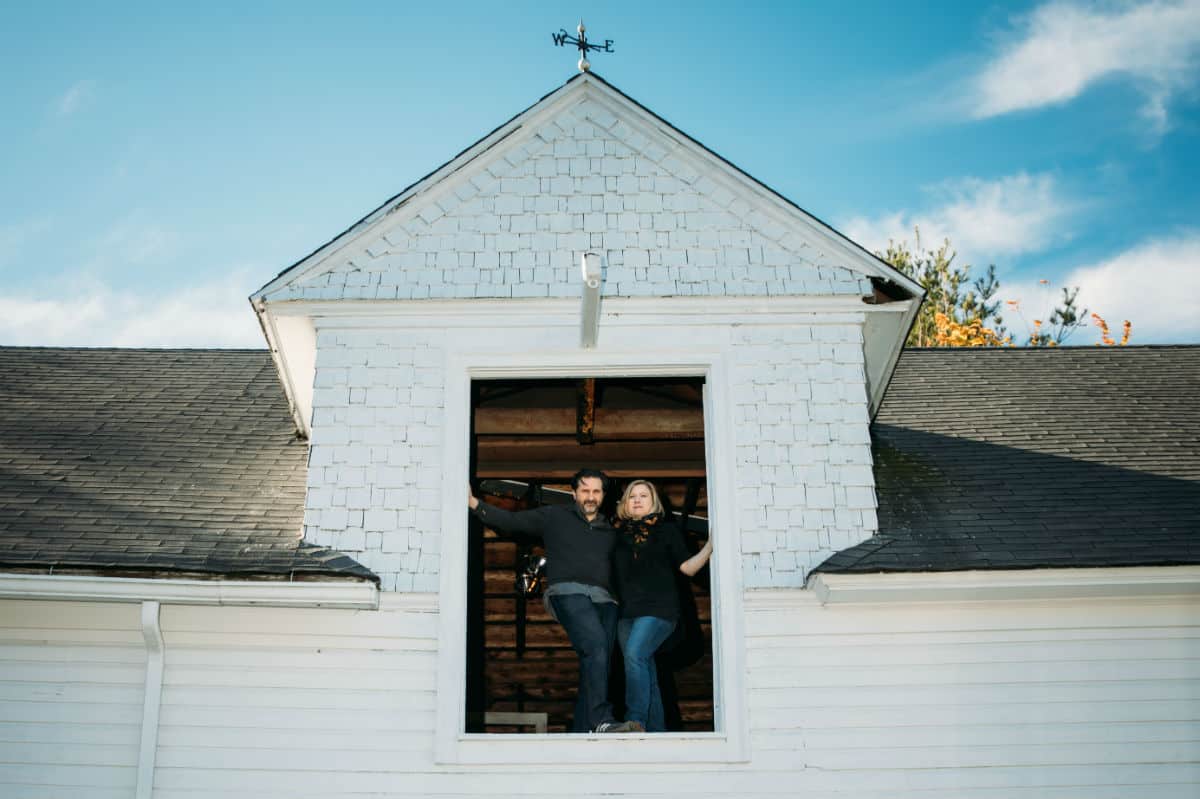 Murray and Megan McMillan, in their carriage house studio. Photo by Natasha Moustache

There’s a meant-to-be quality to the McMillans’ love story. The couple met growing up in Dallas and dated as teens. The romance sputtered when Murray went to college, but they reconnected and married young in 1997. Both were creatives: Megan edited poetry journals and played cello until Murray’s art invited her in. He’d tell her about his pieces, and she’d give him feedback. “Really good feedback,” Murray says, looking at his wife. “Then I realized there’s as much of you in this work as there is of me.”

“We realized quickly that to do the work we wanted to do, there wasn’t enough time to keep separate projects,” adds Megan.

At first, they moved frequently. In St. Louis, they found a dusty, unused auditorium in the local veterans’ hospital, and staged Channelbone (2007), a video in which veterans with paralysis in wheelchairs pull helium balloons and dancers tango on a high balance beam. They screened the video, its themes teetering between freedom and limitation, inside a fabricated whale’s skeleton.

The McMillans never intended to land in Rhode Island, but Murray was offered a teaching job at Roger Williams University. Megan teaches, too, at the School of the Museum of Fine Arts at Tufts University. Teaching fits in the same wide net of collaborative energy that kindles their work. In In What Distant Sky, Murray’s former teacher whacks rocks together to light a fire to warm the tea. “It’s also about sparking, banging rocks to create a catalyst energy,” says Megan. “That’s what teaching is. You have the fuel and someone gives you the spark.”

They love Rhode Island because the artist community here provides its own sparks. When they started constructing the boulders for In What Distant Sky, Barnaby Evans, who created WaterFire, a pageant of bonfires on barges in Providence’s rivers, offered them free fabrication space—a sizable donation. 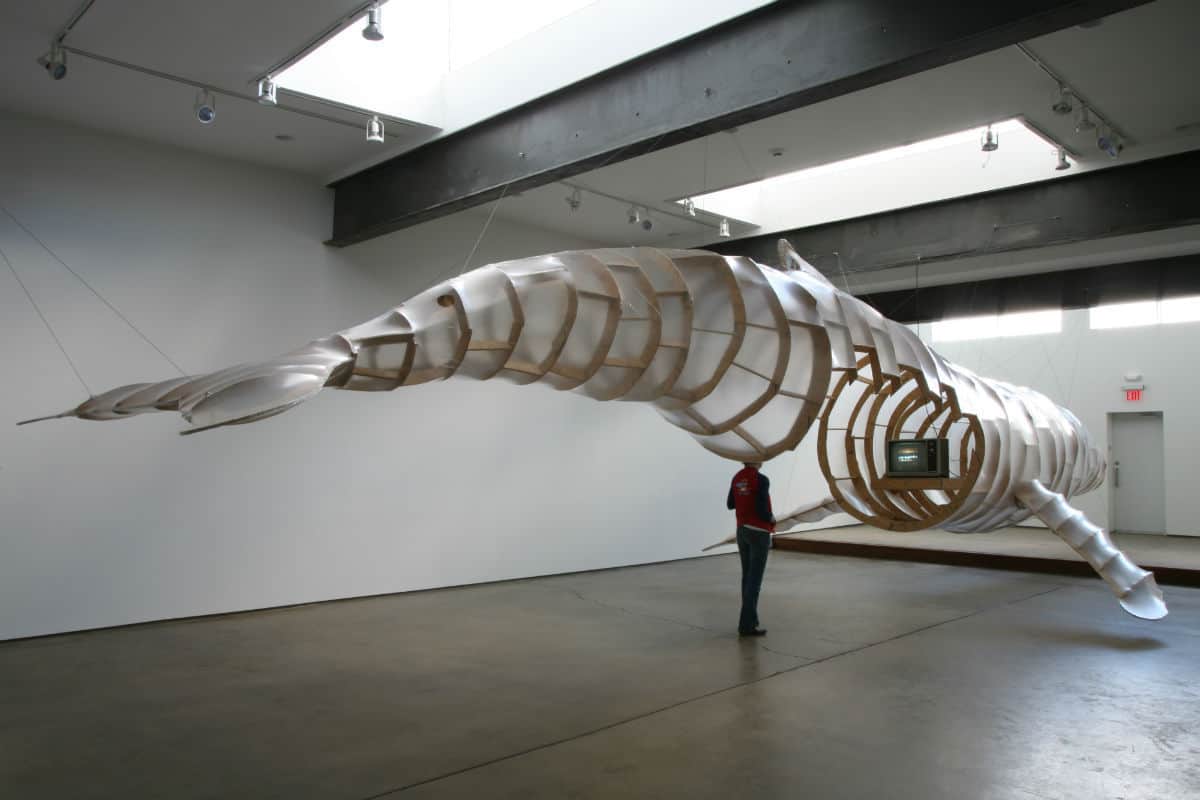 After collaborating as artists for 15 years, Megan and Murray started a new, familial enterprise. The arrival of sons Arlo, 5, and Jack, 1, prompted their move from Providence to Cranston. In Providence, the McMillans’ studio wasn’t nearby. Now that it’s just outside, they have more flexibility as artists and parents.

Their next project is home based. “We like the idea of embracing the studio as a limitation,” Murray explains. “What can we do right here that returns us to our roots?” Their plan—and who knows how closely they’ll follow it; they like to improvise with glitches that arise—involves a camera filming from a hoisted bucket, a fake landscape, the hayloft, and a sand pile.

The new piece has a smaller scale and a faster turnaround than recent projects, but there’s a new twist: Arlo will play a part. Megan has a picture of Murray overseeing construction at MASS MoCA with Arlo snuggled against him in a BabyBjörn baby carrier. Wrapping the kids into the work seems like a natural evolution: it syncs with their spirit of play, and with the family feeling they foster among their collaborators.

Children can be brilliantly creative, but they aren’t always the easiest or most willing coworkers. It’s the next added degree of difficulty for a pair of artists who thrive on a blend of comfort and complexity. “It has a lot to do with letting go of control,” admits Murray, the man who oversaw a project that hoisted high a harness-free aerialist on a wooden boulder. “I feel that’s what I need right now. I’ve had too much control.”