On the island of North Hero, Vermont, one turn off the main road, is an unassuming house with a sizeable garden. There is a bush bearing slender purple beans. There are fuzzy stalks of borage, with blue flowers that taste of cucumber. Plump tomatillos dangle from lush plants, their delicate husks turning from green to brown, becoming desiccated and lacy. Nearby is a flower patch, with blossoms in sunny yellow, salmon, pumpkin, and crimson.

“We planted all of this nasturtium last year,” says Aaron Josinsky, who stands between the raised beds in his garden wearing a boater hat and a short-sleeved button-up shirt, gesticulating in the direction of the flowers. “The leaves are delicious; the flowers are beautiful. You can ‘caperize’ the buds. We make nasturtium pesto and throw flowers all over it.” 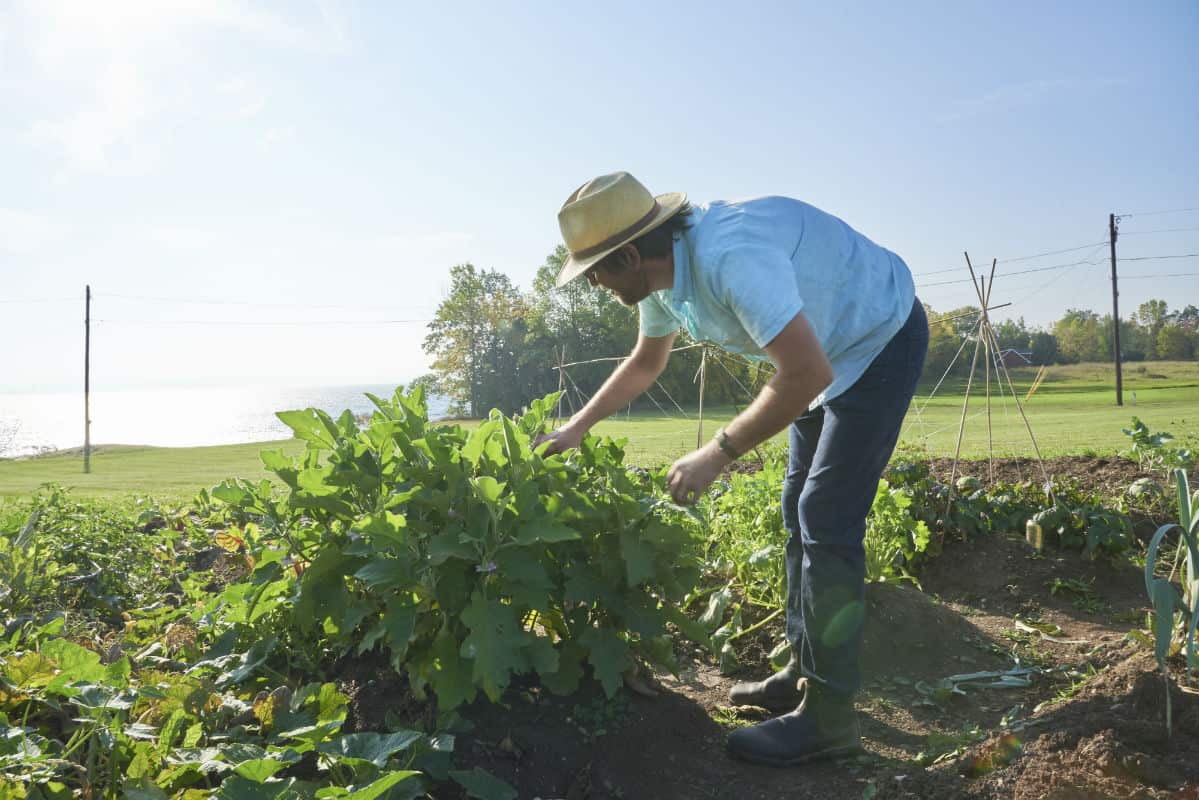 At Misery Loves Co. in Winooski, hungry diners can find handmade pasta tossed with that garden-fresh nasturtium pesto, served over a smear of Vermont ricotta and garnished with bright flower petals that Josinsky harvested that morning. The unassuming cook—he doesn’t like the word chef—co-owns the restaurant with his spouse, Laura Wade, and her brother, Nathaniel Wade. The trio made a name for themselves at Burlington’s Bluebird Tavern, where they specialized in bringing a bit of weird to a small-state restaurant scene that was otherwise somewhat bland, and a few years behind trend. There, they piled tender orange sea urchin atop scrambled eggs, quietly made their own charcuterie, and sent marrow bones leaking fat to customers who had never before scraped part of their meal from a cow’s shank.

In 2012, when the threesome moved Misery Loves Co. from a food truck into a brick-and-mortar location, they offered a mix of casual fare and eccentric dishes. The former included the Rough Francis, a fried chicken sandwich with hot sauce, blue cheese, and pickled celery. It was standard American in concept, and perfect down to the smallest detail in the execution. They also served percebes—alien-looking barnacles harvested on the Iberian coast—and coal-black spaghetti topped with Rhode Island squid, fried cauliflower, rings of hot pepper, and a sprinkling of bonito flakes that danced in the steam rising from the pasta and its sauce.

The following year, after a drive-by shooting in their neighborhood catalyzed them into action, the business partners moved from Winooski to the peaceful Lake Champlain islands, where fertile soil lends itself to apple orchards and farms. Outside of the Josinsky-Wade house (Nathaniel lives next door), they planted a few crops in raised beds. None of them expected the change of venue to affect Misery’s fare. But over time, as their garden beds multiplied, a flock of chickens materialized, and farmer-neighbors became close friends—and then perhaps a bit more like family—it did. Josinsky admits, “I don’t want to say it’s changed our cooking, but it has. The food is simpler. It’s like home cooking, but it’s more refined.”

The shift in focus is broader than what shows up on the plate. Asked about himself, Josinsky shows more interest in talking about his neighbor, Ben Pomykala—who moved home to Vermont to help his parents run the family farm. “They have a strawberry social and invite the whole island,” he says with a grin. Walking through the garden, he points out some sorrel that Eda—Josinsky and Laura Wade’s four-year-old daughter—loves to snack on. “She thinks it’s the best thing,” he proclaims, with a hint of pride.

Being a good husband and father, Josinsky suggests, is now his primary focus. So is being centered. While some chefs throw plates in the midst of a stressful conversation, Josinsky has been known to suggest taking a few deep breaths and imagining a sailboat bobbing up and down on blue water. Being healthy, he notes, matters more than creating the weirdest, hippest dish on the block.

Take the harvest crudités, for instance, which consists of a colorful pile of raw vegetables—slices of radish, red cabbage, romanesco cauliflower, cucumber, torn shiso leaves, sprigs of dill, purple beans, and those omnipresent nasturtium petals—topped with salsa verde and a little browned butter. The result is gorgeous, yet so unassuming, it’s daring. 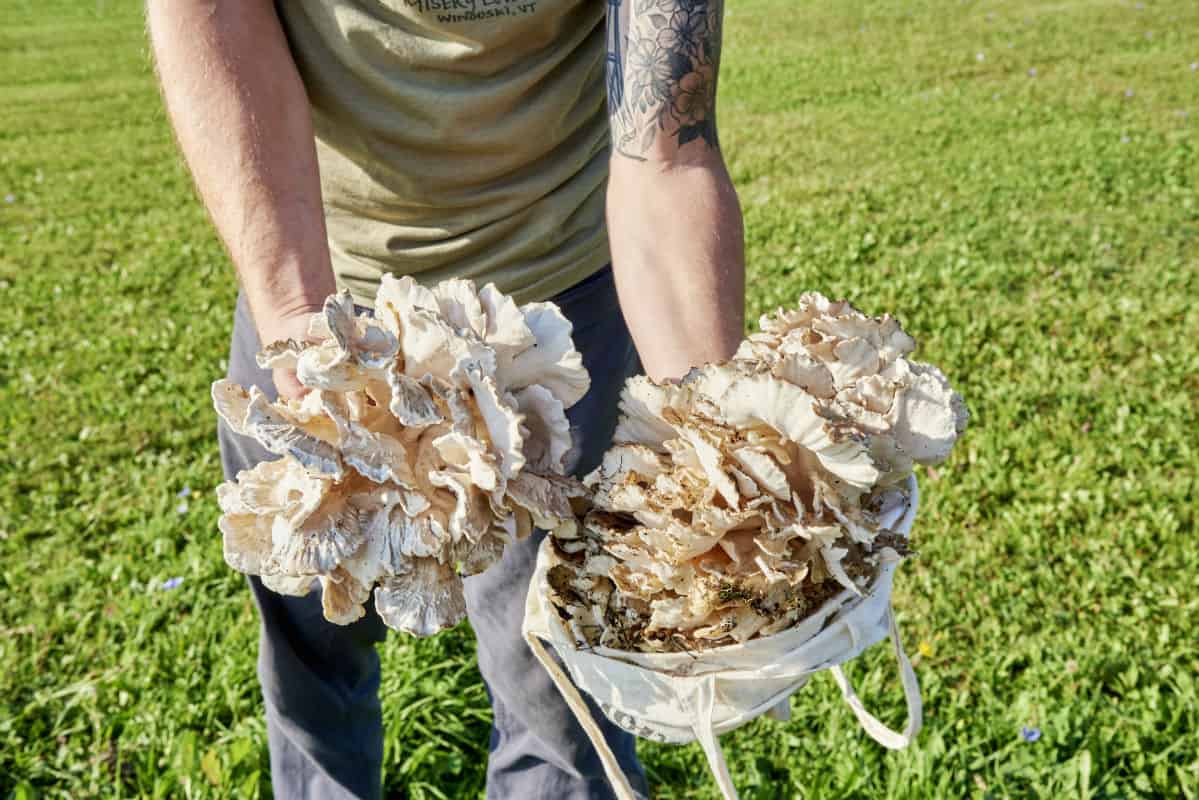 Nathaniel Wade shows off the hen of the wood mushrooms he foraged for Misery Loves Co. Photo by Dominic Perri

Vegetarians used to complain that Misery wasn’t for them. Perhaps they saw things like “veal heart” on the menu and ran. But, on one autumn day, a full eight of the menu’s 20 snacks, small plates, and entrées are free of meat or seafood. Why the shift? In part because growing vegetables—shepherding them from seed to sprout to fruit—has deepened Josinsky’s relationship with them. “I can read [vegetables] better these days. I can see them in multiple different realities at different times,” Josinsky explains. “It’s more intuitive. It’s more fluid.” When they do purchase animals, which they often buy whole or in larger primal cuts, they strive—as they always have—to use all of the bits, including the kidneys, heart, and testicles, the last of which might be served with a sauce made of eggs, as a bit of an anatomical joke.

These days, some of their meat comes from just down the road, where Amanda and Hugo Gervais operate Savage Gardens, a diversified 90-acre farm. There, two bull calves graze in a paddock, chewing placidly as Hugo goes about his chores. Tomorrow, one of the steers will go to slaughter, and half of the carcass will end up at Misery, where it will be turned into osso buco, tartare—laced with fish sauce and topped with a fluff of parmesan—and smoky kielbasa sausage.

As Josinsky talks about sourcing, Nathaniel Wade strides up with his dog and two bulging canvas bags. He opens them to show his brother-in-law the bounty therein, large clusters of hen-of-the-woods mushrooms. The culinary wheels start turning.

Unlike the chefs at many restaurants, even those who label themselves farm-to-table, the owners of Misery allow the daily catch—whether it’s seafood, recently slaughtered animals, or freshly picked veggies—to drive that evening’s menu. Now, Josinsky is dreaming up a dish that will use up the sausage from his last Savage Gardens veal calf; the pearl-gray mushrooms that Nathaniel foraged; some leeks from another nearby business, Pomykala Farm; and herbs from the plots in which he stands. 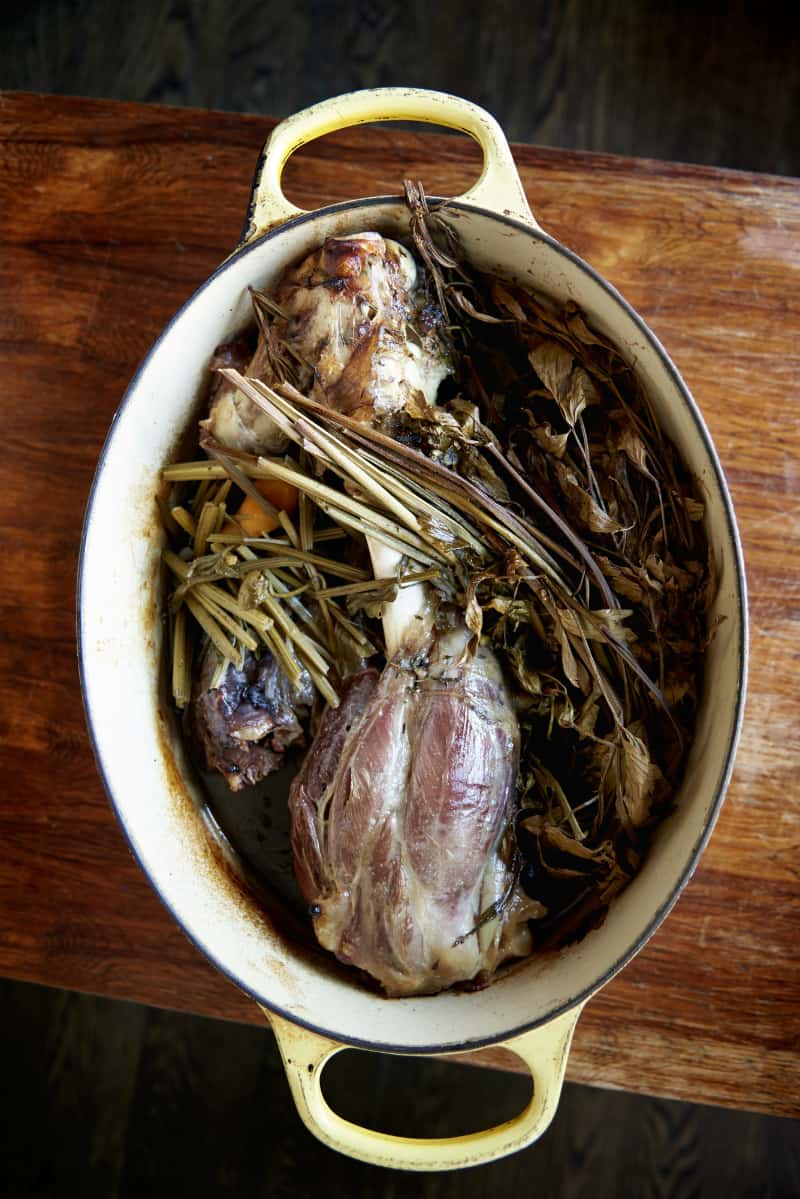 The Misery crew refers to their garden as In the Weeds Farm, a play on the term chefs use when they’re cooking as fast as they can and the orders are still piling up. Sitting at the restaurant’s counter, staring straight into the open kitchen, one never sees the cooks looking like they’re “in the weeds.” Wearing white coats and navy-blue aprons, each member of the team appears calm, focused, and pleased to be there.

At the restaurant, an hour before service, Nathaniel Wade steps over to the sound system and cranks up some Metallica. The cooks’ heads bob in time to the beat as they pick dill and parsley from their stems and pop the leaves into quart containers. Then, 30 minutes early, a customer walks in. Laura Wade hands her a menu, chats for a moment, then sidles over to change the music. A moment later, David Bowie’s bouncy “Modern Love” has replaced the heavy metal.

As the restaurant opens, plates begin to roll off the line. Josinsky is in the back, trusting his team to execute the dishes to spec. When an order comes in for the veal kielbasa, a cook pulls out a bunch of pint and quart containers and begins to build the dish. A cylinder of sausage goes on the flat top; he piles mushrooms and leeks in a small pan with a dollop of sauce made with butter, veal stock, dijon, tarragon, and Banyuls, adding some jellied meat stock before setting it over the flame. Halfway through cooking, he tosses the meat under the broiler. Pinches of herbs go into the pan.

When everything is done, the cook pours in a lick of sherry vinegar and spoons the mushrooms and leeks onto a blue-and-white plate in a rough circle. Seven thick slices of the veal sausage go on top, with pickled mustard seeds, broccoli flowers, and chives as garnish. The finishing touch? Red and yellow nasturtium petals from In the Weeds, of course.