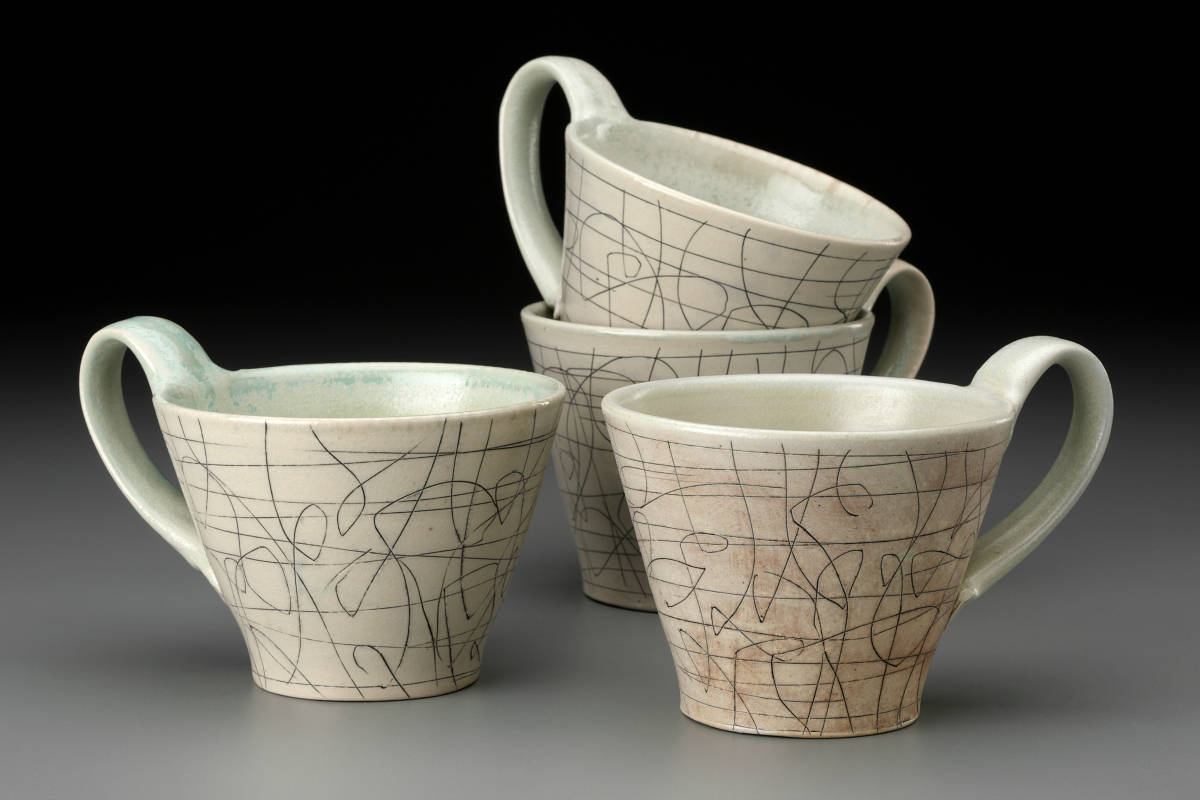 Michael McCarthy, a member of the Hilltown 6 Pottery Tour, uses an X-acto knife to create pottery that’s bold and functional.

Four times a year, Michael McCarthy hauls his pots from his studio in Florence, Massachusetts to his wood-fired kiln up in the hills. He says that the general rule when it comes to pottery is to “build a kiln bigger than you can use alone and invite friends.” It’s a community event, one in which an entire season’s worth of work takes its final form.

McCarthy will be showing the results of his most recent firing at the Hilltown 6 Pottery Tour, a weekend-long 45-mile radius event through the idyllic back road towns of Western Massachusetts. On this one weekend—an annual event—nine potters come out of the woodwork—or claywork rather—to showcase and discuss their work, and provide demonstrations in studios speckled throughout the hilltowns. This year, on July 29th and 30th, a sampling of McCarthy’s work, as well as the man himself, will be stationed at Sam Taylor’s studio, Dogbar Pottery, in Westhampton, Massachusetts. There you’ll find a smattering of cups, mugs, vases, flasks, platters, and covered jars colored largely in blues and decorated with delicate and repetitive lines, as well as refreshments from The Lone Wolf. 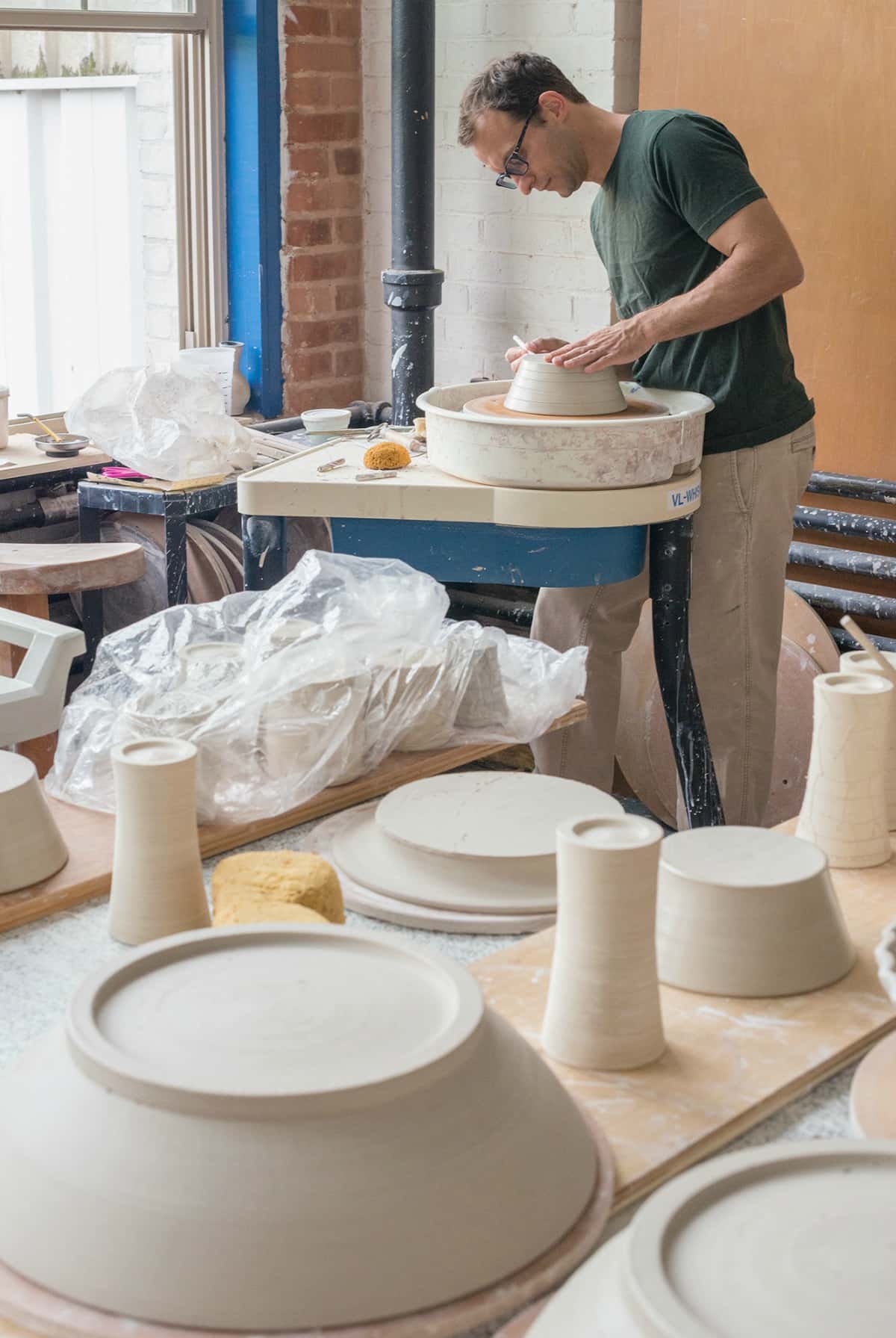 McCarthy’s work is elegant and simple. Where he diverges from the straightforward in his decoration of the surface, as he marks the clay with frenetic and methodical lines made with an X-acto knife. The work is unique and bold, as well as totally unobtrusive visually. It is also highly functional. His bottle forms, for instance, can be used for secondary fermentation of a batch of beer.

McCarthy tweaks his process each time he creates the hundreds of pots that will get fired each season. Right now, he’s interested in “grandma ware,” a sort of 1950s, weathered, and whitewashed look. To achieve that look, he lowered his kiln’s temperature and is now experimenting with colors accordingly. 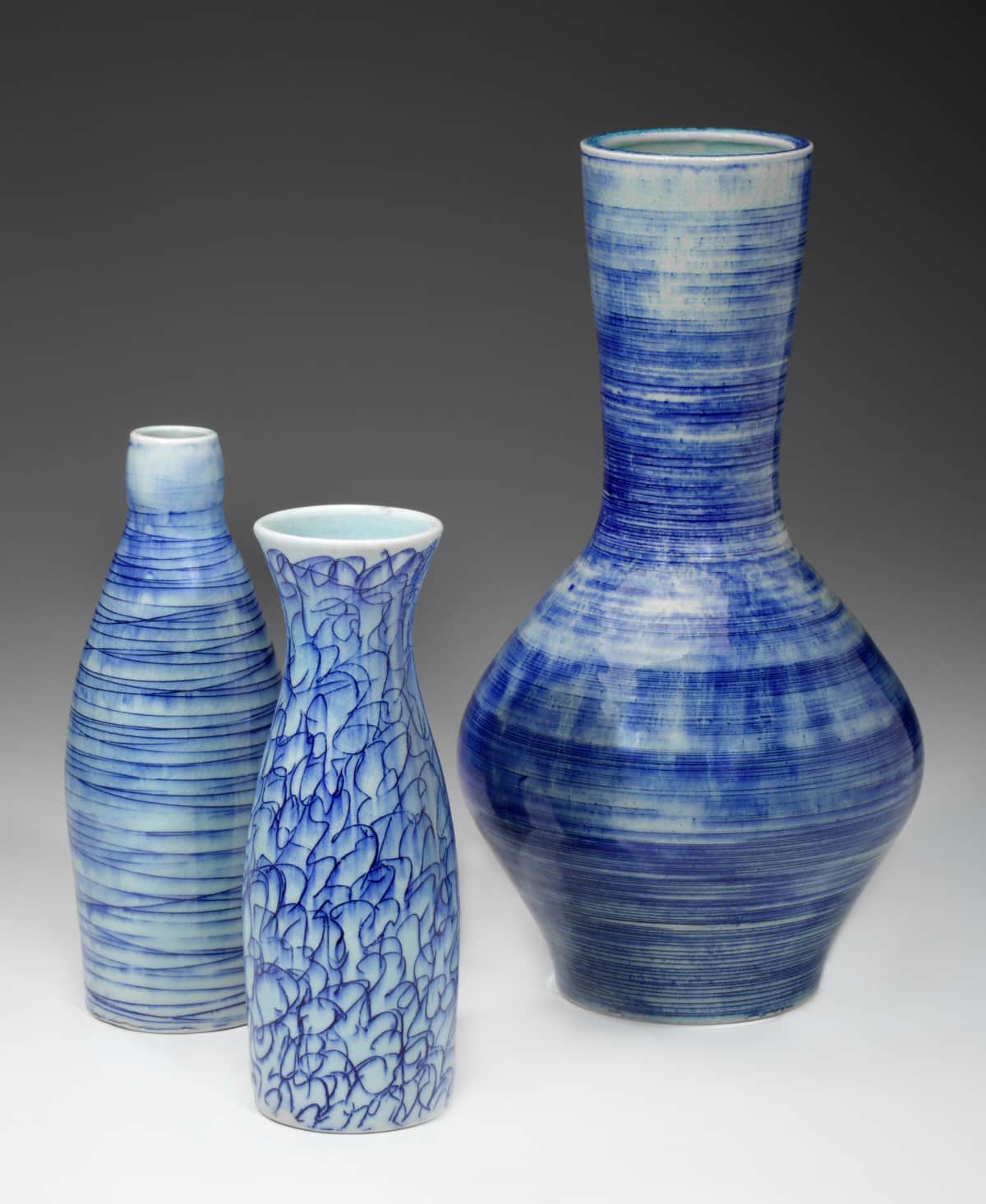 McCarthy uses the traditional method of firing his pots with wood and lives in a hilly bucolic town himself, but his work contrasts starkly with the back-to-nature scene one might associate with this lifestyle. His pots reflect behavioral patterns and repeating habits with their line work. Layers of straight rings around a cup reflect patterns of thought. He takes the earth’s material and shapes it into vessels that remind a viewer more of the machinations of the human mind than of the earth from which it comes. “I work with the most amorphous material but choose to define it,” he says, adding that he’s less rigid in his practice than he once was.

McCarthy moved to the area in 2000 to apprentice with Mark Shapiro, a veteran potter in Western Massachusetts. As an established potter now, McCarthy remembers when a teacher had to remind him that he was actually doing it, making pottery his life. He realized, having found himself in a valley rich in pottery and pottery aficionados, that he could work the way he wanted to work. “I stopped searching for a place. I had found it,” he says, and if you pick up a Hilltown 6 Pottery Tour Map, you’ll find it too, down a series of scenic and winding roads.