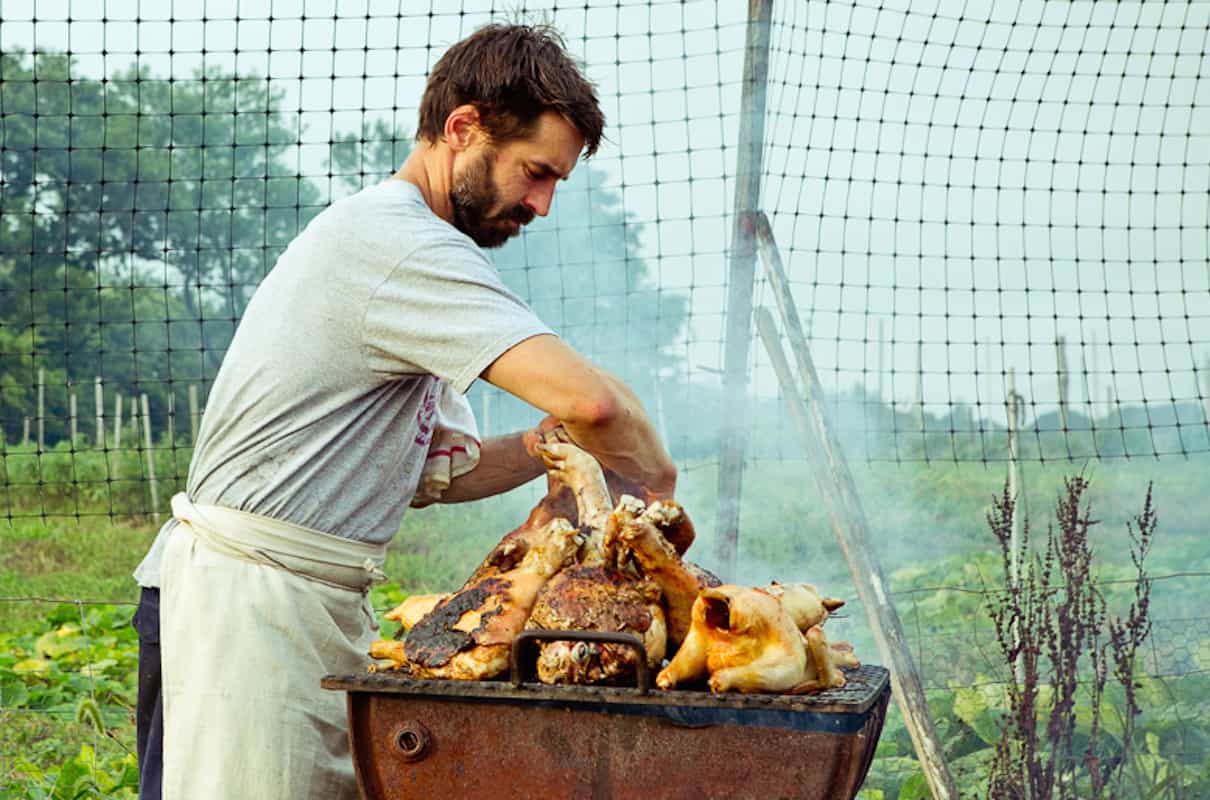 “I always like eating lobster,” Martha’s Vineyard-based chef and farmer Chris Fischer says, while standing over the large brick grill he built on his family’s five-acre Beetlebung Farm. “It reminds me of my dad.”

Fischer grew up year-round on the island, and early each spring he, his brother, and his father would set lobster pots on Menemsha Pond, in between Fischer’s hometown of Aquinnah and the tiny fishing village of Menemsha. 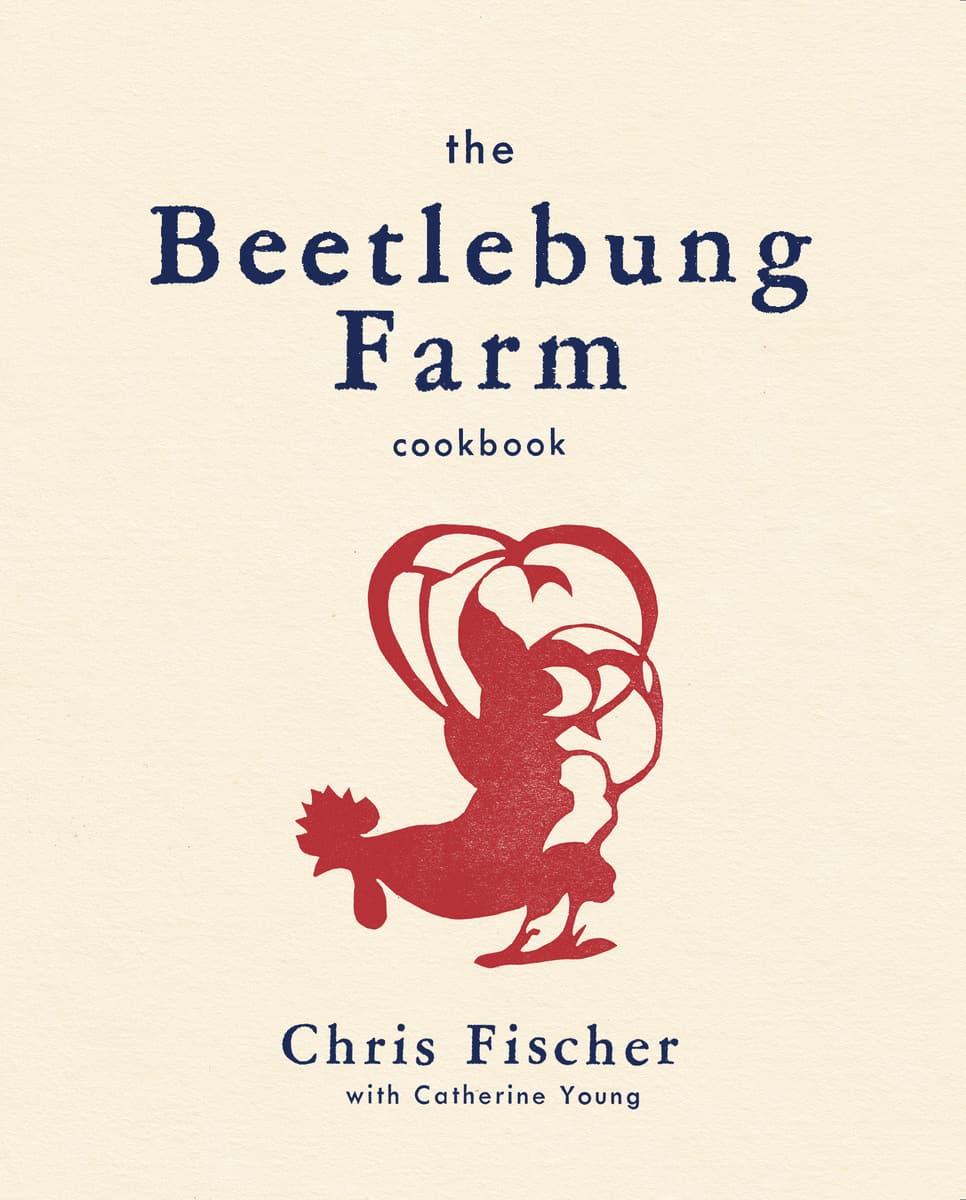 Courtesy of Little, Brown and Company

“There were rites of passage with it, as with anything else,” Fischer explains. “When we were little we carried the buckets. Then when we were bigger, we put the oar locks into the dinghy we took to the boat. When we were old enough, we hauled in the pots.”

On the way back to the house after a day out on the water, they always made one last stop. Fischer’s dad would pull the boat up to the Menemsha bike ferry dock and the boys would scour the underside for mussels. They’d scoop as many as they could into buckets before heading home, where they’d wash them and start getting ready for dinner.

If it was a special occasion, Fischer’s dad might cook the mussels with sausage or potatoes from the garden, but most nights he steamed them in a big pot with herbs and onions from out back. They’d eat outside at the picnic table, tossing the shells into a bucket. If lobster was on the menu, there was no bucket — the kids tossed the shells where they pleased — but there was melted butter, a lot of it. 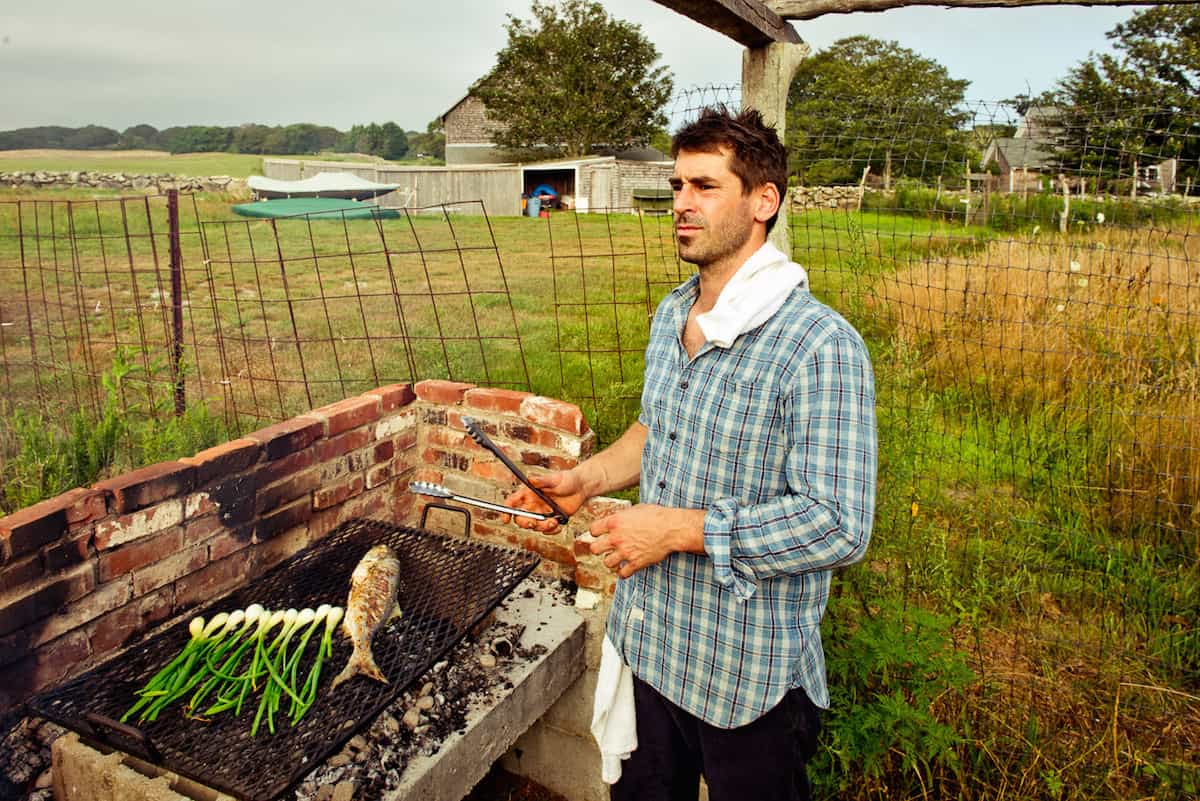 In his first cookbook, The Beetlebung Farm Cookbook, Fischer, who did stints at spots including Mario Batali’s Babbo and Alice Waters’ Rome Sustainable Food Project before moving back home to the Vineyard in 2010, pays homage to both childhood staples.

A recipe for steamed mussels gets an addition of fresh parsley, garlic, and just a pinch of crushed red pepper — a trick Fischer picked up from Batali. Be sure to pair it with a loaf of country bread. “Something with a really nice crust to get all the beautiful juices afterward,” says Fischer.

The Beetlebung Farm Cookbook version of lobster riffs on the family classic, quickly blanching the tails and claws, and then finishing them off in a pan with melted butter and serving them with toasted bread and more butter — this time a homemade tomato one with lemon and marjoram. In the book, Fischer notes that his favorite time to eat lobsters is in the fall, when they taste a bit wilder “than the sweet, softer-shelled summer” ones. Bon Appetit! 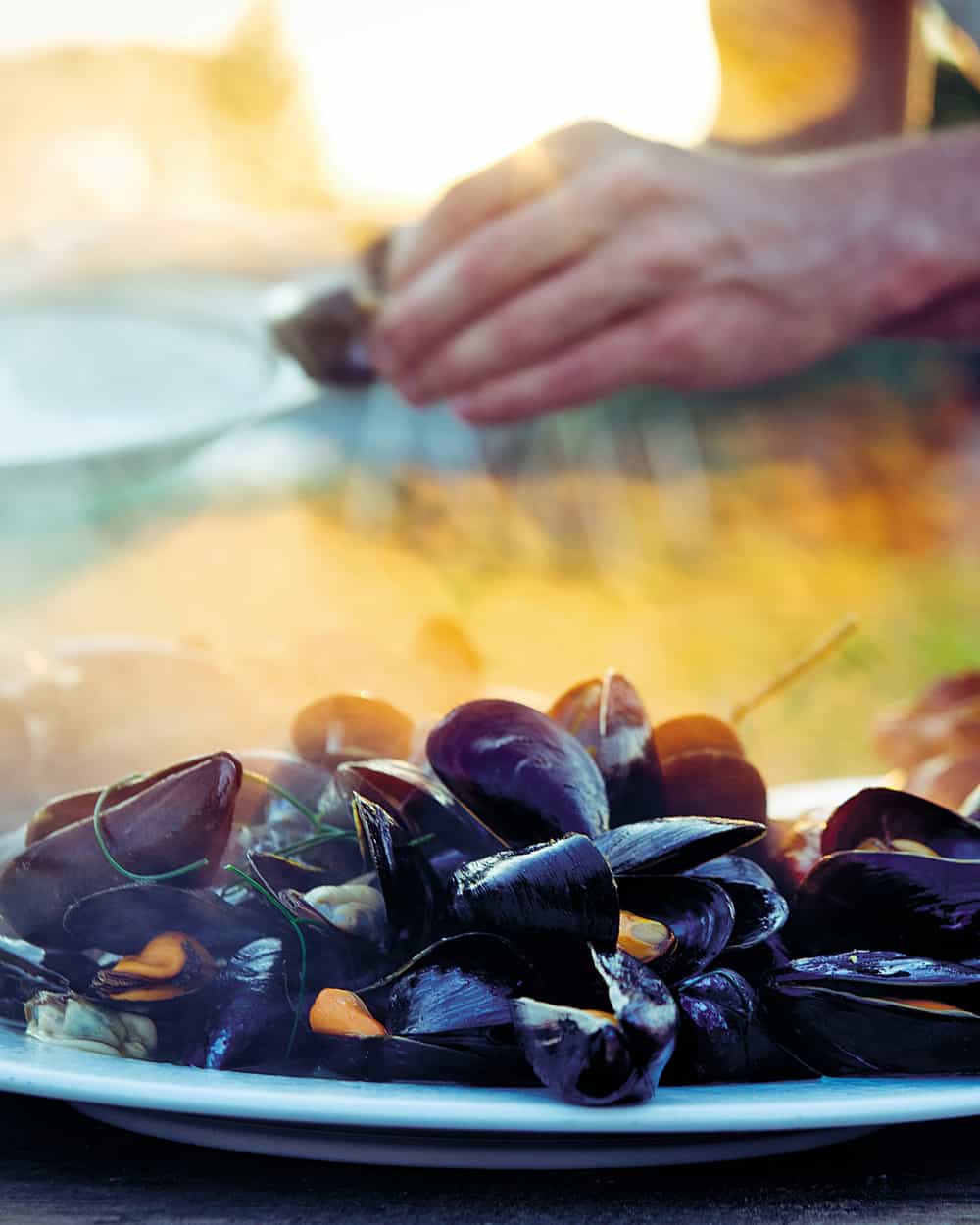 Mussels with Parsley and Garlic | Photo by Gabriela Herman

Mussels with Parsley and Garlic

Fill a small pot with water and bring to a boil over high heat. Add the parsley and blanch until it is bright green, about 1 minute. Drain and refresh in cold water. Puree in a blender with 1 cup water; reserve.

Put the mussels in a large pot. Add 1 cup of water, cover, and cook over high heat until the mussels open. Remove the pan from the heat, add the parsley puree, and stir to distribute.

Heat a skim of oil in a small skillet over medium-high heat. Add the garlic and crushed pepper. Toast the garlic, shaking the pan, until fragrant, 1 to 2 minutes. Season the garlic with salt and add it to the mussels. Stir, then spoon into bowls and serve with good bread. 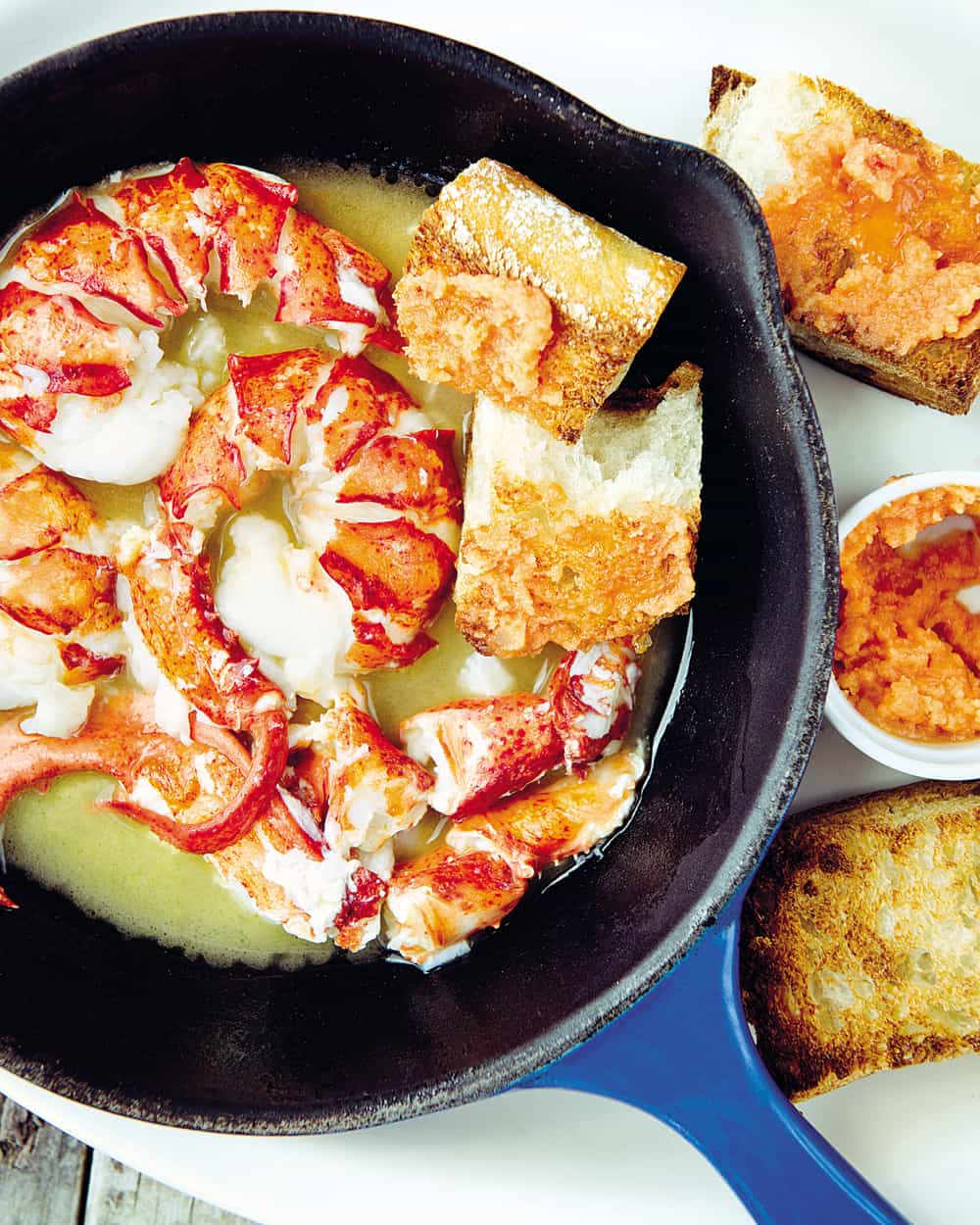 Bring a large pot of salted water to a boil and organize an ice bath. Separate the tails and claws from the lobsters’ bodies. Blanch the tails and claws for 5 minutes, then drain and put them into the ice bath to stop the cooking. Crack the shells and remove the meat. (This can be done several hours ahead; refrigerate until you are ready to make the pan-roast.)

Meanwhile, retrieve the roe (if there is any) from the bodies of the females by pulling out the dark green sack. Put the roe sacks in a small container and refrigerate. Freeze the lobster bodies to use for another purpose.

Combine the tomato paste and vinegar in a small pan and reduce over medium-high heat, stirring occasionally, until you are left with about 2 tablespoons of tomato concentrate. Allow the tomato to cool, then stir it into ½ cup of the softened butter. Add the marjoram, then season with salt and the juice from half a lemon. Taste the butter and adjust the seasoning if necessary with more salt and lemon juice. Pack the butter into ramekins, cover, and refrigerate.

Squeeze the roe, if you have it, from the sacks into a small bowl. Remove and discard the vein that runs down the back of the lobster tails and then cut the tails into ½-inch pieces. Tear the claws into pieces about the same size. Pull the tomato butter from the refrigerator.

Melt the remaining 4 tablespoons butter over very low heat in a skillet or flameproof serving dish large enough to hold all the lobster. Cut a lemon in quarters, squeeze the juice into the pan, and add the rinds. (If you want to, you can add a tablespoon of water — this helps to keep the butter from “breaking.”)