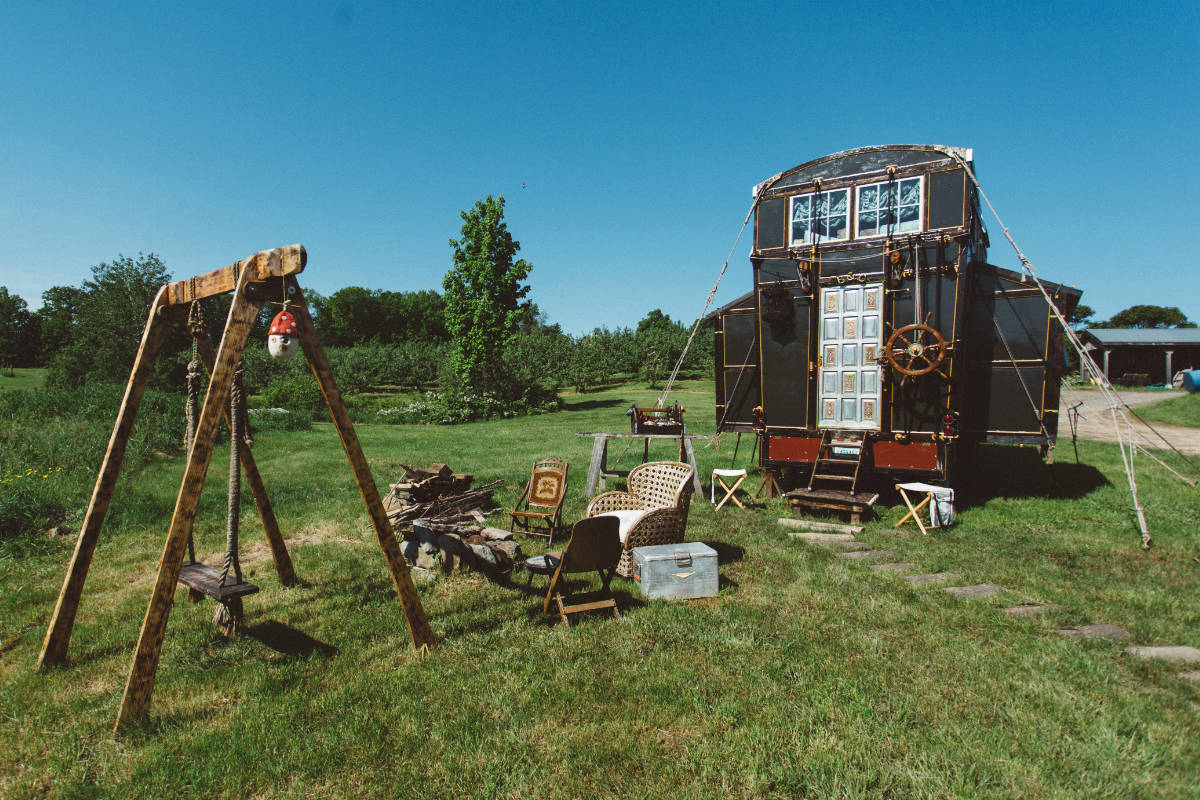 Chloe Barcelou and Brandon Batchelder turn movie-set scraps into a real-life tiny house on wheels where nothing isn’t adorable.

As any New Englander will recall, Boston circa January 2015 was a maze of snow. That’s where Chloe Barcelou, now 27, and Brandon Batchelder, now 36, were housesitting—living for free in exchange for caretaking and renovating. But under that blanket of snow, they were also hatching a plan—and trying to build something in another friend’s backyard, under a massive system of tarps. It looked weird. Weird enough that one morning, the building inspector trampled through the 4 ft. deep drifts to find out just what the heck was going on back there.

“This guy shows up and our hearts start beating really fast,” Barcelou recalls. “He’s all, ‘What are you building here?’ I think he thought we were building a shed or something we weren’t supposed to.” But it was nothing nearly so prosaic.

While small dwellings are nothing new, the cult of very, very small homes has been heating up exponentially in the past decade or so. With an emphasis on environmentally sustainable living and an interest in minimalism (hello, Marie Kondo), teeny-tiny micro homes are having a moment—kind of a long moment. And a tiny house (a particularly cunning one, at that) was what was developing under those tarps.

But the building inspector had never heard of them. “We’re like, ‘Oh, we get this guy,’” Barcelou sighs. “He walks in all stern, but then as Brandon was giving him the tour and explaining how everything worked, he wandered over to the ship’s wheel.” (Yes, there’s a ship’s wheel on the outside of the house.) “It’s what we use to hoist the roof.” (The roof gets hoisted. This is not your ordinary tiny house.) “And as Brandon was saying, ‘It’s kind of an . . . invention,’ the stern building inspector got a faraway smile on his face and replied, ‘It’s an adventure.’”

A cinematic adventure, at that. This tiny house (now parked on a remote farm in New Hampshire, not very far from where Barcelou and Batchelder met seven years ago) is one that grew out of the movies, quite literally. Both are film set designers, and were working on a movie that winter in Boston: Aimy in a Cage, starring Crispin Glover. “I’d built up a photography portfolio over the years, and got an email one day asking if I’d ever been involved in making a film,” Barcelou says. She hadn’t—but she didn’t let that stop her. “That was when we realized it was something we could do.” 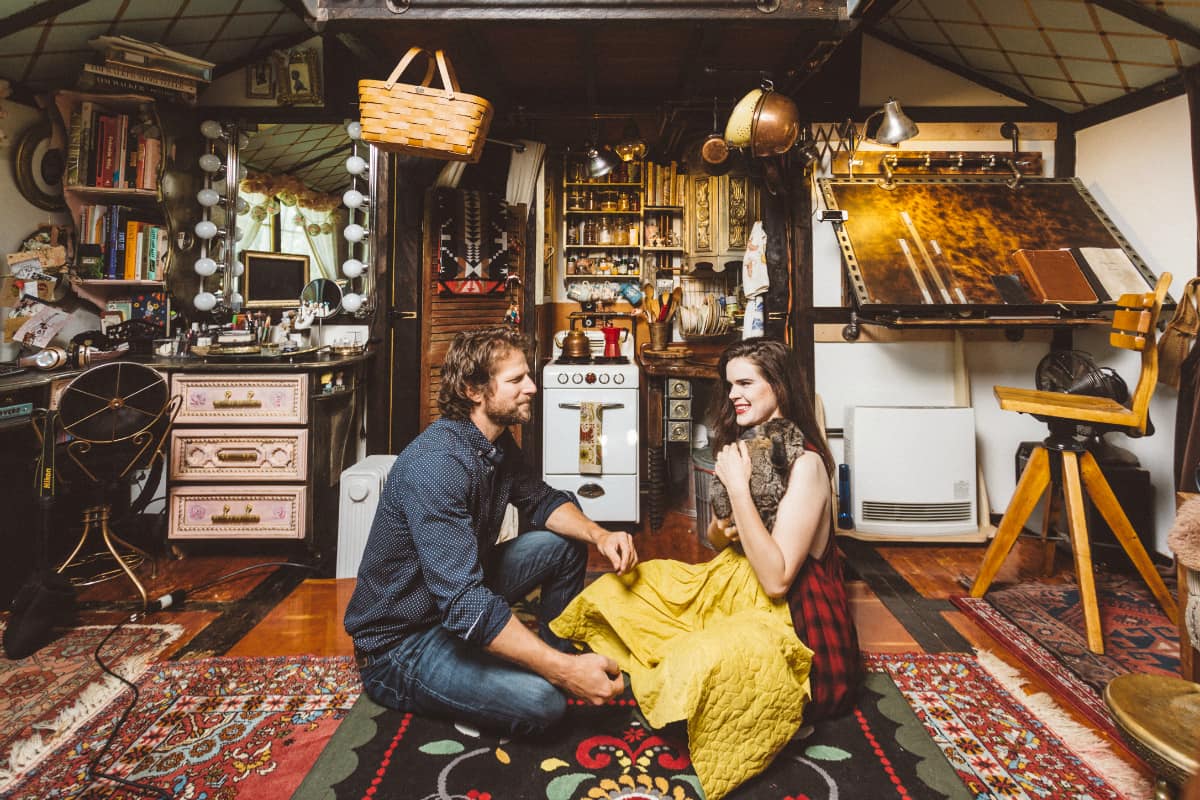 Batchelder and Barcelou at home with Cosmos, the rabbit. Photo by Chris Saunders

Aimy in a Cage was the first film of their homegrown production company, B&C Productions, which has since produced two other films, with more in the works. It was when they broke down that first film set and found themselves with a lot of leftover two-by-fours that Barcelou had an idea. Why not build a tiny home, on wheels, that they could take around the country where the film jobs were? “And as this came into focus, we were like, ‘Oh, we can make this a portfolio piece,’” she says.

And it is. All black, with ornately stenciled steps leading up to a steel-blue, elaborately carved door, the house has an arresting presence. It brings to mind a nineteenth-century stagecoach, or a peddler’s wagon. Something out of Charles Dickens, or Lewis Carroll, or . . . something out of a movie.

It may be tiny, but it’s decidedly a home, with wooden pavers setting a walkway up to the stenciled staircase, and a swing set (which Batchelder made for Barcelou) sitting in the yard. On a basic flatbed, with nothing but two-by-fours glued together to make extra-long beams, they’ve constructed what Batchelder calls a hybrid timber frame house reminiscent of a steamer trunk, a steam engine train, or maybe simply something steampunk. Collapsed, it’s a mere 12.5 × 8.5 × 18 ft., but when parked, it expands like a pop-up camper via the ship’s wheel and pulleys that entranced the building inspector.

Opening the door is like opening a trunk full of treasures: it’s full of old Persian rugs, diaphanous curtains, antique chandeliers. Shabbily bohemian, the space feels riotous and kaleidoscopic, but care has gone into curating it. “When we moved in, we got rid of pretty much everything that wasn’t adorable,” admits Barcelou. Everything left behind is there because they want it, right down to the tins holding their tea leaves. It’s technically one room, but a person lying in the surprisingly airy-feeling loft bed can’t see someone sitting below in the living area, and vice versa; careful planning went into the architecture, and it has paid off. Not that they consider it finished. “Someday we’ll have a little fence—dare I say a picket fence?—and real stones in the walkway,” Barcelou says. “And eventually when we move into our real house, we’ll have it as a guest house, or use it as an art studio, or whatever. But we would always have the tiny house.” 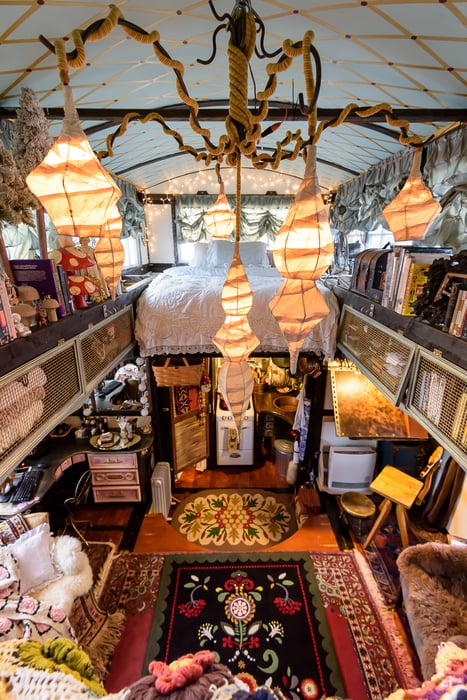 Nearly everything in the house is salvaged and reimagined. photo by Chris Saunders

They did it on a shoestring, finding scrap around in dumps and thrift stores and salvage yards, and that’s a huge part of the point for them. “Our rent is hardly anything and our cost of living is really low, so we’re able to take jobs that we care about,” says Barcelou. It’s also good practice. For their work as set designers, they’re asked to create entire worlds on minuscule budgets. “‘Can you make something that’s totally out of this world, that would not exist on Earth, that aliens built for . . . three thousand dollars?’” Barcelou throws her hands in the air. “And we’re like, ‘Okay! Sure.’”

That resourcefulness is their secret weapon. Barcelou’s other job is fashion editor at New Hampshire Magazine, a role she created out of thin air. “It’s a bit of an oxymoron,” she admits, laughing, glancing down at her muck boots. “Still. I was like, ‘They need a fashion editor.’” She smiles winningly. One can imagine how she pitched it. “There’s lots of cool stores here! They need advertising! I figured, if you build it, they will come.”

That same attitude goes into their production company—and into the tiny house. When they can’t afford to do it quite they way they want to, they find another way. Barcelou hand-painted the latticework ceiling. Batchelder created shelving out of repurposed chicken wire. Salvaged cabinetry became sinks, cabinets, desks. “Pretty much everything in this house is salvaged,” Barcelou says.

“The shower is all scrap metal,” Batchelder adds. A discarded Crock-Pot lid acts as a porthole in the shower door. “And this light”—says Barcelou, pointing to the antique chandelier that helps give the main living space its vintage, bohemian vibe—“We were actually looking for metal for our shower, and I found this at the junkyard for five bucks. I knew right away it would be perfect.”

“The space underneath the floor is future deck storage,” says Batchelder. “The floor of the trailer is a hollow cavity, about a foot deep.”

“So when we park, we’ll be able to pull out a deck,” Barcelou continues. “And it’ll have a little pergola, and that’ll make it three seasons.”

“Four,” Batchelder corrects. “I want to put a little woodstove out there, too. That will double our living space.”

Also in that hollow cavity happens to be a rather large rabbit hopping around. That’s right: a rabbit. “All his stuff is right here,” Batchelder says, lifting a floorboard to expose a litter box in one corner and food and water dishes in the other. Two holes in a raised platform allow Cosmos (the rabbit) to enter and exit at will. “He’s like our kid,” Batchelder says fondly. 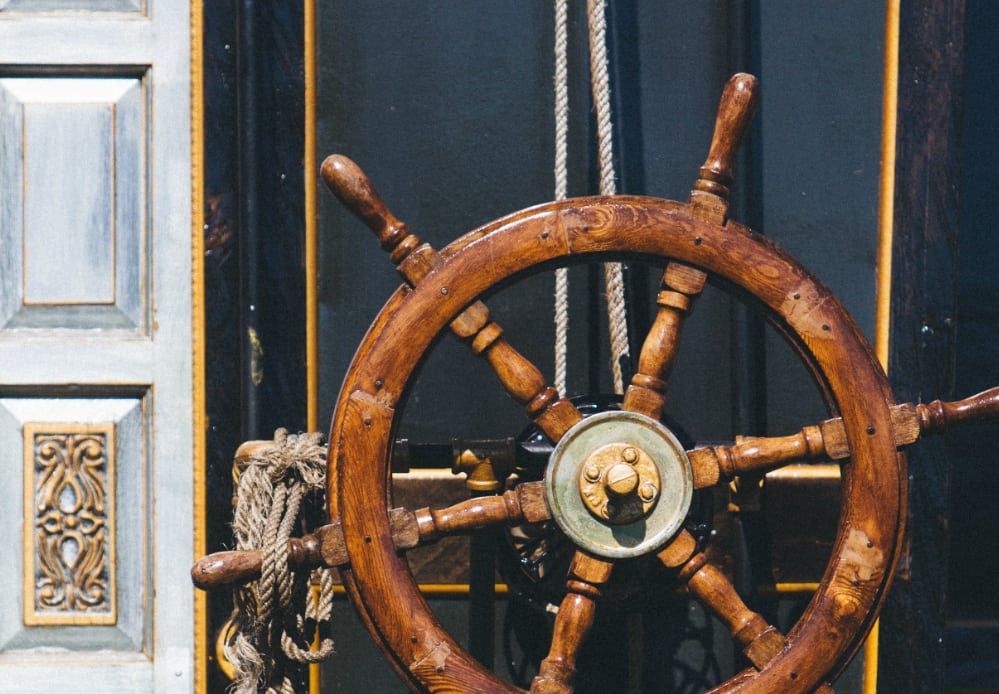 A vintage ship’s wheel raises and lowers the roof. Photo by Chris Saunders

It’s almost like Barcelou and Batchelder are playing house, except there’s nothing imaginary here. It’s why Barcelou bristles a little when someone describes the tiny house as steampunk. “Typical steampunk things are pretend. They’re water guns made to look like ray guns,” she points out. But turn that ship’s wheel, for example, and a system of black metal pipes really does lift the roof right off the frame. This summer, they started upgrading the roof with aluminum panels, finished to look like weathered copper. At some point they plan to surround the house with a fire cage of metal rods and cables—not because it will look fierce (although it will), but because a lone dwelling in the middle of a field is susceptible to lightning. It might seem ironic, given that Batchelder and Barcelou are paid to create fake worlds, but when it comes to this house, it’s all legit: everything works, and everything has a purpose. “Nothing here is just for show,” says Barcelou.

There have been several offers to buy the tiny house; Batchelder and Barcelou have turned them all down. “It’s not for sale,” Barcelou says definitively. “It’s irreplaceable,” Batchelder agrees. They give away design ideas, however, and might be persuaded to build similar tiny houses for others. After all, they understand people’s longings. “There’s a whole thing about not needing so much space, getting outside more, not being a slave to a mortgage,” says Batchelder. “But I think deeper than that is solving your problems creatively.”

Living in a tiny house has its own issues, of course. “It’s not necessarily easier than living in a regular house,” says Barcelou. “There’s maintenance and things that have to be done. I mean, we have to compost the toilet.” But when Barcelou and Batchelder (and Cosmos) decide they want to move on to greener pastures, they get to pull up the actual stakes holding their tiny house to the ground, hook the flatbed to a truck, and—just like that—they’re off. “This has given us an enormous amount of freedom,” says Barcelou, looking at Batchelder and smiling. “It’s liberating.”