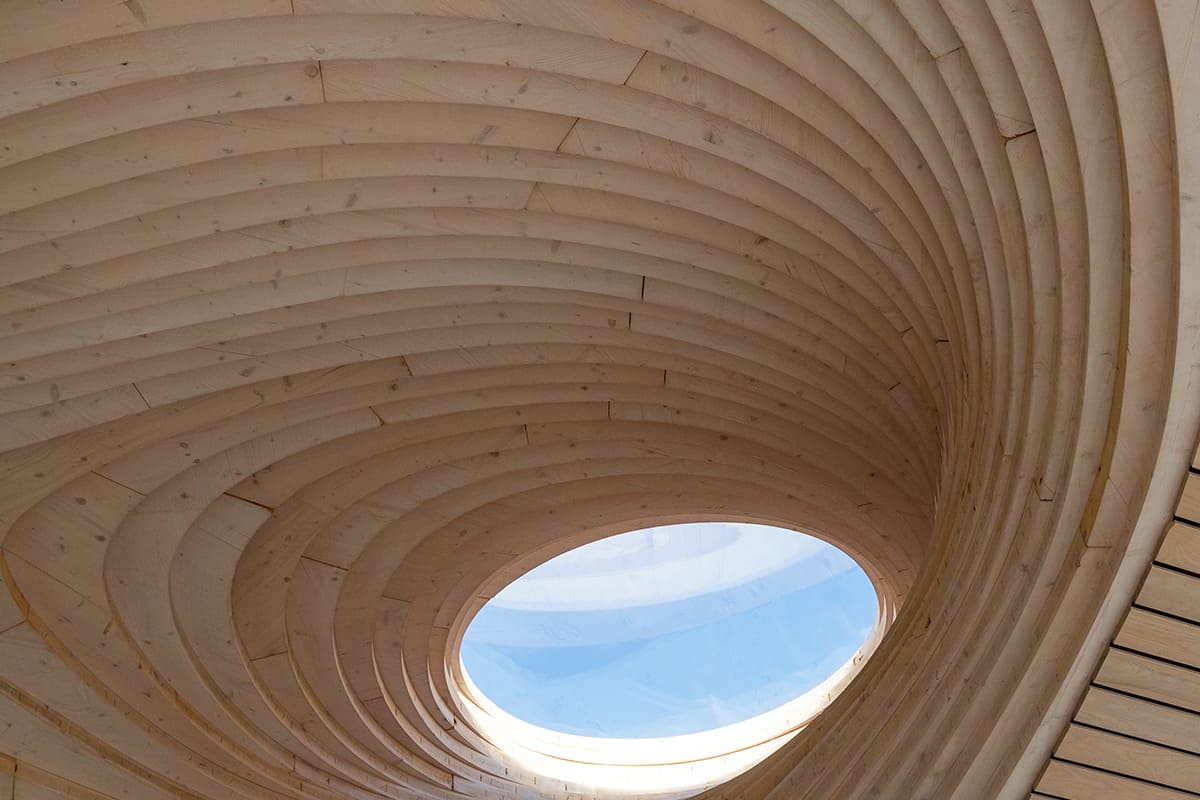 “It’s so fun to be on that carousel!” exclaims Alan Organschi. The carousel is the focal point of a sliver of parkway along the Mill River in Stamford, Connecticut. After winning a commission in open competition, Organschi and his wife and partner, Elizabeth Gray, designed what they consider an “urban porch” that leads to a classic carousel. The ride’s surrounding structure, in its use of materials and geometry, suggests an inviting woodland, but “what is really celebratory is the cupola above the merry-go-round itself,” says Organschi. 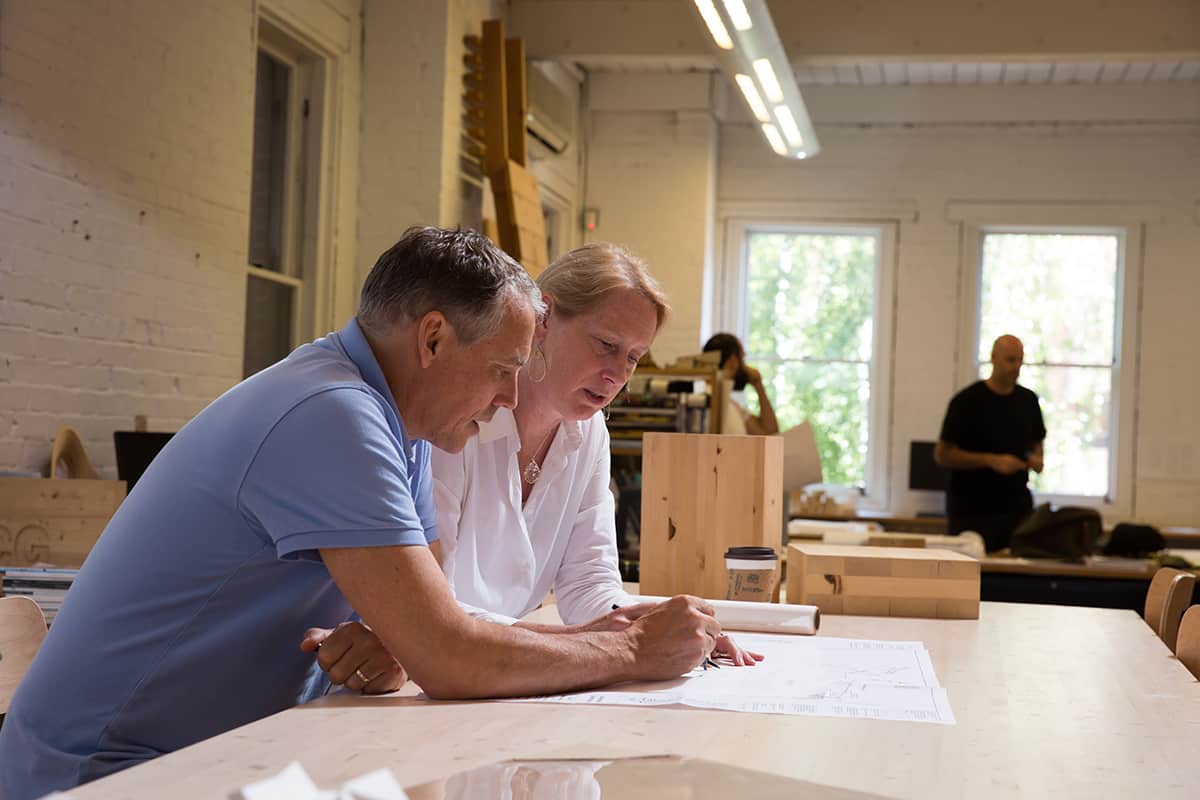 Born, bred, and based in Connecticut, New Haven architects Gray and Organschi have shown global reach in their interests, efforts, and influence. They met at Yale in 1985, a period when, Organschi remembers, “architects were interested in image and paper architecture, and there wasn’t a lot of building going on. We were hungry to learn about the relationship between building and construction and what our métier was really going to be. Our relationship started around that intense experience of architecture school. You’re in it and that’s how you think and talk.”

“I think when we got to know each other at Yale, we were loving the experience of being in buildings and understanding how they were made,” says Gray. “We really share a passion for experiencing buildings and materials.”

That passion, what Gray calls “the romance of architecture,” has colored their relationship and projects as they explore specific problems, always with a sense of a larger responsibility to the world.

The couple has traveled extensively, opening doors for each other. Gray did research in Asia, where, Organschi says, “I had my eyes blown open.” Organschi worked in Germany following the fall of the Berlin Wall, where Gray remembers “educating ourselves about how the city was organized and what was going on neighborhood by neighborhood in response to the wall coming down.”

They were impressed with the possibilities, and especially with the community’s involvement—a lesson that has stayed with them. “The manifestations of culture through architecture and politics and society has driven both of us,” says Organschi.

The disappointment of the Berlin building boom brought the bitter realization that, as Organschi puts it, “capital moves a lot more quickly than ideas.” That awareness, as well as the stratification of trades that didn’t allow for the integration of design and craft, brought them back to New Haven. “We were trying to decide what the perfect small, affordable, creative city was for us,” recalls Gray, “and we realized that we were here, and that this was a really good place.” 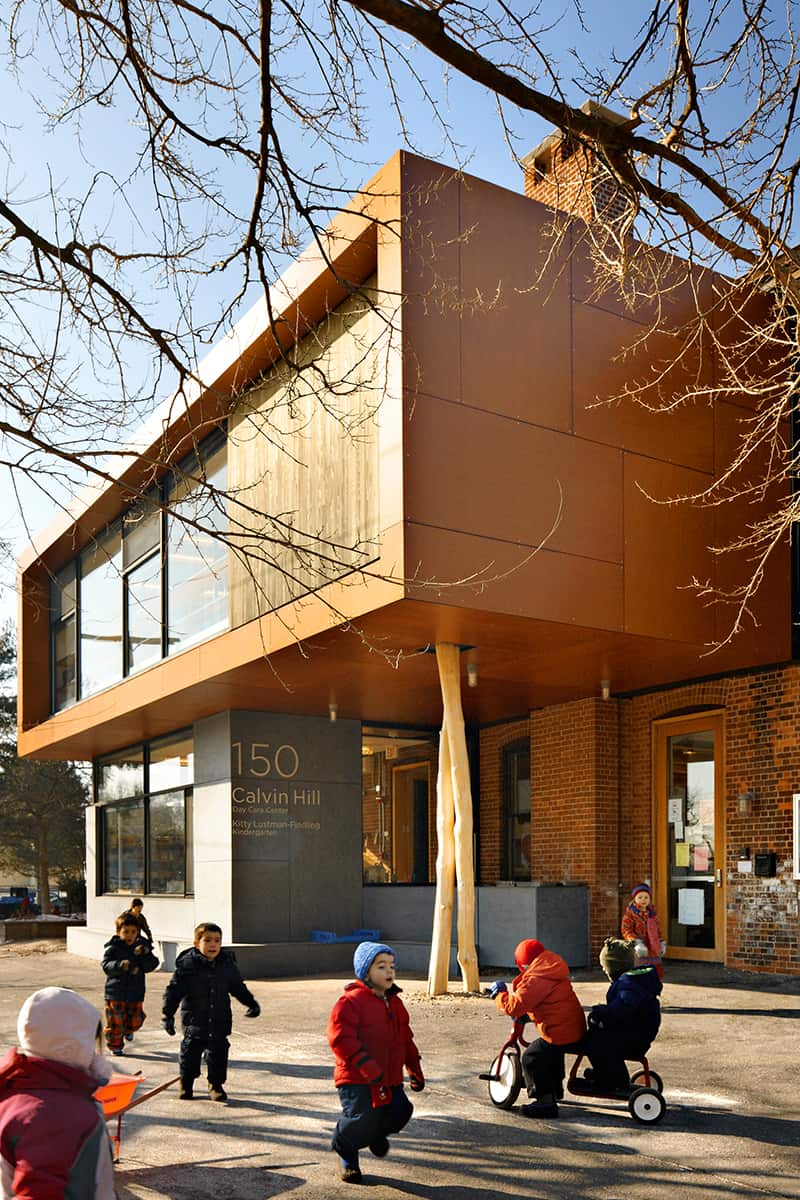 It was a place where they could establish a family and a firm, Gray Organschi Architecture, as well as have an adjoining fabrication studio—and where they could attend to an intellectually adventurous practice, augmented by teaching opportunities, initially at Wesleyan and currently at Yale. “I think we were always inclined to be a design-build enterprise,” says Organschi, who was an accomplished cabinetmaker before becoming an architect.

Gray worked briefly as a carpenter, but was always sewing and making things, and has an abiding interest in material culture. “I think we come at the built environment from these different ends of things,”—her handiwork and his woodworking—“which are unfortunately gendered, but that’s just the way it happens to be,” she says thoughtfully.

“We did execute our own designs, and having that skill set allowed us to realize designs that were less conventional,” she continues. “It was that extra piece that felt essential to both of us,” Organschi agrees.

Most of their projects so far have been in New England. They have designed houses in challenging settings, made clever commercial adaptations, and constructed thoughtful institutional buildings. Bridges play a recurring role. They are currently working on a house for two artists in Kyoto, Japan, significantly extending their reach. But their signature strengths—their involvement with community, their concern for the environment, and their trust that what Gray calls “design love” can transform experience and change expectations—are evident in two schools at opposite ends of New Haven.

Calvin Hill, in the East Rock end of New Haven, was an early project for the firm. An addition to their son’s day-care facility, it was done on a tight budget within an even tighter time frame. It is a deceptively simple addition. “All it is is a big wooden box on a couple of trees,” says Organschi—those trees being two white oaks that he harvested, stripped, and made into columns holding up the cantilever.

“There’s a kind of theater and joy and whimsy to it,” says Gray.

The play of a rectilinear cantilevered volume seemingly held up on playful posts, the window as a lens on the landscape, the light-filled creative spaces, and the idea of architecture as a way of shaping experience—all present at Calvin Hill—were brought into a much more complex project: Common Ground. 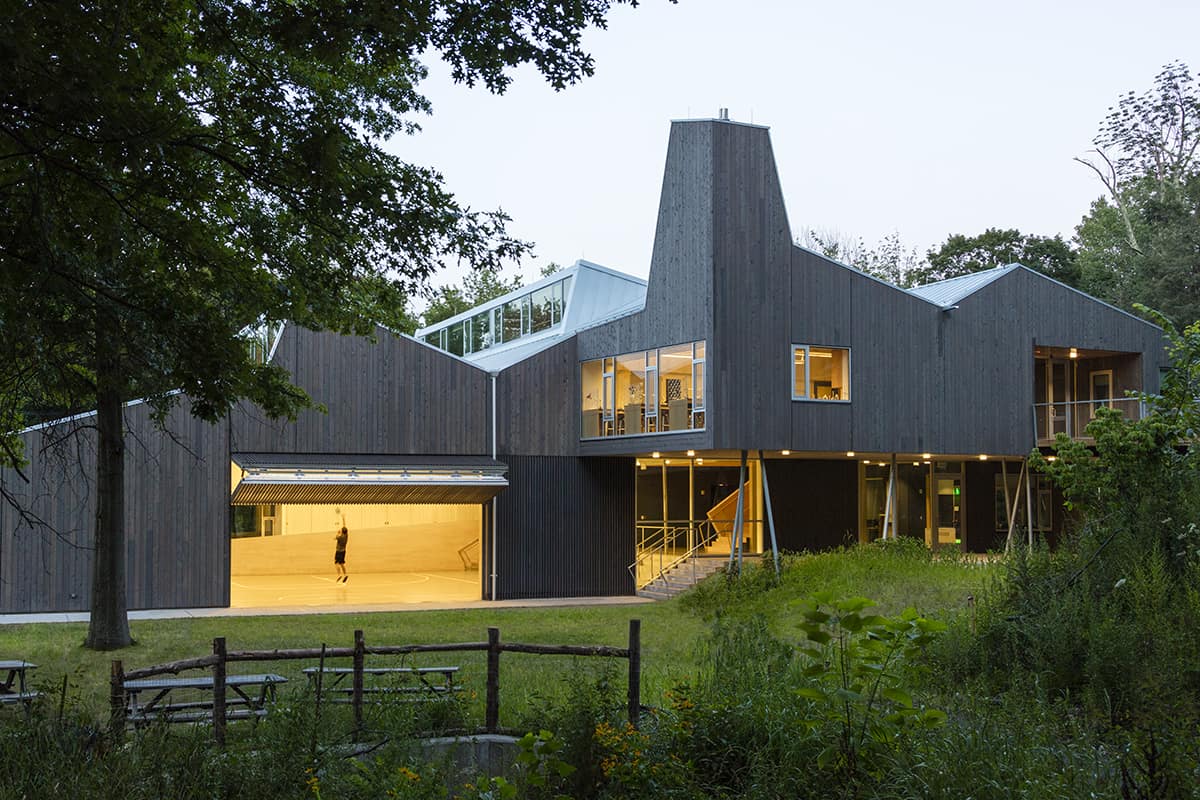 Common Ground is a charter high school, urban farm, and environmental education center in New Haven, tucked against the base of West Rock. The school was founded 20 years ago with a mission of social and environmental justice. The discussion about its expansion engaged parents, students, teachers, and neighbors for years before Gray Organschi was brought in to design a new building. That meant making sense of the old building; embracing the site, which includes ridge, farm, forest, and wetland; incorporating the community’s needs; and creating a constructive example of environmental integrity—by addressing on-site energy production, stormwater treatment, natural illumination, and passive ventilation.

“There were a lot of criteria that were important to us,” says Melissa Spear, Common Ground’s executive director, “and they made that happen. It wasn’t just a building for them.”

The structure is lively yet solid, focusing on rather than dominating the bucolic, yet bustling, campus. The siding is simple, the roofing galvanized steel with sawtooth lighting to the north and solar panels to the south, which provide close to 70 percent of the electricity for the building and its geothermal heat pumps. The interior offers two science classrooms, an art studio, offices, gathering spaces, and an expansive multipurpose space that opens to the outdoors. It is a vibrant and welcoming place, allowing the widely varying activities, age groups, and agendas to flourish and cross-pollinate.

The building is a pioneering example of new mass timber products, “a term that the industry has taken on for different glue-laminated wood structural systems,” clarifies Organschi.

Gray Organschi has initiated a research project to explore the implications of these new products with the clear objective of replacing nonrenewable, energy-intensive materials, such as concrete and steel, with timber. Timber City, a collaboration with Yale’s School of Architecture and School of Forestry and Environmental Studies, as well as the New England Forestry Foundation and the City of New Haven, is bringing consciousness to the construction sector, and recognition of timber’s global consequences and possibilities.

The interdisciplinary investigations have been looking at construction techniques, a significant source of greenhouse gas emissions, to determine how to offset those emissions. Though counterintuitive, it is grounded in hard science as well as hope.

“We’re working to develop a series of projects that are basically biogenic material–based,” explains Organschi, “because the research shows these buildings are healthier in terms of interior air quality, and they’re certainly more environmentally healthy.

“I want my students and our colleagues here to think much more broadly about what it means to build a building,” he continues. “What resources did you draw upon—not just how much energy it uses, or how efficient the wall assembly is, but really, like, where did that stuff come from? What landscape did it transform and how much did it transform it, and how much energy did it consume in the process? All of this has a huge impact on the environment.”

“What forces are you calling into play when you design a building? When you specify materials? And how much responsibility do you have as an architect for taking those things into account?” asks Gray. Then she answers, “A lot, we think. For us, because we were always inclined toward making stuff, it was natural to be thinking about these issues from the beginning.”

“This thinking has always essentially informed our work, but now it’s starting to turn into an implemented practice,” adds Organschi.

At Common Ground, these thoughts are as much a part of the building’s armature as the actual glulam (glue-laminated timber) structural frame. And the building’s many messages have resonated. “We wanted to create a beautiful space for our students, something that was healthy, full of light, and that made them feel valued,” says Spear. “It has had an impact on how they view the world.” 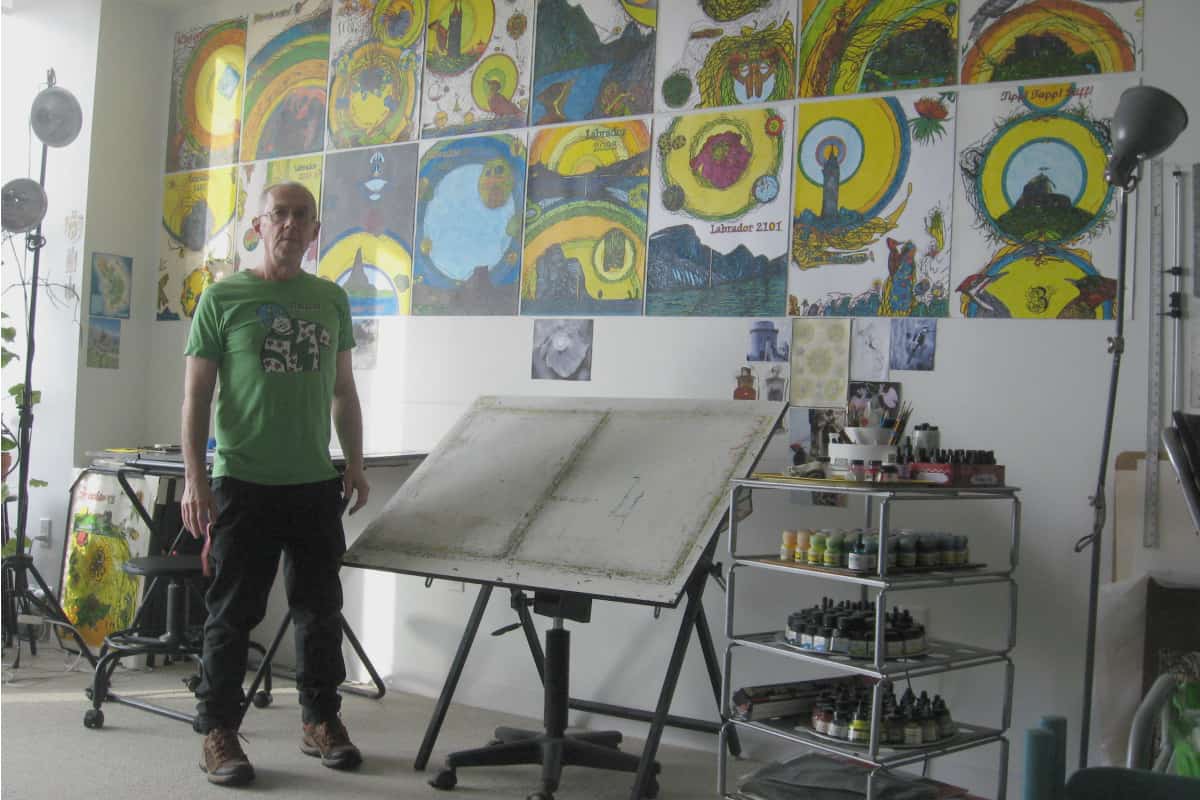 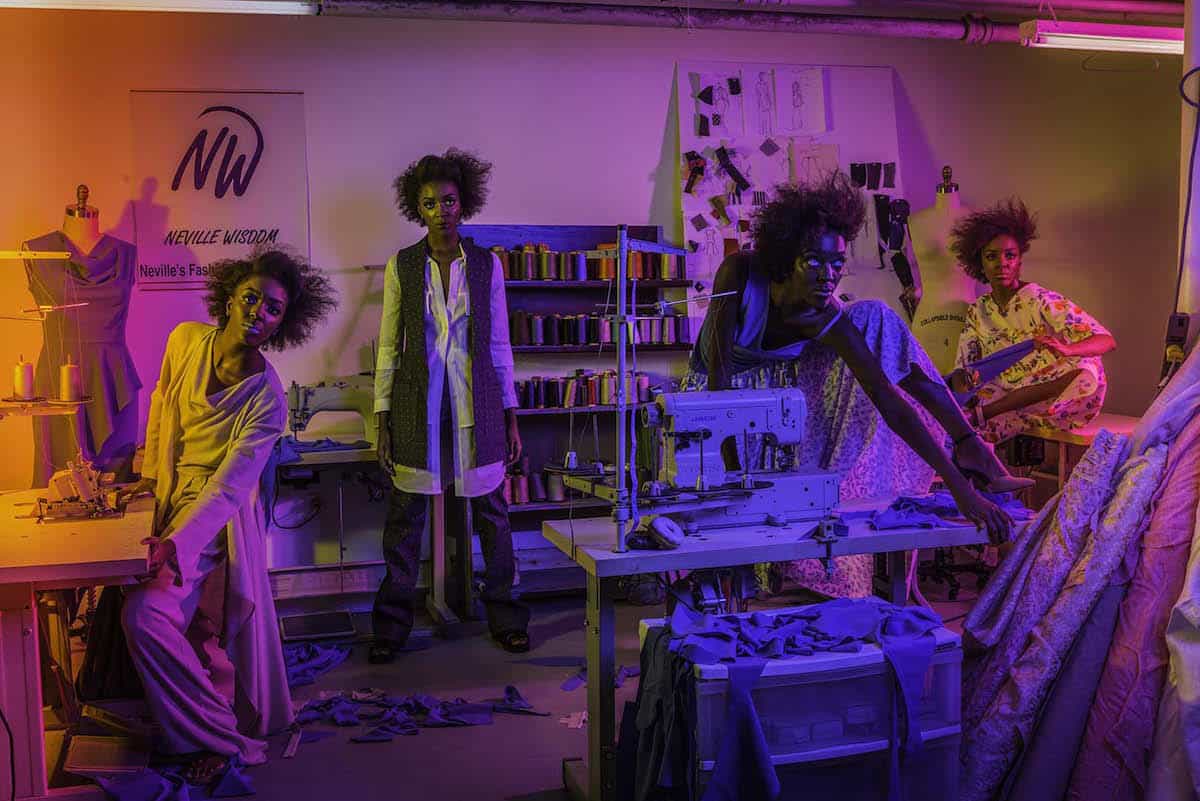