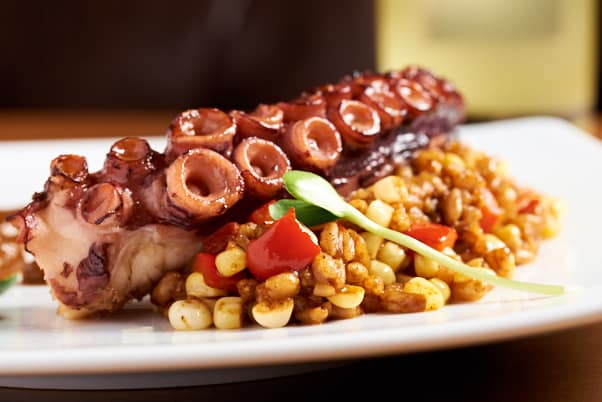 Close your eyes and imagine for a moment: a restaurant, dimly lit and cozy. Step up to the bar and appreciate the array of bottles—filled with elixirs as yet unknown to you. The bartender asks for, and fulfills, a request for a cocktail based on a feeling or flavor. You enjoy a meal crafted around local flavors, house-made ferments, and a chef’s creativity.

Open your eyes. You could be in any major metro center, but you’re in Manchester, New Hampshire, at The Birch on Elm, a jewel box of a restaurant owned and operated by Nick Provencher and Joel Soucy. Provencher helms the kitchen while Soucy oversees a bar program built on classic cocktails elevated with house-made tinctures, juices, and garnishes. 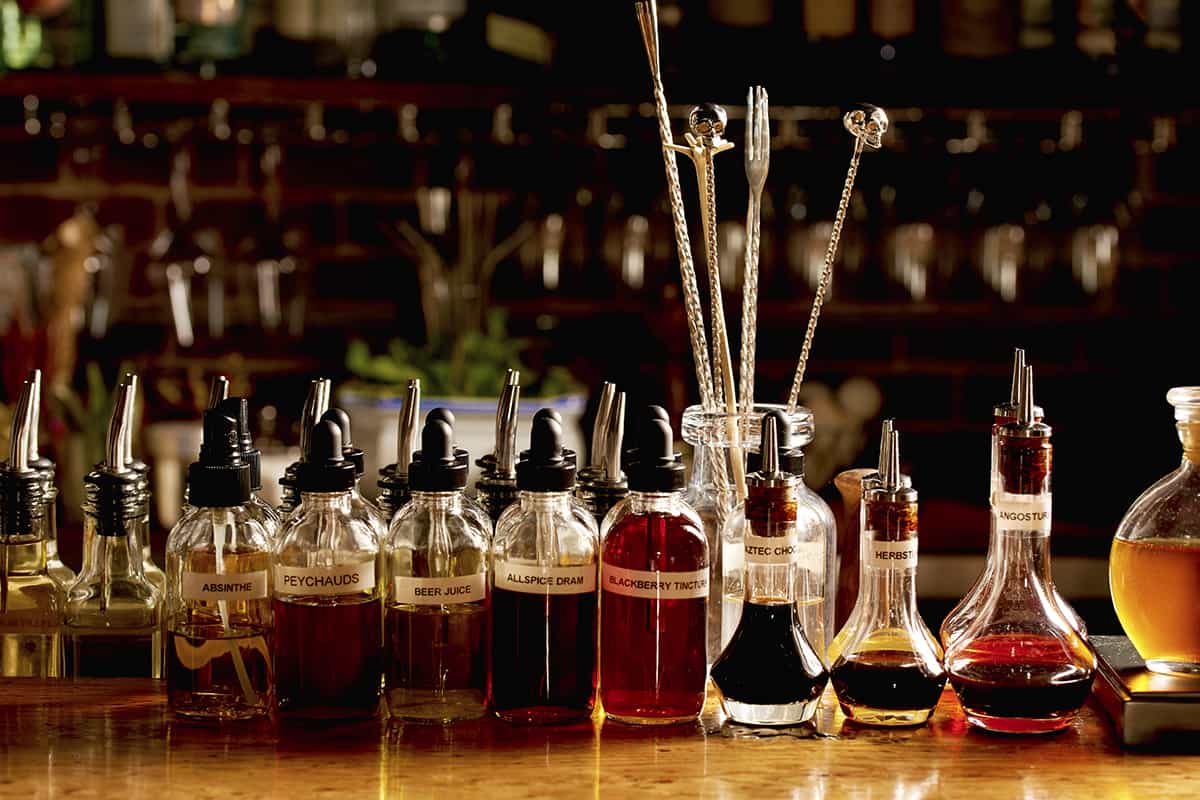 A selection of house-made syrups and infusions at The Birch on Elm. Photo by Dominic Perri

Provencher and Soucy are focused on sharing their vision for hospitality with their community—but why not settle in Boston, Portsmouth, or Portland? These cities are known for their restaurant scenes and continue to draw culinary talent. But for these two visionaries, Manchester beckoned. Provencher was introduced to the Queen City when he joined the team at Portsmouth-based executive chef Matt Provencher’s (no relation) new Manchester gastropub, The Foundry. Soucy worked at bars throughout Manchester for years before he joined The Foundry’s bar team. The two realized that they shared a similar perspective on hospitality and restaurants, and decided a joint venture would be the logical next step.

A brick-lined restaurant space on Elm Street became available, and the pair jumped on it quickly. Soucy recalls, “We talked about looking at spaces in Portsmouth, but saw an opportunity to do this someplace it wasn’t happening already. We could make an impact here instead of adding to an existing restaurant scene.” Provencher adds, “We also wanted to be somewhere that could serve locals and didn’t have a lot of seasonal traffic.” The Birch on Elm was born in September 2016. 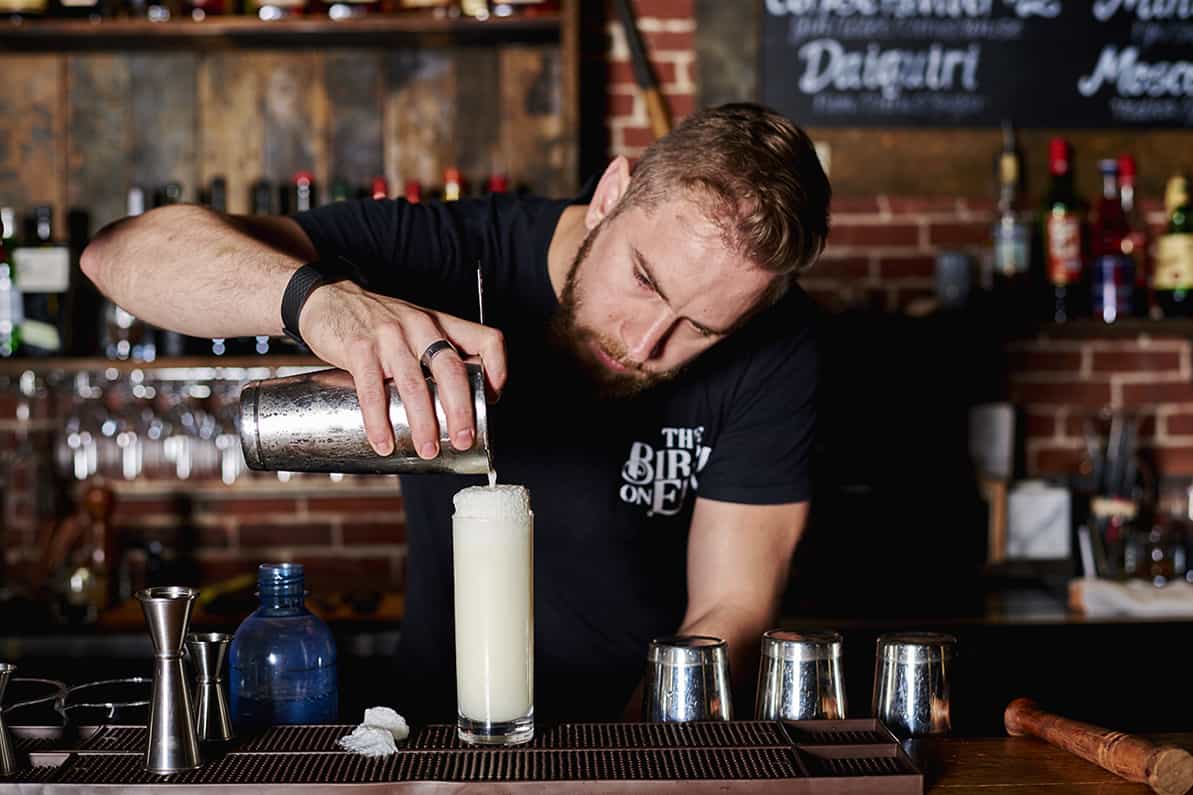 The culinary vision at The Birch on Elm is a collaboration between the kitchen and the bar. Soucy describes a drink from their summer list: the Cardstock Paper Plane. He infused the aperitif Aperol with cantaloupe, which was in steady supply in the kitchen, and built the infusion into a house cocktail. Flavors, ideas, and techniques are shared across the food and drink menus. As a result, the bar program and the dinner menu work together as well as Soucy and Provencher do.

Soucy has been highlighting tiki drinks at the bar. While ersatz versions of Painkillers, Zombies, and Mai Tais may be familiar to most from visits to restaurants that feature pu-pu platters and sweet-and-sour meatballs, Soucy restores them to their original glory. “If we can buy it, we try to figure out how to make it,” he says. His team makes hard-to-find cocktail ingredients like orgeat (an almond syrup) and falernum (a lime zest and clove syrup) and shakes them into cocktails that pack a wallop without cloying sweetness. With the Chartreuse Swizzle, Soucy builds on that tiki tradition by shaking freshly squeezed juice with Yellow Chartreuse—bridging the gap between traditional tiki and modern mixology. 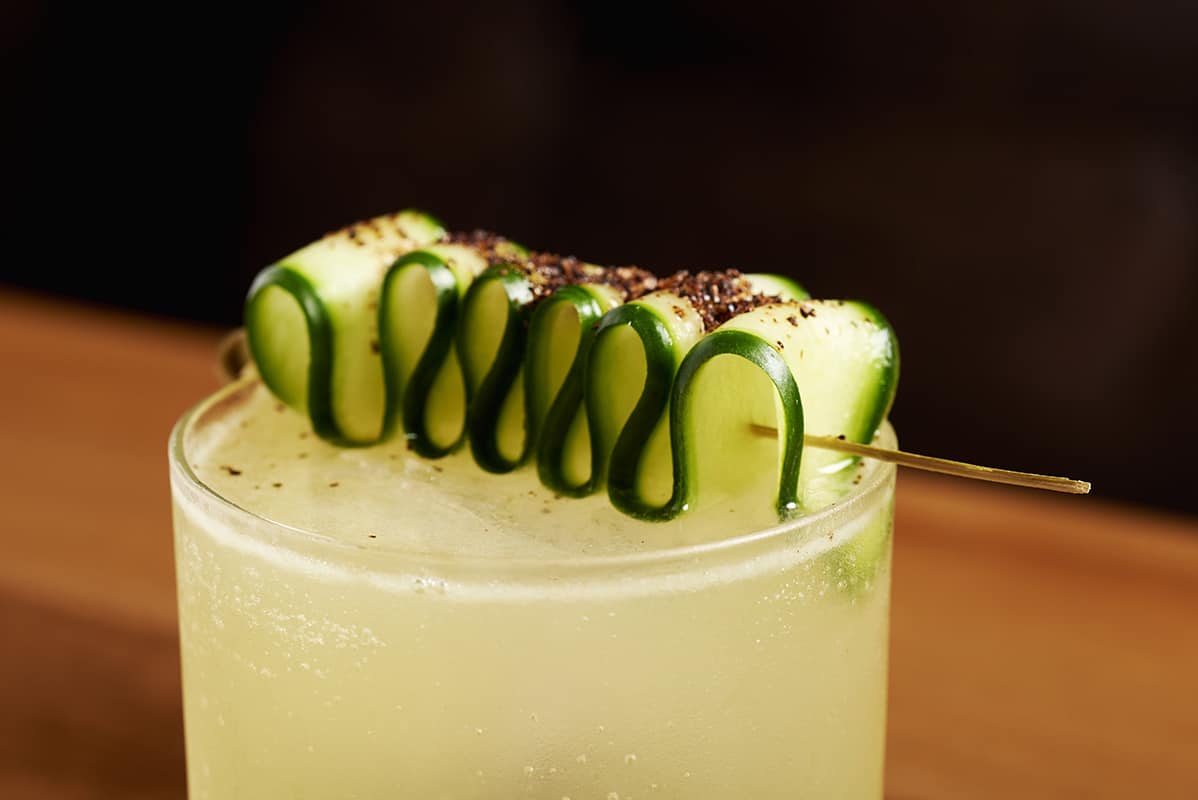 Bobby Vegetal, one of Birch on Elm’s signature cocktails. Photo by Dominic Perri

Provencher takes a similar traditional-meets-modern approach in the kitchen. “I like to play around a lot with textures,” he says. “I play mostly with basic flavor profiles and finding balance between them. There are some surprises that pop up that people don’t understand . . . but then you eat it and it makes sense.” Like many successful chefs, Provencher has chosen to describe each dish on his menu not with a fulsome description, but with a list of its ingredients. 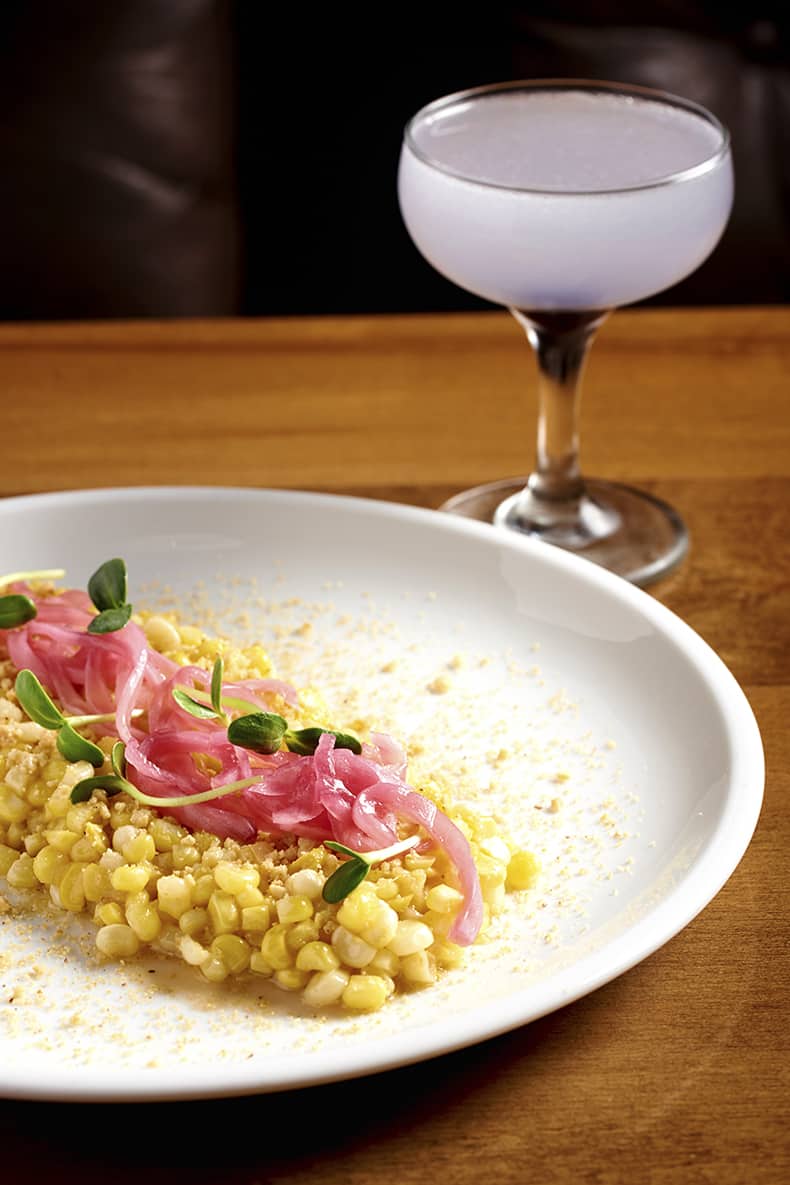 The gin-based Aviation cocktail alongside a plate of Grilled Street Corn. Photo by Dominic Perri

Grilled Street Corn is described as “whipped miso butter, pickled onion, peanut,” Provencher explains.
“It’s got roasted peanuts for crunch, pickled onions for that sour note, sweet corn, and whipped miso butter—salty and fermented. Take one bite together and it balances out.” Other dishes show off their sourcing of local ingredients with a nod to the local suppliers they patronize. A green bean dish and the crab cakes both namecheck Dunk’s Mushrooms. Dunk is a mushroom grower who appeared at The Birch on Elm bearing boxes of ’shrooms shortly after the restaurant opened. Provencher has been a customer ever since, and Dunk’s mushrooms have become a feature on the menu. 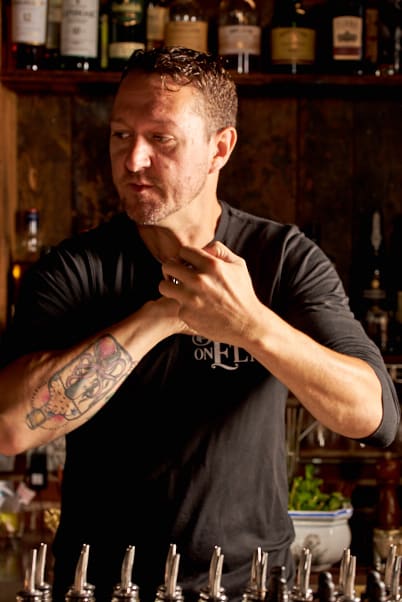 One item that shows off Provencher and Soucy’s playful side is the Brookford Farm Burger, which contains “pickled farm veggies, farm cheddar, hand-formed farm patty, hand-punched fries [aka hand-cut local potatoes], Wonder Bread & Heinz, America!” Soucy lights up as he describes it. “It’s a local beef patty, topped with local cheese, but then we top it with Heinz ketchup and serve it on Wonder Bread. It’s perfect!”

After a year in business, the team is still working long days and continuing to refine their seasonally changing menus. But that doesn’t mean they’ll let moss grow under their feet. When asked what’s next, Provencher and Soucy’s eyes light up at the restaurants they could build in the city they’ve chosen as their own. They aren’t talking on the record yet, but they have plans for one addition—or more—to the Birch on Elm family. Until then, there’s a comfortable seat, a cold drink, and a delicious dish waiting at your table on Elm Street. 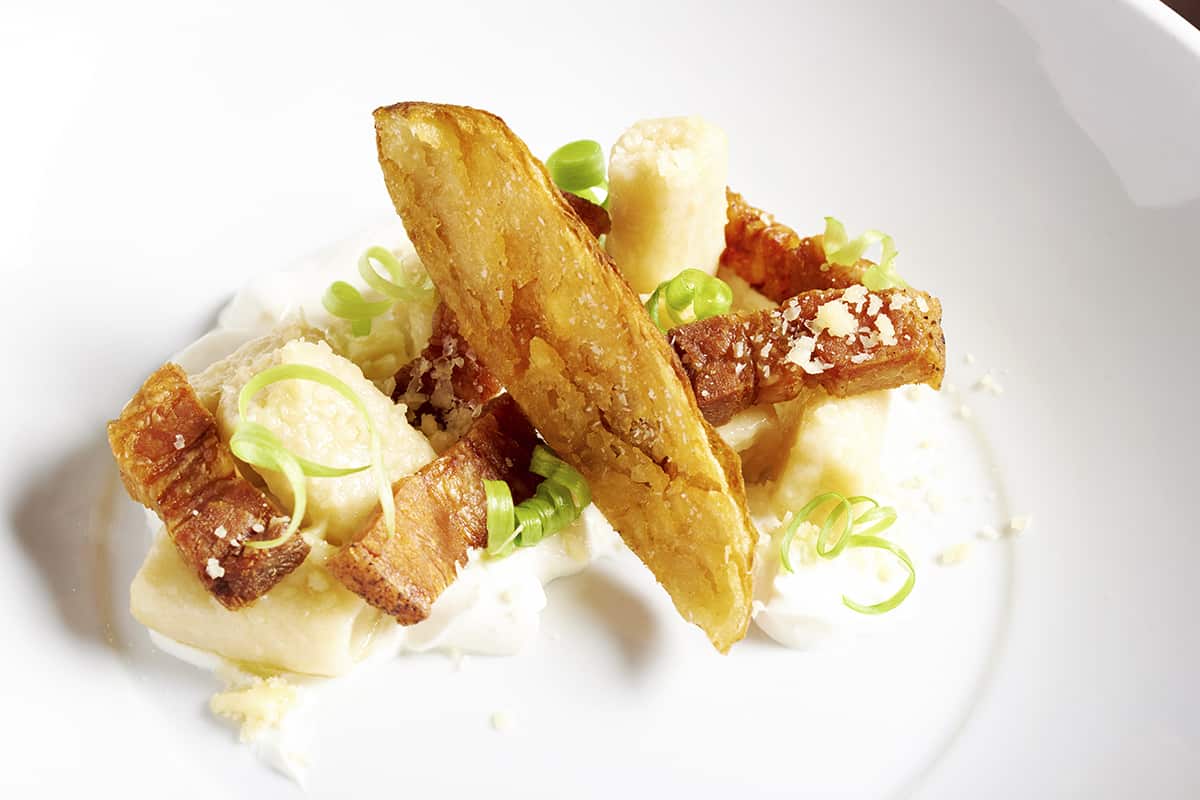