Mathewson Street United Methodist Church is one of many religious buildings entrenched in the fabric of downtown Providence, Rhode Island. Located on a transitional block, the church faces a row of empty storefronts, one of which bears a sign promising that the long-shuttered Chinese restaurant Dragon 2000 will someday reopen as a gay nightclub called Dragon. The church building is notable from the outside for the huge mural adorning its left side: a man in a pineapple-and-pizza-print shirt tossing some sort of ring in the air. A mouse loiters by his ear.

While passers-by should be forgiven for ignoring the posted church bulletins, it’s immediately clear that something different is going on here. And it is: the church’s top floor features a 1,300-square-foot black box theater. It’s also the home of OUT LOUD Theatre, one of Rhode Island’s most forward-thinking theater companies. 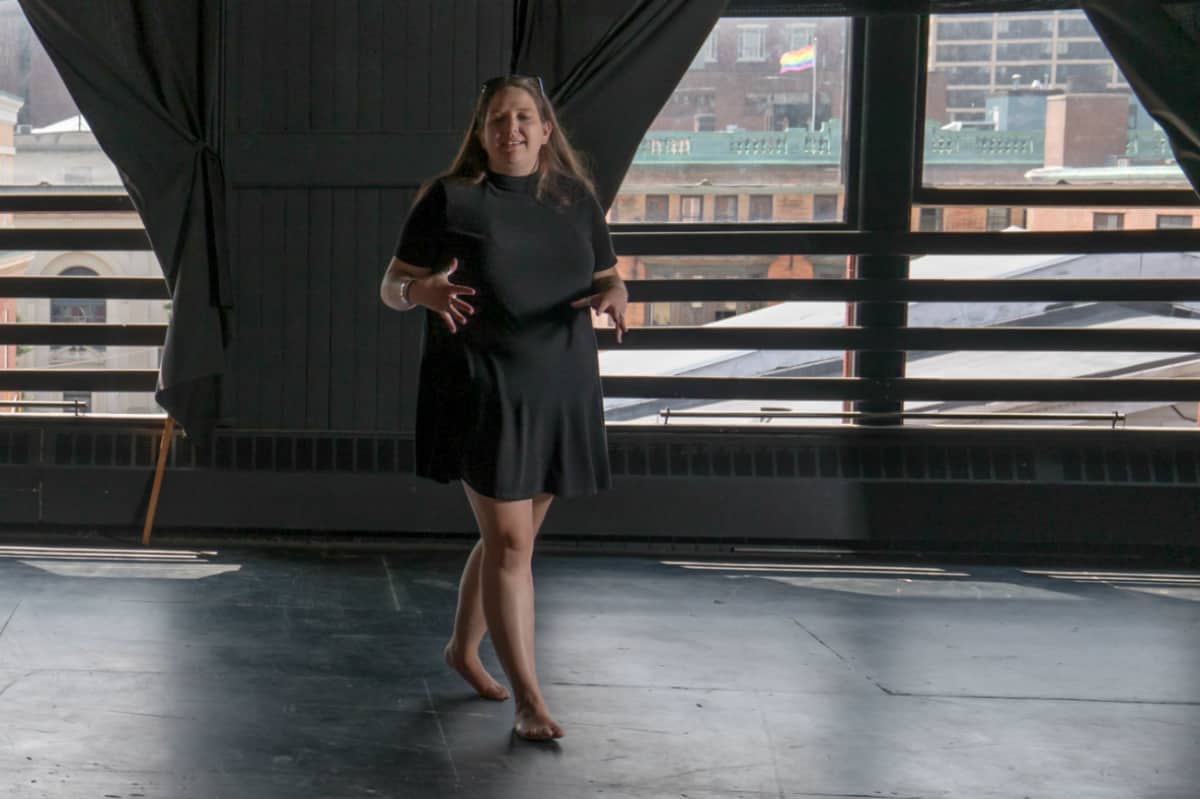 Kira Hawkridge founded OUT LOUD five years ago after graduating from the University of Rhode Island. A Pawtucket native, Hawkridge has a theatrical pedigree. Her parents are local theater vets who ran NewGate Theatre, a company that 20 years ago performed in the same church where OUT LOUD performs today. “I grew up in that building,” Hawkridge says.

Is it unusual for a theater artist to start her own company immediately after college? Perhaps. But OUT LOUD is not a normal company. “It’s a lab environment,” Hawkridge describes, “and a support system for artists who are well versed in craft, in doing and observing.” More specifically, OUT LOUD is a company that’s increasingly centered on movement. Not dance per se, but the physicality of performers who aren’t formally trained in dance.

The company’s three annual productions are always united by a common theme. Two years ago, for instance, the season focused on the public domain—plays were performed for free by volunteer actors, with no money allotted for sets, costumes, or performance rights. (They did Antigone, Dracula, and Coriolanus.) 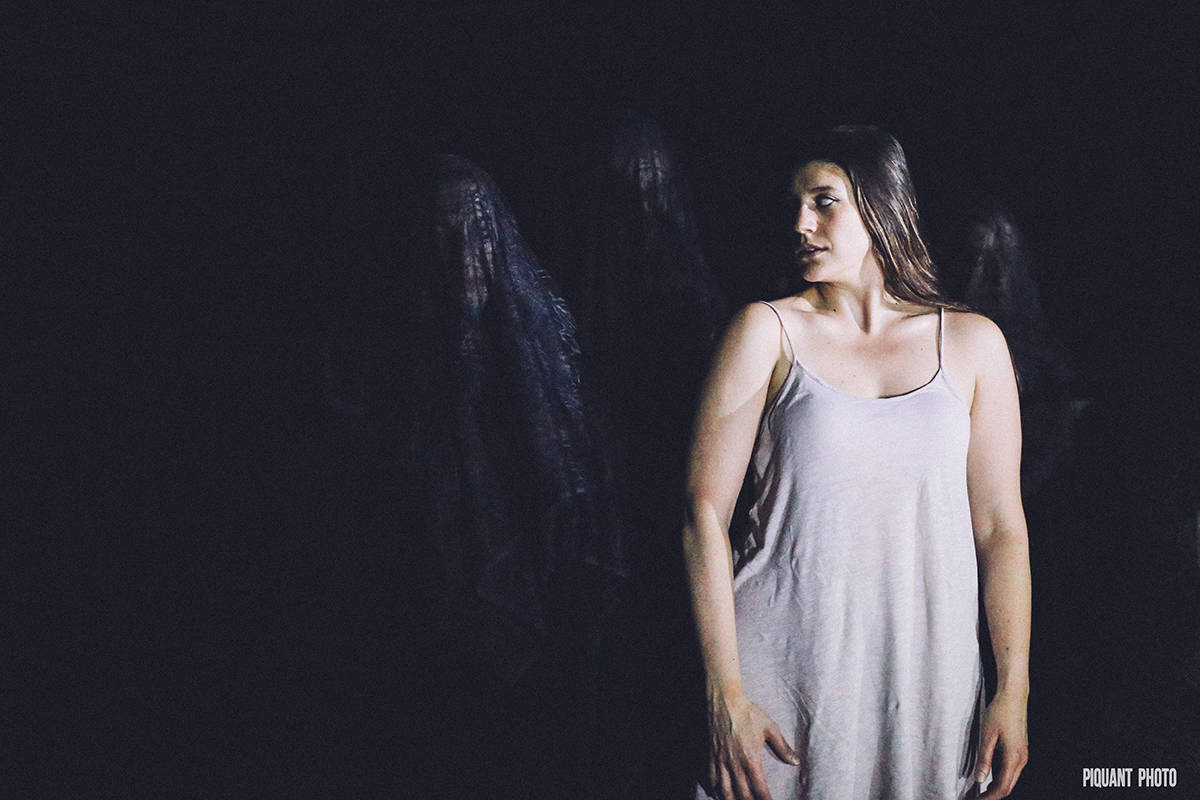 Ottavia De Luca as The Woman in The Yellow Wallpaper (2017). Photo by Piquant Photo

Last summer, the company presented an original adaptation of Charlotte Perkins Gilman’s 1892
feminist classic, The Yellow Wallpaper. Performed with minimal dialogue, the Victorian-era chronicle of postpartum depression was told in four parts over four consecutive nights, with a different actor playing the unnamed woman each night. Before each show, audience members rode up the church’s jaunty, nautical-themed elevator (which features a plaque dedicated to the elevator operator who used to run it). They were then handed cups of water and shuffled into a makeshift doctor’s waiting room, complete with copies of Highlights magazine, to wait for the show to begin.

“The Yellow Wallpaper was our first experiment in physicalizing a preexisting story,” explains Hawkridge. “It was a yearlong process.” The four nearly silent pieces were each brief but powerful, with each performer revolving around the stage in choreographed dissonance, reflecting the main character’s inner turmoil.

Hawkridge won’t take credit for the adaptation. “It was a collaborative process, so I don’t consider myself the writer,” she says. “I’m more of a guide for people to find things already in themselves. That dynamic seems more truthful than saying I’m the writer that adapted the story. The group is very gracious with vision.” 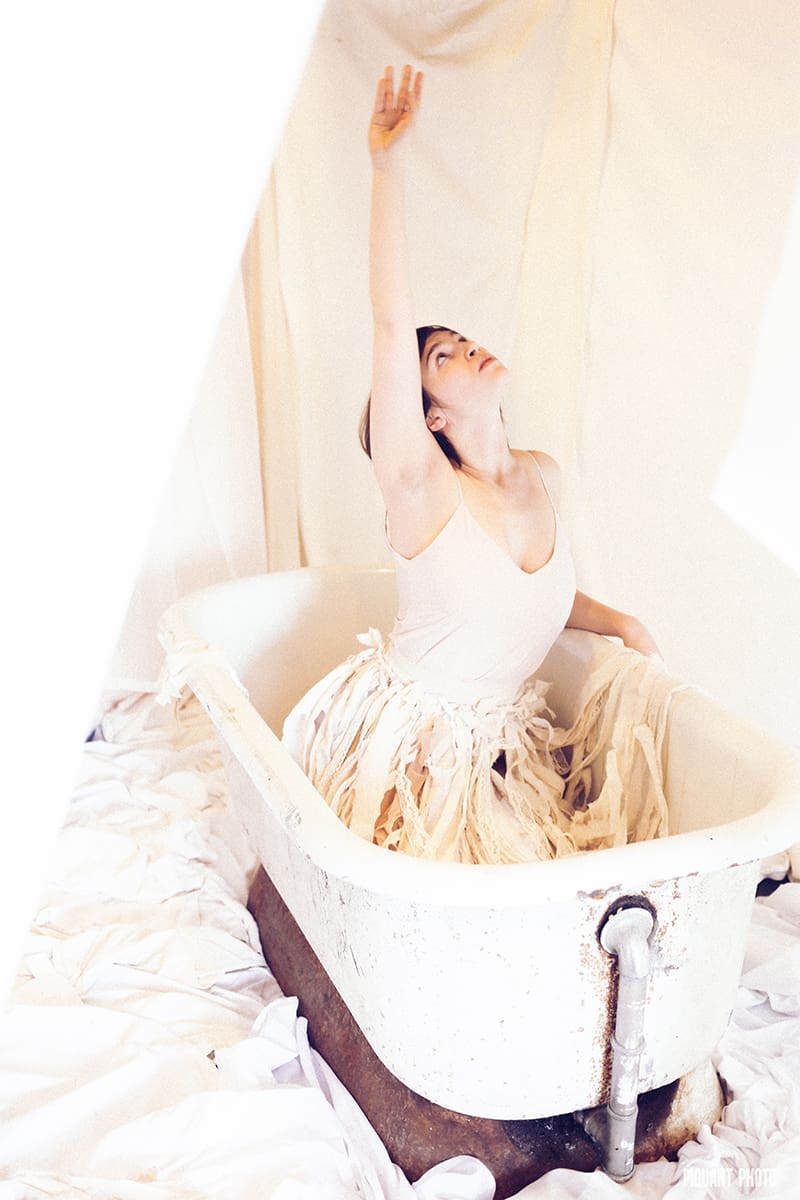 Reviews were overwhelmingly positive. “We’re always in the mode of asking how we can be more effective,” she explains. “With The Yellow Wallpaper, we ask how it can be stronger. It can always grow. With Marat/Sade, we did it and put it to bed.” Marat/Sade was their spring show, and their largest to date. The cast featured 17 actors, plus a piano player and a stage manager who were both incorporated into the show. Peter Weiss’s 1963 play, set in a nineteenth-century mental hospital, is epic in every way. (Even the full title is overwhelming: The Persecution and Assassination of Jean-Paul Marat as Performed by the Inmates of the Asylum of Charenton Under the Direction of the Marquis de Sade.)

“We do themed seasons,” Hawkridge says, “so the audience grows and changes. We’ve built up a core subscriber base, who go for our approach to each theme rather than the theme itself.” Season five’s theme was madness, and it wrapped up in November with a production of Shakespeare’s King Lear. She cast Alan Hawkridge, her father, as Shakespeare’s ruler, driven to madness by his daughters.

“I love working with my dad,” she admits. “We’ve always had an easy, collaborative process, and we also challenge each other in creative ways. Obviously I’m biased because he’s my dad, but he’s a great actor. He connects you on a journey with each character.” Both Hawkridge and her father wanted to emphasize the mental aspects of the play. “The focus is zoning in on Lear’s mind, bringing the audience into his madness. The language is so viscerally potent.” And again, the play will feature a lot of movement. “The idea is to digest Shakespeare’s language, absorb it, and translate it into physical language,” she states. 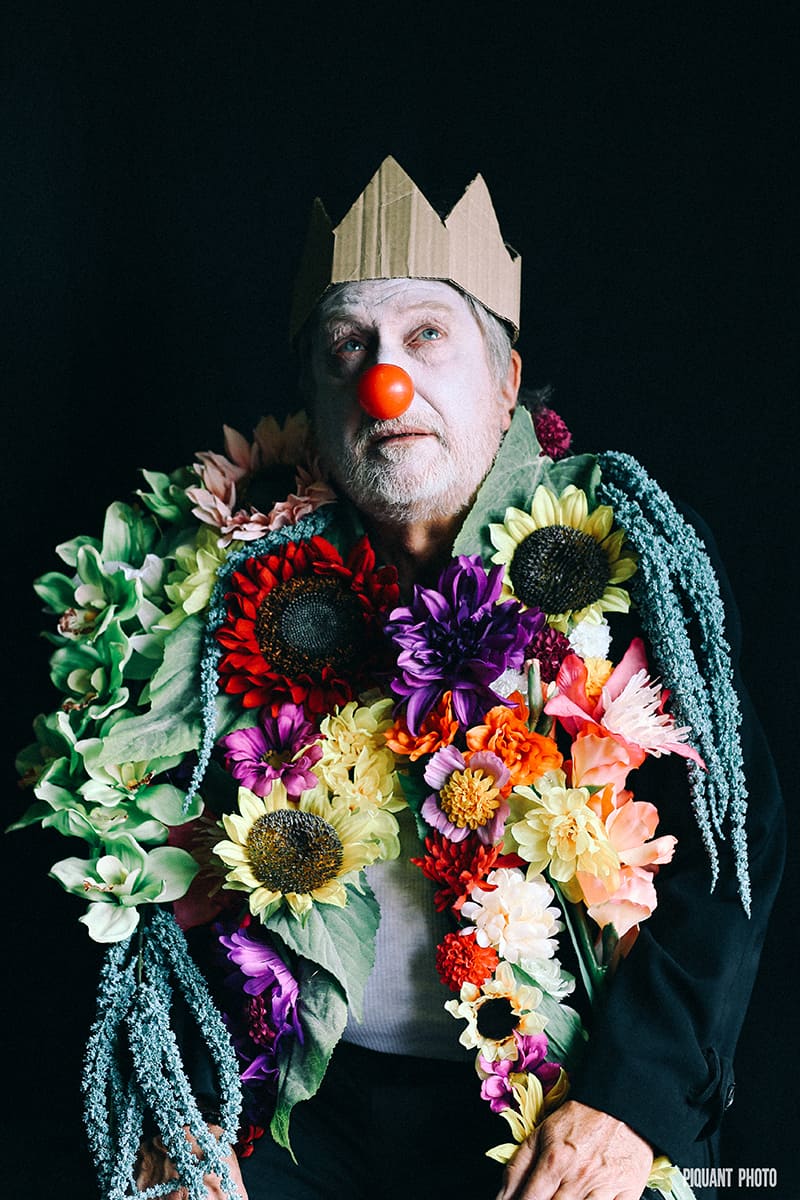 OUT LOUD appeared at a time when a number of theaters popped up more or less simultaneously in Rhode Island, like Epic Theatre Company, Contemporary Theater Company, and Burbage Theatre Company. The artistic directors are all friendly and frequently work together. Hawkridge, for instance, regularly directs shows at Epic Theatre Company, adding her own personal touches. “It’s a part of how I tell stories,” she says, describing why she incorporates signature elements of her own work into productions she stages for other companies. For example, when Epic Theatre Company brought her in for Tennessee Williams’s saucy Cat on a Hot Tin Roof, she left the lead character on stage for the whole show, drunk and passed out on the floor when he wasn’t called on to act. The play’s two halves each opened with a wordless group dance.

Unlike most companies, OUT LOUD works its season around a calendar year, rather than the traditional fall/spring season. “That actually started because a lot of our company members were still in school,” Hawkridge recalls. “So people had summers free.”

At this point, there are six main ensemble members. “This is the smallest ensemble that we’ve worked with,” she says. “By design.” Season six, the 2018 season, focuses on collaboration and the specificity of collectively creating material. After a year of studying mental illness, this season will be a lot brighter. “This season’s going to be light and joyous, with elements of fantasy and unreality.”

Well, mostly. Escape is an original piece about the grief a woman experiences when her twin brother dies. “This is really influenced by the core ensemble wanting to explore the specificity of grief,” Hawkridge explains. “It’s about finding joy after trauma. We began with the subject of twins and let it ripple out from there.” Escape was conceived by Hawkridge and she will direct it, but it will be choreographed collectively by the ensemble. The play features a woman and the ghost of her brother, as well as surrounding figures (a partner, a mother, a therapist). There will be little to no dialogue. 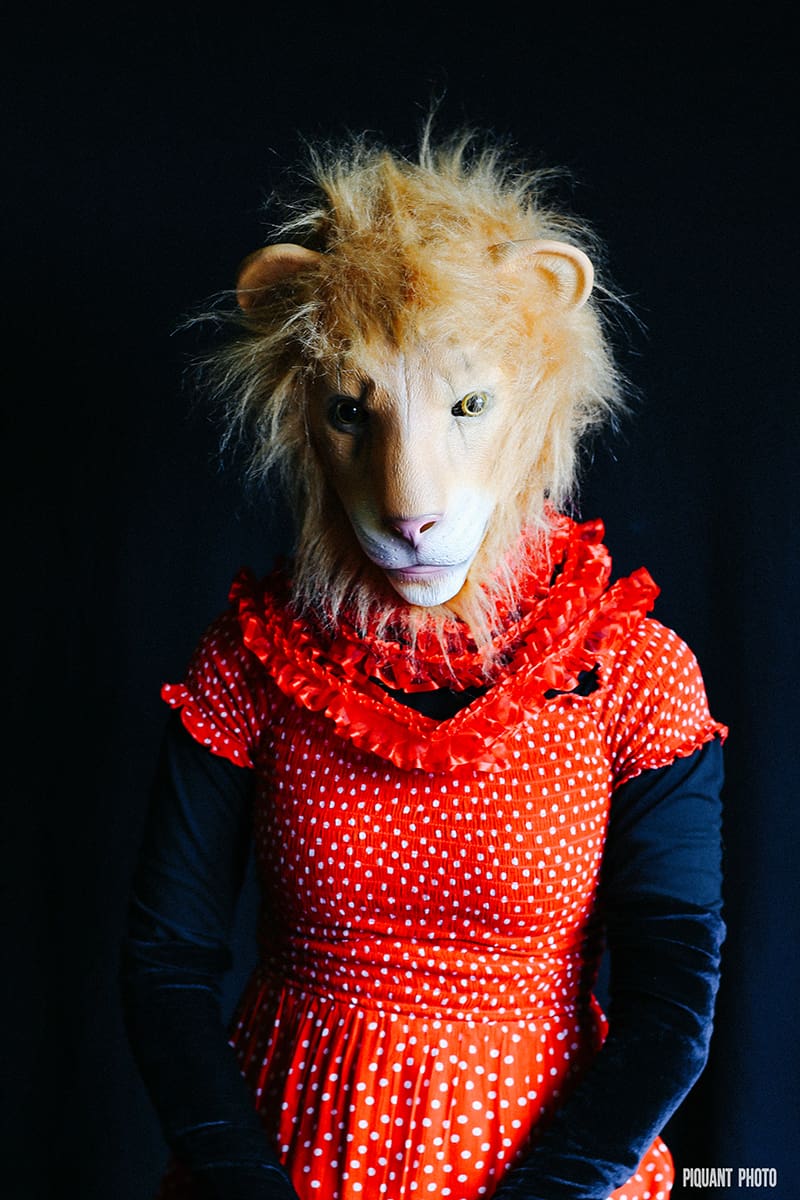 The two other shows of the sixth season will be more familiar to theatergoers: Wonder is inspired by Lewis Carroll’s two Alice books—that one will be “interactive and sensory,” according to Hawkridge. Dream is an adaptation of A Midsummer Night’s Dream. Unusually, they’re performing the entire season at once. After six solid months of rehearsals, all three shows will be performed in June 2018. That’s a busy time for the arts in Providence: PVDFest covers the downtown area the first weekend of the month, and two weeks later, the city will be overtaken by a nighttime Pride parade. It’s a shining moment for the downtown, specifically right around Mathewson Street, and Hawkridge hopes OUT LOUD will add to the momentum.

Top image: Sarah Leach as The Woman in The Yellow Wallpaper (2017). Photo by Piquant Photo