Even though we at Take get to look at art made by different New England artists all day long, we are still regularly, pleasantly surprised by the work of someone new—or several someones, as you’ll see here in our third annual listing of artists to watch.

We asked curators from esteemed galleries and museums to tell us about artists they’ve been especially impressed by lately who deserve a wider audience, and were thrilled to get input from Trevor Smith, curator of the Present Tense, and Lydia Gordon, assistant curator for exhibitions and research, both at the Peabody Essex Museum in Salem, Massachusetts; Elizabeth Spavento, visual arts programmer at SPACE Gallery in Portland, Maine; Lindsey Stapleton, codirector of GRIN in Providence, Rhode Island; Suzette McAvoy, executive director and chief curator at the Center for Maine Contemporary Art in Rockland, Maine; Will K. Wilkins, executive director of Real Art Ways in Hartford, Connecticut; and Alan Chong, director and CEO of the Currier Museum of Art in Manchester, New Hampshire.

With such an illustrious panel, we know you’ll want to keep an eye on these artists in the coming year—and beyond. 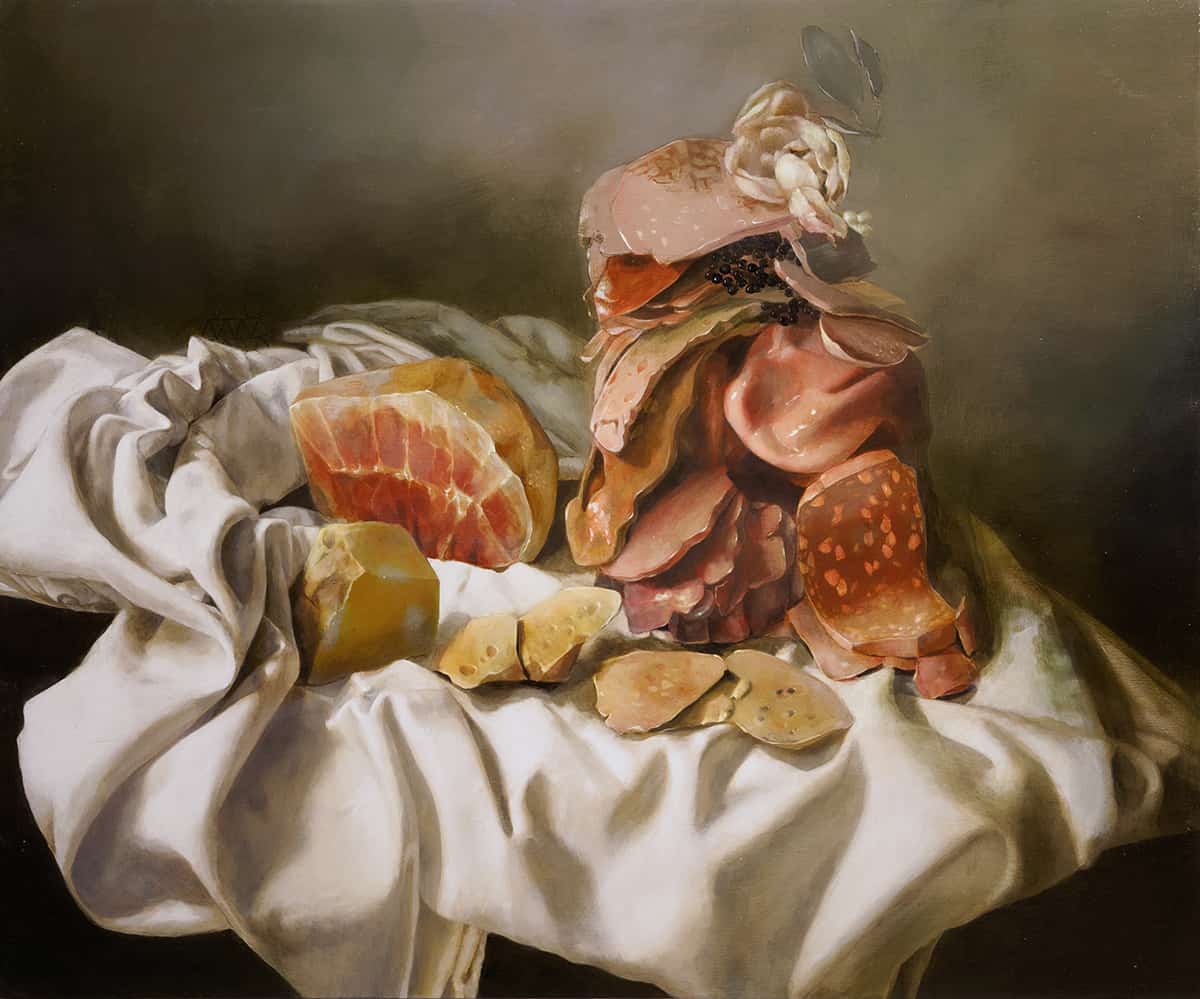 A bona fide New Englander, Duennebier was born in Hartford, went to college in Maine, and now lives in Boston. “Riffing off the formal tradition of Dutch still lifes, Duennebier is obsessed with excess and growing, throbbing masses,” says Gordon. “Yet, she spends a great amount of time on delicate surface treatments, complete with glimmers of gold and super fine detail. They’re repellant and beautiful at the same time.”

Duennebier has been experimenting with making clay models to help her visualize specific forms and textures in her paintings. The results of this process, including a brighter color palette, will be on display in a solo show at 13FOREST Gallery in Arlington, Massachusetts, in May. 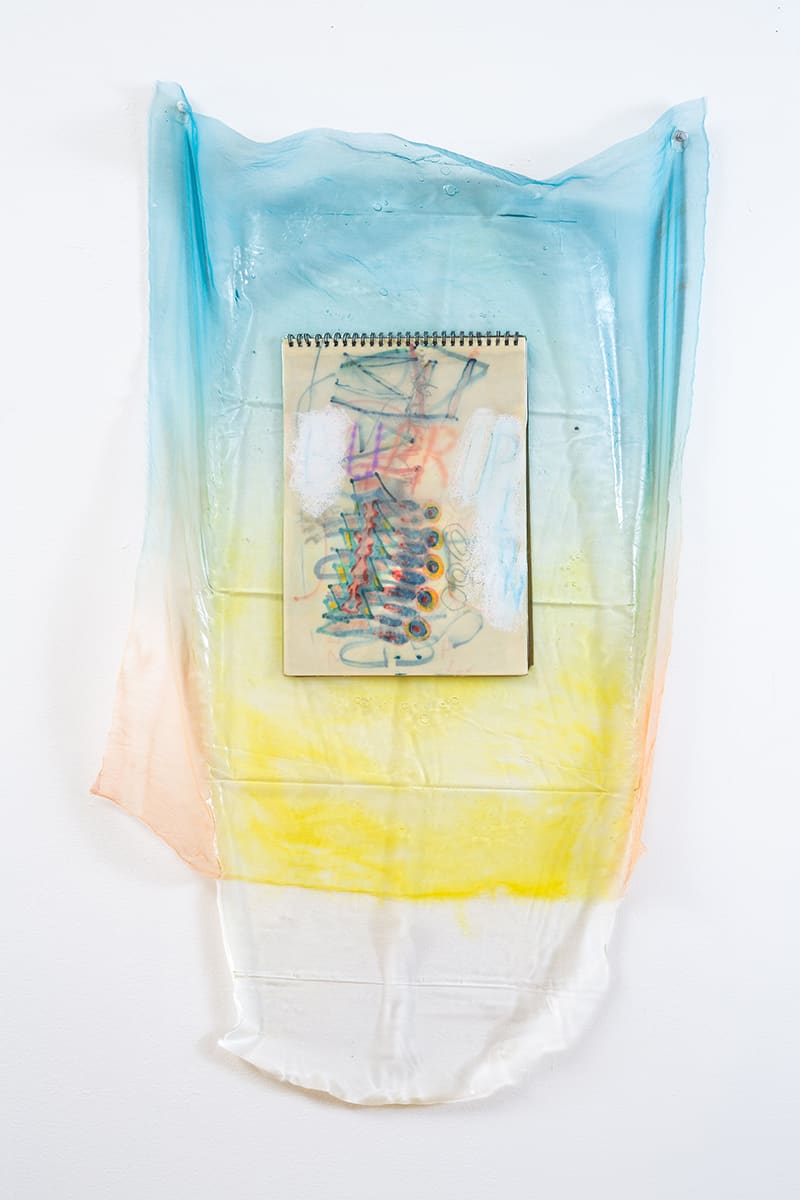 Although she freely incorporates colorful sheets of chiffon, puddles of clear epoxy, and plexiglass sheets into her work, “Heather is a painter inside and out, whether she’s making traditional paintings or animating a video—it doesn’t seem to matter,” says Stapleton. “Her language is recognizable as her own, full of history and self-reference.”

McPherson, who is based in Providence, makes decisions through the physical, experimental process of making, but that’s not to imply her work is only about mixing materials. In the pieces she’s currently creating, she’s exploring the ways art has been used throughout history as a spiritual tool.

“Last time we were in her studio, she had an enviable pile of massive primed canvases on her wall,” Stapleton says. “Something astounding is going to be on those bad boys next time we’re there, I just know it.” 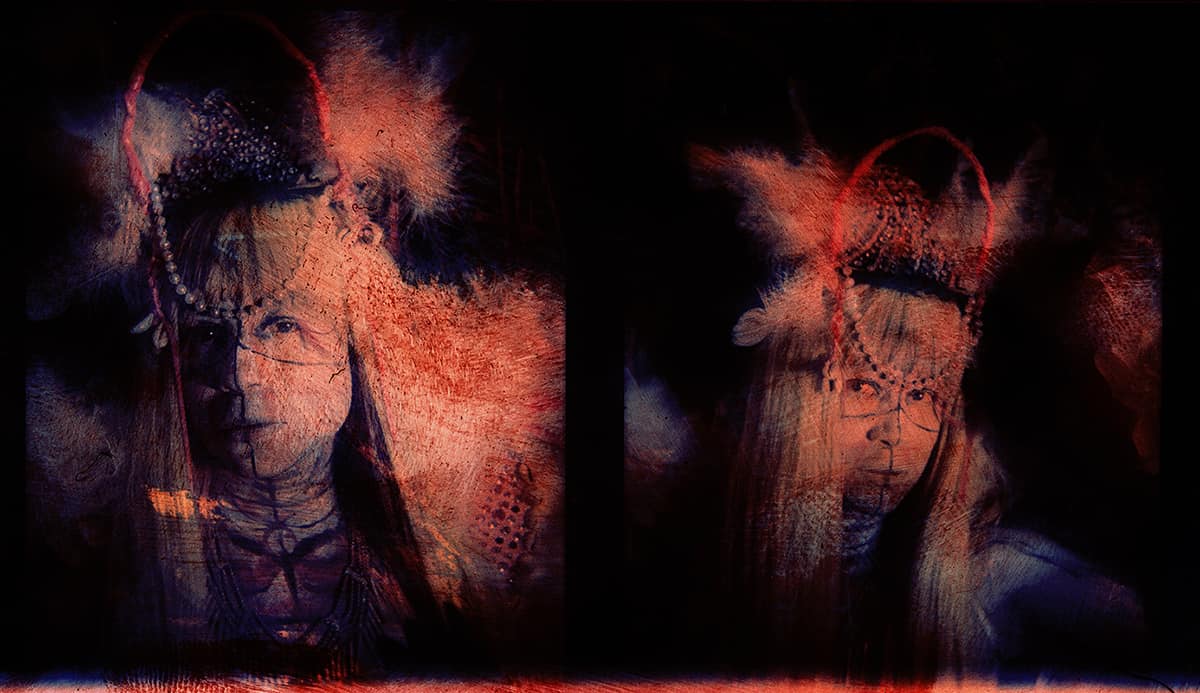 Dell M. Hamilton, To Haunt Is To Love: Reina #6, from Fallen Angels: Making Sense Out of Nothing, 2014–present, color film and unique digital scan on paper, 25 × 37 in. Photo courtesy of the artist

A true interdisciplinarian, Boston-based Hamilton has been tackling topics as diverse as the United States’ influence on Honduras and the history of desegregation in Boston through performance, writing, installation, curation, and more. Gordon recalls, “I had the pleasure of witnessing Hamilton perform at Boston University’s 808 Gallery. Sharing a contemporary response to historical narratives steeped in collective trauma and memory, her gestural performance involved thinking, making, and doing at the service of imagining a better future. It was really a transformative viewing experience.”

At press time, Hamilton was in the middle of producing a body of two-dimensional work called Punta: Pregunta (translated as Point: Question). She’s exploring the intricate tangles of family identity, trauma, and personal neuroses through large-scale, flat, mixed-media artwork, though she isn’t sure how two-dimensional they will stay. 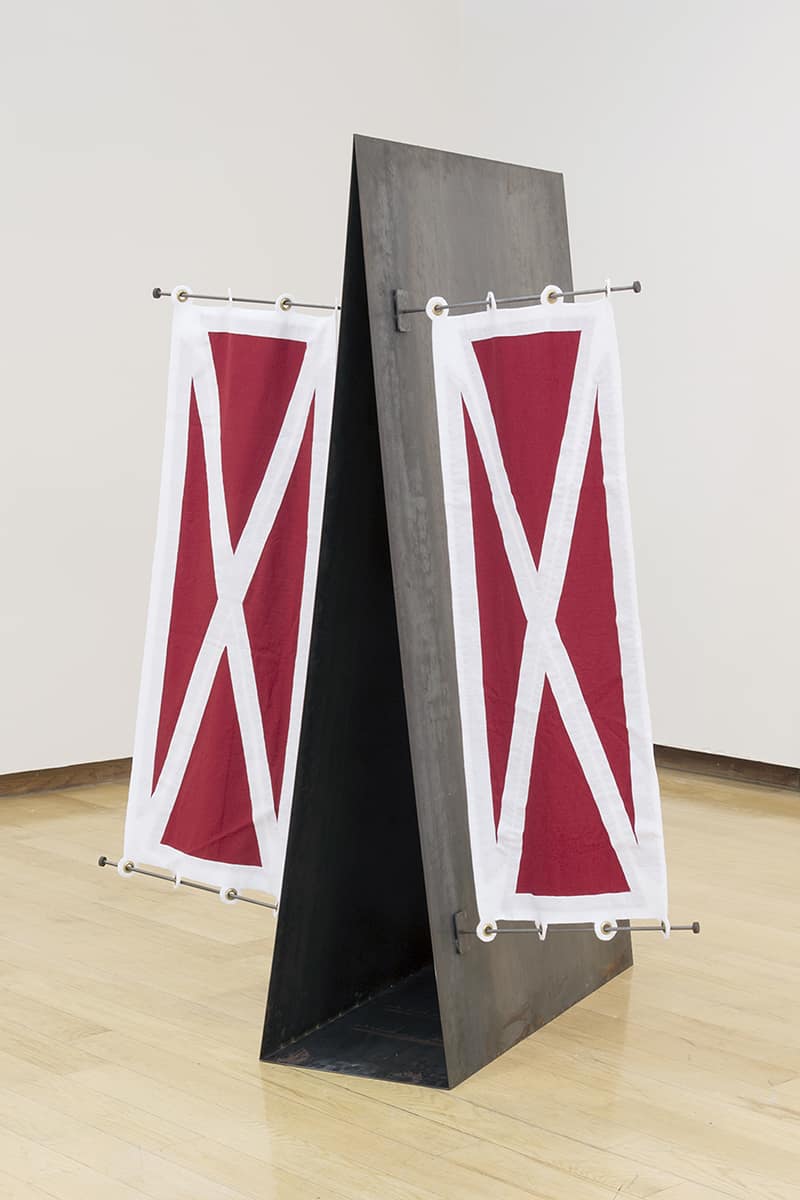 Vermont-based Tortora “is a machine, and her sculptures are the real deal,” Stapleton says. “Her craft and execution is always impeccable. She was making pretty massive work last year, but we’ve seen some small, intimate pieces on her social media that look outstanding.” (Look for her on Instagram.)

Past work includes painted wood wall pieces that resemble letter forms from an unknown language, and full-size abstractions that hint at marching soldiers or classical architecture. “One of my favorite things about her process is how she titles her work,” Stapleton continues. Titles such as Septum, Pallbearers, and Power Bottom “really solidify each sculpture’s identity in a way I haven’t experienced,” she explains. For 2018, she’s developing a new series of sculptures titled Witness Mark, which will reference the way museums illustrate geological time. 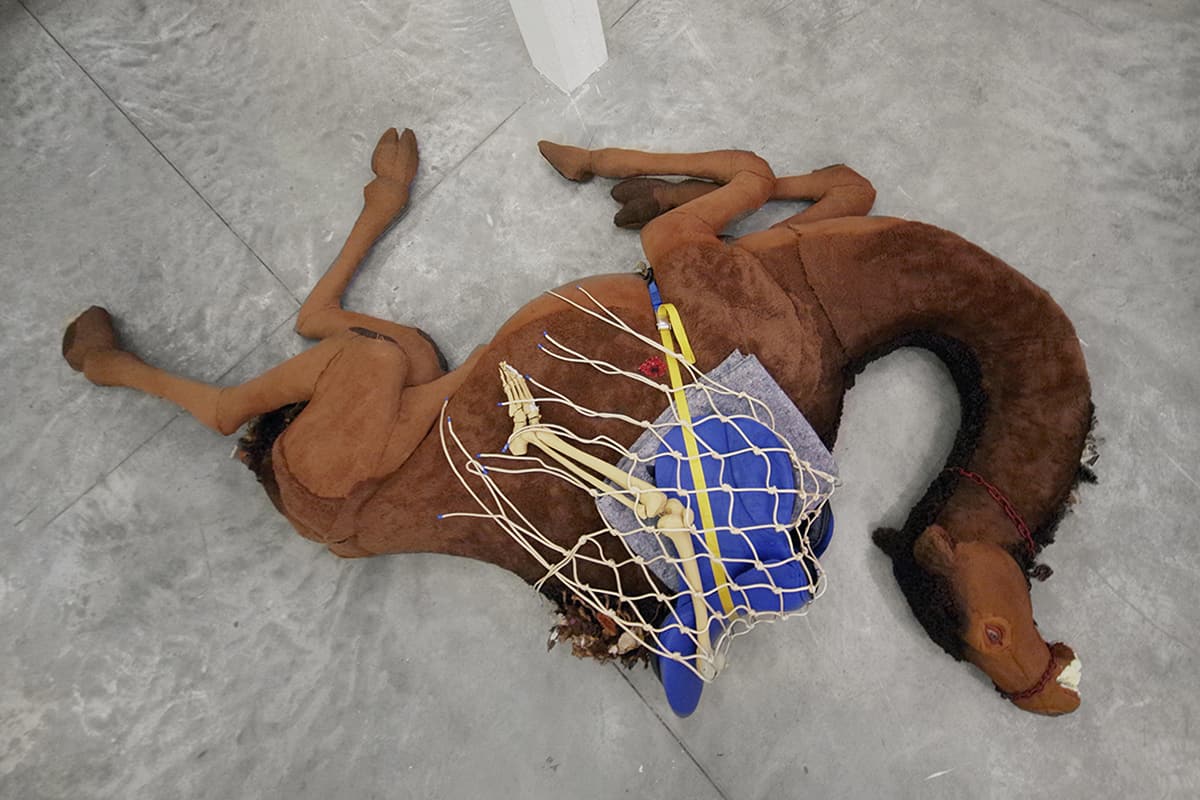 This artist pair from Providence was nominated by two members of our panel. Raina Belleau and Caleb Churchill “make interesting work about history and the environment. They are sweet individuals and masterful craftspeople,” says Spavento.

“We are really into how their projects are visually interesting and accessible while ultimately being heavily research-based,” adds Stapleton. “The work is fun, but still challenging.” For a 2016 installation titled Fantasia Colorado, the pair created memorabilia such as “vintage” postcards, handmade rugs, and historic portrait busts to re-create and commemorate an odd piece of American history: a failed attempt by the U.S. Army to use camels as pack animals in the Civil War; the ultimate release of the animals into the wild; and the terrifying, truth-stretching stories of camel–human encounters that ensued.

“2017 has been a lot of residency and research work, and we’re really excited to see what comes out of that time spent in development,” Stapleton says. Indeed; as of press time, the two were planning to study the concept of utopias—and learn Esperanto, a language created in the 1800s in the optimistic hope of unifying the world—at the Wassaic Artist Residency in Wassaic, New York, in October. 2018 will see their second solo exhibition at GRIN in Providence. 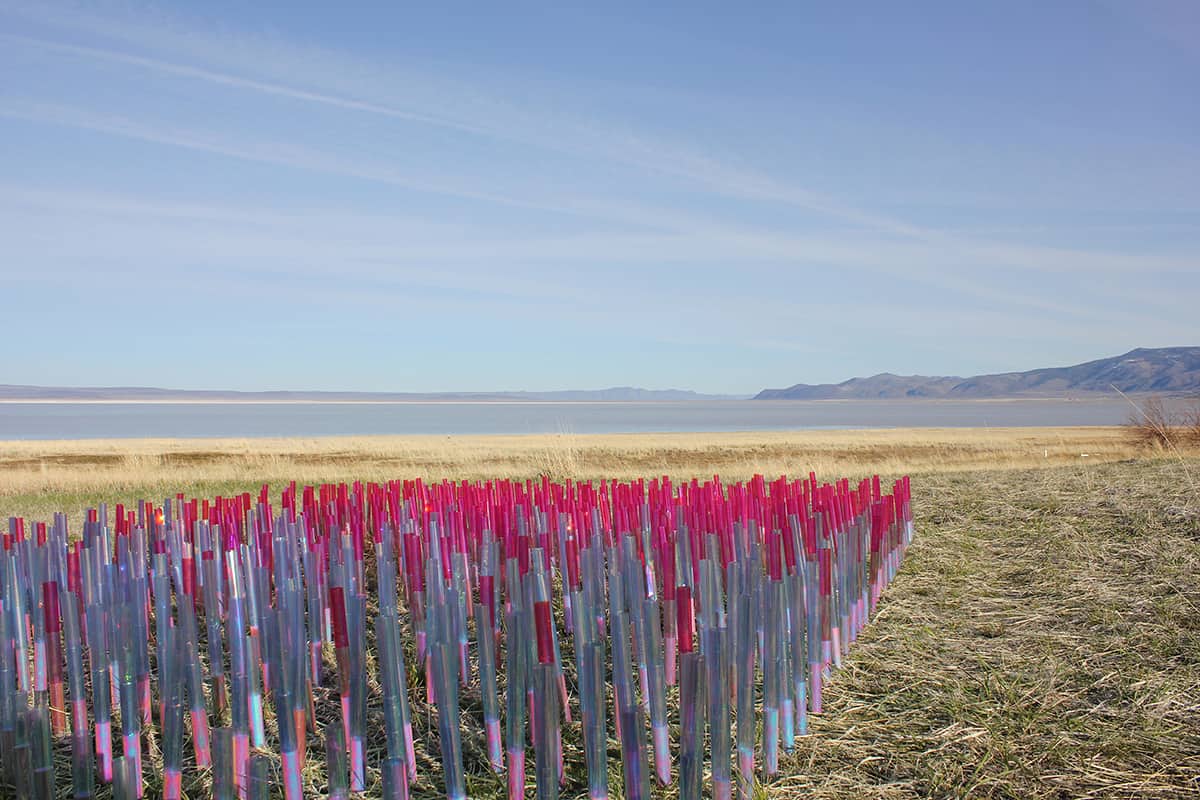 Born in China, Hong immigrated to the United States at the age of nine and now calls Hartford home. Working with materials as humble as mulberry fiber, mylar, Scotch tape, and fishing line, Hong creates large-scale pieces that suggest, interact with, and (when made with mylar) literally reflect their environment. She’s been making massive sheets of paper—as tall as 12 feet—using buckets and water pistols to manipulate pulp on homemade screens. Far from being precious about her finished pieces, Hong has no qualms about taking work that’s been shown and resoaking it, turning the paper back into a slurry of fiber that can be reused and remade. The work becomes cyclical, self-feeding. Wilkins says, “Hong Hong delves into the mysteries of deep time, even as her work is imbued with the sensuous presence of here and now.”

Hong had a solo show at Real Art Ways that ran from August through October, and she has an ongoing relationship with the Hartford arts organization. “We are commissioning a new work titled Everlasting Ephemera, which she will be working on during the coming year,” says Wilkins. The piece is a yearlong investigation of the temporal nature of human perception, and how those parameters affect our environment and our culture. 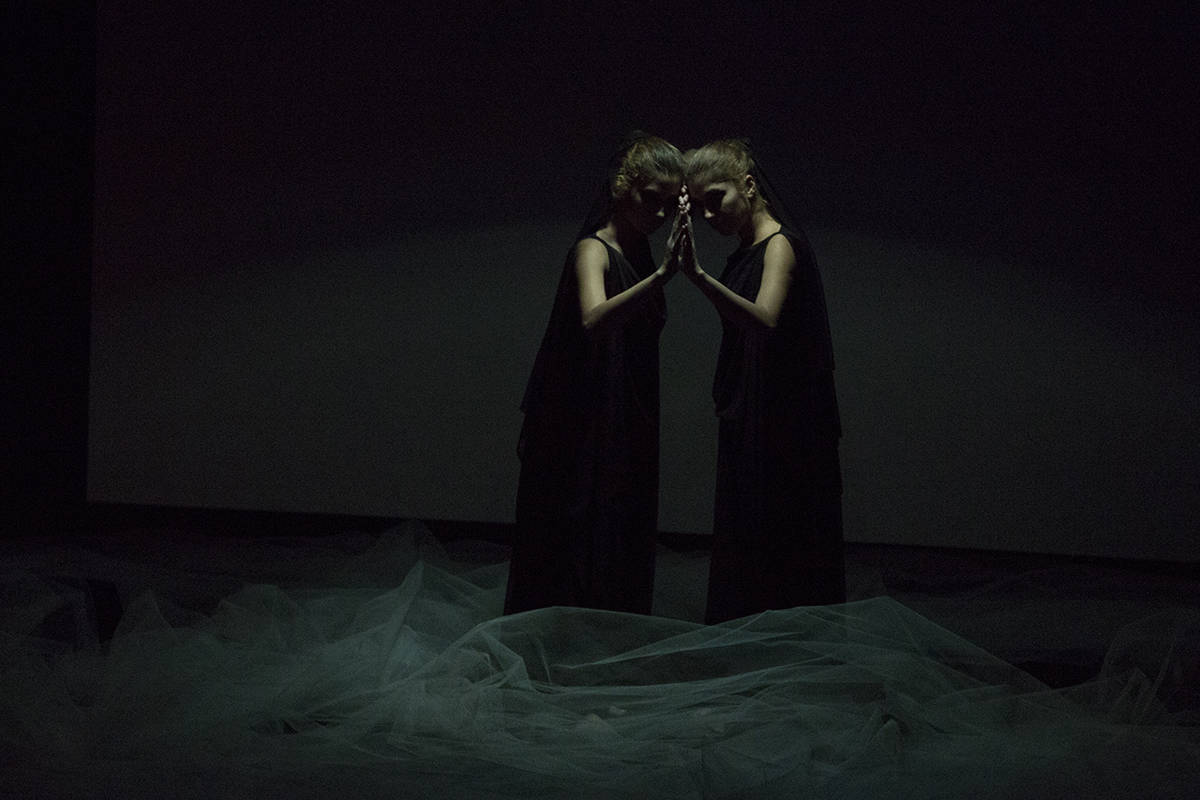 Farzaneh and Bahareh Safarani, a still from Cocoon, performed at the Boston Center for the Arts, 2015. Photo by Hannah Bates

Having trained as painters at the University of Tehran, twin sisters Farzaneh and Bahareh have been branching out into video and performance while they continue their studies in Boston. The Safaranis use their twin-ness to full advantage, acting as each other’s mirrors or as dual selves on stage. “In their melding of meticulous realistic painting, extraordinary performative discipline, and the most exquisitely subtle use of video, the Safarani sisters create an uncanny sense of intimacy,” says Smith.

And it is truly a melding. The two decide which form their art takes—painting, live performance, both—by determining which will explain their idea better. They’re now hard at work on a series of paintings that each act as a paragraph in a larger story, but performance will certainly be a part of their future. In 2018, you can see their internationally recognized work in Los Angeles, Berlin, Armenia, and Iran. 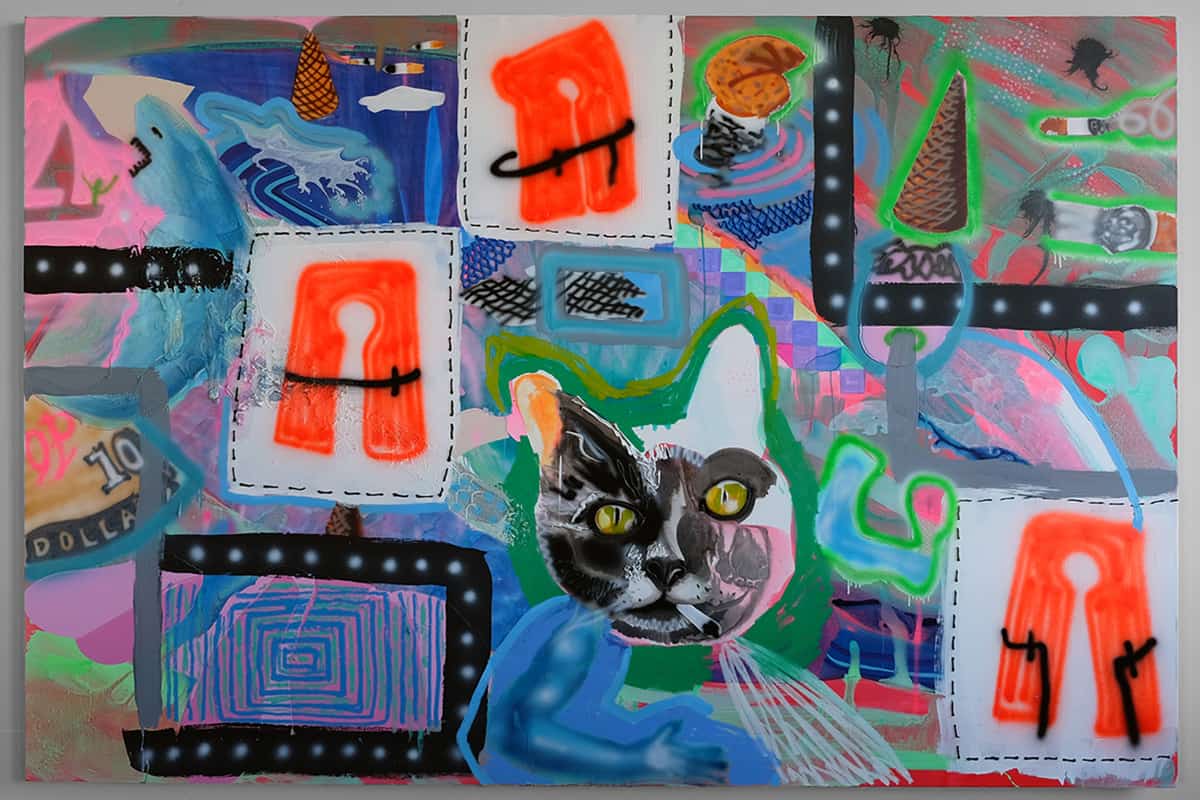 Stark-Menneg was enthusiastically chosen by two of our curators. Spavento says, “Her paintings are delightful, expressive and totally singular in their vision and content. I would recommend her for everything—I’m so in love with her work.” McAvoy agrees, “Stark-Menneg is one of the freshest and most exciting young painters I’ve encountered in a while. Her work is smart, sassy, inventive, and skillful all at once, plus it is a hell of a lot of fun.”

A Massachusetts native, Stark-Menneg was based in Brunswick, Maine, until recently, when she relocated to Providence to enter an MFA program at RISD. At school, she plans to continue to explore ways to depict the shared energy found between people and places, and to examine how technology distorts and relocates our physical bodies. 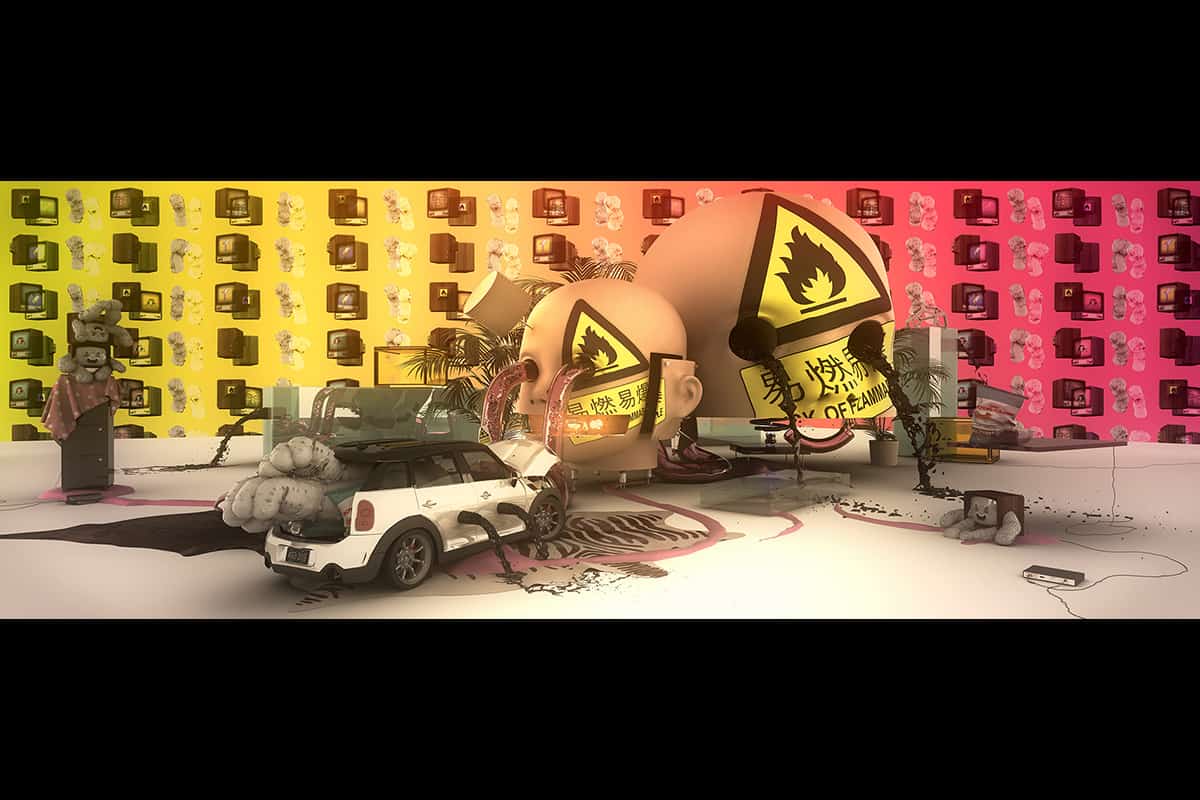 Wang is a digital media artist whose surreal, disorienting animation should really be seen in motion to be fully appreciated. In one of his video pieces, generic, vaguely Asian MIDI music backs a tableau of Hooters waitresses with C-3PO heads holding meat grinders that cascade blood onto a plastic toy figure of a man in a suit, who’s lying in a bathtub with pigs’ feet, and . . . well, it’s better to visit his website and see it for yourself.

As a Rhode Island–based digital media artist with a sculptural background, Wang has been recently rediscovering his love of working with physical materials, including 3D-printed objects. Over the coming year, he plans to experiment further with mixing multiple disciplines to discover the best ways to make his ideas real.

“He’s making work unlike what we typically see in New England, probably in part because he splits his time between the United States and China,” Stapleton says. “There’s always a narrative—usually a surprising, semi-autobiographical one—behind his work, but it never gets too personal. There’s reservation in his lavishness, and now that he’s back in the States for a while, we’re looking forward to what he will come up with.” 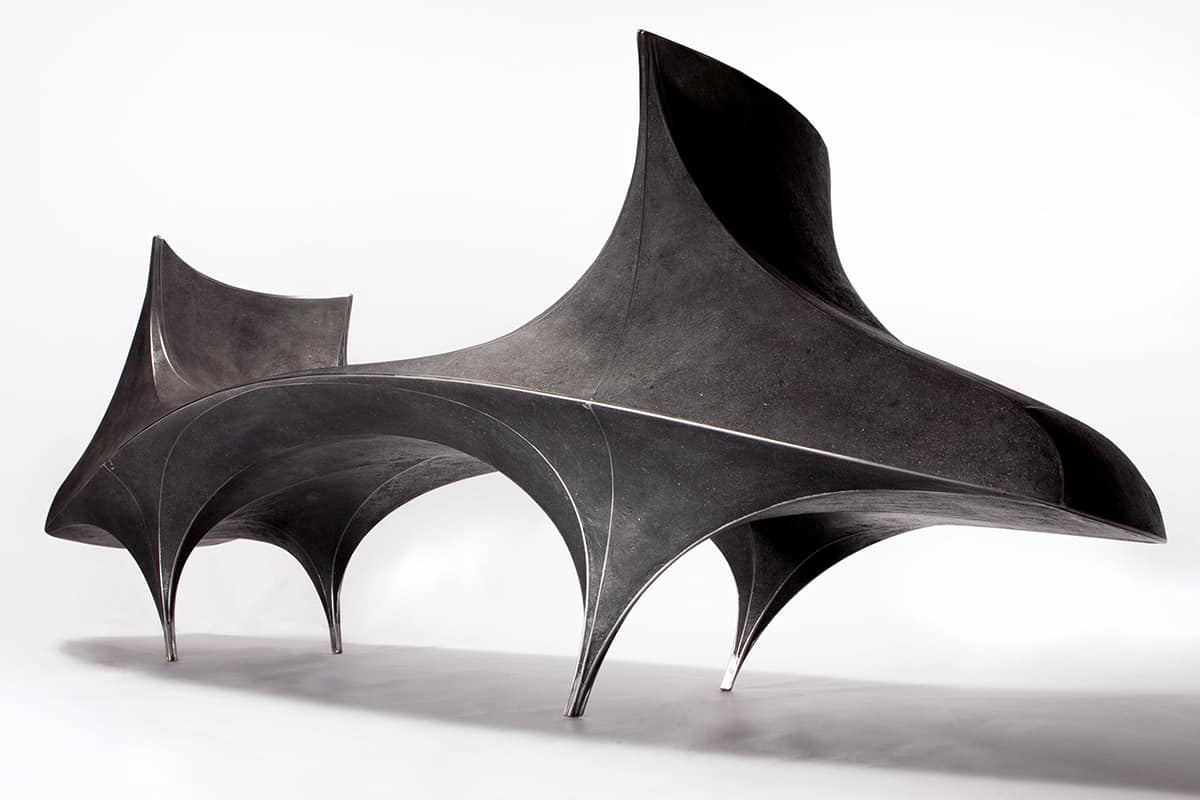 While not unknown to us—Take profiled Beer last December, following her win on Ellen’s Design Challenge, a furniture designers’ competition à la Project Runway—Beer’s work isn’t as well known as it should be. “Vivian Beer is an exciting local artist who is pushing the boundaries of furniture making,” says Chong. “Inspired by various forms, from airplanes to high heels, her industrial chic work is both strong and beautiful.”

The streamlined, retro-industrial shapes in Beer’s work are clearly informed by her 2014 Smithsonian Artist Research Fellowship at the National Air and Space Museum—a fitting place for an artist working primarily in materials such as steel, cement, and automotive paint. “Her inventive and stylish forms have crossover appeal between functional furniture and sculptural works of art,” continues Chong.

Over the last year, Beer has been sharing her appealing design skills through teaching residencies and public art commissions across the country. She also moved her furniture studio from Manchester to Pembroke, New Hampshire, where she plans to build out a space for holding design workshops. As for the work itself, Beer will be developing a line of limited-production furniture (all of her previous pieces are one-of-a-kind) in the spring. ▪