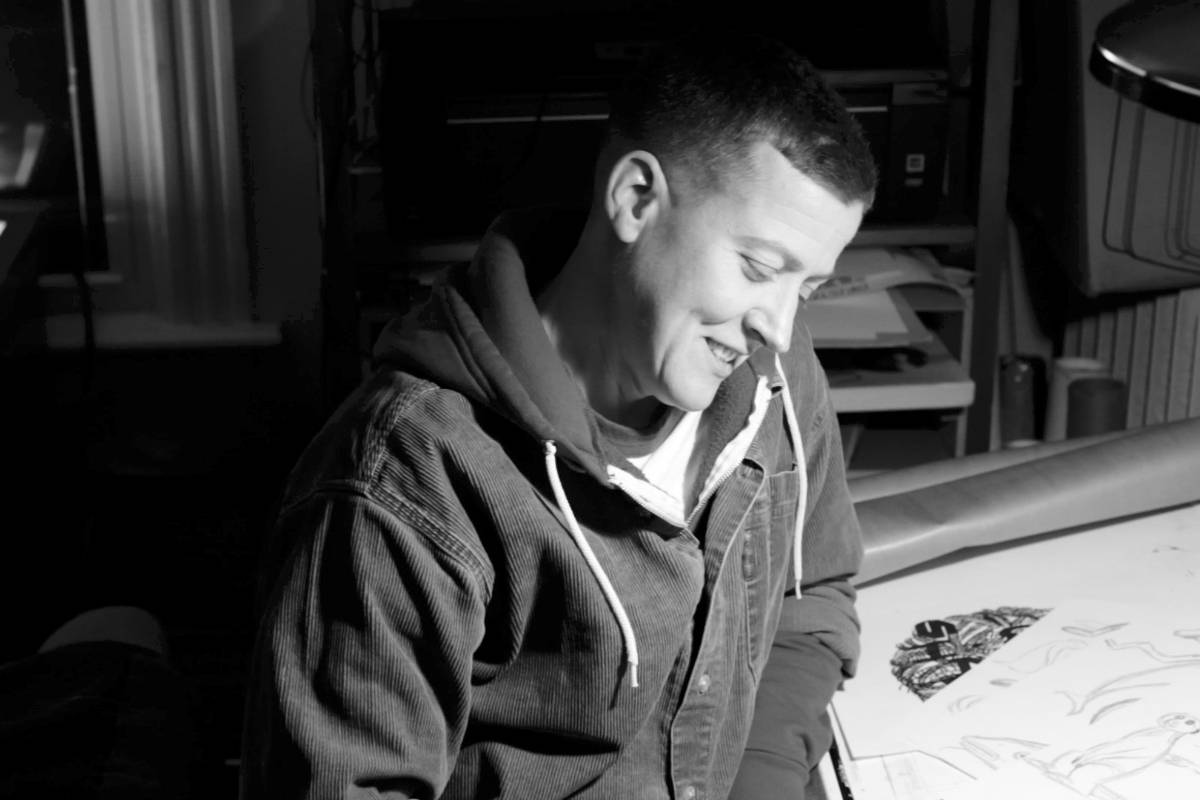 Tucked away in a book-lined hideaway on the second floor of a Northeast Providence home, AK Summers offers a strong cup of coffee and an apology for a few scattered dishes in the kitchen. Time feels slow here amid shelves filled with books and comics, walls covered with various doodles and pieces of illustrated art; her desk well worn, displaying meticulously drawn comic storyboards and old ink smears, an amalgamation of ideas coming to life.

Summers had been making comics for awhile before she got the idea to illustrate her experiences as a pregnant butch living in the bustle of New York City in the early 2000s. Following the birth of her son, she began to document her experiences in 2005. Pregnancy was enlightening to say the least. What began as a small idea eventually developed into the graphic novel Pregnant Butch, a fictionalized look through the eyes of Teak Thomasson, a butch identified lesbian who decides to embark on the wild journey of pregnancy with her femme-identified girlfriend, Vee. 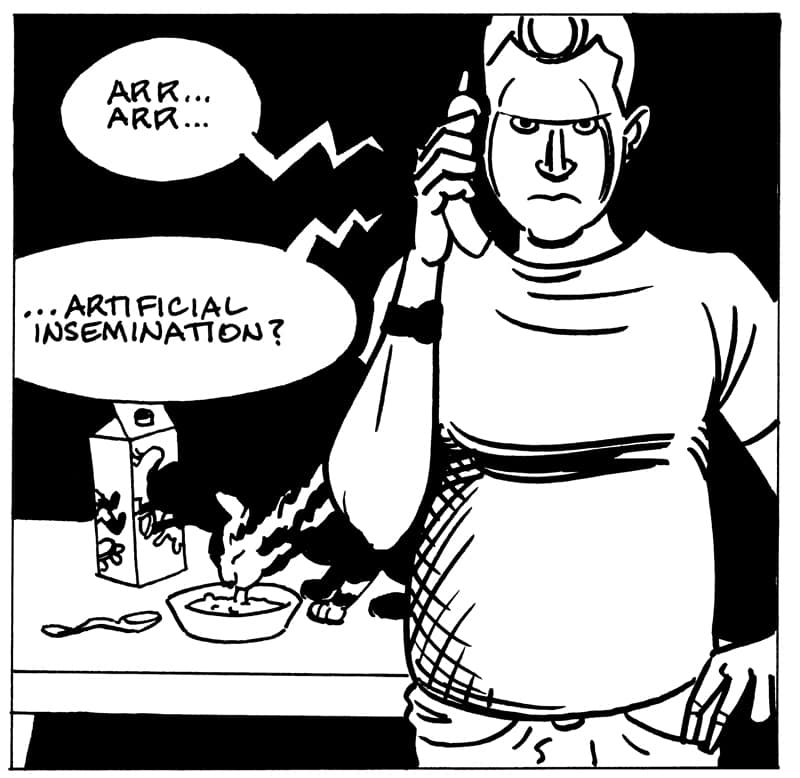 Pregnant Butch 3, Copyright © 2014 by A.K.Summers from Pregnant Butch. Reprinted by permission of Soft Skull, an imprint of Counterpoint.

“As a butch dyke, I am accustomed to feeling exempt from most things covered in your glossy women’s magazines”, read the opening lines of Pregnant Butch. “As a pregnant butch dyke, however, this heretofore irrelevant world came to include me.” Although the story is fictional, it reflects the myriad fraught, hilarious, and often uncomfortable experiences that Summers experienced while being pregnant, or as Summers puts it, “a funny, insightful and intensely personal look at the indignities of pregnancy and discomforts of gender.” 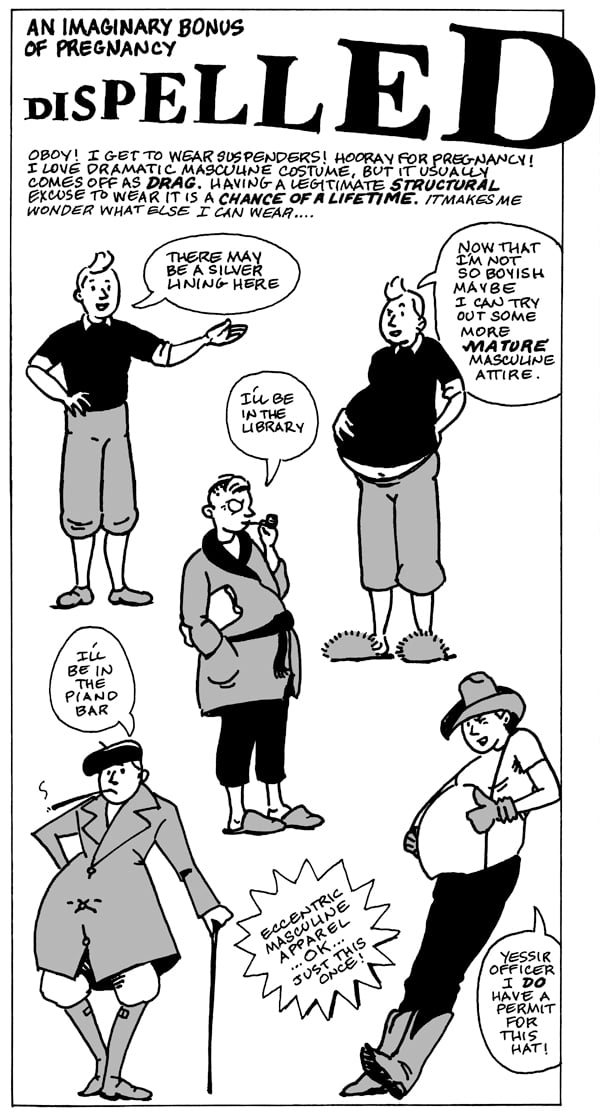 Pregnant Butch 2, Copyright © 2014 by A.K.Summers from Pregnant Butch. Reprinted by permission of Soft Skull, an imprint of Counterpoint.

From early fantasies about her masculinity seeming more pronounced with pregnancy (think beer drinkin’, big gut cowboy) to homophobic commentary from medical professionals and unsolicited commentary from strangers, Pregnant Butch is as much a comedy as it is a social commentary on “what to expect while you’re expecting.” Summers explores how easily society can fail to uphold non-traditional births, as well as social expectations of femininity from mothers. “Being pregnant was so strange because I felt like I hadn’t really been seen before, people didn’t pay attention to me,” Summers says. “But once I was pregnant, I was subject to very negative attention, and despite looking very pregnant, most people looked at my partner expecting her to be the mother even though she was thin as a rail.”

Summers is a longtime artist and creator of Negativa: Chicago’s Astute Lezbo Fantasy Mag. Her work has been published in various publications such as Mutha (an online parenting magazine) and Dennis Cooper’s Discontents: New Queer Writers. She currently lives in Providence with her 13-year-old son (also an avid comic illustrator), and is currently working on several illustration projects, including a children’s comic at the behest of her son. 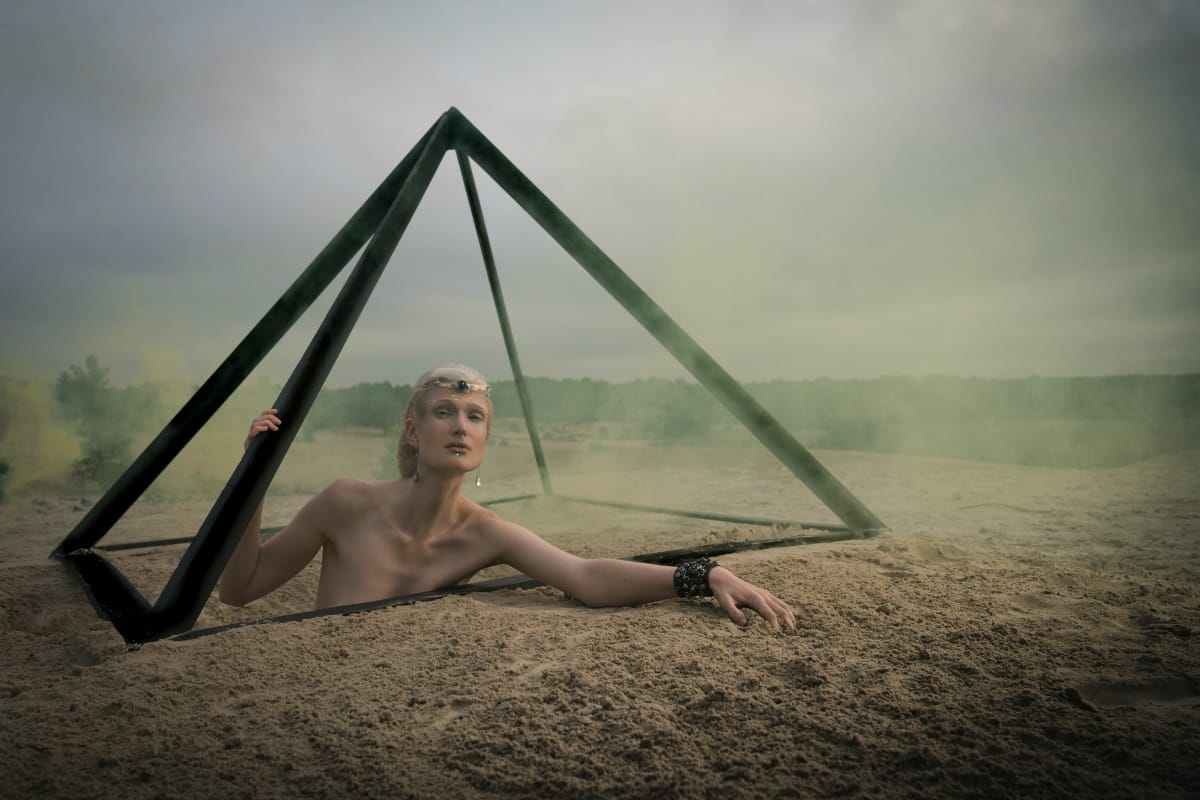