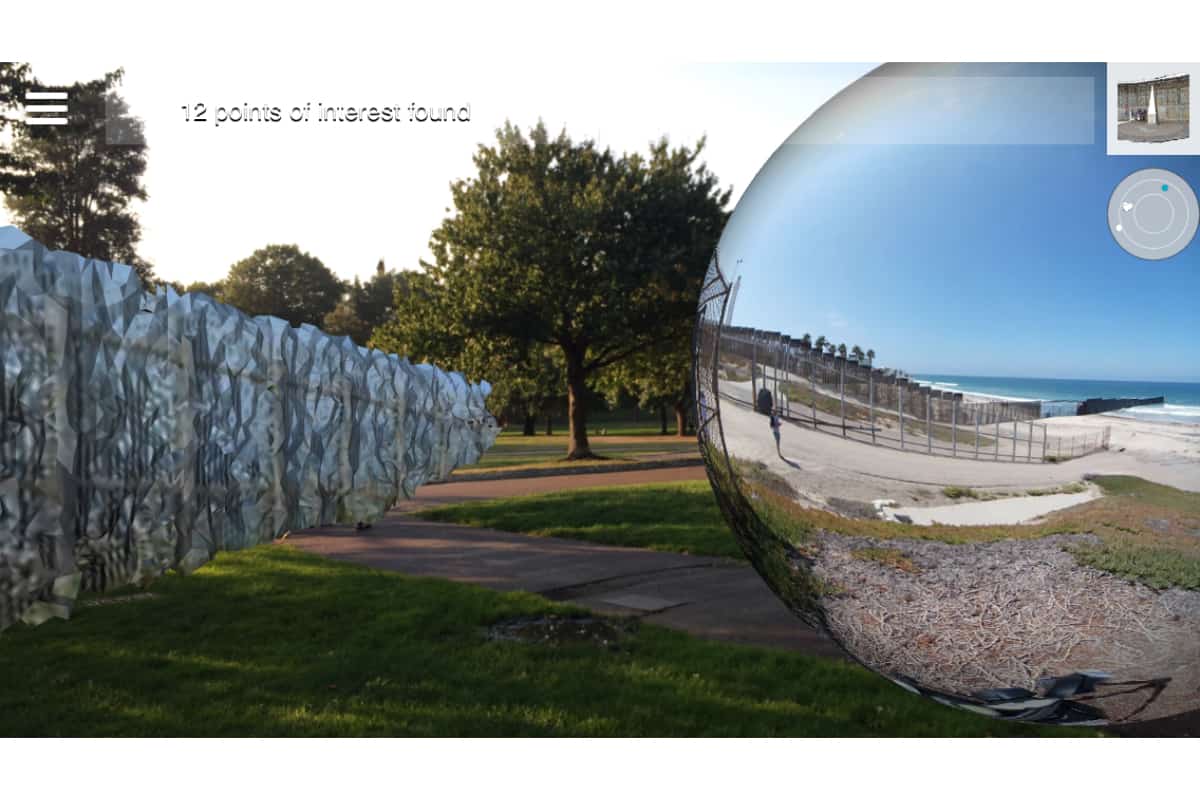 It’s hard to escape the debate over the proposed border wall with Mexico, but, if you live in New England, difficult to envision the area where it would go. New media artist John Craig Freeman has brought the U.S.-Mexico border to Boston through a technique called augmented reality (AR), or digital information integrated into the world in real time. His project, Virtual U.S. Mexico Border, enables viewers to be in two different worlds simultaneously.

A friend and I downloaded the layar app onto our iPhones and looked for the virtual wall at the Boston Common under a blue October sky. As we approached the band shell, past the hot-dog cart and tennis courts with the Prudential Center partially visible, the words 12 points of interest found appeared on our screens. We wondered if people thought we were playing Pokeman Go, which uses the same technology.

“I’m in Mexico,” my friend called out. I was a few steps behind her but soon saw it emerge: a wall decorated with a colorful mural. We walked closer, it came into focus, and then we walked through it to the U.S. side, where a barbed wire fence came up from the beach. We had the disconcerting sensation of stone-faced border guards watching us. We saw the backs of people peering through the fence to the area where friends and family from both sides can meet briefly. 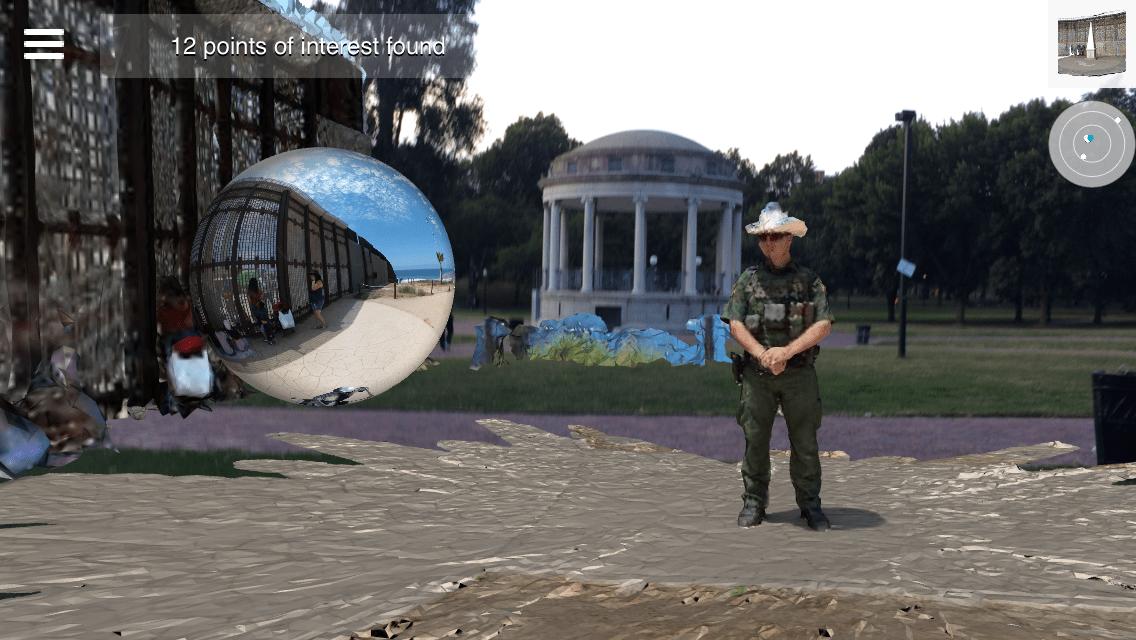 “One of the things I try to do is humanize stories that have a political theme,“ says the professor of new media art at Emerson College in Boston. “Our politics now rely on the notion of the other. Making a border is a psychological thing.”

Commissioned by the 2017 Screen City Biennial in Stavanger Norway,  the border project was his way of documenting the North American migration crisis. Shortly after he was done in Norway, he set it up in Boston.

Along with his other AR projects, it is “geo-located,” meaning he has enabled it for specific locations. He takes hundreds of photos on location, then builds the scene by using software to extract a three-dimensional model. He can replicate it anywhere, and he has no set date for taking this one down.

At the Salem Maritime National Historic Site, Freeman has another project, Virtual China and Virtual Russia, where, by being in two places at once, a viewer can experience their connectivity. In Virtual China, a mother and daughter sitting in a courtyard of a former palace can be seen during a virtual walk through the city of Wuhan in Central China. In Virtual Russia, an image of Saint Petersburg emerges piece by piece as viewers walk along designated points. Both are part of The Augmented Landscape, presented by Boston Cyberarts on view through November 30th.

“China and the Baltics were two parts of the world that were critical to Salem becoming an important port,” Freeman says. “We think of globalization and international trade as occurring now, but it has been occurring for hundreds of years.”

Seeing the pieces is not hard. Simply enable location on your smartphone or tablet. Download and launch layar app. Pull down upper left menu, tap Geo Layers, then Search Layers and search for Salem Art or US/Mexico Border. 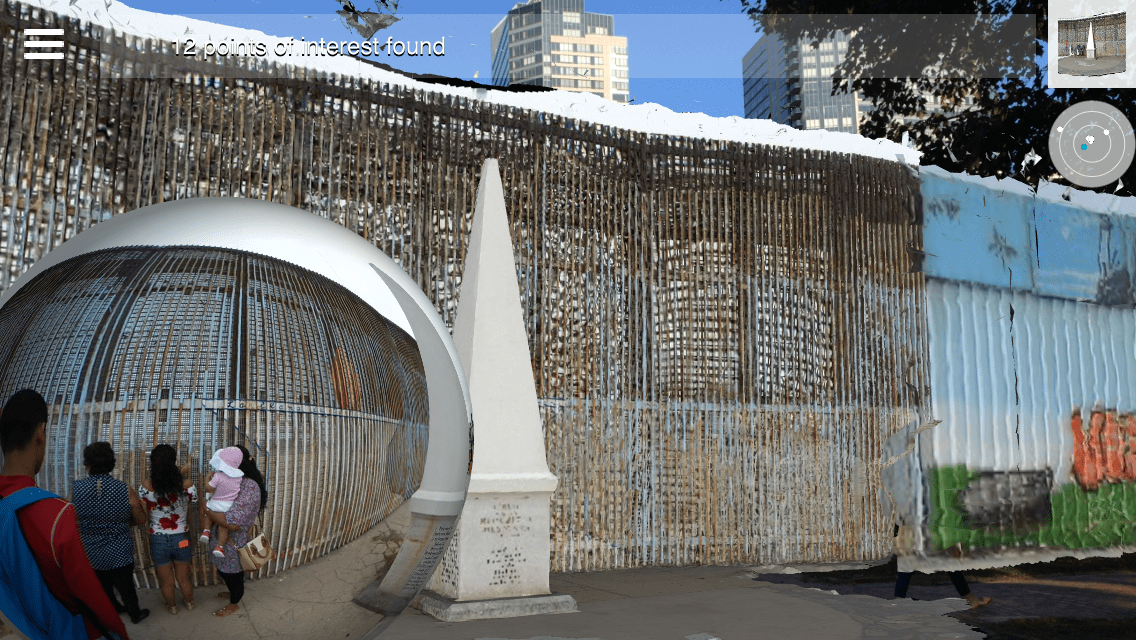 Studying painting, drawing, sculpture, and photography at the University of California, San Diego, followed by a master’s at the University of Colorado, Boulder, Freeman soon realized that he was not cut out for conventional art that he would need to market. Instead, he wanted to make public art “to address the social and political issues of our time.”

Then the internet became a public square. “We saw the migration of the public square to everywhere but nowhere,” he says. “I followed it down the rabbit hole to mobile networks and turned to the quest to create new forms of art.”

A native of San Diego, Calif., Freeman lives in Windham, N.H. His work isn’t so much influenced by where he lives as by “how digital networked technology is transforming our sense of place,” he says.