Named president in the spring of 2017, the journalist, creative entrepreneur, and world traveler Laura Freid is in her first full semester at the helm of Portland’s Maine College of Art, the state’s sole accredited visual arts institution. The former publisher of Harvard Magazine, who last year ended a 12-year run as CEO of Yo-Yo Ma’s Silkroad project where she traveled for 4,280 days with a troupe of 30 classical musicians, artists, and production staff performing through the U.S., Europe, and Asia, Freid has lived a lot of lives.

As she charts the next path for the private arts institution in the heart of the fast-growing port city, we spoke with her about empathy, political responsibility, and how to get artists and businesspeople to play together.

Take: You have a degree in philosophy of aesthetics, you wrote the narrative for Silkroad’s The Music of Strangers documentary, and you traveled for 12 years with a touring troupe of classical musicians. Do you think of yourself as an academic or an artist?

Laura Freid: I like to illustrate without words what cultural harmony would look like. I feel like once people get attached to something, like an idea, they can’t see another person’s point of view—particularly when using words. Through art or music is how to get people’s hearts engaged. I feel like I’m still a storyteller. I’m very visual, but I have a standard of excellence that’s higher than my mind-hand coordination. Growing up, I was always asking, Why is that? Why does it inspire us? Why is it something that gives us hope? We all need hope. It’s an existential quest.

T: Can you walk us through how you first connected with Yo-Yo Ma?
LF: I wrote an article about Yo-Yo and other thought leaders for Bostonia Magazine. At the end of the interview, I asked, ‘What do you really want to do beyond being the best cellist in the world?’ He said, ‘Y’know, I really want to unite the world through music.’

He had studied anthropology at Harvard and is fascinated by people and cultures. Years later, he called and asked, ‘So, do you wanna do that thing?’ A friend who is an art historian had described the idea as a kind of Silk Road, where people a thousand years ago couldn’t speak the same language but they’d share or trade art along the road. That’s what this is really all about.

So I became the CEO. I’m not a musician; he didn’t need another musician. I worked on the story—what happens when strangers meet, when we look for something in common. We think of classical music as starting in Italy in the 1700s, but in China, Persia, and India, classical music started thousands of years ago. Nobody remembers who the kings were or what the politics were at the time. You remember Beethoven or Mick Jagger or DaVinci. Art is the through-line that connects our cultures.

T: What was it that attracted you to MECA?
LF: The musicians we worked with who were in their twenties when we started were now in their forties, many of them with children of their own now. I realized that I really like that 18-to 24-year-old time period where everything comes together and you become this person you are today. I wanted to get back to student creativity and help artists in this crazy world where the economy doesn’t support creative art makers very well. I started asking, couldn’t we have some creative entrepreneurship? Couldn’t we encourage people who have money and people who are creative to start working together in their twenties and not in their sixties? There were patrons of the arts years ago. And up until recently there was a lot of government support. In our country, art has corporate support, but corporate support started eroding 10 years ago after the financial crisis and it has been a free-for-all since then. I wanted to encourage that creative entrepreneurship.

I got a call about MECA, and I thought their mission statement sounds like mine—artistic excellence, creative entrepreneurship, artists at work. I didn’t even really know about the college. I think people in Maine are really aware that it’s Maine’s only accredited visual arts college, but it would benefit if people beyond Maine knew about it.

I went through orientation with the first-year students. Entering students can decide to take one of six courses. One is “A Field Guide to the New World.” It talks about new ideas and solutions for the changing environment and they read [Rebecca Solnit’s] A Field Guide to Getting Lost. They include fundamental drawing, painting, and bookmaking in their eventual field guide, but start in the environment. Another is called “Slow Fashion: Fibrous Fashion and the Farm.” Just like slow cooking, this is about how to connect fashion close to the fabric and the dyes. Another is “Species of Spaces,” which asks what are the characteristics of the spaces we inhabit? How do our senses affect our experiences with them? Why am I claustrophobic and you’re not? All end results of these courses are drawing and writing and abstract art-making, but it starts with these kinds of essential questions. 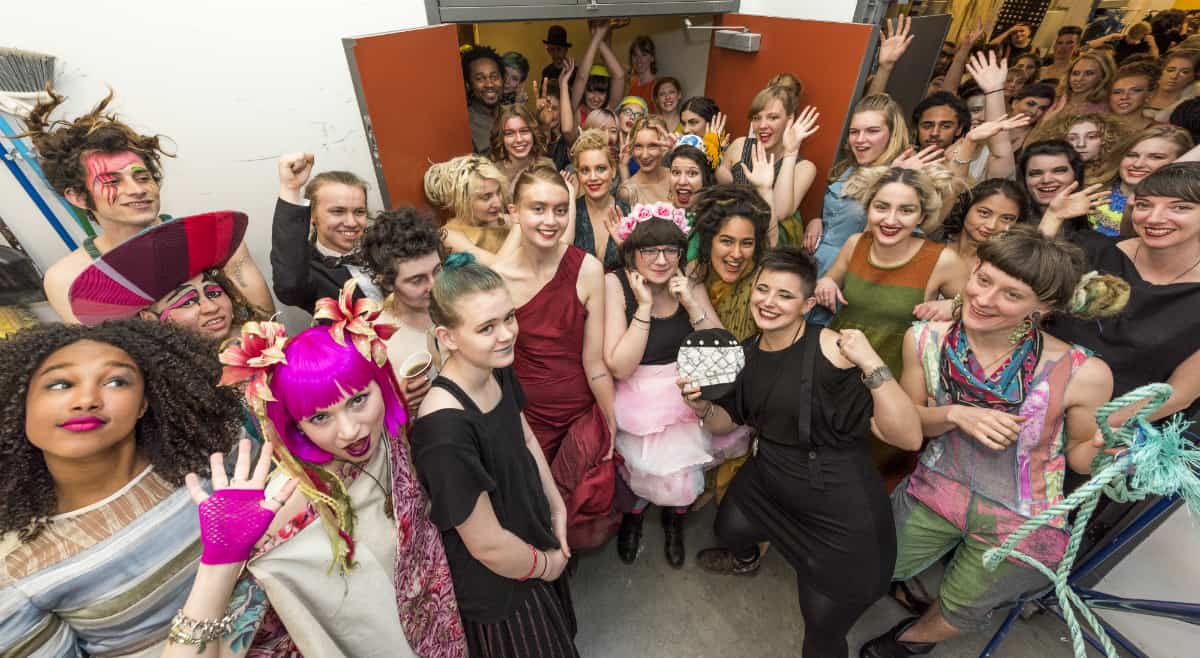 T: With Silkroad, you worked on a global scale, forming partnerships with RISD and Harvard Business School. Why?
LF: I really like artist environments. My thought was that we could connect the Harvard campus through the arts. Traditionally, Harvard had not been into the practice of the arts. It’s very theoretical, very academic. It turned out to be a great collaboration, and as I started thinking about the business-art connection, we created a challenge for artists and businesspeople to work together and create new ideas.

T: Did the cross-pollination of artists and businesspeople take off immediately?
LF: Y’know, there’s some natural antipathy toward suits [among artists]. There’s a creative versus business, church-and-state feeling. From business too. I think with any cross-cultural navigation, you have to develop trust. The musicians did some instant concerts, where Silkroad musicians including a bagpiper from Galicia, Spain, a drummer from India, and a sheng player from China would perform on campus, and then we’d have a conversation about it. Turns out a lot of students at the Harvard Business School come from different cultures and were really excited for that conversation. First you have to establish trust, and then have some fun together, get to know each other, and then you can start working together.

T: How do you see MECA students integrating into the community post-graduation?
LF: I think we’re lucky that Jessica Tomlinson and the Artists at Work office here encourages internships and experiences. I’ve been to some campuses that are beautiful, but [students] aren’t near any cities—they’re in a cocoon. That can be a great way to learn, but if you’re an artist learning in an urban environment, you’re interning, you’re performing, you’re doing public art, you’re speaking at the museum.

When I interviewed here, I stayed at the Press Hotel. Erin Hutton [class of ’98; artist and director of special projects at the ICA at MECA] did the typewriter display there. Have you seen it?

T: That’s the most memorable thing about that place!
LF: I used to use one of those typewriters. I wish I still had it. I love to look at edits on old manuscripts and rare books. I miss looking at old drafts in the digital age.

T: I know, there’s just a flattening of experience with computers.
LF: Yeah, the texture of creativity is gone.

T: Yeah. I find that it’s hard to recall information that I process through a computer because I’m always in the same position when I’m consuming it.
LF: There’s some research I just read about that. I googled it, and there’s definitely less retention of information if you’re taking notes on a computer. My first articles were all written by hand in coffee shops. I think it’s a romantic notion, but it actually helps retention, too.

T: I read a distressing thing about how humans are losing their facial empathetic response instinct. Before, when we learned something shocking we’d often be in dialogue with somebody, so we’d have this natural facial reaction to convey that. Now, I’ll read horrifying tweets or something, but there’s nobody I’m expressing anything with my face to, so I’m learning to feel shock while having a blank face.
LF: One of the reasons I love the arts is that our culture has an empathy deficit. Art brings us back to that home button. You see something and immediately feel the empathy you should have felt when you might have felt it [in real time]. I hope more and more students consider a visual arts education, because I don’t know what society is going to look like when you can’t see expressions of empathy. Or facial expressions of any kind.

T: You posted a response to President Trump’s DACA repeal in September. You don’t see a lot of institutional heads doing that.
LF: Well, my first response was that a college is a community. I just wanted people to know that we care about them. I have to say that I’m shocked [in these days] that I have to speak out against things like racism. But once you realize you do, then you must. The students, they’re 18-22; they’re vulnerable. These people were kids during 9/11, then there was an economic crash—it’s already not the sort of world where you can feel very secure. Then you have political power threatening your existence and the existence of your friends. There are things we can do, and what we have to do is note it and stand together.