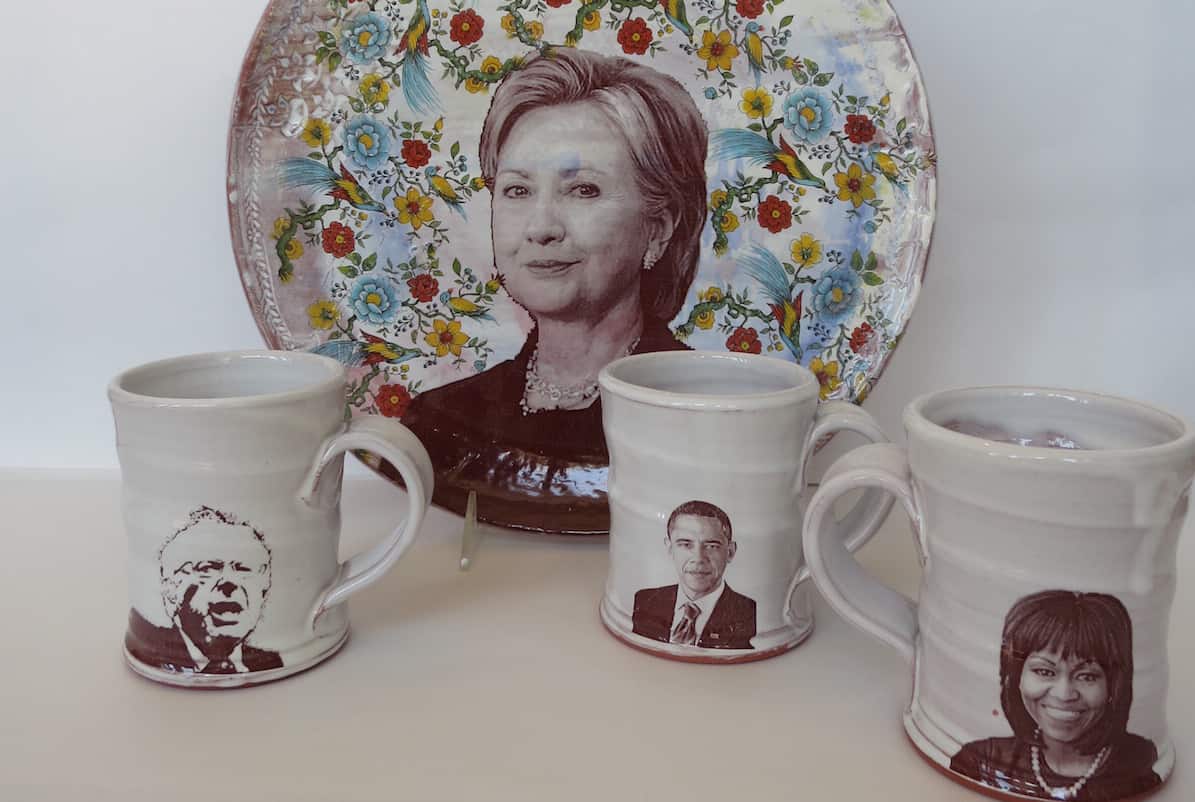 Justin Rothshank is making several stops on a tour of Massachusetts this week with his political, pop culture-aware pottery.

For Indiana potter Justin Rothshank, working in clay is a form of social justice advocacy. This may not come as surprise to you if you’ve seen his hand-thrown, terra-cotta tableware donning images of pop culture and political celebrities such as Hillary Clinton, Abraham Lincoln, Justice Ginsberg, Beyoncé, Bernie Sanders, and Betty White. If you’ve seen his stoneware pottery, beautifully embellished with vintage-style flora and fauna imagery, you might have picked up on the anti-war tone of his poppy motifs. If his work is completely new to you, it’s my pleasure to make this introduction, and to invite you to meet him and see his work in person this month as he makes appearances throughout Massachusetts. 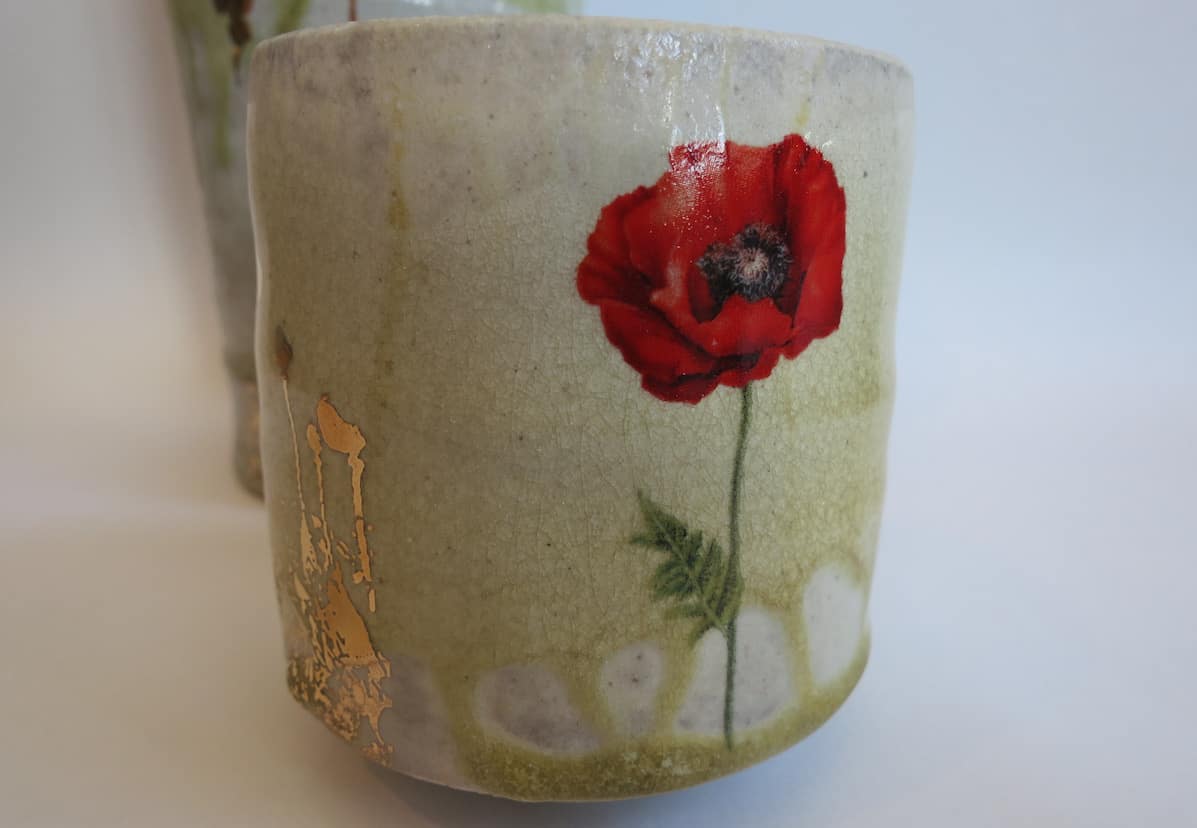 Ever since his first experience with ceramics, Justin’s work has reflected his conviction that pottery can be an agent of community building and social change not only through its use, but also through the process of creating it. His high-school teacher introduced him to firing pottery in a wood-fueled kiln. This kind of firing can last from one day to two weeks depending on the size of the kiln, and typically relies on a community of local potters, friends, and neighbors for assistance.

Justin fires his own wood-fueled kiln regularly. Firing this way allows the direct touch of flame on the clay, giving his pots rich, varied surfaces, which become the canvas – or landscape – for his imagery, which is applied as ceramic decals in an additional electric-kiln firing. For Justin, an equally important part of creating these beautiful objects is the rich, varied dialog of the people who gather to fire the kiln.

In the early 2000s, Justin and several other young artists founded The Union Project, a community clay studio, in Pittsburgh. Justin dedicated nine years to running this non-profit, which is still in operation today, and has given thousands of people an opportunity to connect to each other through ceramics and other arts. 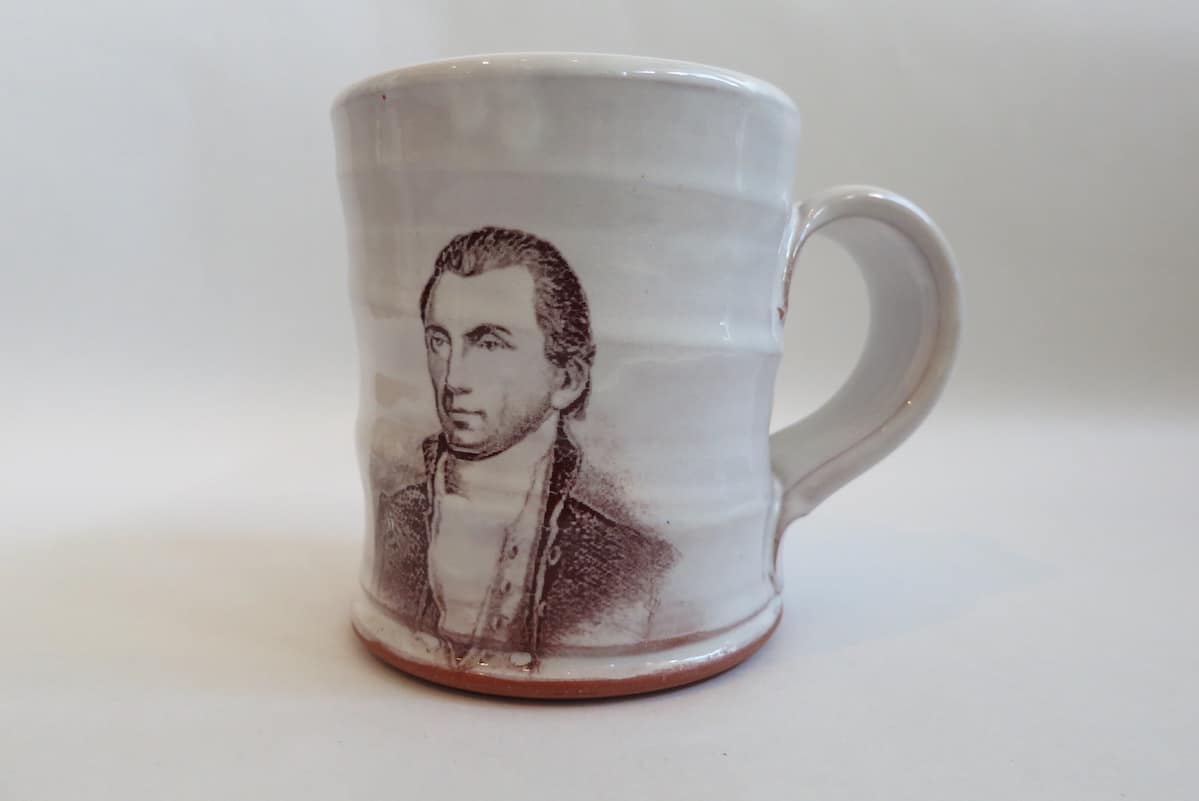 While at The Union Project in 2007, Rothshank began his line of electric-kiln-fired “presidential ware,” just as the fervor of the 2008 election was on the rise. The vintage look of the soft-toned decals underscored the approachability of the wares despite its loaded (and appropriated) portraiture. Over the last eight years, he’s expanded his imagery to include other historical figures, celebrities, and pop culture iconography. As the next election looms, Justin’s utilitarian wares are ripe catalysts for political discourse.

Join in a dialog with Justin October 13th at The Office for the Arts at Harvard, Ceramics Studio, as Justin gives a one-day workshop and lecture, at Pinch gallery October 14th for Northampton Arts Night Out, or at Ferrin Contemporary gallery on October 15th as a part of Know Justice, a two-person show with his wife, Brooke Rothshank, an equally accomplished artist (and more popular; he has 14K followers on Instagram, she has nearly 77K), which runs through November 13th.

Elenor Wilson is a Northampton, MA-based potter who also works as Editor of the Studio Potter journal.