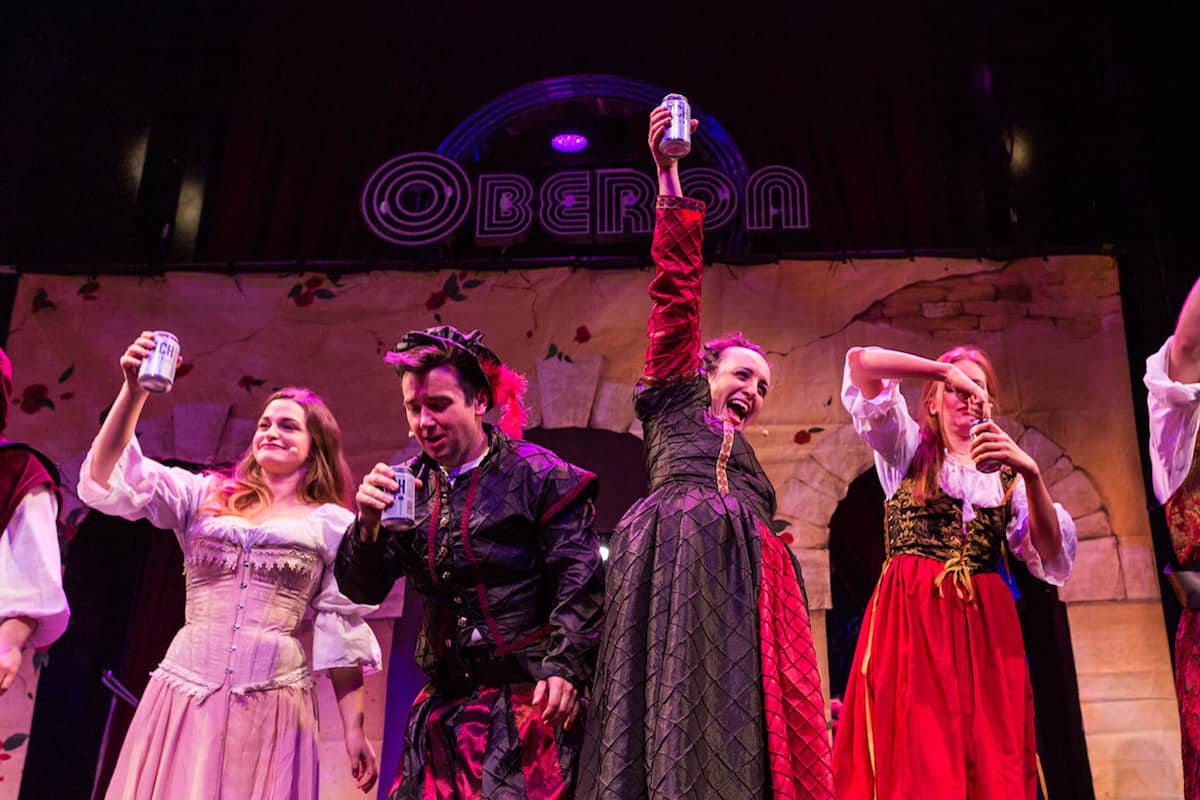 What happens when you mix a bottle of whiskey with the most revered playwright of the 16th century? Shit-faced Shakespeare.

It’s the one-year anniversary of her troupe’s run of performances, and Kaylyn Bancroft can’t remember her lines. She’s stammering and uneasy on her feet while attempting to portray Beatrice in Much Ado About Nothing. Her fellow performers look on, unsure if they should move the scene along or wait for her to remember. It’s a moment actors and audiences fear, causing a tension that can quickly become unbearable. But instead of cringing, the audience is rapt and bursting with laughter. What causes a trained professional to not only butcher Shakespeare, but to be cheered on for doing so? In Bancroft’s case, two pints of beer, one bottle of wine, and a quarter of a bottle of whiskey seem to do the trick. 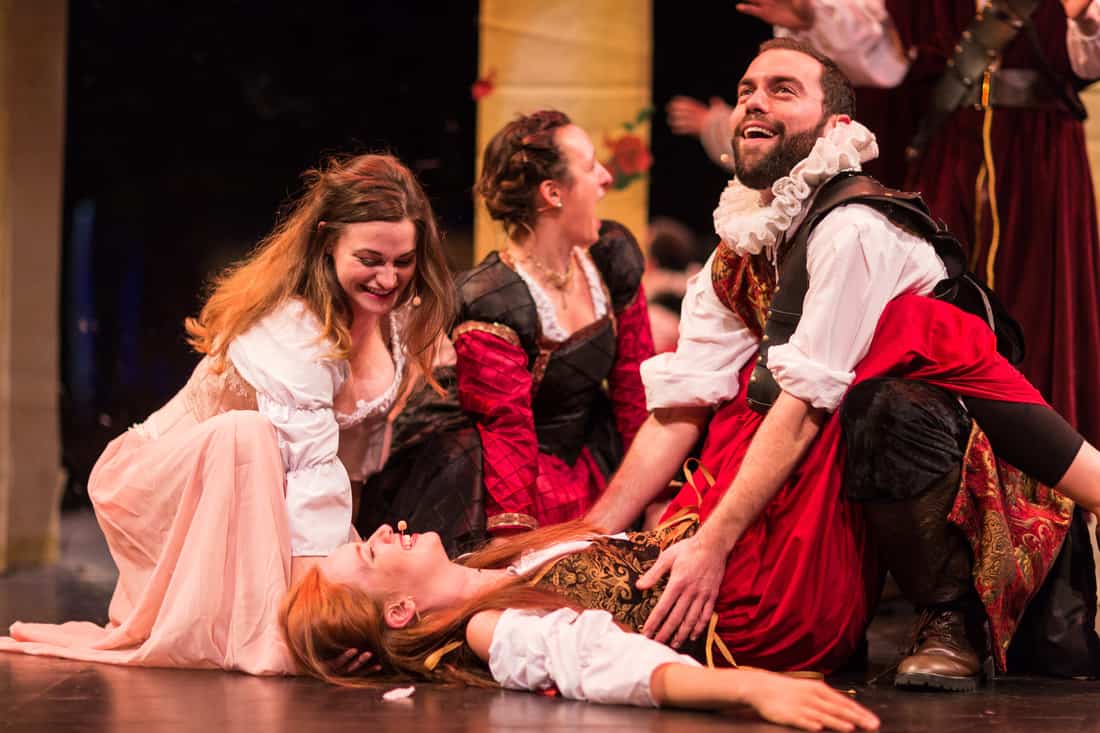 Shit-faced Shakespeare, performed every weekend through May at the Davis Square Theater in Somerville, Massachusetts, and at Laugh Boston through June, is a simple enough concept: What happens if you get a professional actor thoroughly drunk and let him/her wreak havoc on one of William Shakespeare’s plays? The result is ingenious. The sober actors provide a masterful balance of improv and corralling the drunk, knowing exactly when to go with the bit and when to make sure the narrative progresses. The drunk actor rotates with every performance, giving the show a nearly limitless potential for return viewings. Magnificent Bastards Productions, the company behind the endeavor, has pared down plays such as Much Ado About Nothing and A Midsummer’s Night Dream into hour-long renditions capable of handling a main character being incapacitated while still conveying the general plot.

The productions are a thoroughly modern take on the Bard’s work that harken back to the lively experience of attending the Globe Theatre. The audience at a Shit-faced Shakespeare performance has much more in common with the groundlings (the lower classes who stood on the ground in front of the stage to watch Elizabethan-era plays) than with contemporary theatergoers of Hamlet or Macbeth. Instead of politely clapping and lightly chuckling, the audience becomes part of the experience. At the beginning of the show, two members of the crowd are given the power to stop the performance at any time and force another beer on the hapless actor (who usually reacts with a mix of feigned and real Charlie Brown-style dejection). This jovial and chaotic atmosphere does something pretty remarkable: it shines a new light on a pillar of the Western canon. 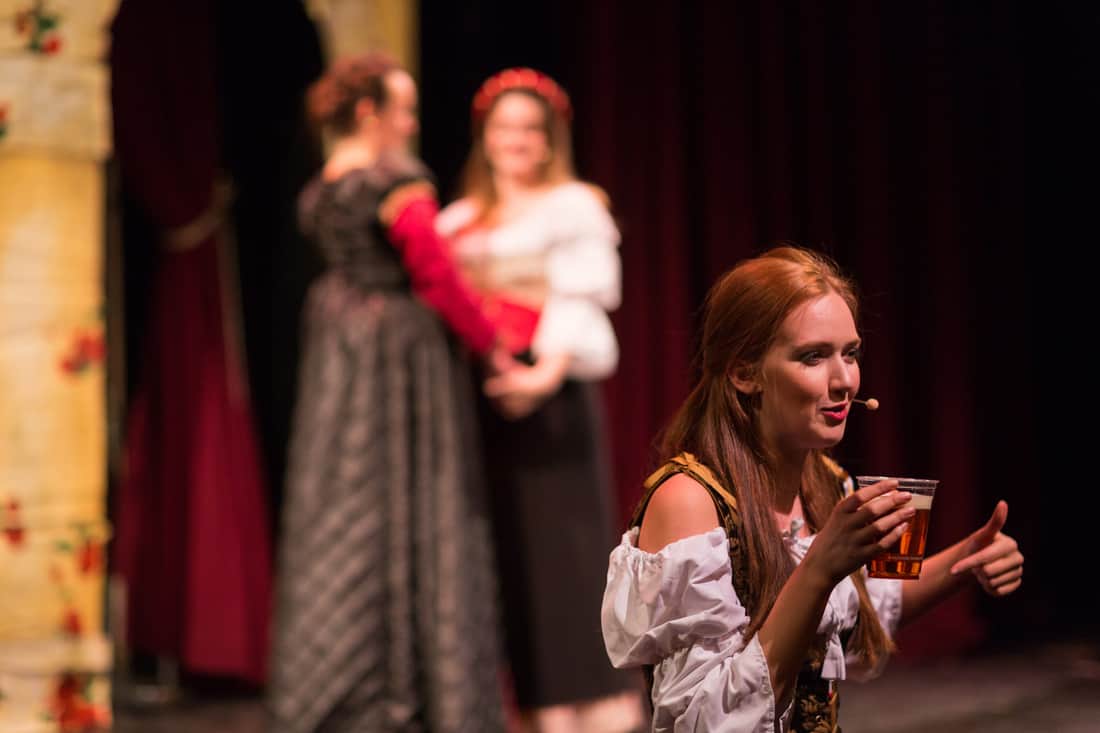 There’s a difference between gut-reaction humor and simply knowing something is funny. It’s the difference that explains the disconnect modern audiences feel with Shakespeare. Very few people in the 21st century have a visceral, instinctive reaction to a line intended to stir 17th-century sensibilities. Cast member Mac Young, who has also performed in traditional productions of Shakespeare, notes, “I’ve seen a lot of productions where I recognize [the material] as bawdy humor, but I’m not actually laughing.” Shit-faced Shakespeare, he says, “[Gives] energy back to the humor Shakespeare has already built in to these plays.”

The genius of the show is the way it deconstructs and dismantles a cultural institution. But it’s a loving undertaking, like a carpenter taking down a house brick by brick to show the craft and care that went into building it. Shakespeare died 400 years ago this month, but the crew of Shit-faced Shakespeare ensure that his work not only survives, it thrives.