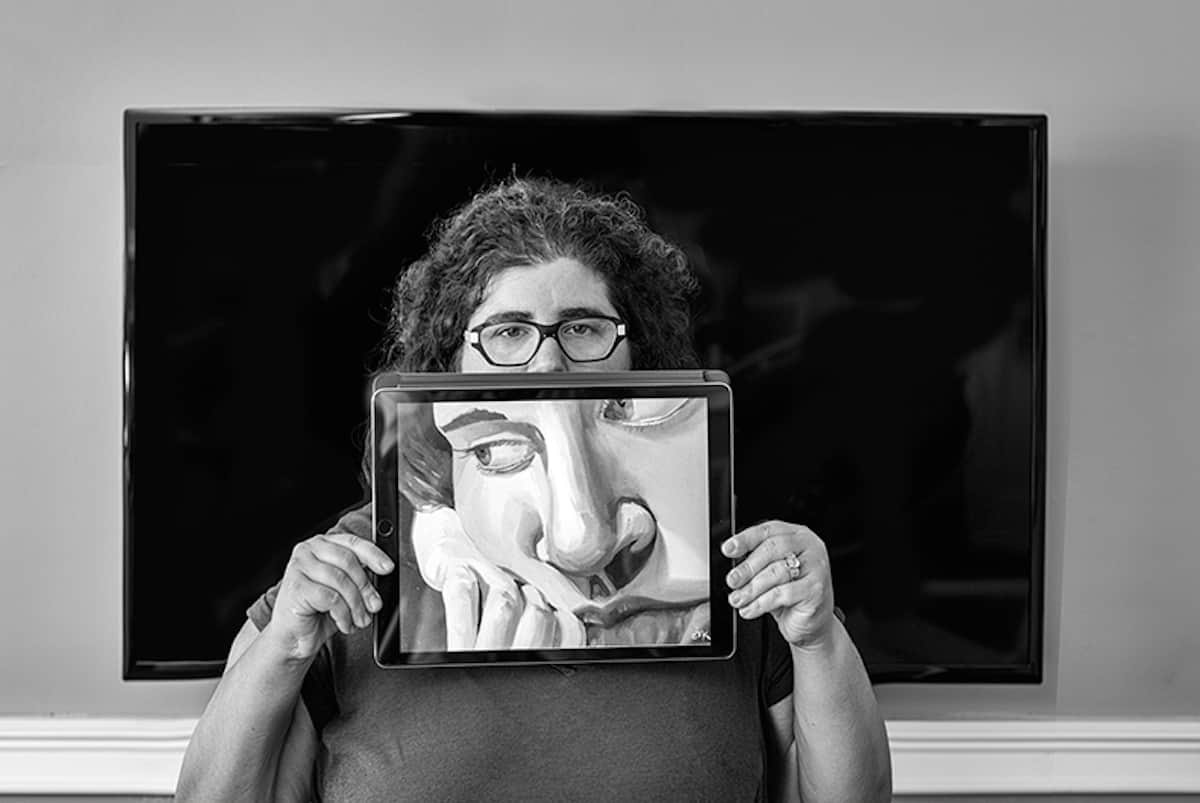 The aptly named Goldsmith uses metal elements in his development process to show us how two colors can capture so much.

Jay Goldsmith is a full-time photographer working in Portsmouth NH and had been shooting environmental and family portraits since 1981. Last year, inspired by artists like Arnold Newman, Jay decided to shoot portraits of local artists and feature the portraits alongside their work as a way to create visibility for the creators in his community. 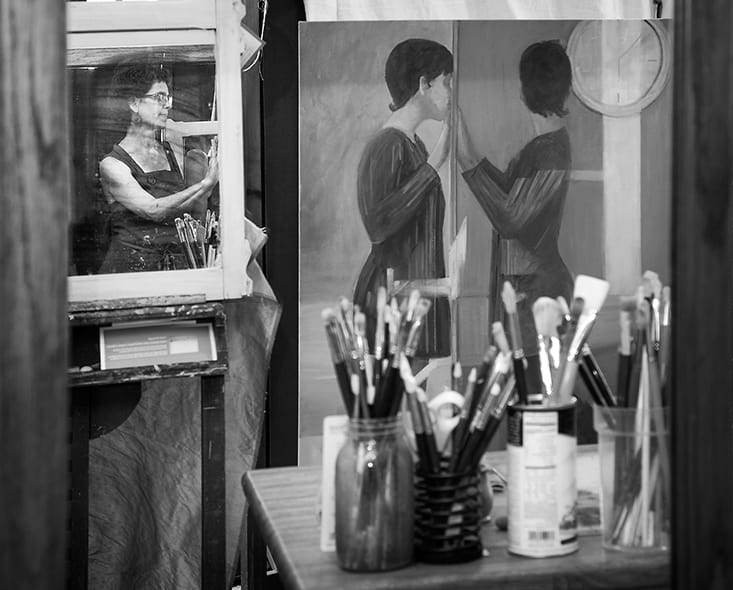 Goldsmith and others thought that this sort of project would be important and lead to interesting and unexpected artistic outcomes. Primarily, as Goldsmith pointed out, because other artists tend to be good collaborators, “The people I talked to thought artists would be good subjects as opposed to politicians, lawyers, or any other group. I wanted some coherence among the sitters.” 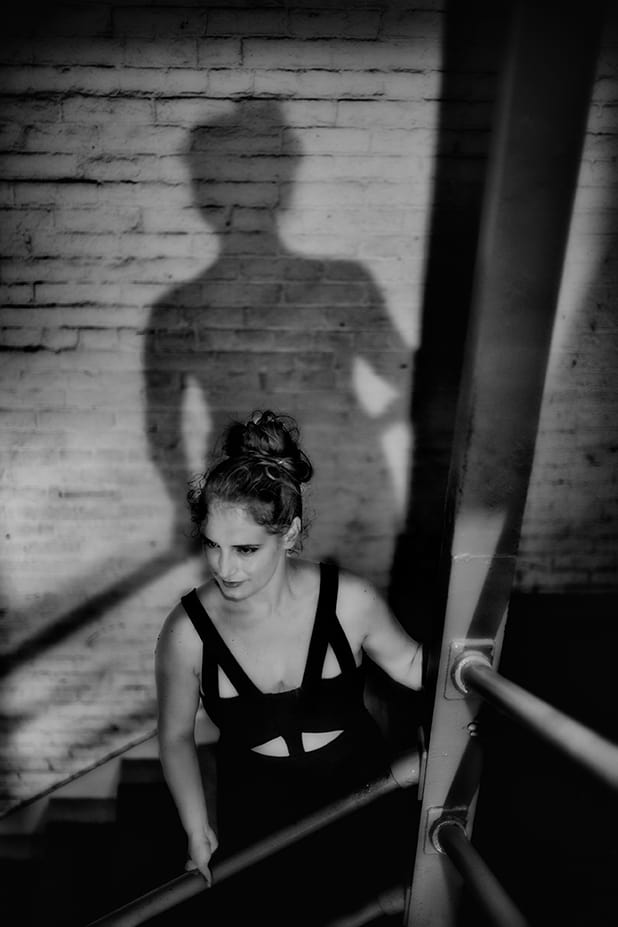 Goldsmith’s process for portrait-making marries 19th-century styles with 21st-century technology. Rather than using film, Goldsmith shoots these portraits with a digital camera, then using the Precision Digital Negatives program, creates a platinum/palladium print from the digital negative produced. According to Jay, this process, “…takes the hit or miss out of making prints…as oppose to making seven, eight or nine prints and seeing what you need to make the perfect print.” It is then printed on high-quality, super stable, hand-made paper. This black and white format is a favorite of collectors for its broad tonal range.

This year, in collaboration with Discover Portsmouth, Goldsmith plans to continue this project in a slightly different way. The artist is already beginning to shoot portraits of other local creatives, but this time, the photo sessions will be conducted in the artist’s studios and spaces, hearkening back to his environmental portraiture roots. The spaces featured in the upcoming portrait series range from humble studios to beautiful homes, creating a revealing location contrast, “I get to see all these different and interesting artists spaces, which is really fun.” 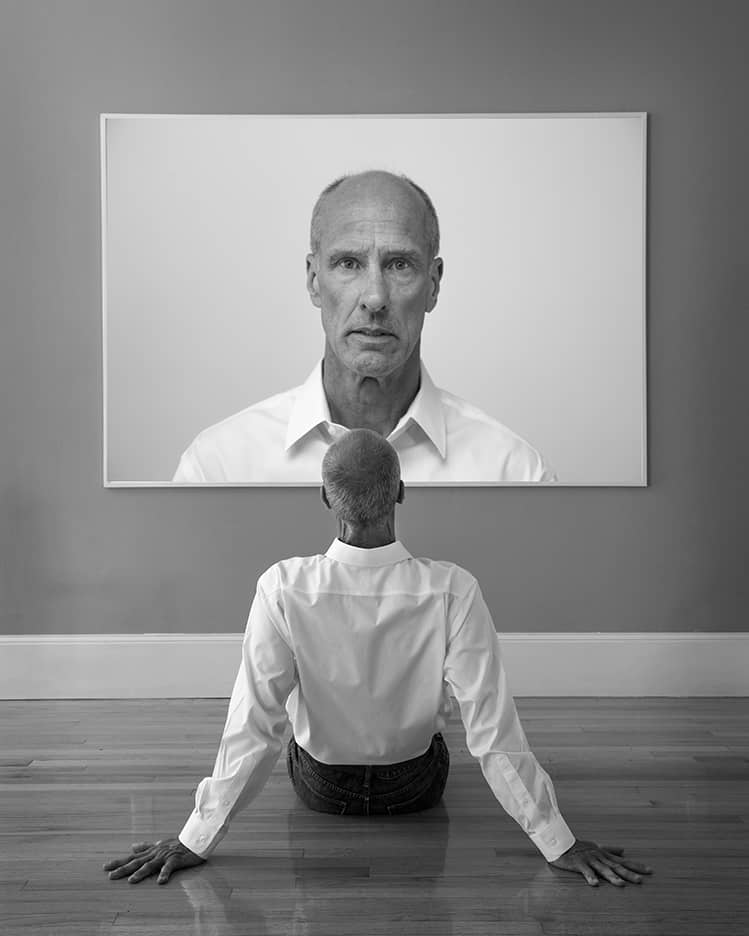 Self Portrait | Photo by Jay Goldsmith

Jay Goldsmith is a photographer living in Portsmouth, New Hampshire. The exhibition featuring his artist portraits will be on view at Discover Portsmouth November 4 through December 23, 2016. Sponsored by Brown & Company Design & Devine Marketing Group

John ArvanitisSo…What Does a Portsmouth Artist Really Look Like?08.29.2016