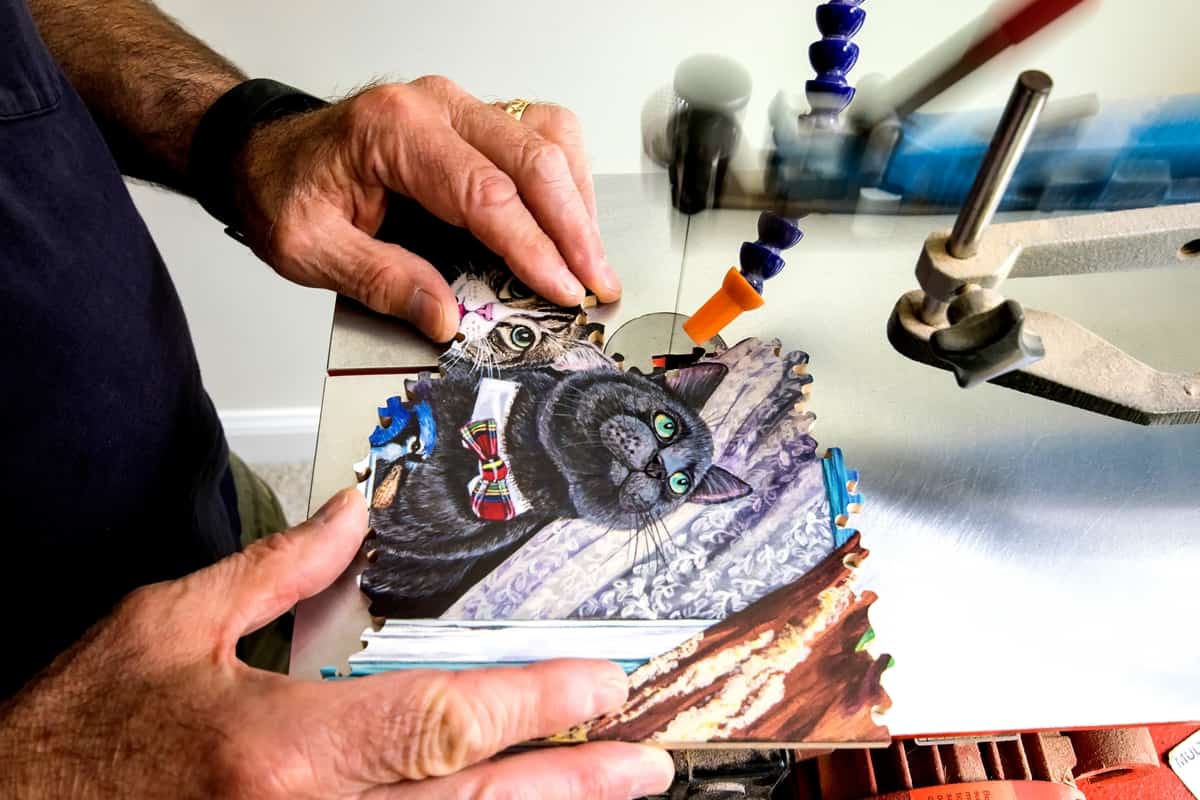 Jay Hollis is living the dream – translating the skills and dispositions he’s honed in his life-long career to a craft that’s innovative, analogue and personally satisfying. You can easily picture Jay at a drafting table measuring plans and prints and piecing together a design for a building just as easily as you can picture him bisecting edge and corner pieces for his intricate, challenging hand-crafted wooden jigsaw puzzles. 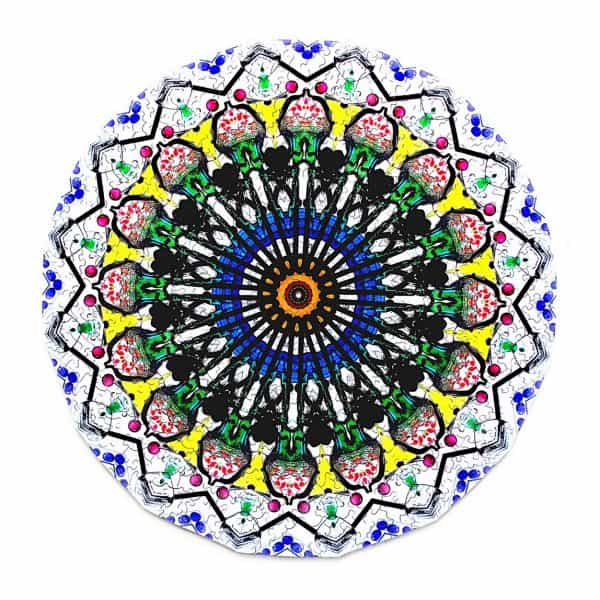 “Sweeet 16″ 18” diameter, 850 pieces “Talk about difficult. I assembled it once. After I completed it I thought to myself, I would never give this puzzle to a good friend to put together. A maddening experience.”

Jay’s initial foray into the world of puzzle-building started almost two decades ago when a chance encounter with a fellow dog-walker lead him to the back corner of a craft show in Concord, Massachusetts. He met an elderly women who showed him the craft of puzzle-making, and Jay was immediately hooked, “I bought myself a saw, some plywood and starting cutting puzzles with the intent that I’d make puzzles for my daughter to help her cope with ADD. This was about 18 years ago. The first few puzzles I made were absolutely crude.”

Today,  Jay Hollis’s hand-crafted wooden jigsaw puzzles are exceptionally more nuanced and sophisticated. According to the artist, he’s pioneered a technique for transferring images onto the plywood base that is unique within the context of his industry, creating an image that is richer and more durable relative to the normative practices of his puzzle-building peers, “Most people who make jigsaw puzzles take a paper image, mount it on to plywood then cut the image into piece for the puzzle. Unfortunately, over time, the paper starts to peel off or degrade, which always bothered me. Over the past couple of years…I’ve been coating the plywood with epoxy, almost like a new finish on the wood, then I have a printer take a digital file and print the image right on to the plywood…the image goes right into the surface of the epoxy.” This process, inspired by wooden sign-makers, creates the illusion that the original image was painted directly onto the wood. 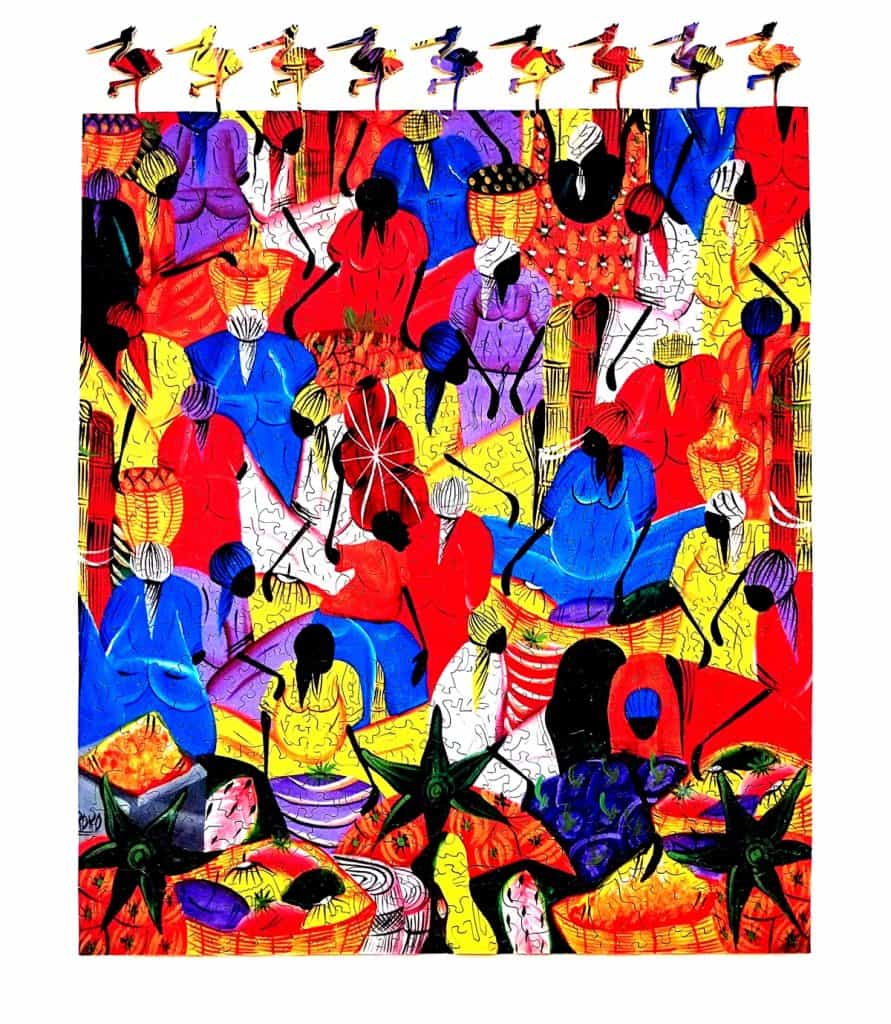 Not only does Jay have a unique process for printing these puzzles, he also implements classic tricks-of-the-trade to make his puzzles a bit more challenging than your classic Barnes & Noble cardboard set up. Think you can easily track down some of those reliable corner pieces? Think again. Hollis purposefully bisects corner pieces, making them appear triangular instead of having two easily identifiable adjoining edges. Furthermore, Jay buries edge pieces in the intricate designs, making the most reliable parts of the puzzling experience quite challenging. This might seem a bit vindictive, but, according to Jay, “When people buy a wooden jigsaw puzzle, they sort of graduated from doing cardboard puzzles to doing wooden puzzles. The expectation is that it’ll be more difficult, though not impossible, and one-of-a-kind.” 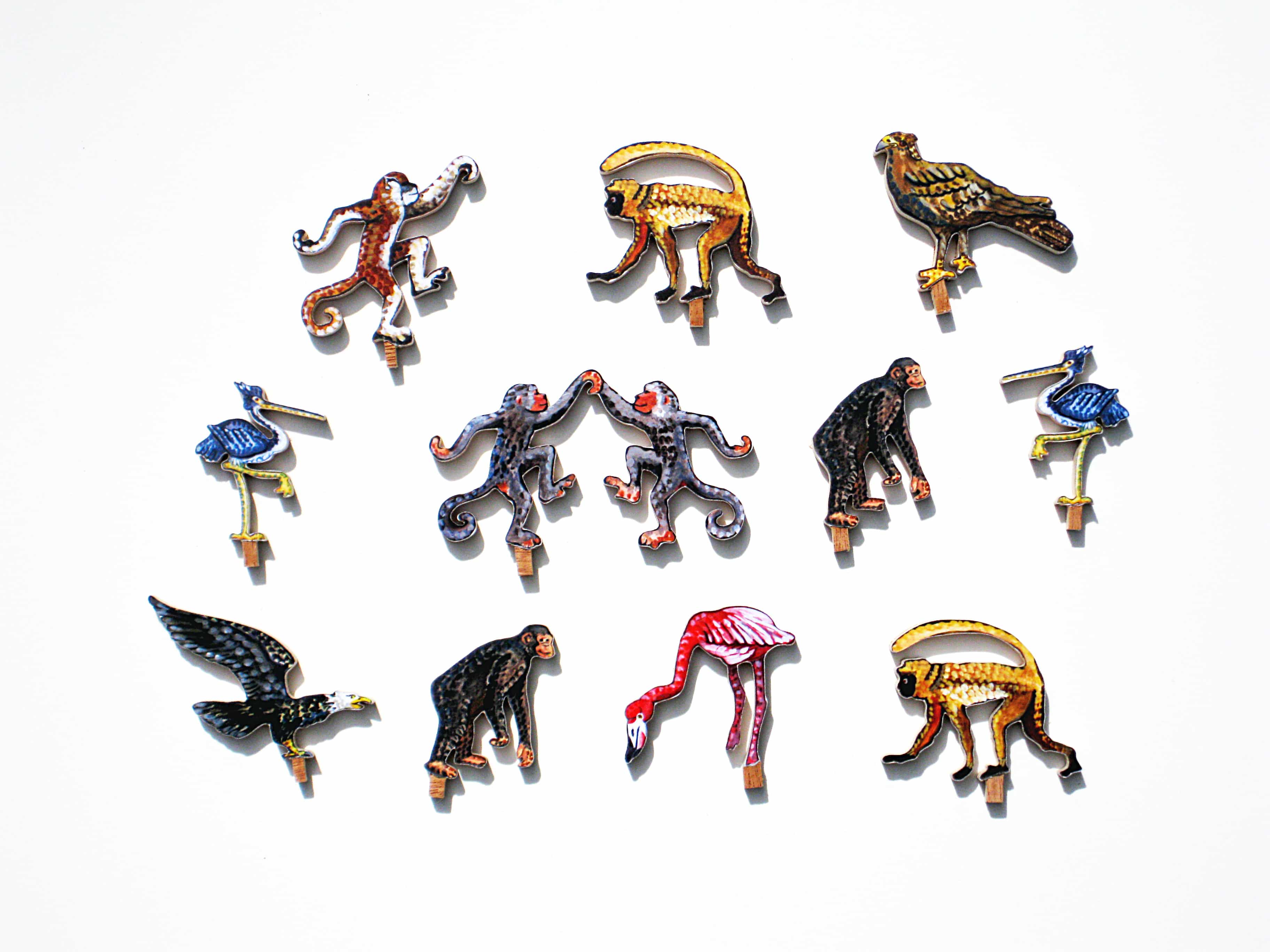 All Bogart’s puzzles include “whimsys” or whimsically shaped pieces that Jay cuts out by hand. Customers can choose which kinds of whimsys to be featured in their custom jigsaw puzzles.

In these past few years, Jay has found increasing levels of success and recognition for his unique and challenging wooden jigsaw puzzles. For example, two years ago, Hollis submitted his portfolio to one of the nation’s most prestigious craft fairs and was accepted on the first attempt. He attended the fair with about 25 unique puzzles and left with only two.

In addition to industry recognition, Jay, through another string of strangely fated events, has Barbara Bush as a regular customer, “I’ve been making puzzles for Barbara and President Bush for the last few years…I knew that she was very very interested in doing wooden jigsaw puzzles and I found out that one of my neighbors knew someone who knew someone who knew [Barabra’s] secret service people who worked out of walker’s point. We made arrangements to get one of my puzzles taken down to where they live…I got a beautiful hand-written note from Mr. Bush thanking me for the puzzle and additionally asking me for information about a website and perhaps she’d order some. Since then, two years later, she’s ordered six puzzles. She’s one of my better customers.” 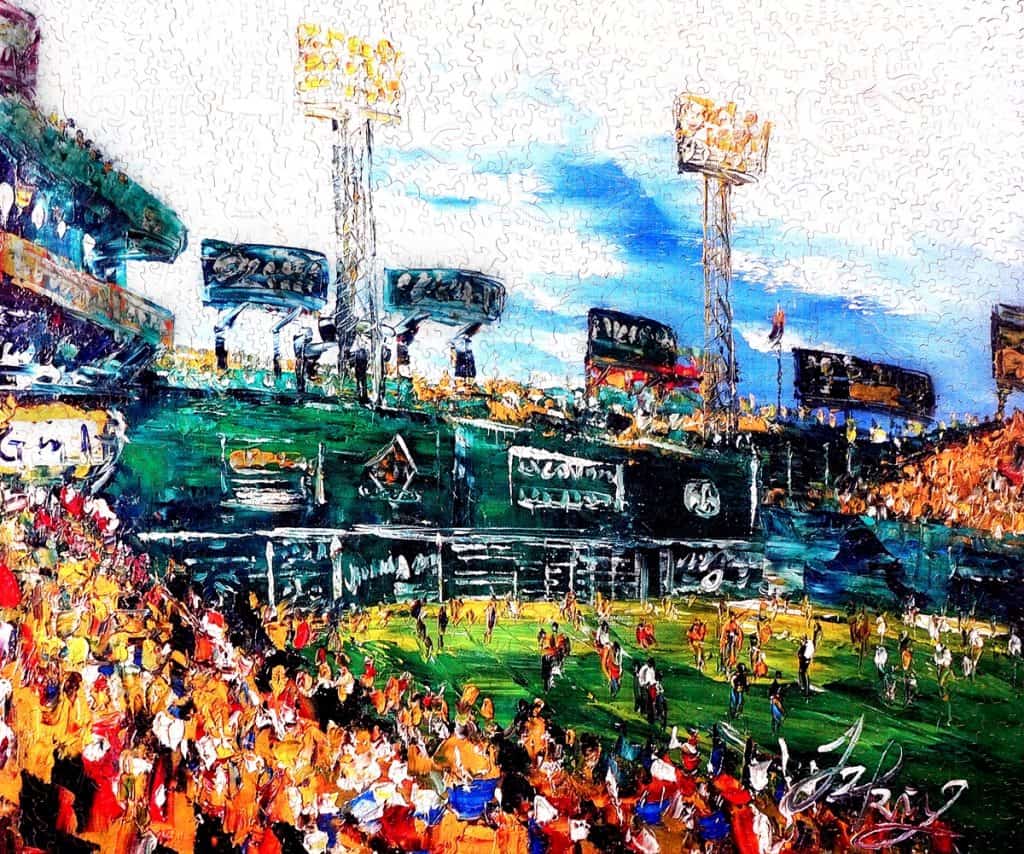 Hollis’s current goal is to wean himself off architectural work and eventually do wooden jigsaw puzzle-making full-time. However, it seems that Jay couldn’t do one without the skillset of the other. His intricate designs, precise cutting and purposefully complex image selections all seem to work towards marrying disjointed pieces to create a realized imagine that was, originally, only accessible in the mind of the artist. 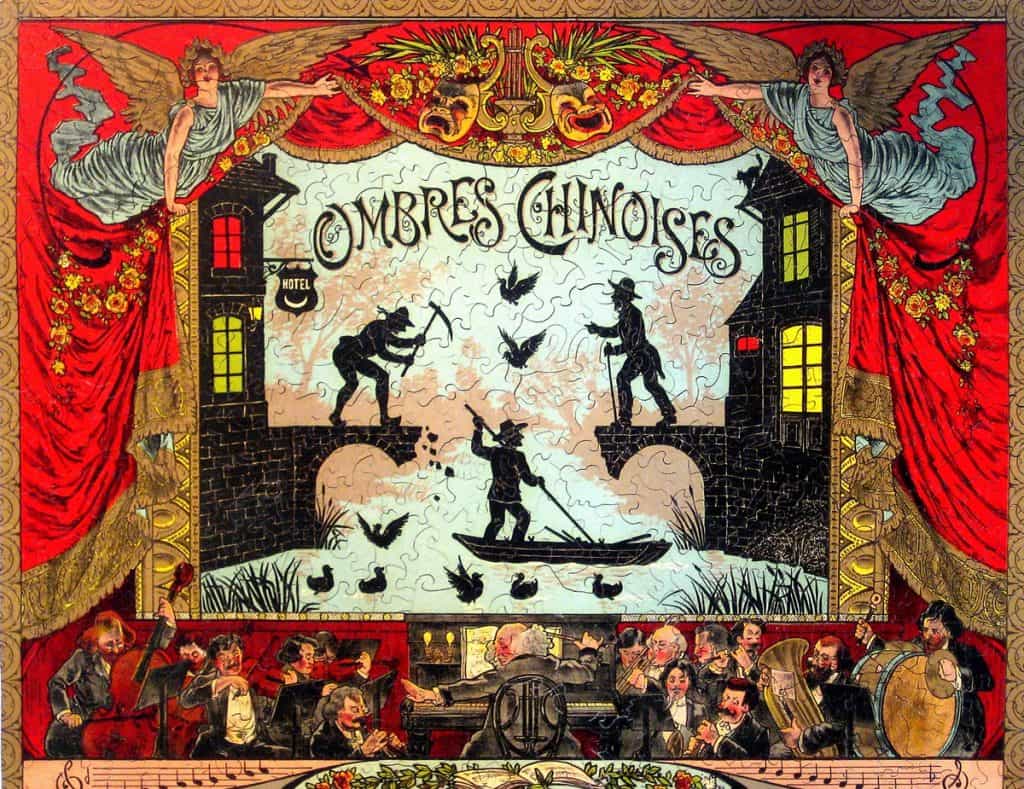 4″ x 16″, 584 pieces “Ombres Chinoises” “One of my favorite puzzles. The image came from an antique German board game cover dating back to the 1800’s. Part of the image was in disrepair, so I had a specialist re-store it back to its original condition.”

Jay Hollis creates custom hand-made wooden jigsaw puzzles by order from his website here. Read more about Jay Hollis at the Bangor Daily News and catch Hollis and his work at the 29th Laudholm Nautre Crafts Festival – one of the largest craft shows in Maine.