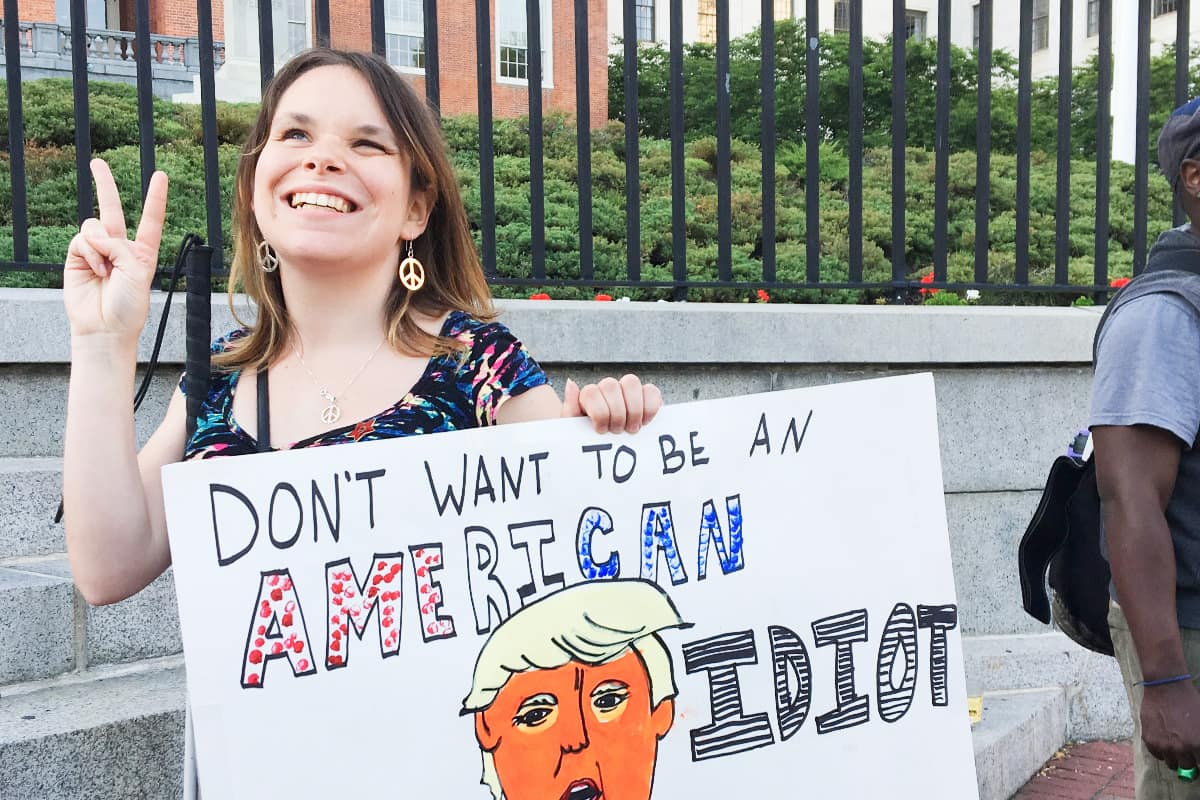 The first annual Boston Artist March, held on June 14, 2017, was disappointing in size but inspiring in content. 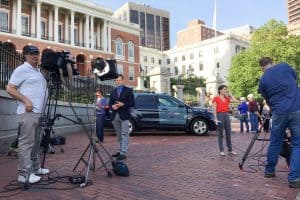 At least three TV news crews were on the scene, along with a police detail, but the expected crowds did not materialize.

Yesterday, a cheerful and determined group of artists gathered to protest the current administration and, hopefully, strengthen Boston’s creative community. Due to a number of possible factors—the mid-week, just-after-work schedule; the unending barrage of news items that feel more pressing than anything related to the arts—the New England edition of the Artist March was sparsely attended. Those who were there, however, were unbowed and not discouraged. Those who weren’t should read the following quotes from attendees. They might inspire you to take action. . .next time. 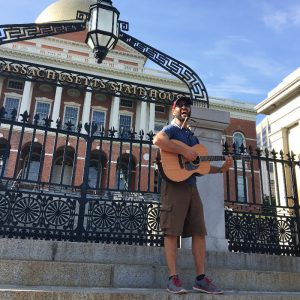 Muhammad, a performer at the Boston Artist March

“As artists, I think we play the role of making resistance fun. Part of the problem is that it’s hard to attract people, especially when people are so busy, have to work so many hours just to make ends meet, it’s hard to get people together for something that feels so serious and depressing. We as artists have so much to offer, in terms of our creativity and inspiration—these are the things that make movements, and the things that will make a successful resistance to the policies we are now seeing from the Trump administration.” —Muhammad Seven, singer/songwriter 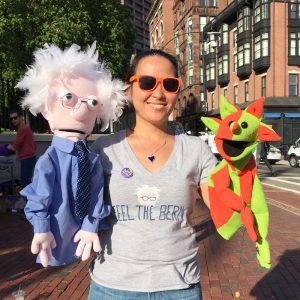 Leigh, a puppeteer/performer at the Boston Artist March

“I’m newly involved in politics, but I have been to more marches and rallies and meetings since November 9th than in my whole life. Making things relevant, but still fun—I think that’s the way to go in terms of getting a mass movement going. A lot of people don’t see themselves as political, but they see themselves as artists, or just people who like to sing and dance and have fun. I don’t see why we can’t have both. Tapping on people’s talents is a way to really build a movement. Everyone’s creative in some way or another, and it helps to bridge differences too. I was hoping there’d be more people, but it is just the first one. Sometimes things take a little bit of time to build. I’m happy the people that are here are here.” —Leigh Baltzer, puppeteer 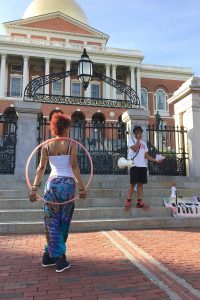 “I was very inspired by artists growing up, particularly Paul Robeson, folks like Lupe Fiasco, Mos Def… During the Algerian Revolution, they said the most dangerous revolutionary was the poet, because the poet was able to distill all these complex ideas about war and colonialism, imperialism, into poetry, so that everyday folks could understand and be armed with their own experiences.” —Nino Brown, speaker 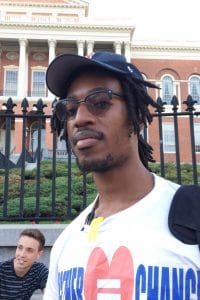 Nino, a speaker at the Boston Artist March

“We’re facing a lot of arts cutbacks. I teach fourth grade at a public school in Mattapan, and public schools are under attack. You see all of this technology going into schools, but they’re taking out all the arts and music and dance, which is actually taking out the humanity, you know? Artists have a role in society, and it’s to not just reflect that society truthfully, but to deconstruct it, and to build a new society. I’ve been to marches of ten people, fifteen. . .so you know, I’m not discouraged. It’s like okay, well, we’ll do better next time. The message is correct; we just have to get it out there.” —Nino Brown, speaker 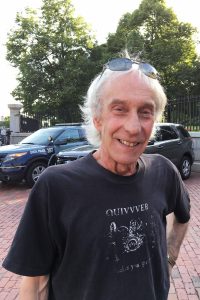 Tom, a speaker at the Boston Artist March

“Artists are some of the first people to be gone after in a totalitarian type of government. [Art] causes people to become aware of what’s going on around them. Sometimes social change can happen very quickly, sometimes it takes a long time. Sometimes it might take forever, but you don’t stop. You keep at it. You keep trying to make that change happen.” —Tom Tipton, speaker and gallery owner 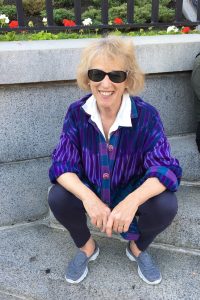 Virginia, a protester at the Boston Artist March

“Well, I’m an artist, and I believe what I’ve been reading, that artists are among the first to be repressed when repression comes. I just saw a very moving piece at the ART in Cambridge, Arrabal, a tango ballet about the dirty war in Argentina. I lived in Argentina ten years before the dirty war, and it was the most democratic, progressive, highly educated, liberal place. If you had told me they would be dropping my classmates out of helicopters into the river ten years later, I never would have believed it. As an artist, I feel it is important that we organize and stand up because as [the other speakers] said, artists are about making change, and are about being on the forefront of social change, and therefore we are more subject to repression. So we need to get more organized.” —Virginia Zanger, protester 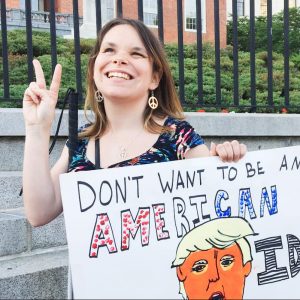 “I’m an activist, so I’m so busy—I do a lot of work. Like Nino, I’m involved with PSL, the Party for Socialism and Liberation, a socialist party here in the city. I do a lot of work with COMBAT [Coalition to Organize and Mobilize Boston Against Trump] too.” —Kristin Turgeon, protest singer and chant leader 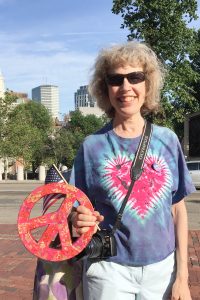 Betsy, a protester at the Boston Artist March

“I’m a craft store owner, and I support 140 local artists. I think that’s the best answer to the question [of why I’m here]. I had three choices tonight: I could go to a party, get free food and beer; I could go hear live music; or I could come here, where, who knows what could happen! And I watched Wonder Woman last night, and so I said, I gotta do what my conscience says, and that’s why I chose to come here.” —Betsy, protester 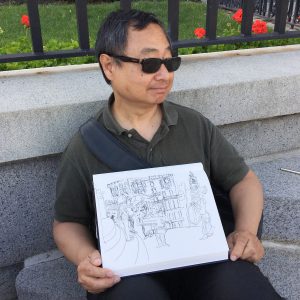 Dan, a protester and documentarian of the Boston Artist March

“I’m an artist, and I’ve been sketching all the protests I can get to. It’s my way of dealing with the current political climate.” —Dan Jay, protester 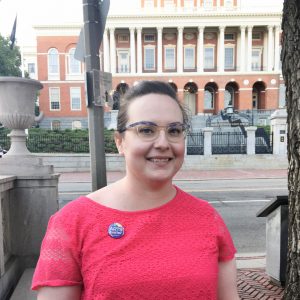 “I’m a cofounder of Massachusetts Artists for Change. We’ve had a few fundraisers and art shows. We raised over $1,200 for the Boston Center for Refugee Health and Human Rights; we had an art show based on the Women’s March protest, with posters and photos; and we had an event for International Women’s Day in which we had poetry and collaborative art. This march happened because I stumbled upon a Facebook post where they were looking for people to organize Artist Marches across the country. This wasn’t the only march tonight—there was a march in Miami, Mar-a-Lago, Fort Lauderdale, San Francisco, New York City, and Wichita. So I saw that and said, Ooh, I’d like to try to organize that, that seems like something I could do.”—Harmony Witte, event organizer 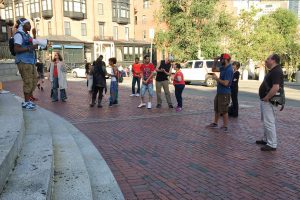 The small but sincere crowd at the Boston Artist March

“Yeah, I’m a little disappointed in the turnout. It seemed on Facebook that more people would be coming. . .but you never know, it’s so hard to tell. I’m still kind of new to Boston and to the organizing scene, so I don’t have the connections that would have come in handy. But, first time for everything. I think it’s just that people don’t want to get off work and go to a march. If it were up to me, I would’ve had it on a Saturday. I’m probably going to take a little break [from organizing], because I put a lot into this. But I’d like to keep organizing, for sure. It seemed like people were having a good time.” —Harmony Witte, event organizer 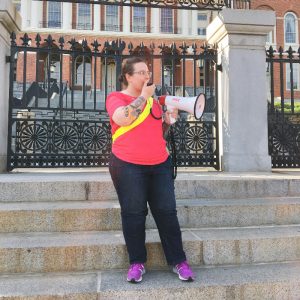 “It’s so easy [as artists] to turn inward and focus only on yourself all the time. It’s important to focus on the world around us. Arts funding is potentially going to be cut; there’s so many things that artists SHOULD be banding together to fight for. So if you can get them out of their houses and focus on something, that’s really good!” —Harmony Witte, event organizer