In a carpenter’s workshop at Portsmouth’s Strawbery Banke Museum, the Leftist Marching Band is smoothing out the rough edges of its Halloween night set list. More than a dozen band members are here on a cold Monday night, crowded around table saws and piles of wood, working out the kinks in the songs they’ll perform at the Portsmouth Halloween Parade the following week — “Sweet Dreams (Are Made of This),” “Evil Ways,” and “When the Saints Go Marching In.”

After a song wraps up, someone asks band leader Elizabeth Wolff about the tempo on “Saints.” “We’ll have to play that part by ear,” she says. And without pause, someone quips, “We play it all by ear!”

The raucous, rag-tag street band is now in its 13th year, and it’s perhaps the busiest one yet. Though the Leftist Marching Band (LMB) has long been a staple at public events throughout the New Hampshire Seacoast, Wolff says 2017 has seen an “above average number of gigs” for the band, especially following the inauguration of a certain social media-obsessed president in January. One of the crowning moments? The Portsmouth edition of the national Women’s March on Jan. 21st, where the LMB played for some 3,500 demonstrators in the middle of Market Square. 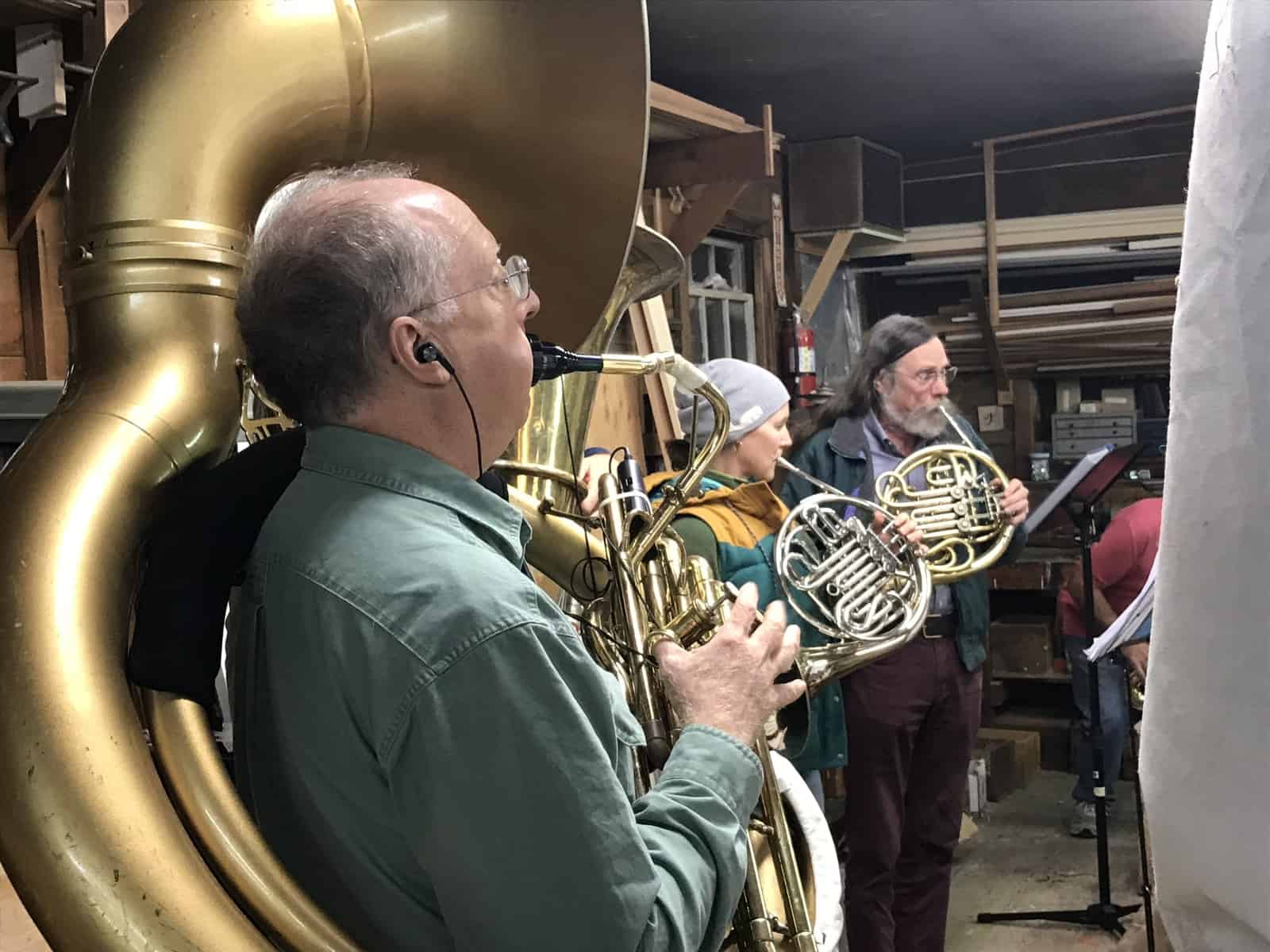 “You can feel the collective response of the people around you,” says Wolff, who plays the trombone. “Having 3,500 people show up in Market Square would’ve been awesome anyway, but having the LMB in the middle of it and feeling that collective energy focus and move to a collective rhythm was so powerful.”

Not bad for a band that started in 2004 as a temporary project. Wolff is one of the band’s early members. With the second half of the George W. Bush administration in the offing and the war in Iraq dividing the country, the idea behind the LMB was to inject some energy and fun into the progressive causes. Made up mostly of former high school marching band members, it was a loose, “musically unpracticed” group, Wolff says.

But they tapped into a broader movement. “We didn’t know street bands were a thing,” Wolff says. “The Iraq War really spurred a bunch of street bands, and we were part of that without knowing it.” And while you’ll find the LMB most often in Portsmouth and surrounding locales, you can also see them each year at Somerville’s Honk! Festival, standing alongside other street bands.

Pat Spalding, the band’s majorette, and Wolff are the band’s most visible faces — Wolff at the font of the band, marching, shouting, and waving her trombone in sweeping arcs, usually while barefoot, and Spalding, dancing, twirling, and spinning a baton, usually while wearing a colorful dress. 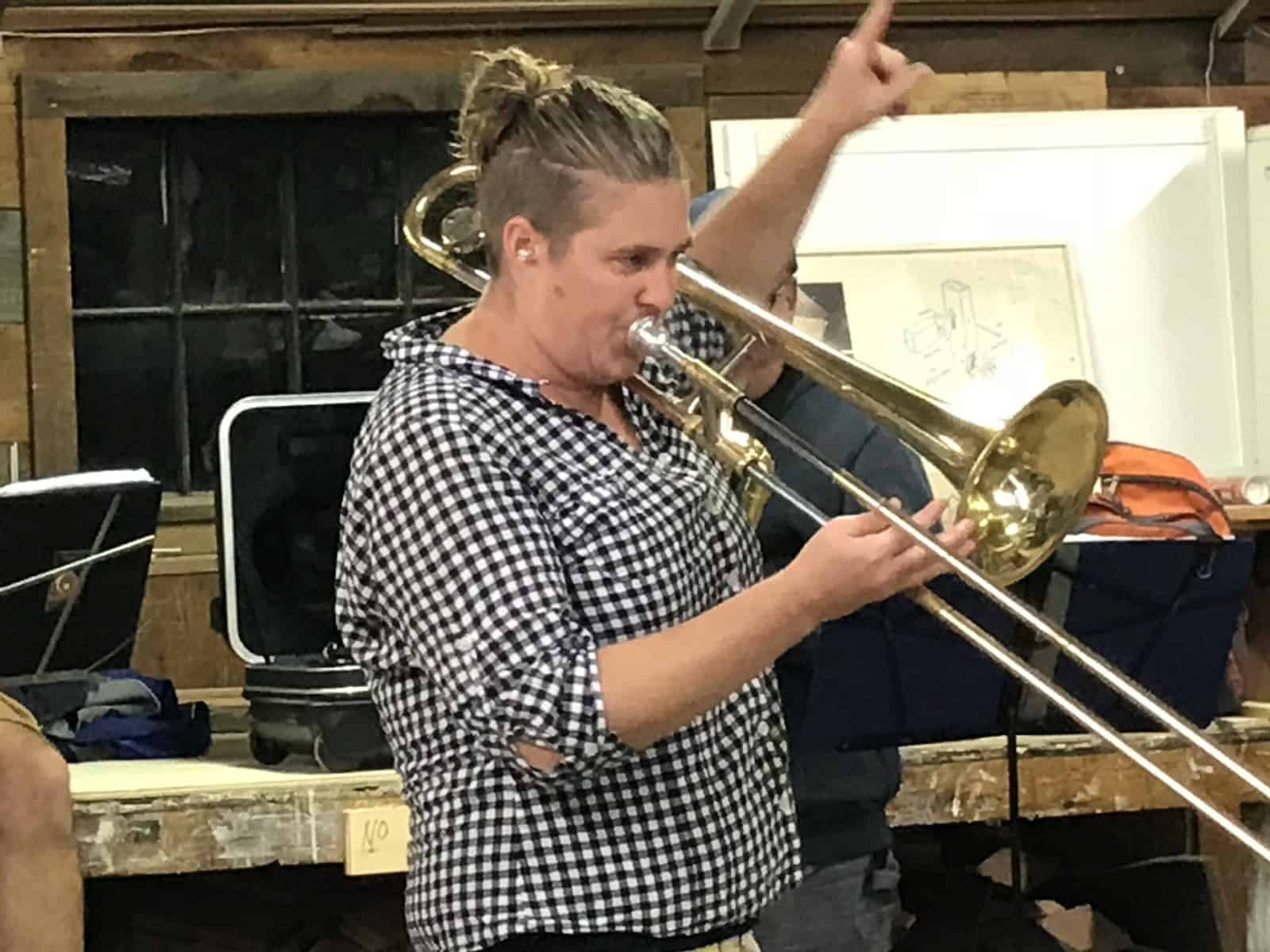 As the LMB marches into the future, Wolff hopes the band takes more direct action in drawing attention to important local and national causes. The band had a rare victory this year when a New Hampshire court restored access to Sanders Poynt in Rye. The public access point to the beach, Sanders Poynt was closed to the public in 2012 by the nearby Wentworth by the Sea country club. While locals fought the closure in courts, the LMB kept the issue in the spotlight, playing gigs on the beach and raising awareness about the fight.

“What our impact on the outcome was, I doubt it’s a measureable thing. But we had something concrete that we did and the role of the band was really clear, and I’d like to see us do more things like that,” Wolff says.

That spirit of hope is what keeps the band going. “It’s happiness,” Spalding explains. “The music gives you hope, that idea of making joyful noise. That we’re in this together and we’re going to make change.”

All photos by Larry Clow. The video is by Suzanne Laurent. 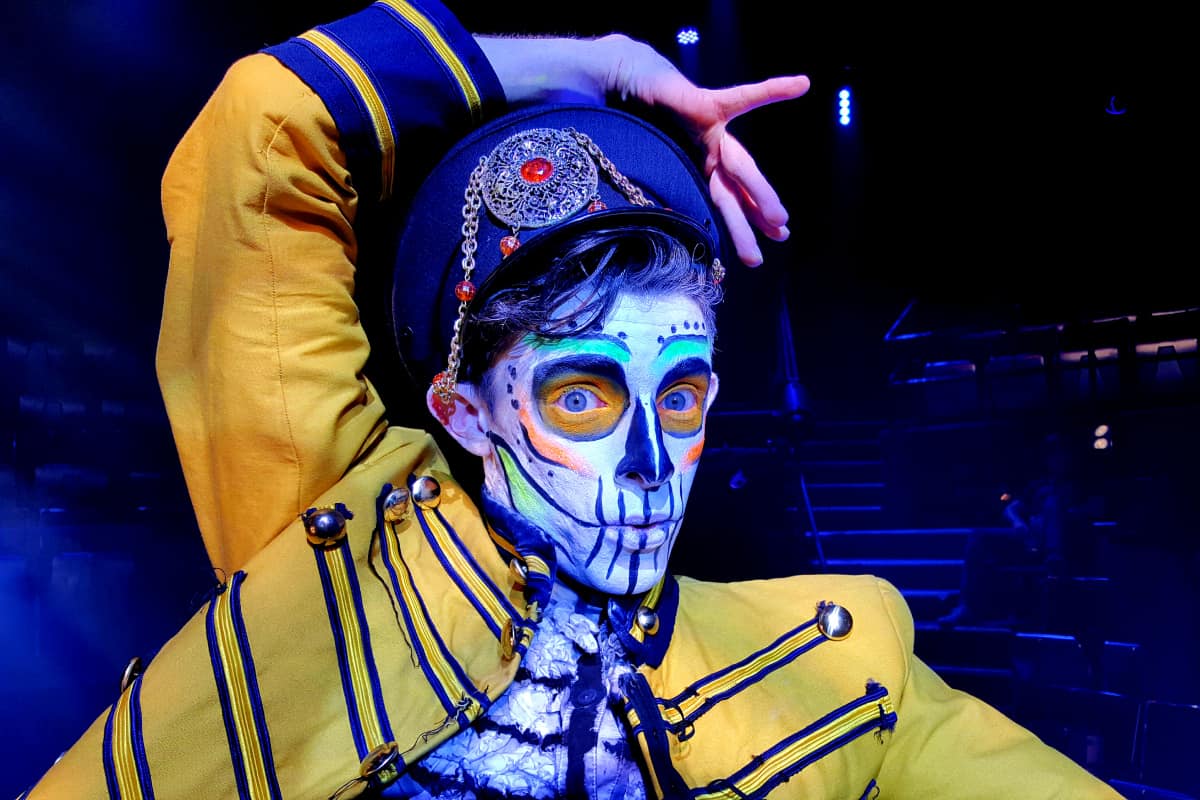 Keeping it Weird in Portsmouth