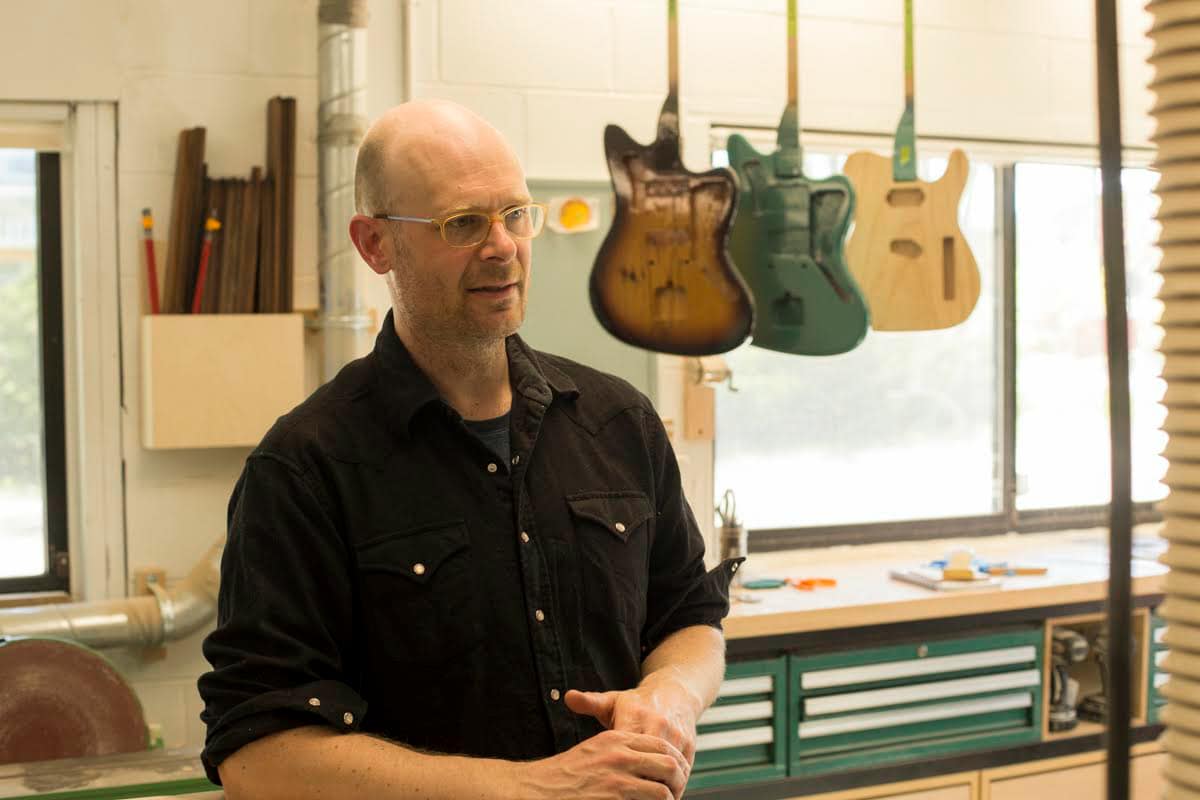 Punk rockers and country crooners around the world are clamoring for Creston Lea’s Vermont-made Creston guitars.

Creston Lea recently was enjoying a Son Volt concert in New York City after playing for Anders Parker, who opened for the headliner, when he noticed that every musician on stage except the drummer was using a guitar Lea made.

“It’s really fun for me to stand in the audience and hear music I like played by people I like on one of my instruments,” Lea says modestly.

In the 14 years since Creston Electric Instruments sold its first guitar, Lea has developed a cult-like following among strummers of all stripes. The Vermont luthier models his six-string electrics mostly in the post-war Fender style and strives to balance the look, feel and sound of the instrument. “I don’t think I have any superpowers in that regard,” Lea says. “I just really love guitars.”

Lea, a New Hampshire native, moved to Burlington in the mid-’90s and worked on rehab of old houses, eventually doing carpentry and cabinetry. In 2003, he opened a workshop to build cabinets, many for speakers and amplifiers, but started crafting guitars in his garage. 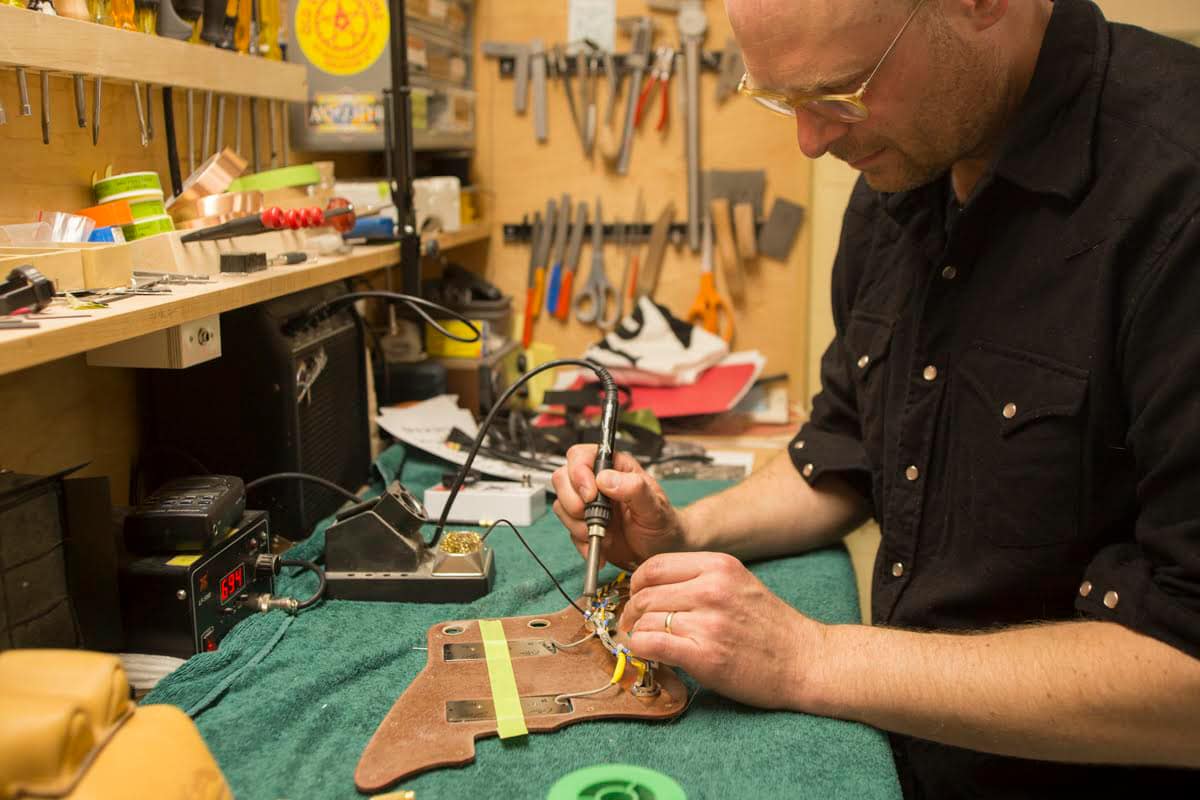 Playing in various bands over the years, he often considered what made one guitar sound or strum better than another. One day, he took out a measuring tape. “I just became totally consumed with every aspect of the guitar,” he says. “I really couldn’t turn my brain off of it.”

He would love a guitar’s tone but maybe wish for a fatter neck. Or he’d like the feel of the instrument in his hands but prefer it sounded a bit brighter. Most guitars, even the best, come off an assembly line. Lea saw the need to customize.

A musician friend had a guitar he wanted to refit with different electronics. That was Lea’s first foray into construction, and it was a success, he says.

That friend—guitarist Mark Spencer, a one-time member of Burlington punk rockers Pinhead and Americana outfit Blood Oranges—showed Lea’s work to fellow players, who started calling for their own Crestons. “His endorsement was enough,” Lea says of Spencer.

Lea has since outfitted Grammy winner Ray LaMontagne; new-wave singer Adam Ant; Ian MacKaye of punk band Fugazi; and Eric Heywood, who has played with The Pretenders and Son Volt. Jay Farrar, front man of Son Volt and formerly Uncle Tupelo, is a Creston fan. So is M.C. Taylor of Hiss Golden Messenger, whose band members also own Crestons.

Every instrument is tailored to a client’s specifications, down to the 1,000ths of an inch and the amount of lacquer. (Some players are remarkably particular.) Crestons typically have 12 coats.

A certain kind of wood generally produces a certain tone—though not always, Lea says. Most Crestons are ash, alder, or mahogany, but his specialty is sugar pine, which he salvaged for a cabinetry job in his early days and found to make a nice-sounding guitar. 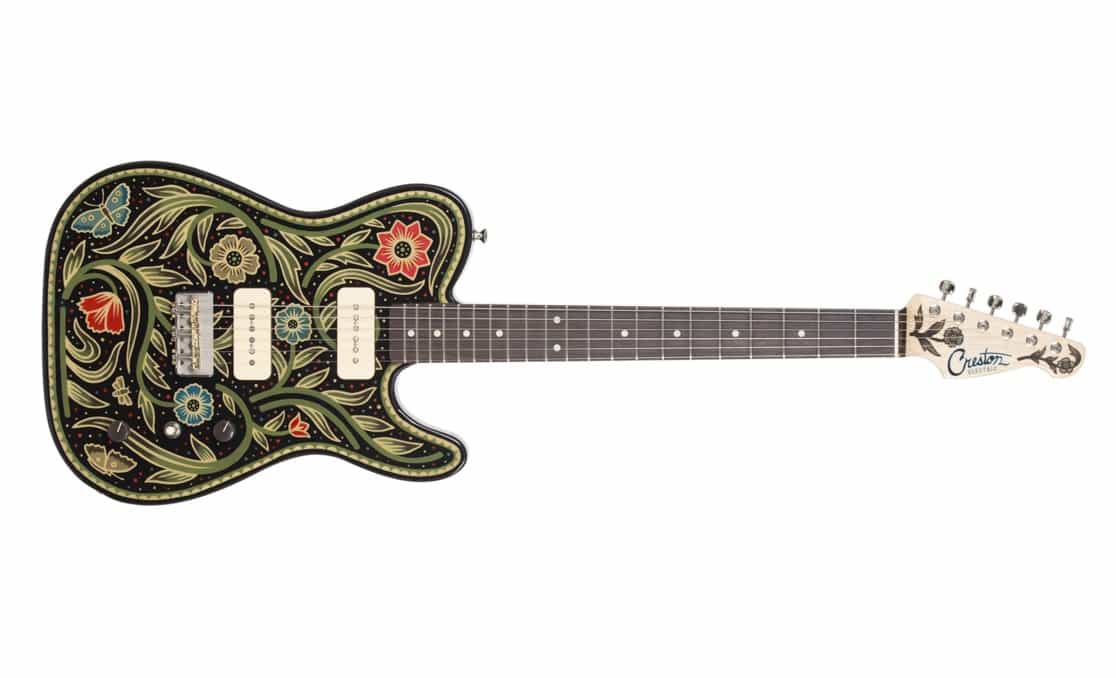 Vermont artist Sarah Ryan has painted ornate body designs for some Creston buyers. Lea also has made bass guitars, baritones, mandolins, a lap-steel guitar, and a bouzouki (a long-necked mandolin).

In 2014, Creston Electric expanded into an old garage with more space. Above a work bench, guitars hang in various stages of painting, polishing, or curing, which takes several weeks. Lea completes about 60 guitars a year, with a wait time of at least two months.