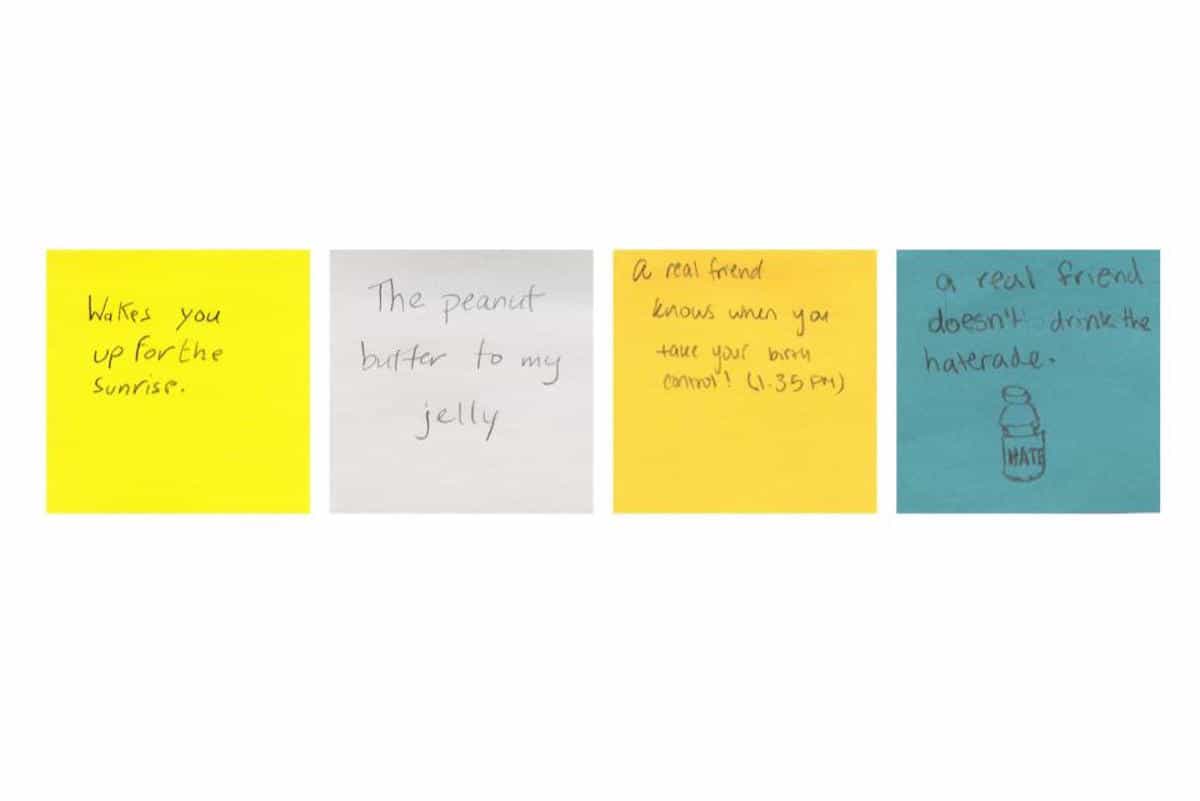 Artist Tanja Hollander’s exhibit at Mass MoCA examines the nature of friendship in our new world of social media.

Ascending the stairs to the second floor of the Massachusetts Museum of Contemporary Art in North Adams, Massachusetts, I see Tanja Hollander on her phone, head tilted in that familiar position while bathed in the glittering light from Nick Cave’s nearby installation Until. I’m accompanied by curator Denise Markonish, one of Hollander’s IRL friends. We arrive at a table in front of one of her self-portraits; Hollander is still on the phone. I’m not offended or annoyed. In fact, as a digital native who’s lived much of my social life through a cell phone for almost eight years, I feel quite content. I’ve always believed that friends should be able to silently sit together while on their personal smart devices without it being an issue.

In her exhibit Are you really my friend?, which opens at Mass MoCA on February 18th, it’s not this feeling of momentary kinship that Hollander seeks to unpack so much as the idea of true friendship—and how that’s changing in our digital age. The show features formal portraits of Hollander’s Facebook friends taken in their homes, the Maine artist traveling across the United States and Europe for nearly six years to capture as many of her 626 friends as she could. Adjacent to several of the resulting 430 portraits, Hollander also shows thoughtfully arranged and curated bits of ephemera from those travels: everything from a flattened Plan B box to personal notes left for her.

“In the same way that a beautifully staged and composed portrait is relevant,” adds Markonish, who points to an iPhone photo of a landscape shot through curtains.“They’re all relevant and all democratized, where each thing is as important as the next. I’ve done a lot of big shows here, but I think this show involves the most amount of information.”

Markonish’s comment is not an overstatement: Are you really my friend? Features 5,701 images (edited down from over 100,000) displayed on the walls, assembled over giant curtain banners, and framed in quiet concrete corners. It’s the first time that all of Hollander’s Facebook-friend portraits are being shown in one place.

Clip from Are you really my friend? The Movie | Directed by Robin Greenspun.

Hollander’s approach to dissecting and understanding friendship, the data we compile about ourselves over time and travel, is surprising and extremely contemporary. The scanned familiar objects from her travels link to a specific time, location, and, finally, to a Facebook friend portrait shared via a data visualization platform that will be available online and at the show. While the ephemera and notes don’t literally relate to each other, they act as markers of time and place throughout Hollander’s journey. A discarded package of European cigarettes links to a post-it note left for Hollander, which links to one of the 30 large portraits installed at the beginning of the exhibition space. “Everything cross-references everything else,” she explains.

We stroll into a partially walled-off portion of the exhibit, where most of the large portraits hang. For Hollander, it was very important to go to a person, share a meal, and sometimes even stay at their house. This emotional labor and caring connection is present in the portraits, which seems a bit ironic considering so much of social media, particularly Facebook, is about voyeurism and establishing a comfortable distance from certain people. Markonish comments on one of the portraits, a family seated upright in a clean, sunny kitchen. “They’re not uncomfortable, like a stranger is capturing them,” she says. “When I look at this portrait, I don’t feel like I’m spying on them; it feels very authentic.”

“All of these people welcomed you into their homes,” Markonish says to Hollander, “and for so many of them, it wasn’t just ‘come in here, take a picture of me and leave,’ it was ‘share a meal with us, have our guest room.’ It became about welcome and hospitality.” The room of portraits features a wide variety of people in equally varied circumstances. I find myself drawn to a mother and daughter, heads tipped toward each other, sitting in a lovingly disorganized, cluttered kitchen that reminds me of home. The portrait hangs across from another featuring stylish furniture in a large living room, with an abstract painter-turned-meticulous-bird-illustrator sitting perfectly upright, almost regal, her chin up, cheek turned toward the viewer.

I ask Hollander and Markonish why, of all of the 626 friends exhibited, they decided to feature these 30 larger than the rest. “It was really based on image quality,” says Hollander, “while also keeping in mind class, race, age, gay, single parent, single person as opposed to just couples and families. Just trying to get the whole range of what is here, and highlight some of them [by making them] big. Both Denise and I were pretty conscious of not exclusively featuring white, middle-class arty people.”

Exiting the portrait room, I’m reminded again of how hard it is to avoid peering into the Nick Cave show adjacent to Hollander’s exhibit. “I will not lie, being next to Nick is incredibly intimidating,” Hollander admits. “Maybe I’m not as far away from Nick’s work as I think: he is overwhelming with bedazzle, and I’m doing it with the mundane, the every day. I’m saying, Look, you have these things, I have these things, we are all relevant. That’s what social media does. It’s the greatest historical archive of all time, written and visualized by the people for the people—not the aristocracy, who are usually the history writers and cultural influencers.”

Cautiously trying to avoid a Full House moment, I don’t ask Markonish and Hollander what they each have learned about friendship during the process of traveling, gathering information, and curating the show. But as I leave, Hollander, in her straightforward yet highly endearing way, offers one up herself. “One of the most important things that I learned is that I have a really close, tight group of friends that are my family,” she says. “They don’t all live in Maine; they live all across the world.”