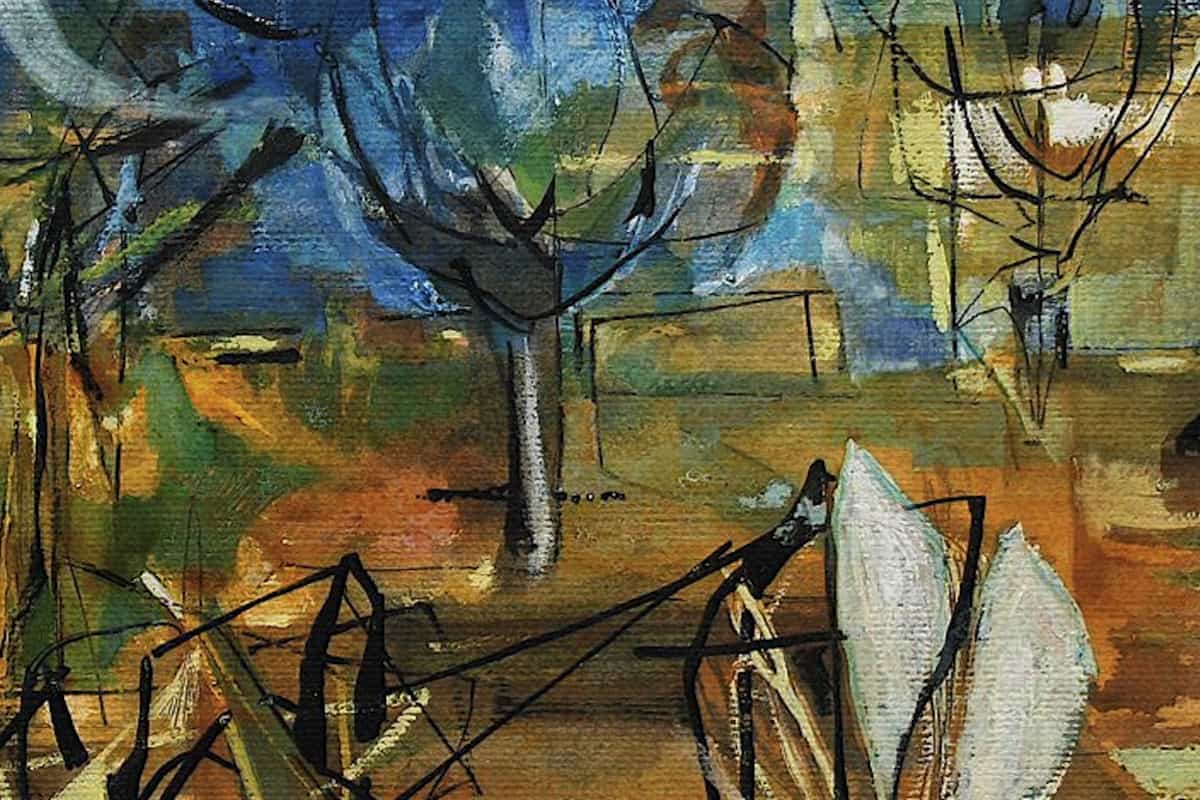 Think of Marc Chabot’s collection of works on paper as heirlooms presented on Antiques Roadshow. A first glance suggests talented artists and not insignificant value, but the true status of the works — museum-quality treasures — only becomes apparent when a skilled appraiser details their attributes and origin stories. 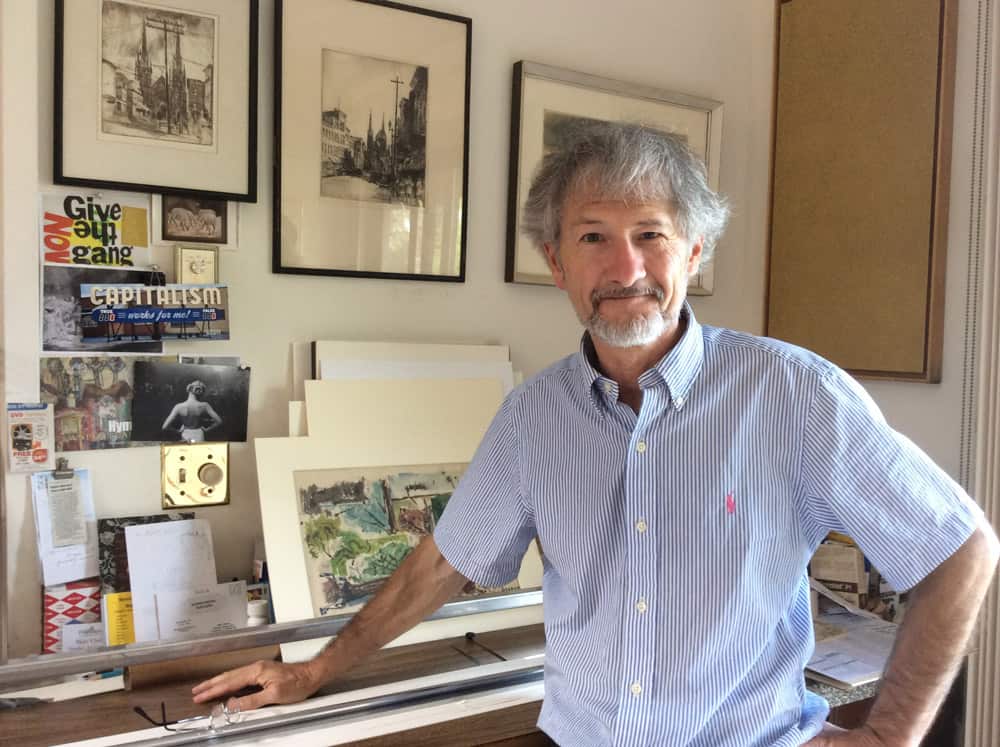 Chabot, an artist who teaches at Weir Farm National Historic Site in Wilton, Connecticut, is both the proud collector of nearly 500 works and the art dealer who eloquently assesses their importance.

He exhibits at Papermania at the XL Center in Hartford and at the Boston Print Fair, and meets with clients of Marc Chabot Fine Arts at his home/gallery in Southbury. Most transactions funnel through his website.

Barrer studied with Will Barnet and was one of the Indian Space Painters, who came to prominence in the late 1940s and ‘50s when Abstract Expressionism reigned. Saturated with color, Barrer’s work embodies movement and strong narrative qualities. “As she embraced, personalized, then transcended Indian Space concerns for all-over patterning and ambiguity between positive and negative form, Barrer infused her own hybrid imagery with elements of both organic and manmade structure, and monumental and mythic themes,” Chabot writes on his website.

Clapp & Tuttle in Woodbury, a gallery and framing shop, is showing late works by Barrer through Oct. 31. These religious-themed pieces feature early Christian and Renaissance archetypes. “They’re sort of Byzantine,” says Chabot, who is giving a talk at the opening reception, from 4 to 7 p.m. Oct. 17. 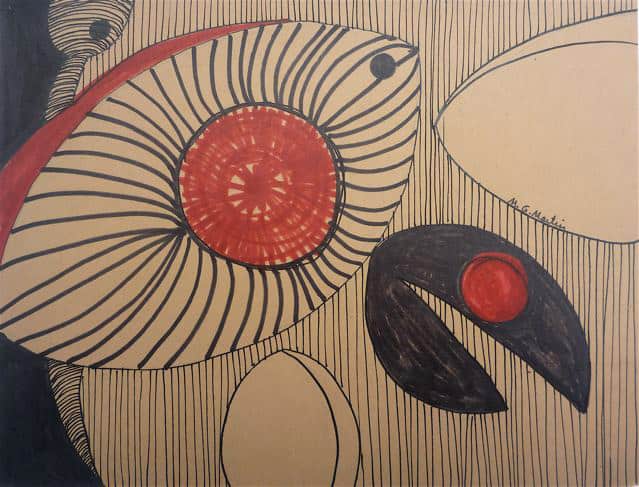 Van Vleck cut an androgynous figure in Woodbury. Chabot remembers seeing her in the mid-1960s “dressed like a man” and “driving an old jalopy around town.” By that time, three decades had intervened since she essentially stopped painting; she had immersed herself in raising turkeys and sheep and become a pioneering environmentalist.

Van Vleck founded Flanders Nature Center & Land Trust in 1963, and Flanders preserves her legacy as a “one of the very few cutting-edge women artists who worked in a progressive style.”

She had passed over Bryn Mawr College to study full-time at the Art Students League under Ashcan School legend Robert Henri and Max Weber, who proved more of an influence in her embrace of Cubism.

In the early 1930s in Woodbury, Van Vleck’s painting, the Flanders website notes, changed “to a regionalist, precisionist style with hard-edged forms and rounded volumes, evoking a machine-age esthetic.” 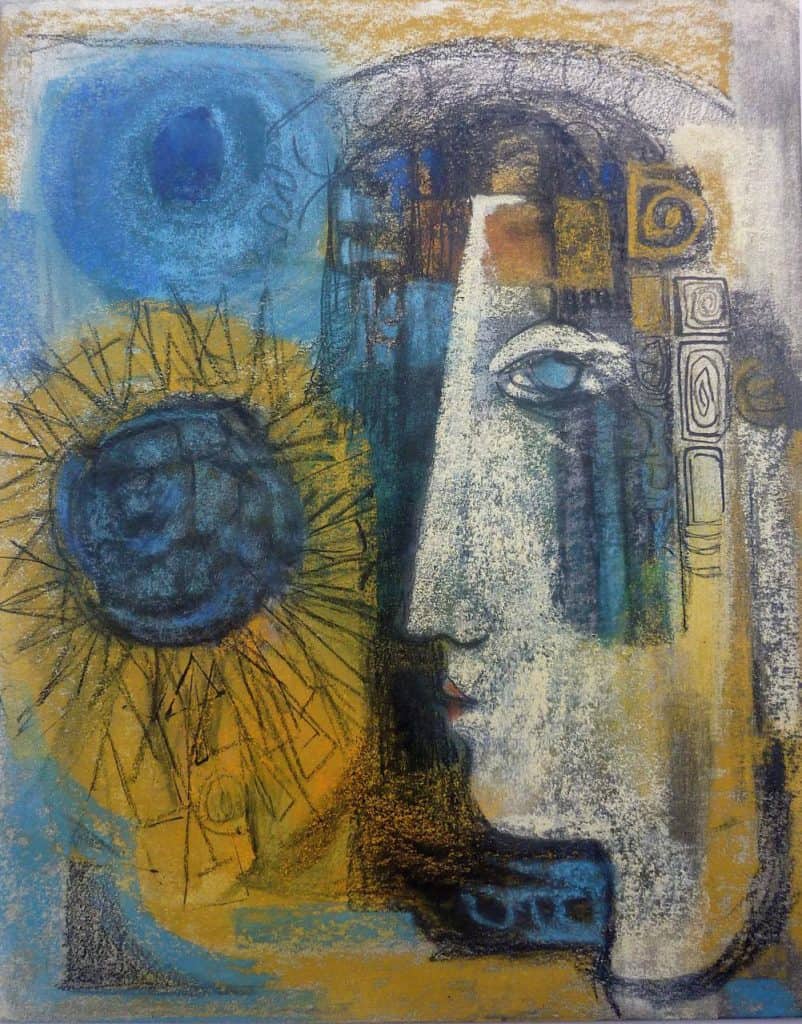 “There’s always a selection of her work hanging at Flanders. We have an incredible collection,” says Chabot, its curator. “People can request an appointment to see the work.”

While Chabot doesn’t have talks on Trudy Martin scheduled, he has hundreds of works from her estate for interested collectors. Martin, who studied at the Art Students League, translated her signature organic abstract forms across a variety of media, including prints, ceramics, textiles, and tiles. She chaired the art department at Westover School, where she exhibited Judy Chicago’s “The Dinner Party,” the “epic feminist artwork” offering a symbolic history of women in the Western world.