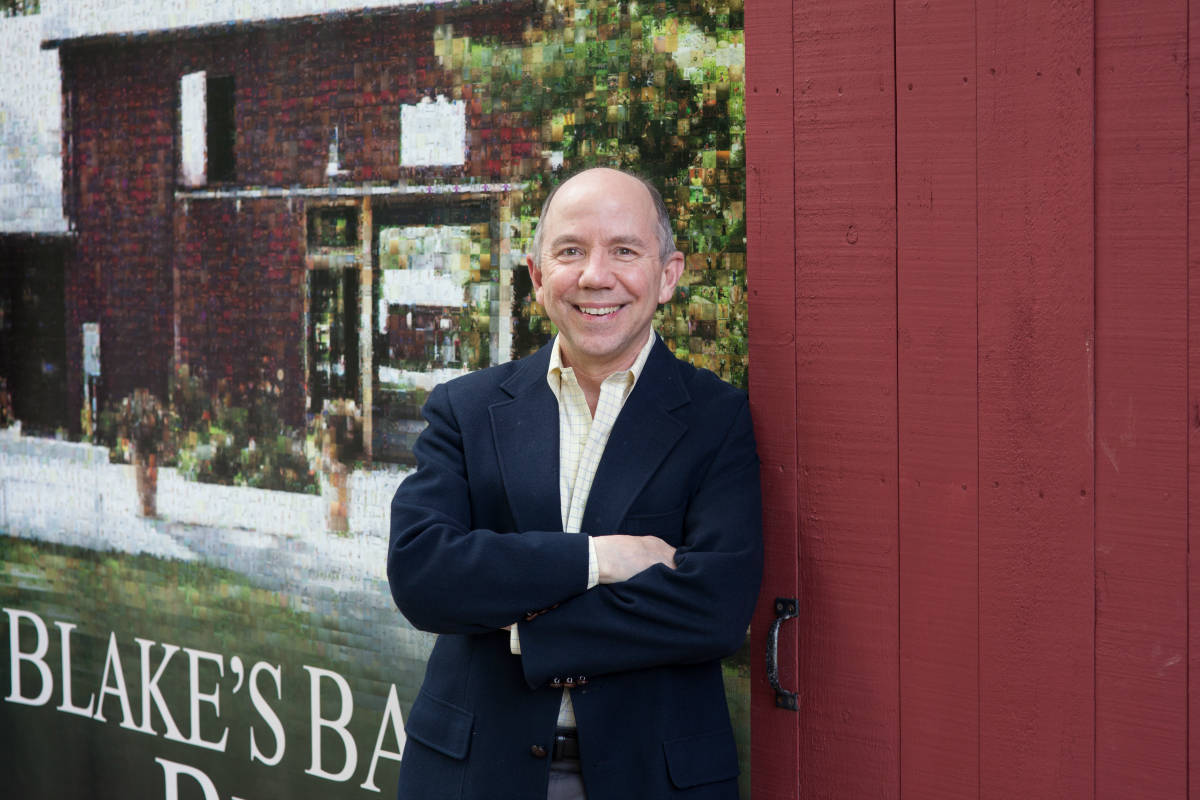 If a poster in the rest room is what it takes to turn someone on to dance, that’s fine with Norton Owen. He’s the Director of Preservation at Jacob’s Pillow Dance Festival, which sits on 220 leafy acres in Becket, Massachusetts. The Pillow, as it’s called, is America’s longest-running international dance festival.

It is Owen’s hope that all visitors will get excited about dance and share their enthusiasm with friends the way people share their enthusiasm about favorite movies. “If we want to communicate the magic of Jacob’s Pillow, then anybody and everybody who comes, regardless of whether they know anything at all about dance, I want them to get it, to understand and catch the vibe,” Owen says. “You can’t do that unless you have some appreciation that this is a place that’s been doing this a long time.”

Buoyant, enthusiastic, and deeply knowledgeable, Owen was born in a small town in Alabama, where dance not exactly appreciated. When he came to the Pillow in 1976 as a student. “It was Utopia!” he says. It turned out it was also his destiny.

The class rehearsal pianist was Jess Meeker, who had been with founder Ted Shawn from the beginning as his composer and music director. Owen kept asking questions. Then, when a series of administrative positions landed Owen in the press office, he found himself looking up information for journalists, and one thing led to another.

Owen became the director of preservation in 1990, but he’d rather be called “Director of Connections.” He’s in charge of exhibits, audience engagement, and archives. He also coordinates PillowTalks, which include pre-show lectures and post-performance discussions.

Owen works out of Blake’s Barn, which was donated by the Hollywood dancer Marge Champion, who, with her late husband Gower, appeared in MGM musicals and on early television variety shows in the 1950s. The barn is named in honor of her late son. In 2014, when she turned 95, an exhibit was mounted there in her honor.

Blake’s Barn has an exhibit/ lecture space, the Norton Owen Reading Room, and a temperature-controlled storage area. “The building has evolved as extension of what I want to share with people and how happy I am to make this a part of everybody’s Jacob’s Pillow experience,” Owen says. “I don’t expect everyone to be a dance history buff or even interested, but to me it’s central to what Jacob’s Pillow is. It’s not just about what’s happening on the stages today, even though that’s tremendously exciting. I feel so strongly that the essence or the Pillow is the synergy of what’s happening today along with what has transpired over the last 84 years.”

Exhibits are as eclectic as the international performing groups that have been part of the Pillow’s history since the beginning. Shows can take advantage of 80 years of archives, as well as borrowed works by the likes of Jules Feiffer and Al Hirschfeld. One show featured movie musical posters. With a smile, Owen recalls installing an exhibit of dance photographs by Annie Leibovitz, who was in California at the time, while her assistant was in the gallery sending pictures from her phone so Leibovitz could tweak the placement and angle of each image. 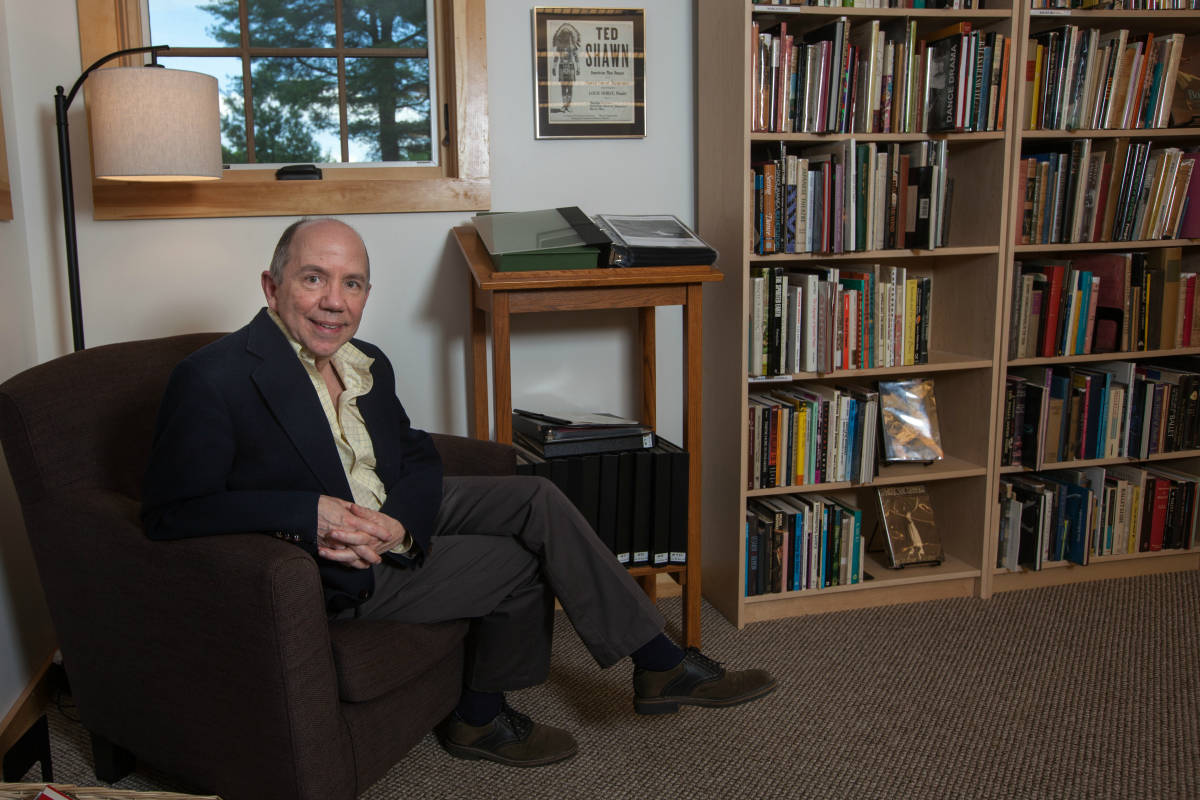 Next to the gallery is the Norton Owen Reading Room. “Anyone who wanders into here really is able to get the full range of what we have been over the years to whatever level meets their needs,” says Owen. “One of the things I love about how we’re about to meet those needs is that there are a lot of things out for people to browse through.”

Owen works at a stand-up desk in the corner. “I watch carefully what people look at how they react. We want to give them a wonderful experience.”

There are striking posters on the walls, dance memorabilia in display cases, and some 2,500 books. “This sends an important message to people who see only a few books on dance at a bookstore, which gives a different message,” says Owen. The Reading Room “communicates to people that dance is a serious subject that you can get at in a lot of different ways. For many people that might just be a visual—they won’t engage with books—but other people will go deeper. What I love about what we build here is that whatever level people do choose to engage we have the stuff.”

The room is ringed with monitors streaming videos. Before 1996, in a smaller space, there were only one or two monitors available in case people wanted to see something. “But people were reluctant to ask,” says Owen. “Now whenever we’re open all these screens have something playing on them. It draws them in. We select carefully. It usually has to do with whatever’s going on in the theaters.”

Downstairs is the climate-controlled storage area. When Owen first came to the Pillow, all the photographs, programs, books, and costumes were housed in a small, nasty room with no climate control. The archives hold approximately 6,000 films and videos from 1894 to present, 45,000 historic dance photos and negatives, 313,000 pages of unique printed materials, 27 trunks of costumes dating from 1915.

The area is not open to the public, but visitors do come, so Owen has staged the contents with presentation in mind. For instance, a feathered headdress is displayed next to a picture of Ted Shawn wearing the same piece. A pair of shorts worn by one of the Ted Shawn Men Dancers sits next to an image of a line of dancers wearing the same garb.

Historic photos grace the walls. Stacks of funky vaudeville-era theater trunks are tucked together. Lined up on one long wall are shelves of videotapes, films in metal cans, and CDs. The earliest item is a small mailing box of film, labeled 1918, addressed to Ted Shawn. All the movies are being digitized. Surprisingly, the old film holds up well. It’s the videotapes that are most fragile, Owen says.

Those digitized videos are being uploaded to Jacob’s Pillow Dance Interactive website, which was launched in 2011. It features an ever-growing collection of dance videos filmed at Jacob’s Pillow from the 1930s to today, which brings those connections Owen encourages to the whole world.

The videos are short, and searchable by era, genre, artist and playlists, such as award winners, dance icons, international artists and much more. Once you start, it’s like eating yummy candy—you just can’t stop.

One of the clips shows Marge Champion dancing with her son, Blake, in 1986. Owen recalls going through some old videos and coming across it and wondering if she had a copy. It turns out she didn’t, and he was able to get her one. Blake died in a car crash the year after that dance. To get her that film, says Owen, “That was everything.”

As if his work at Jacob’s Pillow weren’t enough, Owen is the author of A Certain Place: The Jacob’s Pillow Story, and has written numerous pieces for Dance Magazine, Performing Arts Resources, The Grove Dictionary of American Music, the International Dictionary of Modern Dance, and numerous other publications. He has also curated exhibits across the country and served on many board and councils.

In 2000, Dance/USA selected him for its Ernie Award, honoring “unsung heroes who have led exemplary lives in dance.” In 2012, the Dance Films Association presented him with its first Dance in Focus Award in recognition of his outstanding contributions to the dance film genre, while the José Limón Dance Foundation gave him its Preservation Advancement Award.

If you visit the Pillow and you see someone who looks like a life-sized elf, with lively eyes and a quick smile, who seems to vibrate with enthusiasm, that’s Norton Owen. Feel free to say hi and to ask a question. And don’t forget to check out the rest rooms.