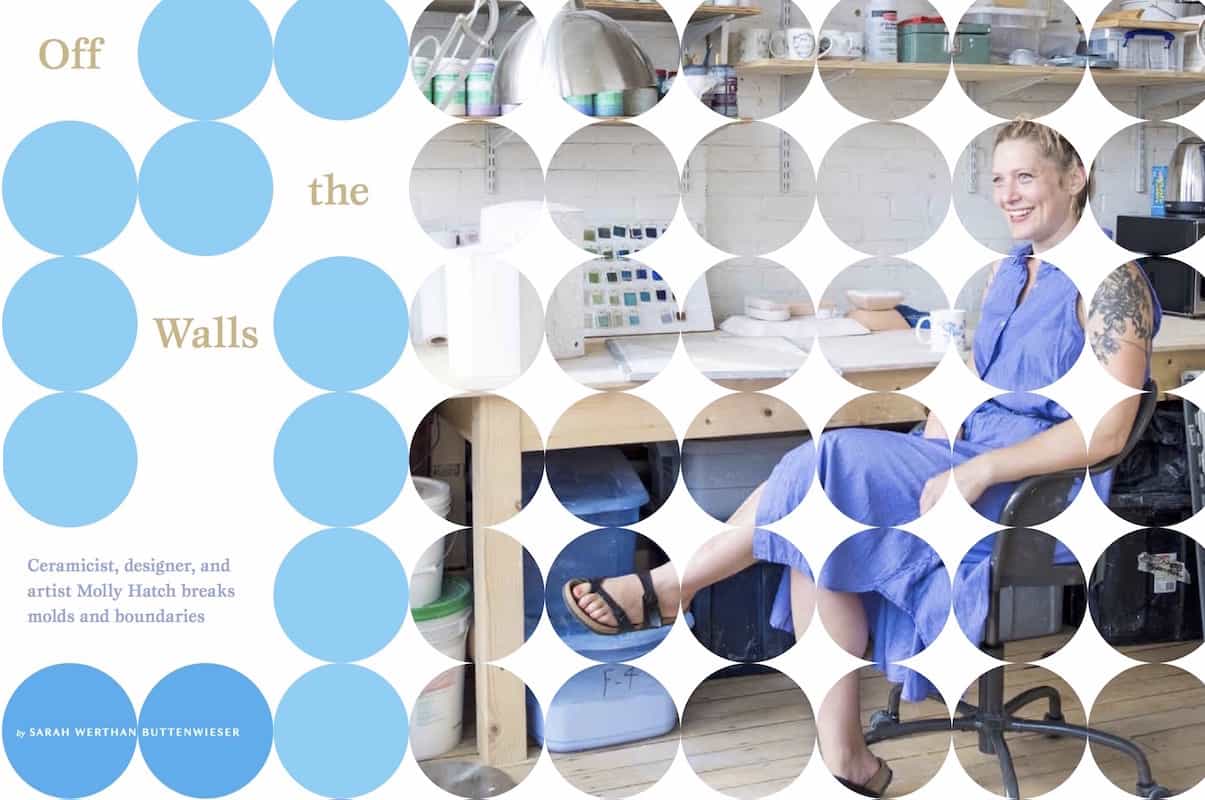 Approaching Molly Hatch’s ceramic studio on the third floor of Florence, Massachusetts’ Arts and Industry building, every single footstep resounds through the hallways. That’s the way of former mill buildings. This one, solid and comfortable with its little bit of dustiness and roughness, leaves plenty of space for artists to remake its purpose.

For Hatch, the spot’s pitch-perfect, a leisurely walk from her house and design studio with her black dog, Hank. “When you’re a young person dreaming of the studio you’d one day work in, this is what you envision,” she explains. In Sunday mode, which is not unlike artist-at-work mode — jeans, a striped blue and white tee, and sneaks, auburn hair pulled into a high ponytail — Hatch is ready to lift plates from one of her kilns. The plates belong to an installation titled Illume for Todd Merrill Studio Contemporary in Manhattan. This “plate painting” depicts a blue and white vase, surrounded by a shiny, solid gold “frame.” Each plate that helps comprise the vase is painterly, simultaneously a swath of the overall pattern and a complete work of art in itself.

Hatch is known for her plate paintings, installations that rely upon individual painted plates organized to create a larger image. The first series, Covet, showed at Sculpture Objects Functional Art and Design (SOFA) in New York in 2012. For that, she drew upon the collections of the Museum of Fine Arts, Boston and New York’s Metropolitan Museum of Art.

Probably the best known—and the largest to date—of the plate paintings is Physic Garden, a permanent installation at Atlanta’s High Museum that measures 22 feet high and 17 feet wide, and required 456 plates to complete. Two 1750s Chelsea Factory plates that depict realistic flora and fauna in the “Hans Sloane” style served as source material for the project. Hatch finds the setting of Physic Garden in the museum’s Margaretta Taylor Lobby inspired. “There’s a window, and beyond the window, a reflecting pool,” she explains. “At night the wall, window, and reflecting pool move you, your eyes, in and out of the space. The architect put in an exhibition wall at exactly the right spot so that the work and the space are phenomenal fits for one another.” 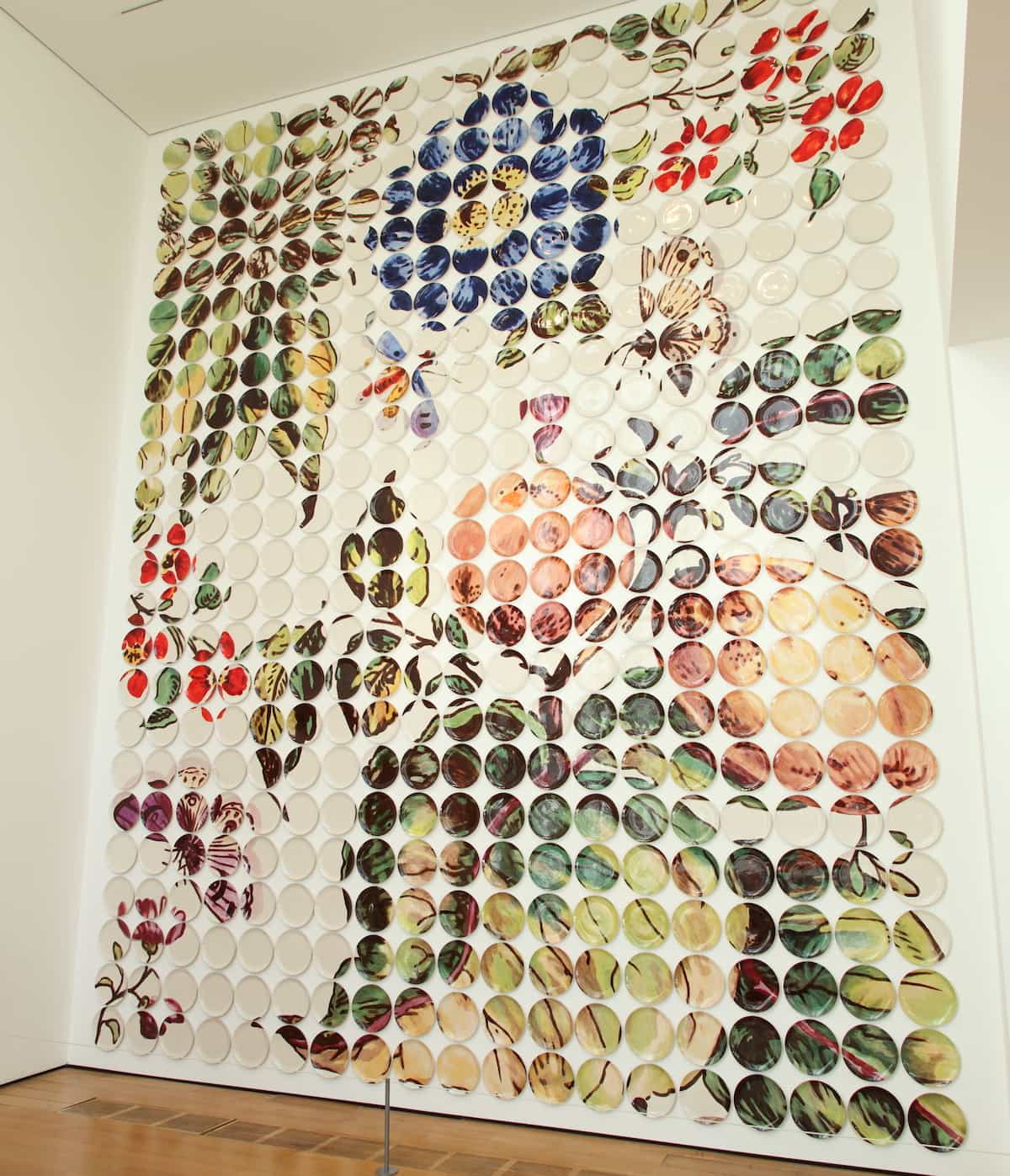 Her latest big project, Passage, a solo show at the Dianich Gallery in Brattleboro, Vermont, co-presented with Todd Merrill Studio Contemporary, is a departure from the plate paintings. “The plate paintings rely upon the boundaries of the wall,” says Hatch. “I want to question the wall. I’m interested in making three-dimensional paintings that reveal different images from various angles.”

One way to sum up Hatch’s voraciousness as artist and designer is this — she’s a consummate conversationalist. Rather than rely on words, her conversations take place between past and present, commercial design and fine art, boundaries and space.

While she was creating Passage, which runs through July, her studio space was relatively empty. The sole full wall—no doors or windows or shelving—was blank. The floor was mostly bare, save for kilns sitting like urns and a number of large ceramic blocks—clean, white, and ready—in neat piles. The blocks were impressive, not exactly massive, and yet notably larger than most ceramic objects. Imagine ceramic versions of wooden blocks found in a preschool classroom—but large and somewhat wondrous, like an Alice in Wonderland teacup. 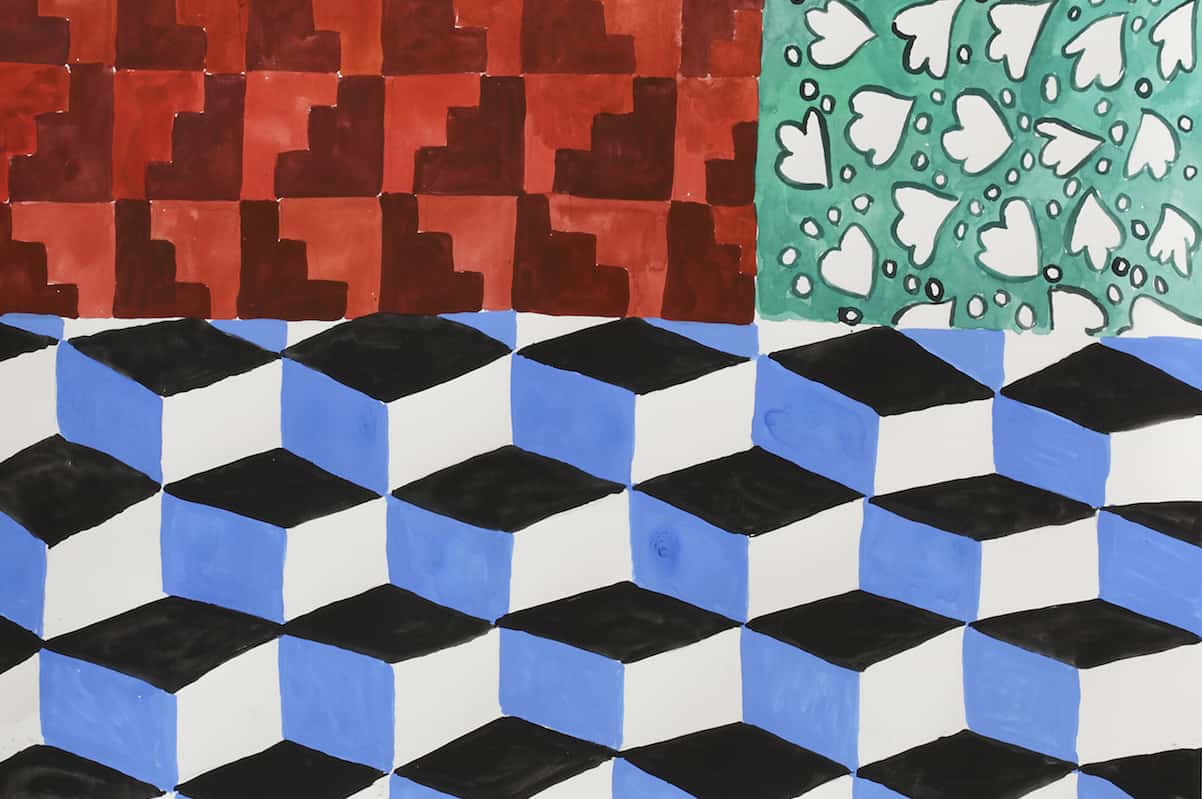 Hatch painted the blocks in different patterns, from a Middle Eastern tile to a weaving. These patterns generally do not “go together.” In the gallery, the blocks are set upon wooden and ceramic plinths painted in patterns and faux wood grain. Passage evolves from a series of cube vases Hatch recently created, objects that aren’t functional vases, but cubes with cutouts in the shape of vases to play upon both the idea of functionality and, simultaneously, negative space. For Passage, she posed a related question: “Do I need that cutout?”

As for the big blocks: “I wanted a chance to pull my work into space. I wanted it to come off the walls,” Hatch explains. “The idea is the pieces could be played with and restacked. I want to explore pattern and form, but in a three-dimensional space.”

Patterns often seen on functional objects, from vases to wallpaper, cover these non-functional forms. As if that idea isn’t sufficiently intriguing, Hatch plays with other juxtapositions. Some patterns are from history and others are more contemporary ones that tend to show up in a design context rather than art. She wants to lure them from functionality to see how they fare.

The Dianich Gallery is much more intimate than other places Hatch has exhibited. “I was drawn to that—and the chance to reach a different audience,” Hatch says. “In this setting, I’m able to focus upon a small, pointed project—and to take some risks within the constraints of this venue—a small gallery in a small town close to home.“

Hatch’s childhood and family background have a great deal to do with her sense that perpetual conversations arise from juxtaposing things people don’t often put together. Her parents eschewed a world of refined society and instead moved to southern Vermont, where they farmed. Décor at the farmhouse was unusual: Art and antiques in her family’s home and extended family’s residences were, like pieces she plays off of in her own art and design work, beautiful and significant and fine and enduring. 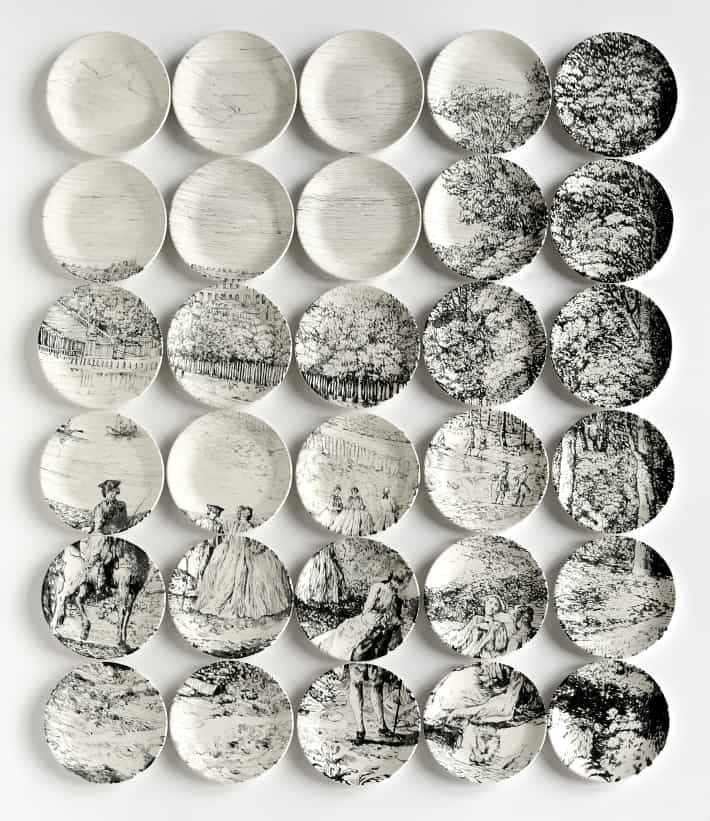 As an adult, Hatch contemplates the role of beauty and delicacy, but she does so in the milieu of simple, hard work. She is a powerhouse. She credits her work ethic to her upbringing on the farm and her aesthetics in large part to family influences and exposure. “To have grown up with old-money objects and the farm’s demands, lessons I drew upon were complex—about taste and lifestyle,” she says. “I love that I interact with these questions on a daily basis.”

Interior design is another of Hatch’s influences. “I read interior design magazines to see what interests designers,” she says. “For example, I love the idea of putting an old object on a mantel and a contemporary cutout vase and pretty much encouraging the objects to talk to one another.”

That sets the stage for a paradigm that makes sense to Hatch. “When I first began to do design work for Anthropologie, some ceramic artists thought I was selling out. I disagreed and I still disagree,” she says. “I need to focus on creation of both the consumable and the unique object, and, rather than see those as oppositional choices, I find them complementary.”

She constantly extends ideas developed in one realm into another—she might create a one-of-a-kind vase and then make a series of commercial vases that are decorated with her paintings of vases. “I love to operate in consort, and to see where designs land best.” She maintains enthusiasm for the large plate paintings or the new work in “Passage,” and she also enjoys her ongoing work with Anthropologie. The way Hatch works—process and breadth—represents her unique heritage. 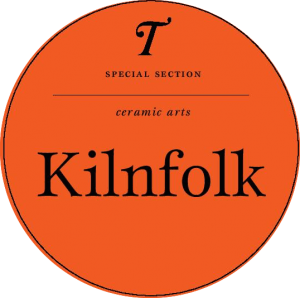