A cool evening and a full moon added to the ambiance of a summer theater night in The Berkshires.

It’s hard to remember a political campaign or an election cycle, where candidates actually had solid platforms, well-thought out solutions, ethics, and integrity. Fiorello, the award-winning portrait of New York Mayor Fiorello LaGuardia, and his rise to political power during and after World War I, deserves the accolades. It’s one of only nine musicals to win a Pulitzer for drama, and one of a trio of winners with political themes, joining The Gershwins’ Of Thee I Sing, and Hamilton for the well-deserved accolades.

The composer/lyricist duo, Jerry Bock and Sheldon Harnick provided Fiorello with a group of pop standards, as they did with later hits She Loves Me and Fiddler on The Roof (both of which are playing on Broadway in well-received revivals). When Fiorello opened in 1959, many theater-goers remembered LaGuardia (who died in 1947). He was the mayor who read the funny papers on the radio when the newspapers were on strike. He was the mayor whose plane ticket said “New York” (even though there was no commercial airport in the Big Apple and flights went to Newark) who got the airport built which bears his name open.

Over the years, the musical Fiorello fell into the museum-piece category, rarely revived. Encores produced a concert version in New York in 1994, and again for its 20th anniversary (which co-starred Kate Baldwin, a musical actress who’s a regular at Berkshire Theatre Group. The Jerome Weidman and George Abbott book is well-crafted, and the Bock and Harnick score is classic.

Bob Moss’ direction serves the production well, and Evan Zavada’s music direction brings out the best of the score. Zavada is also on keyboards, accompanied by a violinist, which made me wish for fuller orchestrations and a larger pit band. Michael Callahan’s choreography, particularly for “I Love A Cop”(beautifully performed by Chelsea Groen as Dora and Dan Cassin as her cop) and the political hacks in “A Little Tin Box” was entrancing. Fiorello’s big razzle-dazzle number, “Gentleman Jimmy”, although well sung by Amy Welch, was flat on the footwork.

Carl Sprague’s set, which represented The Big Apple from 1915-1933, was simple and clever–a good match for the intimate Unicorn stage. David Murin’s period costumes were stunning, and Matthew E. Adelson’s lighting designs and Brendan F. Doyle’s sound designs enhanced the production. Adelson does a lot of work with the Five Colleges dance department, and he has a great way of lighting movement. 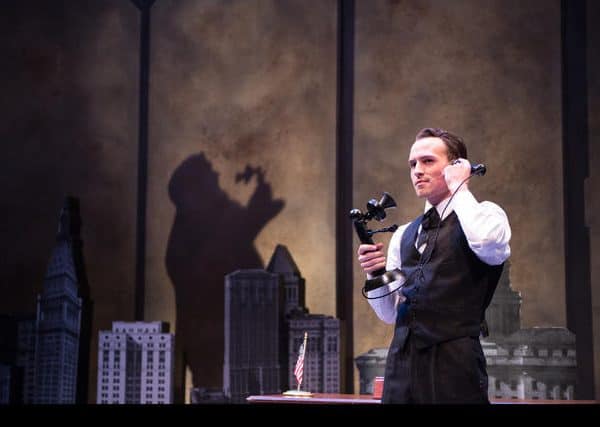 Fiorello showcases graduates of Berkshire Theatre Group’s Apprentice programs and community theater productions, along with some recently graduated theater majors. Austin Lombardi as Fiorello was a strong lead, and his second act reprise of “The Name’s LaGuardia” bordered on being a showstopper. Katie Birenboim as Marie, Rebecca Brudner as Thea, and Chelsea Groen were all solid in their solos. Rylan Morsbach, who gave a stand-out performance in last season’s production of The Homecoming, was a charmer. The ensemble made the Harnick and Bock songs, particularly the musical’s most famous waltz, “Til Tomorrow” a beautiful rendering.

Fiorello evokes an era when politicos cared about their constituents, and a time when Broadway scores had melodies that were melodic. The Berkshire Theatre Group production of Fiorello, low on special effects, is true to its script and score, and never feels dated. The performances of Austin Lombardi and Chelsea Groen ought to bring multiple smiles on a summer night. 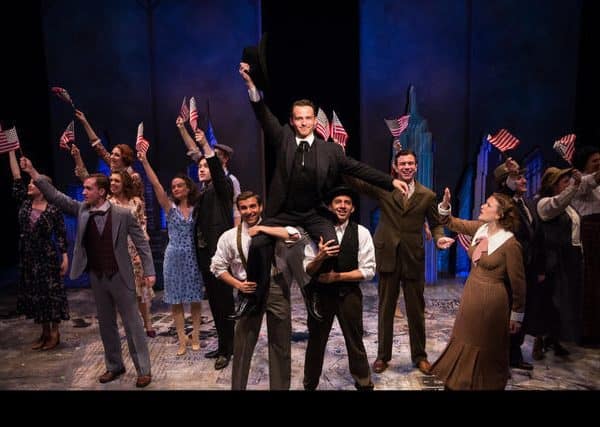 The ensemble of Fiorello. Photo by Emma Rothenberg-Ware

*This review first appeared in the Westfield News Group*