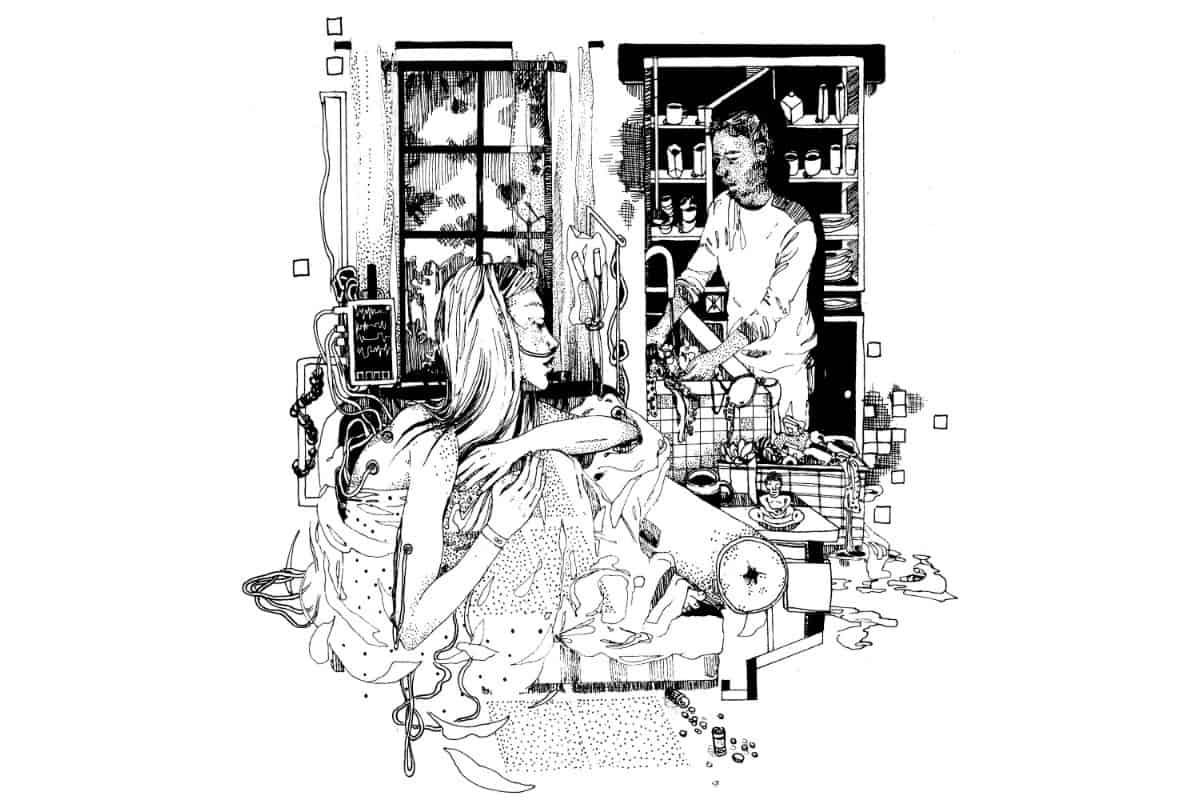 A snippet from a longer work in progress by Sonya Larson, about a woman returning, reluctantly, from the brink of death.

The following is from a novel by Sonya Larson called The Last Date, about a woman returning from the brink of death, but unhappily so. The novel is a work in progress.

When I was dying, Shui was nicer to me. He used to pull my undies from the dryer—three days’ forgotten and hardened to crinkled cocoons—then dump them on our bed in a rocky heap for me to sift through. My lacy briefs! My thongs! You’d never guess that at one point these delicates had made Shui’s eyes roll back in his head. “You bought me this!” I’d say, waving a satin leopard print. “Now you find it as thrilling as a potato.” I had humor, yes, but this could work against me—my husband never comprehended the suffering I had inside. Instead he laughed along, dumbly, like someone in a movie who’s about to get punched.

But now: here we were. I was dying and finally he saw. Now he gathered my undies and washed them by hand, afraid that the dryer would shred them: these things that would be the final relics of me. Plastic tub in the kitchen sink—the one with the worn-green rim. Bubbles and steam. Squeeze of soap. In went both his hands. From my stuck-place on the couch, I couldn’t see, but I could hear. Quiet sloshing. Wringing each one out in sudden sloshes and pauses. Easing them over the shower rod, where they’d drip drip drip to the floor until finally that ceased too.

A dream it was. Like falling in love again. But better, because in a way I was both falling for my husband and someone else. Someone kinder, more thoughtful—the person I’d always suspected that he could be. When my undies were dry, Shui folded each one neatly in half, like a taco. He’d carry a stack to the coffee table that was now my nightstand, in the living room that was now my bedroom. All the blinking machines and snaking tubes and charts to track my stats: in this moment these things seemed to disappear, sucked into the walls. I pulled my sweatshirt sleeve over my hand and wiped at my own tears—I didn’t know he had it in him. Too bad, that at the end of my life, I would finally understand just what a husband I had had.

At night, when I tried to sleep, trains from North Dakota blew forlornly on their horns, newly rich from fracking country, echoing through the snow and telling of the future.

Okay. So I wasn’t going to live a long and happy life. But perhaps—despite all odds—I would live a short, happy one. Or at least very happy at the very, very end.

In the mornings Shui hustled. He took care. He’d stand at the door and collect all those muffins and flowers, offered helplessly by randoms with their frowning, pained expressions. We knew nobody in our building, just Dan, because generally we felt that they were a different sort than us: “young professionals,” as the landlord called them, who liked bicycles and groceries delivered to them and watching eight straight hours of television. Except not even on a television—on a sad little laptop, which they stared at all day anyway. We made eye contact with the Young Professionals only in the basement, negotiating washing machines. I must confess that it was me who removed their sopping loads when they didn’t quickly fetch them—I’d heap them on the dryer and run upstairs, coward that I am.

And yet, here they came; somehow they had learned of my woe. Somehow all my crimes—laundry and otherwise—had been forgiven. They brought us Groupons for Indian takeout. Lavender bath salts, pillows highly rated on Amazon, jade figurines of horses and Buddhas for luck and health and whatnot. We lined them up on the coffee table and blinked at them, like thieves stunned by our useless load. I picked up a Buddha, thumbed its cold and laughing belly. So this is what the YPs thought of us—well, let them think it. Luckily, someone (my aunt? the neighbor?) had also brought some cigarettes, beautifully stacked in a long white box. I seized upon them, tore at the plastic. Then I blew a cool stream of smoke in the air above our couch. Shui cringed—he didn’t like this. Of this he was not a fan. But he didn’t stop me—how could he stop me? I could be dead in a matter of weeks.

I didn’t want it to end. But by “it” I mean this part—this very-very-end part of my life. The rest of it: whatever. Obviously I’d had enough.

I could tell Shui was getting lonely. He both itched to get away from me and was scared to leave me alone.

He invited Dan over. I didn’t like Dan. Dan had a teaspoon of bro in him, and when he got uncomfortable it was more like a tablespoon. “Yo yo yo,” came Dan’s rumbling voice in the hallway. “Brought these from my mom. Can’t stay long, sorry.” He was also a Young Professional and half our age, still living with his mother on the fourth floor. In the doorway, Shui collected a large, cloudy Tupperware, and around his body I could see the purple flashes of Dan’s Vikings jersey, which he seemed to put on desperately every day when he got home from work.

“You don’t look so bad,” Dan said at me, neck stretched to see around my husband. “Your hair and stuff. You look hot!” He laughed, awkwardly. He had as much grace as a refrigerator, but I could hear the kindness in him.

“Did I say that you didn’t?” said my husband.

“I mean it—she’s looking great. She really actually does.” And that’s when Shui nudged him into the hallway.

They stood outside the doorway, discussing things. Clearly Dan was not coming in. I couldn’t tell if he dared not venture further or if Shui wouldn’t let him. Either way, they both seemed to understand that this place—our home—was something toxic, secret, not to be witnessed by others. I heard them murmuring and talking of football, with long and nodding pauses. Dan had a brother who had just been redeployed. “It’s weird. He was just, like, here,” said Dan. He contemplated silently, then laughed again. “But hey. I get to drive his car?”