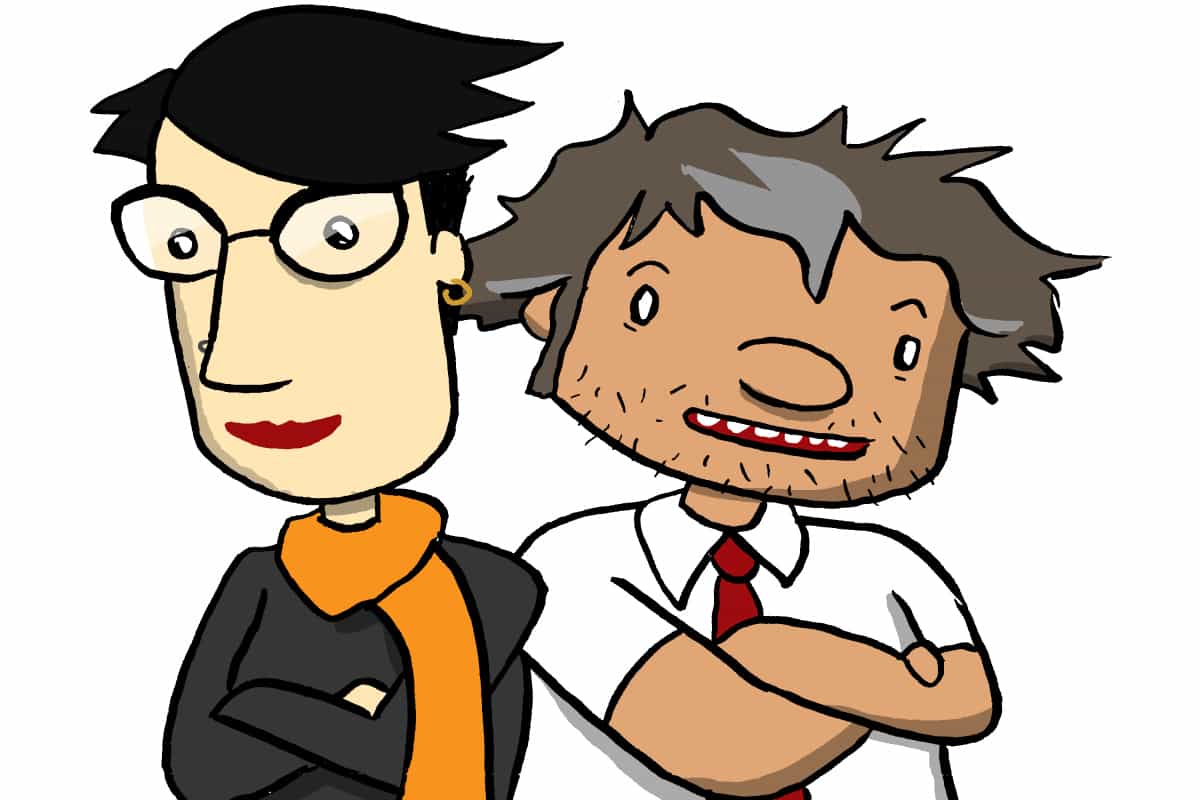 At first glance, TopatoCo may seem like any other online merchant that caters to the nerd crowd: T-shirts with references to science, wizards, and cats; plush dinosaurs; and jewelry made from 12-sided dice. What one might not realize is that TopatoCo is enabling livelihoods for nearly 100 independent artists ranging from cartoonists and podcasters to game developers and musicians. Most of these artists share their work for free on the Internet and make their income by selling ad space and, more lucratively, merchandise. Fans support their favorite creators by purchasing T-shirts, prints, and the aforementioned plush dinosaurs—and it all comes from a 5,000-square-foot warehouse in Easthampton, Massachusetts.

Jeffrey Rowland founded the company in 2004 from his apartment in Oklahoma. Since then, the company has moved to Easthampton and grown into a business that employs eight people in addition to Jeffrey and his wife and business partner, Holly Rowland. Holly has also started her own offshoot business called Make That Thing, which helps artists manage and fulfill crowdfunding campaigns.

I interviewed the power couple via e-mail about how the business has evolved and what they see in their future.

Sara McHenry: Jeffrey, how did you get the idea to start TopatoCo?

Jeffrey Rowland: Hundreds of years ago, in 2004, I had a boring office job and wanted to become a cartoonist. I was making comics and uploading them to my website from work. One day, Old Man Fate stepped in and handed me my walking papers, freeing me from that job. The next month George W. Bush got “reelected,” and I made a T-shirt about it, which sold 1,000 copies in a month. That gave me enough money to live on for a few months and motivation to start a company so I wouldn’t get arrested by the government. A character in my comics is a superhero space potato-attorney named Topato Potato who only exists if Earth children buy his merchandise. So to answer your question: TopatoCo was born in 2004 because I got laid off and the government said George W. Bush got to be president again.

SM: What drew you to western Massachusetts, and how do you think location has shaped the business?

JR: I desperately needed to escape the awful scene in Oklahoma, and due to the nature of the Internet, I have friends all over the world. One is Rich Stevens, a fellow cartoonist who makes a comic called Diesel Sweeties. He had just moved into an old converted mill building in Easthampton, and after visiting him for his birthday in January 2005, I decided I liked it there enough to pack up my stuff and drive there in June. I lived in his gigantic closet until I found my own place.

Holly Rowland: I’m a Massachusetts native, but I grew up in suburban central Mass. When I was in high school, I visited a friend in Northampton and was like, ‘Oh, I’m not a weirdo here. Cool.’ After I graduated, I threw all my stuff in my friend’s car and moved here permanently. I think that western Mass is especially conducive to growing a business like ours, because there is a huge DIY culture out here, and such a great art-as-commerce community of people who just want to create cool things and get them out in the world. 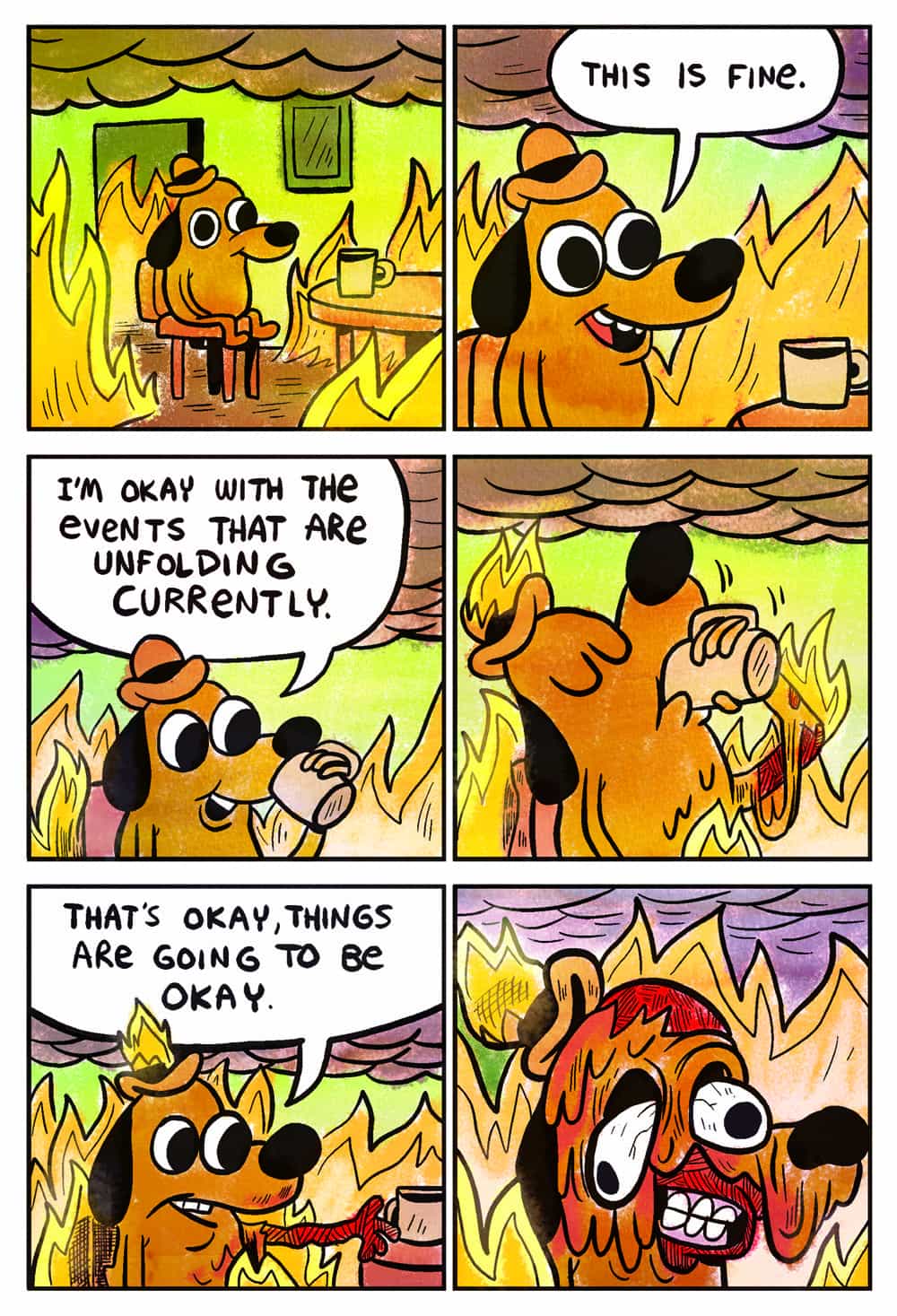 This is Fine by KC Green

SM: Holly, how did you get on board?

HR: I was working as a waitress in a cocktail—okay, that’s not exactly true. I was working at a sandwich counter in the building where Jeffrey and Rich lived, and they would come in every day. They said it was to ‘get lunch,’ but I knew they were drawn to my magnetic personality. The timeline of Jeffrey and I becoming ‘business’ partners and ‘life’ partners is a little murky, but basically I needed a change of scenery and was really into the idea of what he was building, so I started working with him instead of slinging sandwiches. As we became more involved with each other, I became more involved in the business, and the next thing we knew we were building it together.

SM: And Holly, you have an offshoot company called Make That Thing, correct?

HR: I do! As crowdfunding became more and more popular as a business model, it became clear that when you give some people a pile of money, they immediately become Julia Roberts in Pretty Woman, crying and dropping soggy bills all over the hotel lobby because she can’t figure out how to buy a dress. Make That Thing is like the hotel concierge guiding you through your shopping montage and making sure you look hot for the opera. To not use a ’90s romcom analogy, Make That Thing helps people prepare and execute their crowdfunding campaigns, and fulfills all campaign rewards to backers. We’re very good at it.

SM: What’s been the biggest challenge in owning your own company?

JR: The biggest challenge in owning a company is that I did not know how to own a company, like at all. I never took a business class and only really knew how to design weird T-shirts and make fairly acceptable comic strips and build a website. The business part quickly escalated to something I needed to concentrate on, so I would say the compromise involved in transforming from a creative person to a creative person who has to worry about profit-and-loss reports has been the biggest challenge.

HR: I had managerial jobs that I was pretty okay at, so I foolishly thought I could sort of transfer that knowledge into helping Jeffrey run this full time. It turns out that running a business is really hard and scary, especially when you have kids! It feels impossible to balance. Sometimes you’re just gonna feel bad that Mommy ordered pizza again.

JR: The best part is that theoretically I can choose my own schedule and work when and where I want to, which is negated by the fact that there is a never-ending amount of work to do. Like, it will never end. Many people would be terribly inconvenienced if I were to suddenly die. They would probably do a Weekend at Bernie’s thing with me so they can keep getting my body to do work.

HR: I agree with that! It’s nice to be able to work from your bed, but on the other hand, maybe you shouldn’t have to work from your bed. Also, and Jeffrey thinks I’m crazy for this, I really like working conventions. I love travel, and I love event planning, and I’m inherently an extrovert, so it’s kind of the perfect job for me. 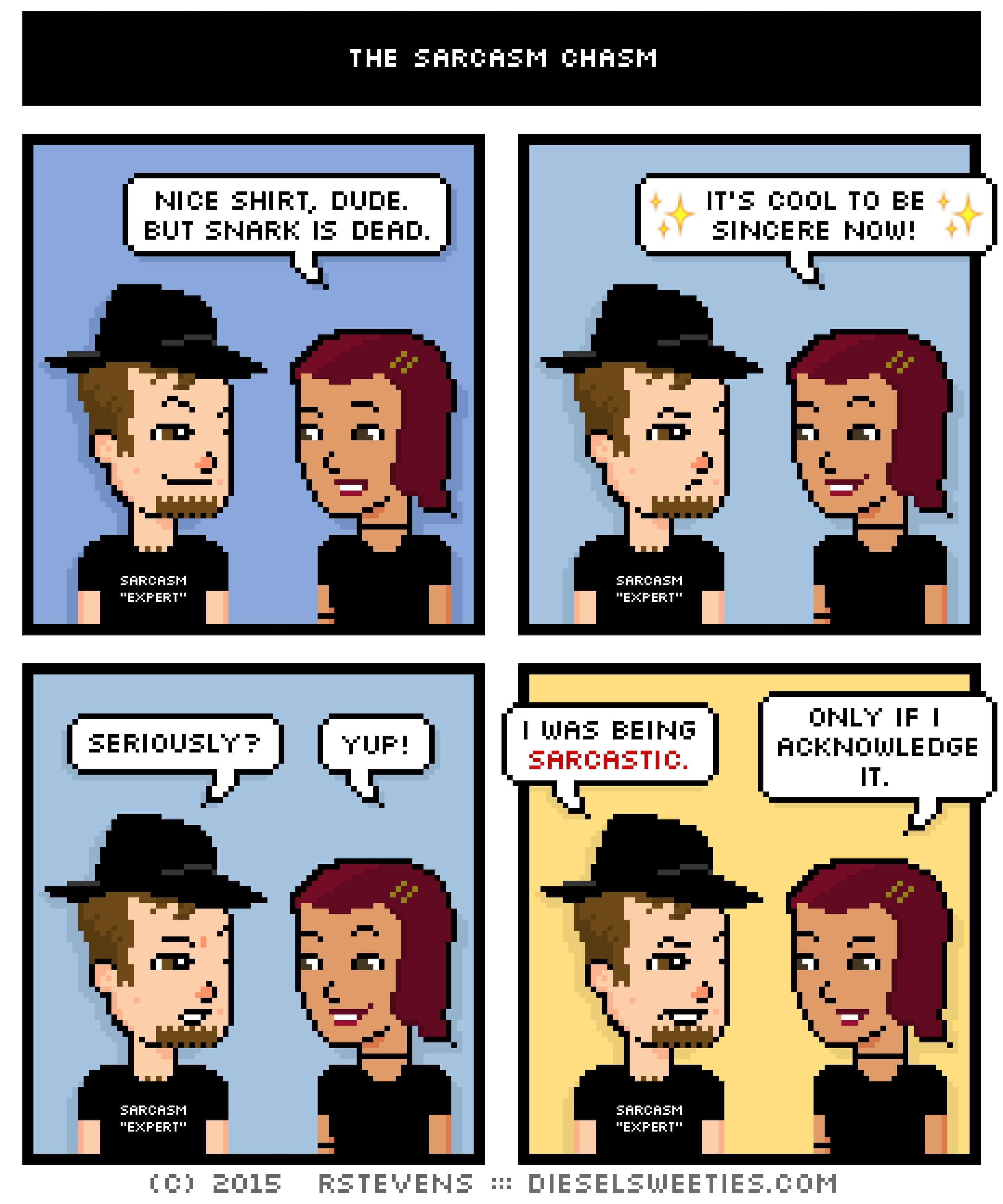 SM: How did you imagine the company would grow and change back when you started?

JR: I grew up poor in a dirt town where I never imagined I would ever even have a reason to go to New York City. I am also a sad person, so I assumed and still assume the floor is going to drop out from under us at any time. I had no idea it would grow and change. I was just happy that I was able to make a living from it. It became its own monster, and I was and still am just trying to handle it and clean up after it and hope it doesn’t kill anybody.

HR: We had no way to predict how fast this culture was going to change and grow in such a short time. Like, if you open a hardware store, you have an idea of what that business is going to be like in 10 years. You can make plans and be reasonably sure that they’ll work down the road. Ten years ago, when I got into this, our world was vastly different. Not only do tastes change with the zeitgeist, but technology has advanced so much. When we started, I think I had a Motorola Razr, and now I can do the bulk of my work from my iPhone. Not to mention the rise of crowdfunding, which has seriously changed how we do business.

SM: What one thing do you wish you had known when you started?

JR: I probably should have studied business models and gotten more advice from people who knew what they were doing. But then again, at the time it seemed like no one was really doing what we were doing. Giving away free comics and entertainment and hoping people would like it enough to buy your cool merchandise was and continues to be a weird idea. I wish I’d known how to do business correctly.

SM: Where do you see the company going in the future?

JR: We’re diversifying our portfolio with many different kinds of creators in the field of independent digital entertainment to include more podcasts, musicians, authors, and all different types of artists. We hope to build an additional warehouse soon and expand the range of products we can produce in house. I see the company going in a linear direction. 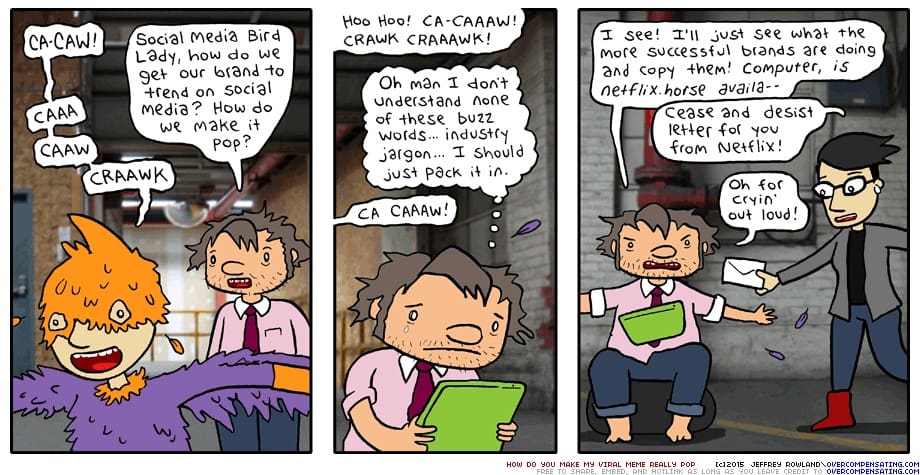 An Overcompensating comic by Jeffrey Rowland

SM: What’s a career highlight you can point to?

JR: Getting to meet and work with so many artists I’ve admired for so long has been a perpetual highlight. When we signed Tom Tomorrow [the creator of This Modern World], I understood what it must feel like for a person to get retweeted by Lady Gaga. I’d been reading his comics for almost 20 years, and now he’s this guy I’ve had beers with.

HR: Same! Getting to hang out with people whose work I love is really something special.

SM: What do you want to do when you sell the business to Facebook and can retire?

JR: First I need to find whoever makes up the value of media websites and get them to cast that magic spell or whatever they do. Then I’ll probably build a secret subterranean kingdom and vanish until the day I’m needed to save mankind.

HR: I will be queen of the subterranean kingdom, emerging during the summers to sip rum and run a crab shack on a tropical island somewhere.