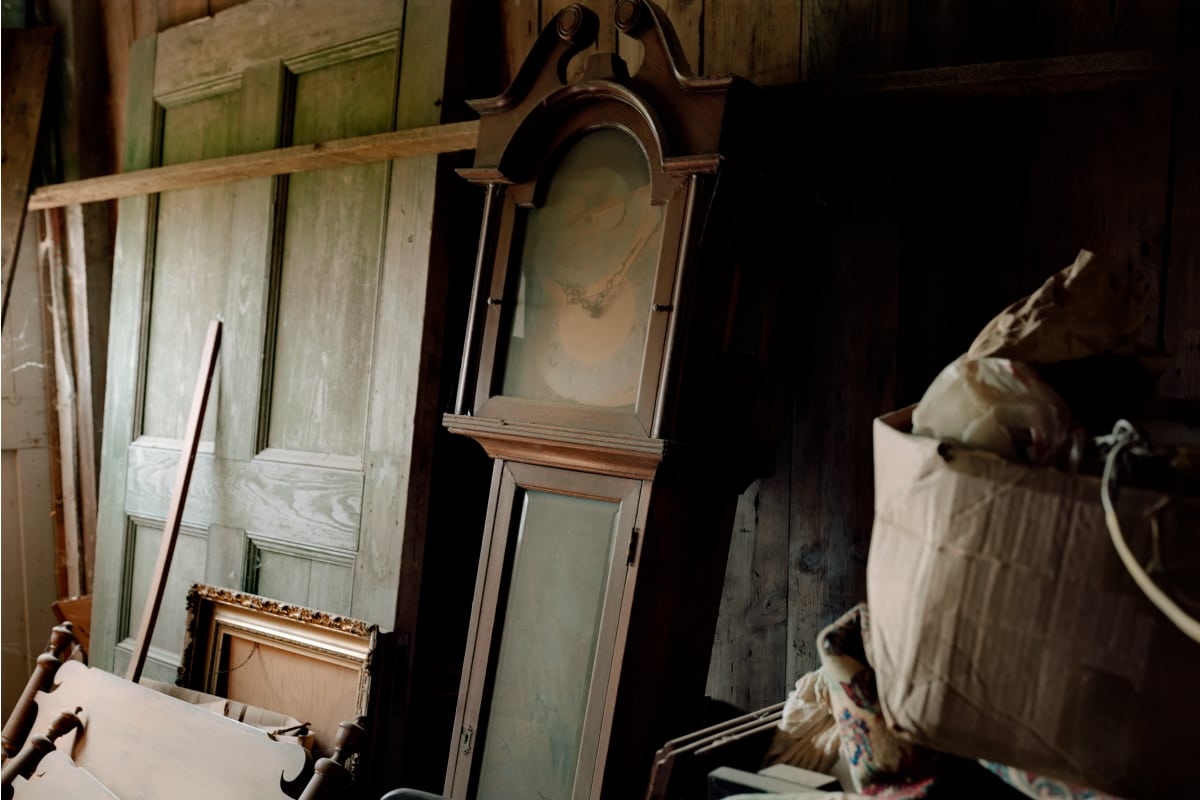 When photographer Sarah C. Butler first visited her mother after getting a call from her mother’s husband that he was concerned about her health, she agreed to the trip with trepidation. She and her mother had had a tumultuous relationship, and she had not visited her mother in eight years, a time during which her mother had purchased her “dream” home not far from the Mount Desert Isle home where Butler was raised. An abandoned Cape complete with a barn and acreage for the animals she loved, the house, her mother told her in their infrequent phone calls, was well on its way to being restored.

Instead, what Butler saw as she drove up to the property was a ramshackle house that looked almost uninhabitable, a physical metaphor of their relationship and her memories of her mother as a child. Or so it seemed at first glance. 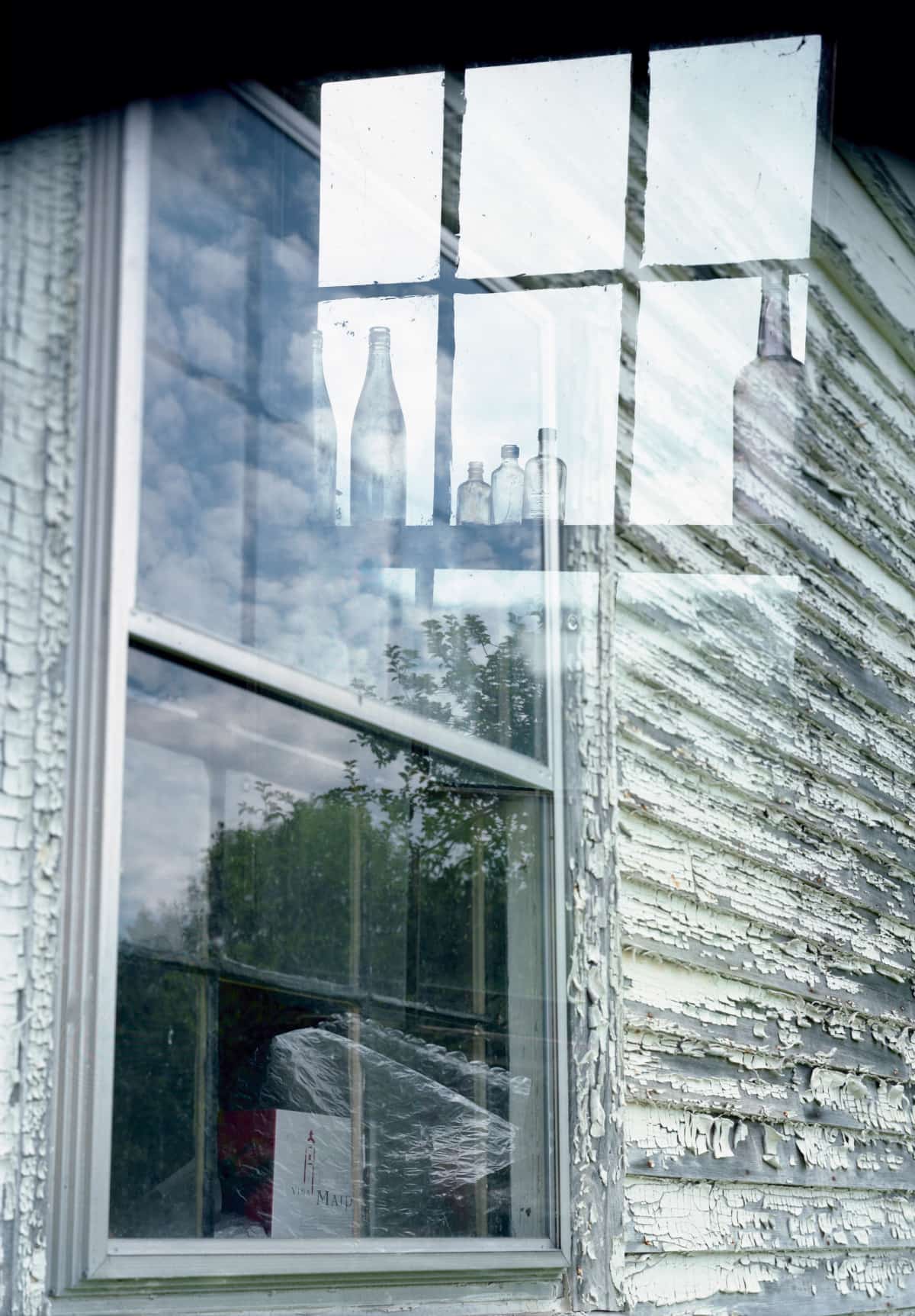 Looking Out, Looking In from Frozen in Time, Sarah C. Butler

What evolved, after six years of photographing the house and her mother, was a different story, a story scraped away like so many layers of wallpaper as Butler took hundreds of photographs of her mother and her life. Slowly, Butler grew to love her mother once more. They became, she says, friends. The house may not have been repaired, but their relationship was. 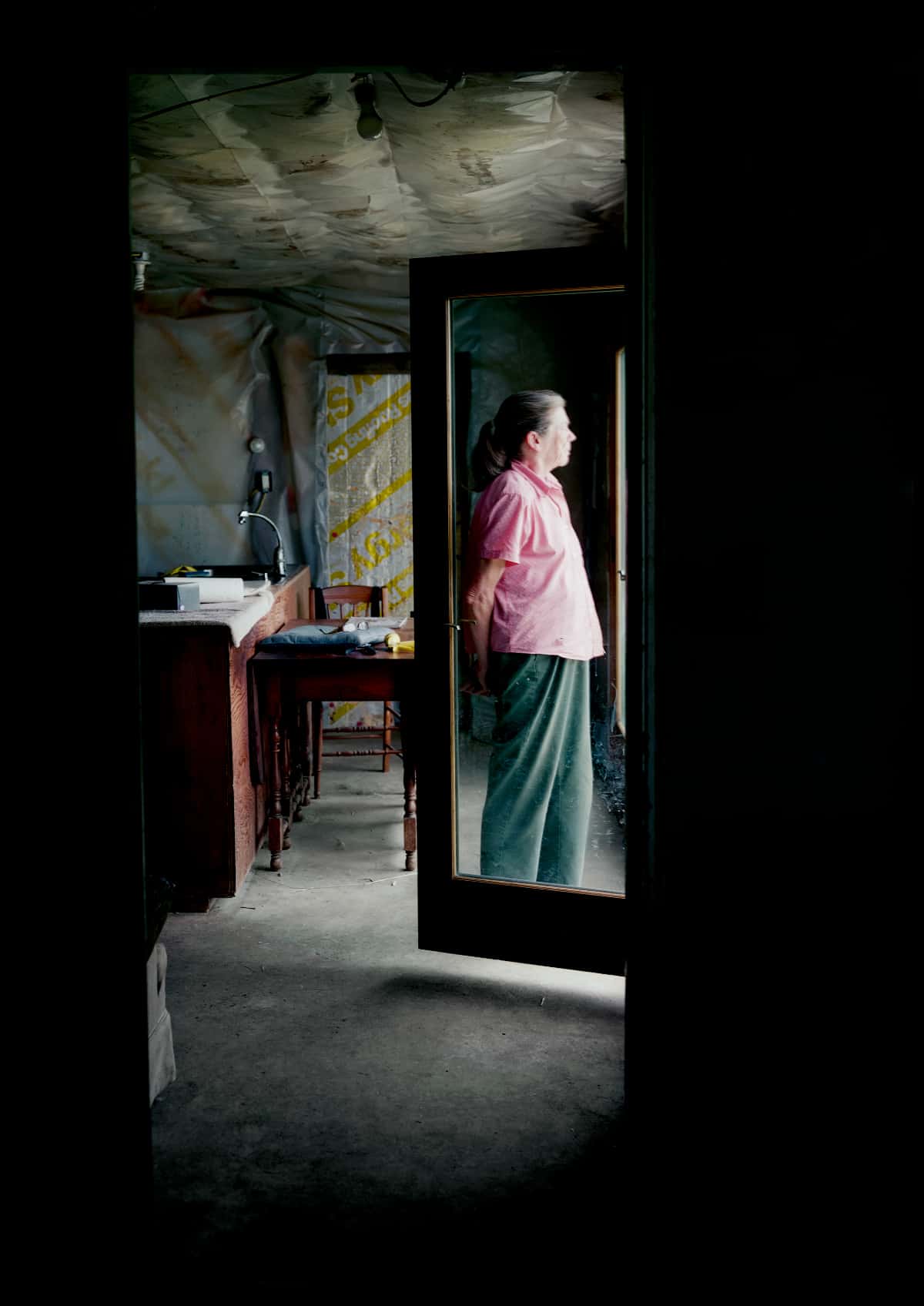 “We became great friends, which is incredible. I have come to respect her as much or more than any woman I know,” Butler says. “She did things the way she wanted. Once I was just there and was her friend, she’s a strong person. Who am I to interfere in what she wants? She gave me a good life.”

This love story to Butler’s mother, Frozen in Time, is being released in conjunction with an exhibit of some of the photographs at Star Gallery in Northeast Harbor, Maine. The large-format book—the only format Butler, who shoots film on 5X7 sheets, uses—is stunning. We sit on Butler’s shoulders as she peeks into her mother’s life and, with Butler, we slowly see the love beneath the dirt and chaos. “Going there was shocking,” Butler says of her initial visit. “The only way for me to go there was with my camera. It was a shield, an excuse for me to be there.”

During the first year, it was an image of two dresses belonging to her and her sister, hanging pressed and pristine, lovingly preserved amid the dirt and despair, that caught Butler’s attention and enabled her to keep going. “I couldn’t let go of it,” she says of that photo. “I knew that piece of my mother that was good, was kind, I knew that mother was there even though we hadn’t gotten along for years. I determined from that image to continue the project.” 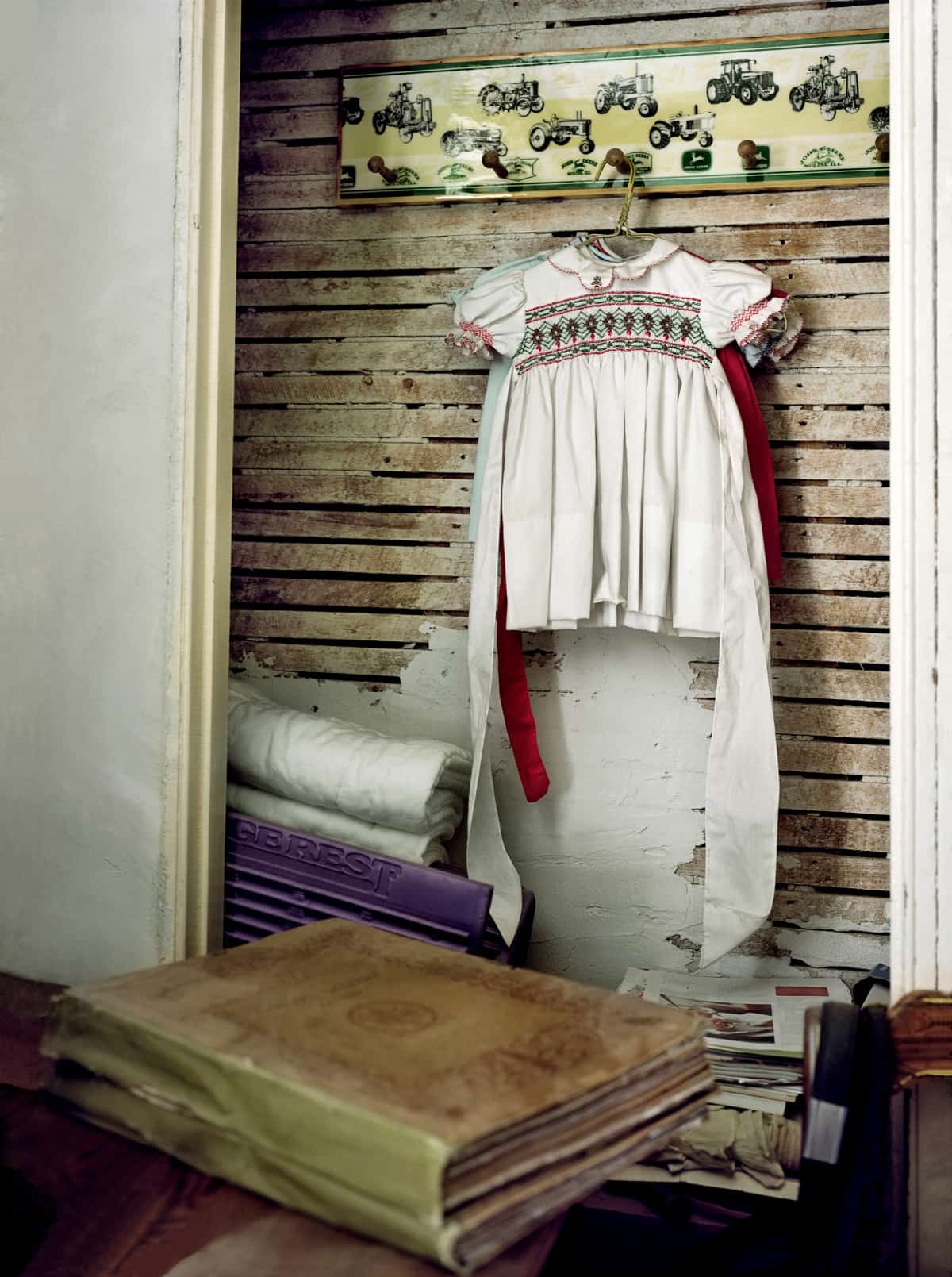 Dresses, May 2009 from Frozen in Time, Sarah C. Butler

“I never intended to show it to anybody. I was doing it for myself,” she continues. “I just reacted basically to what was in front of me. In time I learned from my own photographs. I learned from the work, which is different than I’ve ever worked before.”

What Butler learned was that, contrary to the 8-year-old version of her life, a story she’d been telling and retelling since that year her parents divorced, her mother actually did—albeit in a damaged way—love her and her sister. “Initially I would shoot a photo like the sink and the emptiness of the space proved her failure as a mother,” Butler says. “Over time I became comfortable with that stillness. She loved that house. In fact I’d fallen in love with that house.” 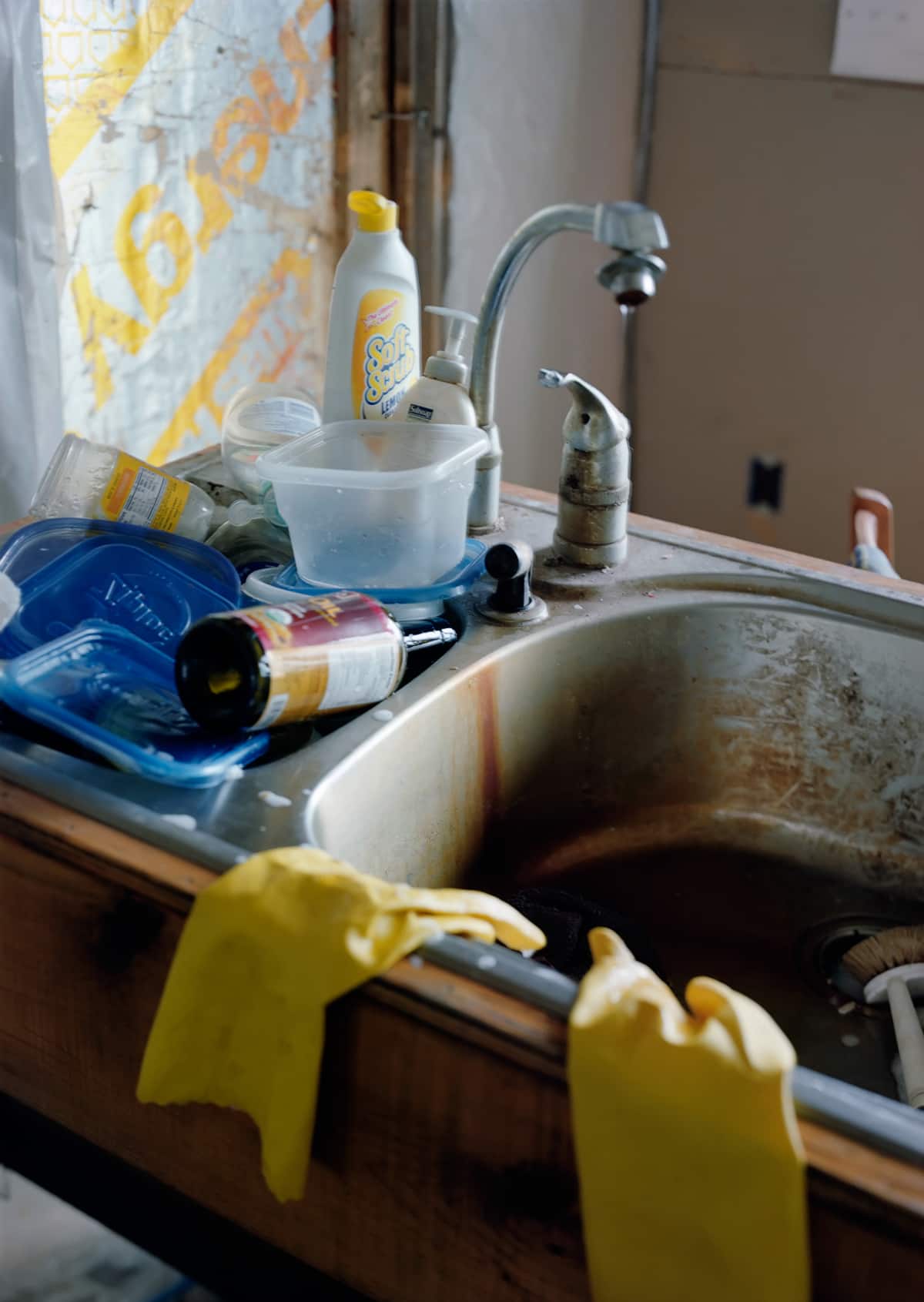 Initially it didn’t go smoothly. Butler’s mother often kicked her out. But after trust developed, it became, Butler says, a collaboration. “She would tell me stories,” she says, “let me in on her secrets.”

“I thought I had dealt with her, and all my issues,” Butler adds. “In those first two years it was almost like a psychodrama with my mother. I was looking at her as an 8-year-old, furious with her. But then hearing her talk about her side of the divorce, I got respect for her and what she’d done and how she done it. It was my baggage, not hers.”

Frozen in Time, then, is a story of loss and redemption with all the ensuing guilt and distress that comes from poking holes in a lifetime story. It is at once deeply personal and deeply universal. Which is precisely Butler’s hope for the project. “The most important thing to me about work was, yes, it was the relationship with my mother,” she says. “But it is more than that. People look at it and relate to their own story. For other people to answer those questions about their own lives is great.”