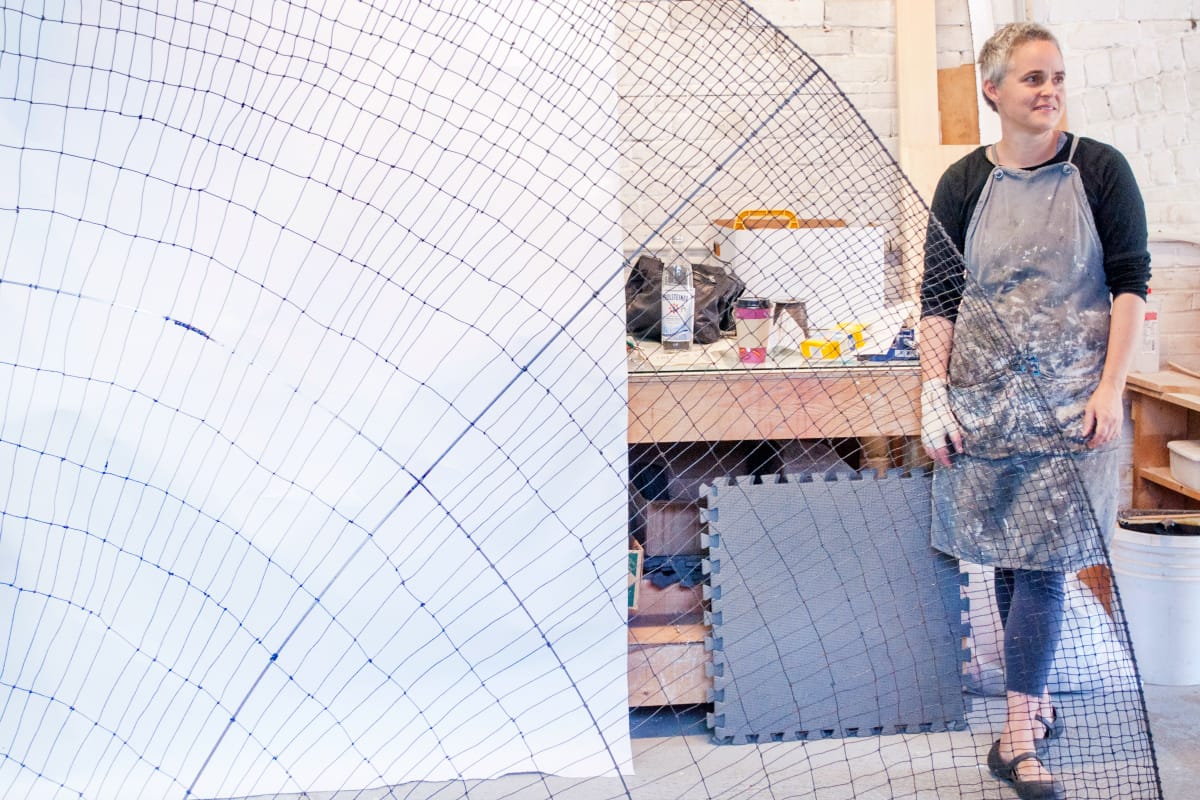 From a remote island off the coast of Maine, sculptor Anna Hepler uses solitude and freedom to build her own private universe.

“In the winter when all the trees are bare, you can see Canada from here,” says Anna Hepler as I stare out on a verdant canopy from the second story of her studio in Eastport, Maine. I can just make out the Atlantic shining through the leaves. Perched on a small island just south of the Canadian border, Eastport is the definition of remote. It’s here that one of Maine’s most acclaimed contemporary artists chose to make her home four years ago, seeking out the solitude and freedom that have fueled her creative activity ever since.

Perhaps best known for her massive inflatable sculptures made from recycled plastic that swell and crumple as if breathing, Hepler constructs pieces that are remarkably diverse yet cohesive. For decades, the same collections of imagery—crystalline lattice structures; biomorphic cellular forms; and concentric, tightly spiraling masses—have preoccupied her work in ceramics, crocheted wire, soft sculpture, collage, etching, and virtually any other medium pulled into her creative orbit. 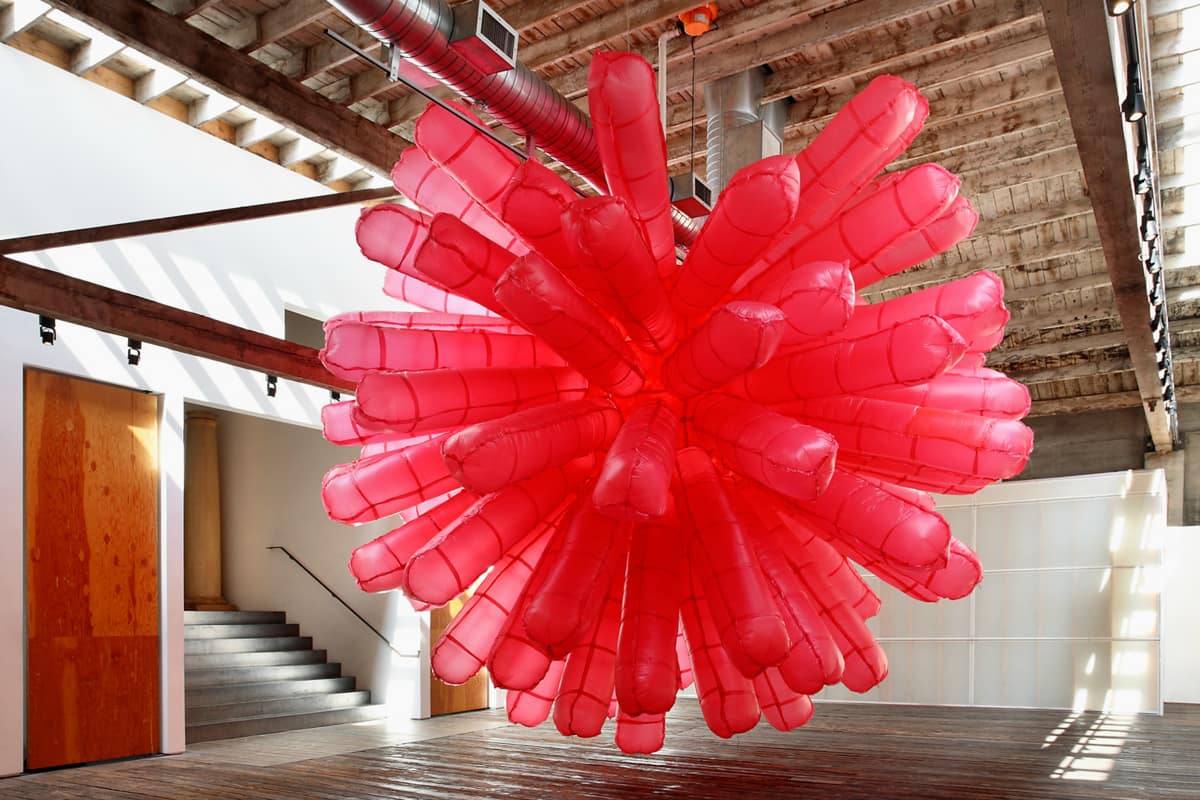 I first meet Hepler at the door of her Eastport studio, left open to the midsummer sea breeze. A 45-year-old with close-cropped silver hair, she bristles with energy. She takes a moment to wash the grit from her hands as I survey her workspace: a two-story, concrete-floored building Hepler and her husband refurbished several months ago. She retained her first studio in town—a raw industrial building tucked behind the storefronts along the city’s sleepy waterfront—as a secondary space, the staging ground for her museum-scale installations.

Books and tools line the walls of her studio, which is charged with the energy of constant activity and fresh ideas. An in-process wire sculpture sits on the floor, a portion of a monumental work that fills an entire gallery as part of the 2015 Portland Museum of Art Biennial. A side room reveals a miniature ceramics studio, where she creates dense clay objects in addition to functional pottery when the mood strikes her. The lofted second floor features flat files and a small printing press—“my little bindery,” as she refers to it fondly. Prototypes and works in progress lay scattered across the various stations, ready to be revisited at a moment’s notice. 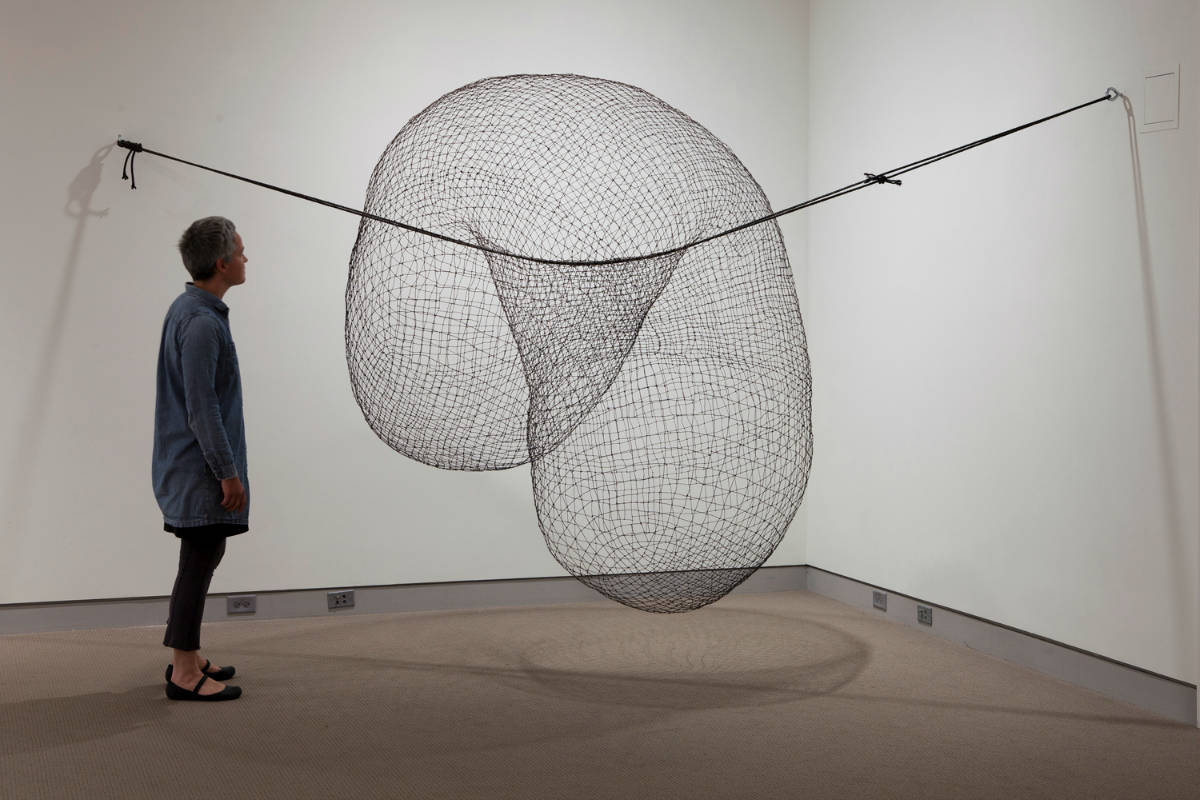 Despite the evidence of intense focus that suffuses Hepler’s workshop, to her it is a place of refuge. “I prefer to be here whenever I can,” she tells me. “I rebuilt this space very much with eyes off the street, not putting windows in the first floor, turning away and only giving myself a place to look out high overhead. It goes back to the small-town problem: you look out and think, ‘Oh, there goes Billy Boon; what are they doing over there?’ You know everybody, especially in the winter. Living here, the hardest thing is getting your head out from under all of that. I feel that I built the studio very consciously as a private, inward space.”

This sense of interiority is a defining characteristic of Hepler’s work. Her creative world is a private universe, a place where recurring shapes and images—her “elemental forms,” as she calls them—seem to evolve and curl into themselves in a state of continual reinvention. For years she has explored this family of forms and motifs, flattening, stretching, and reconfiguring them in the pursuit of some basic core truth.

In Blind Spot, her recent solo exhibition at the University of Maine Museum of Art in Bangor, Hepler filled the gallery with a constellation of objects and images: large-scale woodblock prints and etchings, a selection of sculptures in wood, matte black ceramics, airy wire sculptures, stitched textiles, and crocheted plastic forms that, for all their difference of scale and media, seem to carry the same essential genetic makeup. Faint allusions to organic life, paired with an intense visual restraint, permeate everything she makes. 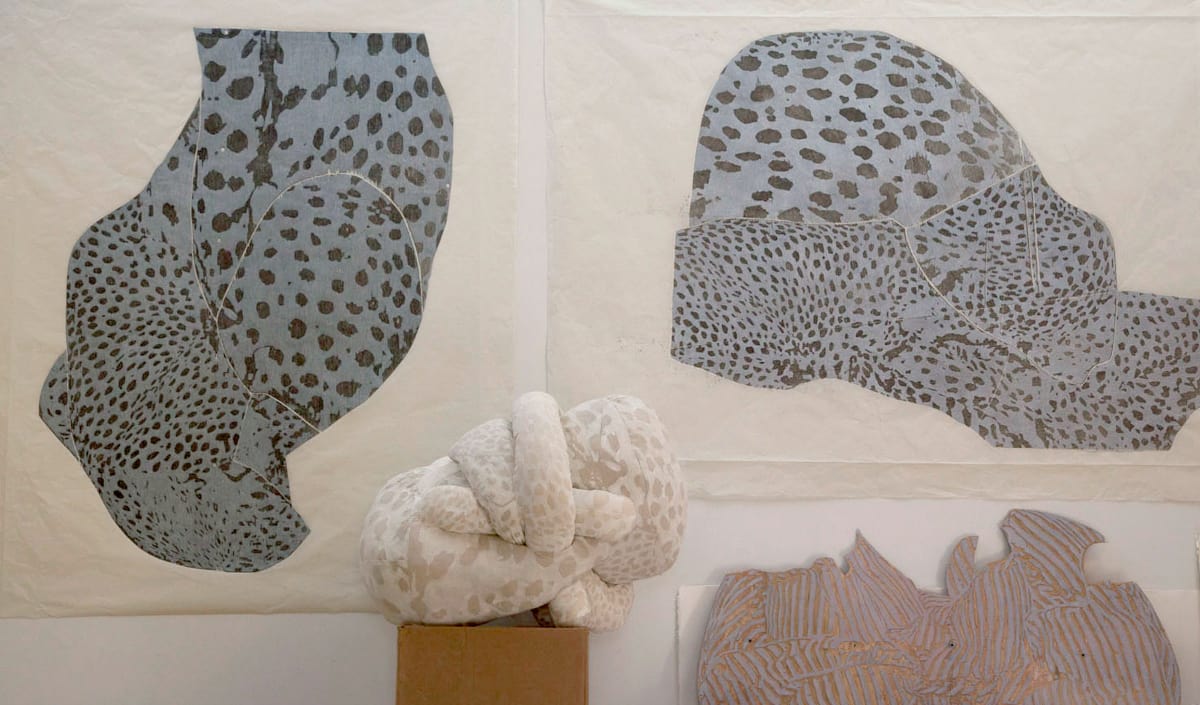 Prints and sculpture from Blind Spot exhibit at University of Maine Museum of Art, photo courtesy of Anna Hepler

The explosion of output found in Blind Spot began with a simple collage. Animal camouflage collected from an issue of National Geographic, cut and layered into biomorphic abstractions, led to abstract prints and sculptures that explore shimmering permutations of creaturely, enigmatic forms, all pattern and volume. The most fascinating work from the series is a sculpture made from wood panels—the original woodblocks from which the prints were made—hinged together into a three-dimensional object, hanging in space like a sort of surreal animal pelt. 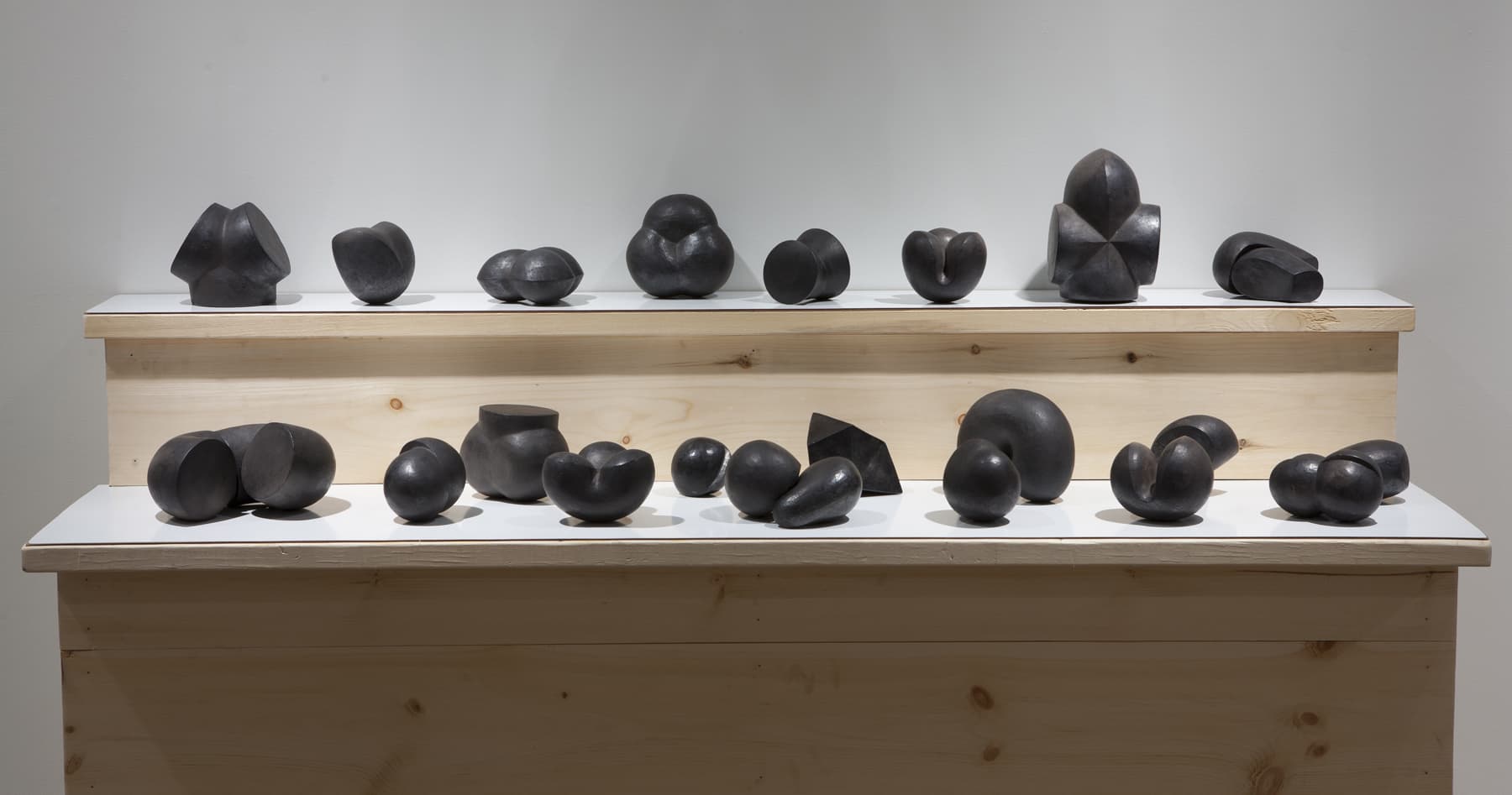 Blind Spot revealed not only Hepler’s ingenuity across media, but also her prolific rate of output. “You can get a lot done here in the winter,” she says. “There’s not much else to do, as you can imagine.” Before her move to Eastport, Hepler was a professor of art at Bowdoin College in Brunswick, where she became a well-known and much-beloved fixture in Maine’s widely dispersed but tight-knit art community.

The decision to give up teaching and the promise of a stable career to devote herself more fully to her craft was difficult, but necessary. “I miss the relationships,” she says, “but I do not miss the teaching at all. Every time I’m put into that position, even as a visiting artist, I feel almost immediately awkward. It seems like such a false pretense for me to have knowledge and to be dispensing it, because the whole thing we do as creative people is try what is unfamiliar and take risks. So the notion of being an authority in your field—and professionalizing the output—I feel like it’s corrupting.”

Hepler is unapologetic about her intuitive approach to her work, and to art in general. Well spoken, incisive, and confident, she nonetheless looks at art making with an air of uncertainty, a kind of risk taking that simply wasn’t tenable within the humdrum of academia. “The institution asks you—needs you—to act with authority in relation to your students,” she says. “So all of the vulnerabilities that are so much the climate of making your best work are held at bay.”

It’s the search for that atmosphere of creative honesty that finally led Hepler and her family to settle in Eastport, following brief stints in places as farflung as California, Rome, Washington State, and South Korea. “When I was living in Korea, everything I made was hot pink,” she confesses with a laugh. “Things get more structural and black and white in New England. I don’t know what happens.” Her husband, Jon Calame, is a freelance nonfiction writer, and their two children, whom they homeschool, have been raised in an environment of flexibility and independence.

For Hepler and her family, the relative isolation of Eastport is both a blessing and a challenge. As we scan her personal library discussing influences, she hugs a favorite hardbound volume to her chest as a sort of thrilled shiver moves through her. “Thank god for publishing! You just can’t see stuff like this up here.” Trips to larger cities like Boston and New York provide a necessary injection of cultural inspiration and are planned months in advance. “My parents-in-law have a place in New York City, and we go there every year,” she says. “For those brief moments when we get into a big city, we’re all just so thirsty for it after being up here. We’re so fresh to any new experience. It’s exciting.”

These rare excursions help feed the long, quiet periods of activity on the island. “Leaving is an important part of being here,” she says. “We all need chances to escape wherever we are.” While the stability, calm, and near anonymity afforded by a life away from the center nourishes her creativity, Hepler is by no means a recluse. On the heels of her massive installation in the Portland biennial, she is planning solo shows in Virginia and Colorado, followed by a residency and an exhibition at the Nova Scotia College of Art and Design in Halifax, the summer of 2016. The school made an indelible mark on art history in the 1970s as a remote but highly influential bastion for conceptual art. It’s that same spirit of seclusion and experimentation that Hepler hopes to tap into during her time there. In many ways, it’s what she first sought in coming north to Eastport.

“Moving up here was in large part a way to know myself, away from all my insecurities,” she says. “I’m the type of person to be concerned about what other people think. But if I can live up here and be alone, away from those voices, I have a better chance at listening to myself. That’s all we can do in our lives anyway, is listen to ourselves.

“We’re all alone with our work, and I think that the more honest we can be with ourselves, the better the quality of what we make. It’s all part of some larger project to answer the question: What would I make alone on a desert island? Not that that’s a realistic context.” She pauses for a moment, mulling over her own quandary. “But I am on an island,” she adds finally, smiling to herself. “I’m getting there.”

Our Shiny Objects will (maybe) make you feel a bit better about spending time with the fam. This week’s list: November 24th-26th.

Not sure what to do this weekend? Don’t fret. Shiny Objects, Take’s curated weekend guide, has top NE picks for November 10th-12th.