Recently, it’s been the cultural trend to rope off the beginning of the year to catch up on all the moments, movies, music, and writings we missed last year. So, once you’ve caught up with Moonlight and/or finally get around to listening to the newest And The Kids album (released summer ’16), consider looking ahead to our Artists to Watch for 2017.

Though we do have favorites of our own, we could not adequately survey the region for artists to watch without consulting a few of our many trusted curators and friends: Abigail Ogilvy, Owner of Abigail Ogilvy Gallery in Boston’s South End; Randi Hopkins, Director of Visual Arts at Boston Center for the Arts; and Ian Alden Russell, Curator at Brown University’s David Winton Bell Gallery.

All of these artists sculpt, paint, record, and perform works worth following, especially considering our current social and political climate. Since we’ve recently been reminded that we cannot rely on the centralized leadership of our democracy to defend our integrity as human beings, or the integrity of thought through the defense of facts and mutual respect, we look to artists like these as our true cultural gatekeepers. The artists on our list are people we can trust to use bold expression, tenderness, and knowing imagery to question the status quo. Sometimes they hold up a mirror to our culture. Other times, they hold up a loudspeaker or a puppet mask, a paintbrush, a bouncy ball, or a digital camera.

These cathartic, sarcastic, pointed, paradoxical, and, most of all, inimitable artists are who we’re watching in 2017. 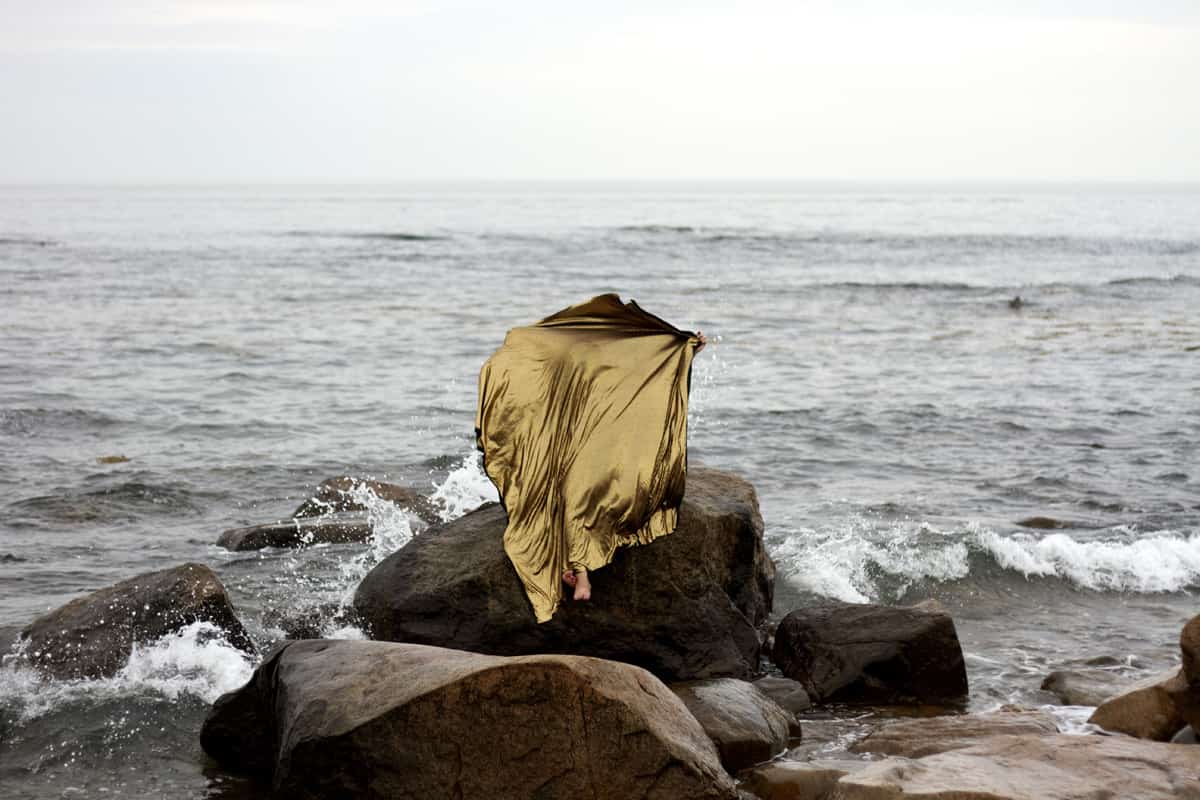 Using photography, performance, and video, Boston-based artist Nabeela Vega creates immersive works that examine elements of our individual experiences of the social world as it intersects with identity, personal politics, and queerness. Oftentimes, the work calls into question our taken-for-granted notions about bodies, media, and gender. As Hopkins points out, “Vega’s rich exploration of the contemporary presence and experience of the Muslim femme takes forms that are performative, collaborative, generous, vulnerable, and exquisitely beautiful. The artist takes risks with their own body to think about our greater body as citizens and humans, work that feels vital and particularly brave today.”

“This month sees the premiere of the entirety of Tanja Hollander‘s Are you really my friend? at MASS MoCA, the Maine-based photographer’s epic endeavor to photograph all 626 of her Facebook friends,” says Russell. “Bringing her across the nation and around the globe, the work probes the issue of friendship and connection in our digitally mediated age. Questioning the boundaries between personal, public, and online life, the project presents us with intimate portraits she took of the personal spaces and environments of the people she is connected to via social media.” 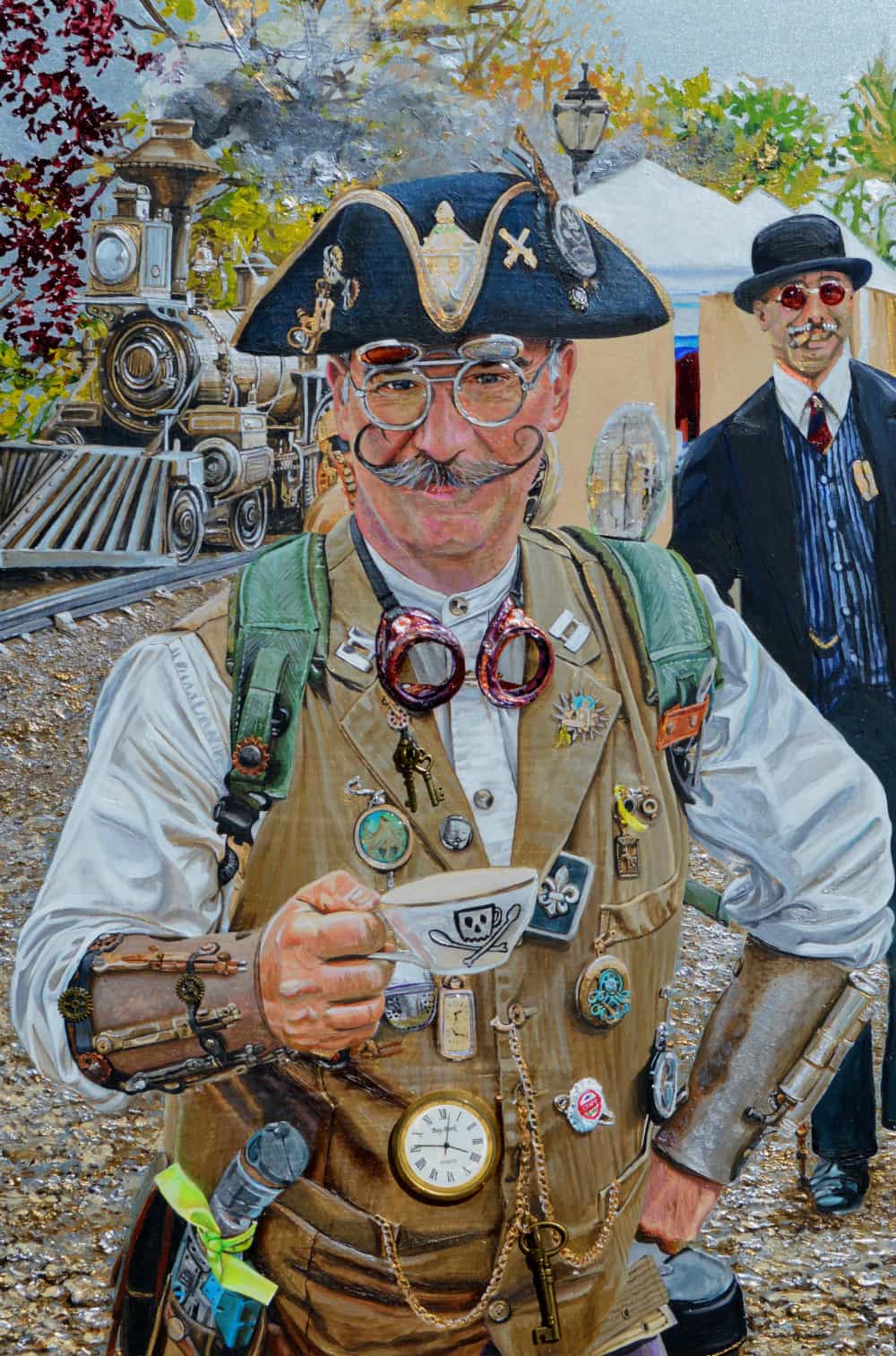 “Wild’s striking, cinematic paintings transform the tradition of figure and portraiture to achieve a contemporary understanding of the human condition,” says Ogilvy. “In her most recent series, Steampunk, Wild references photographs she took of real people at a steampunk festivals. In 2016 she was a recipient of the Fay Chandler Emerging Artist Award in Boston, MA.”

“Originally from Cologne, Germany, Kai Franz makes sculptures and drawings that confront and complicate the relationships between process and artifact,” says Russell. “Testing and questioning the potential of computer-aided design while appearing as formal aesthetic statements in their own rights, Franz’s works and projects are strong examples of the tradition of critically and technologically-engaged art making in Providence.” 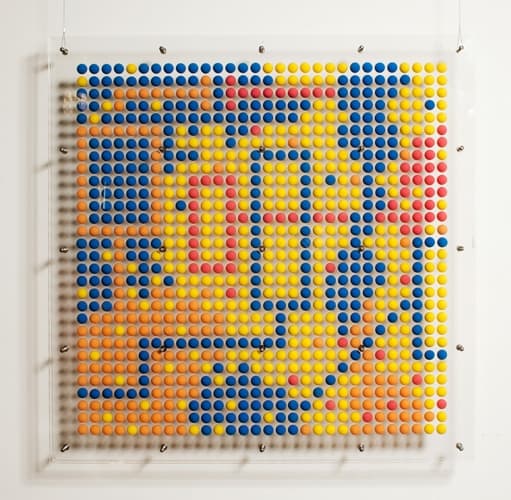 Atlanta, Georgia transplant turned Southern Vermonter mutsu crispin (aka John DiGeorge) is a performance artist, filmmaker and. . .bouncy-ball sculptor? Last year, DiGeorge found a way to make those familiar, seemingly childish forms simultaneously fun and subversive. We’re sure we can find some comfort in these delightfully bright pieces as the year turns potentially darker. “. . . the balls float forward and back within their designs or wanderings, rhyming with their cast shadows, ghostly glows, nearby hardware and reflections,” says the artist. “These dear objects from our childhood are animated and transmogrified, speaking in a chorus at once lighthearted, humorous, mysterious, and ecstatic. 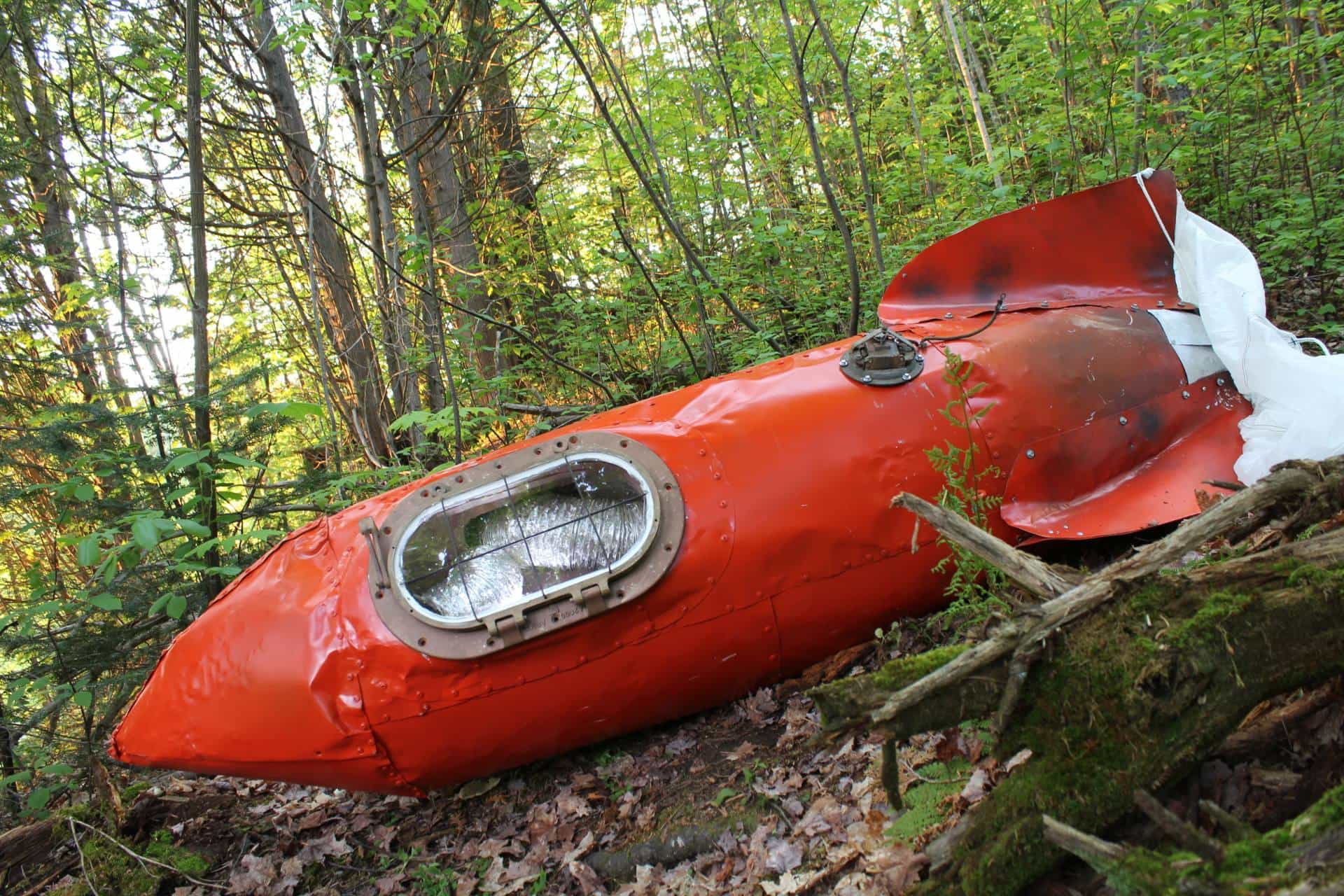 “Neckers’ Portals hidden in forests, a rocket in a tree, a parachute caught in branches—Matt Neckers’ installations interrupt the serenity of the woods,” says Russell. “Fascinated by the impact of mechanization on our imagination, Neckers opens up earnest, generous, and sustained conversations about the world we inhabit, the others that may exist, and the precarious journeys between.”

Wilkerson is one of Hartford’s many young Renaissance Men. His list of current projects is too long to add here; suffice it to say that Wilkerson, at age 25, is an uber-accomplished dancer, film artist, activist, artistic director, and overall creative mastermind. In the words of our dear friends at Breakfast, Lunch, and Dinner, “He’s too black, too vocal, and too flagrant. He’s also one of the few indispensable figures in Hartford’s ever-continuous push to art and cultural prominence. Say hello to the city’s new brash monarch.” 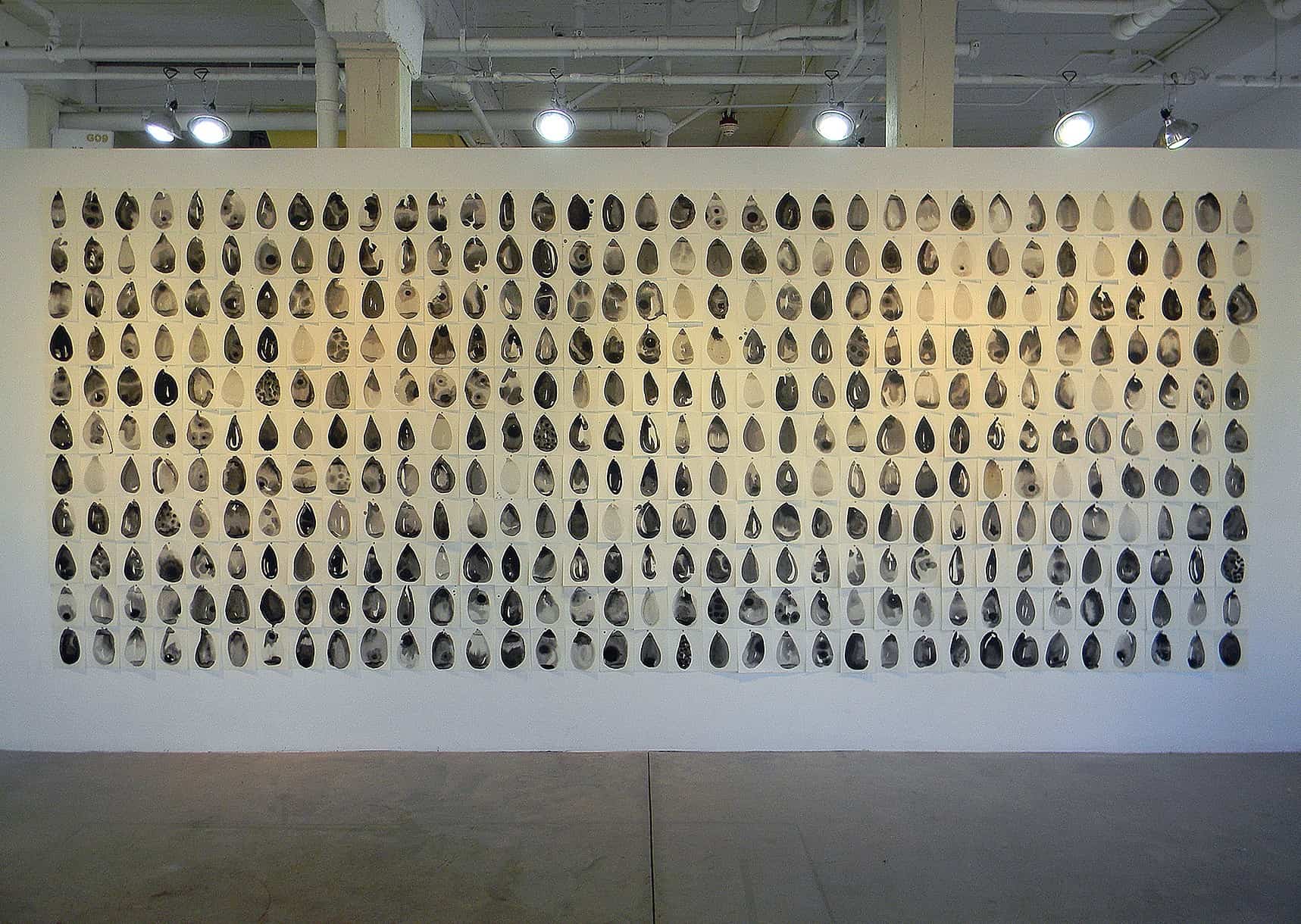 “Toby Sisson‘s encaustic paintings and drawings rigorously explore the metaphoric potential of abstract form,” points out Russell. “Often contrasting shades of black with shades of white, Sisson’s works are informed by personal narrative and her mixed race heritage. Her images and forms offer open-ended prompts for poetic reflection on the assumed oppositions and conflicts with which we struggle—personally, emotionally, and socially.” 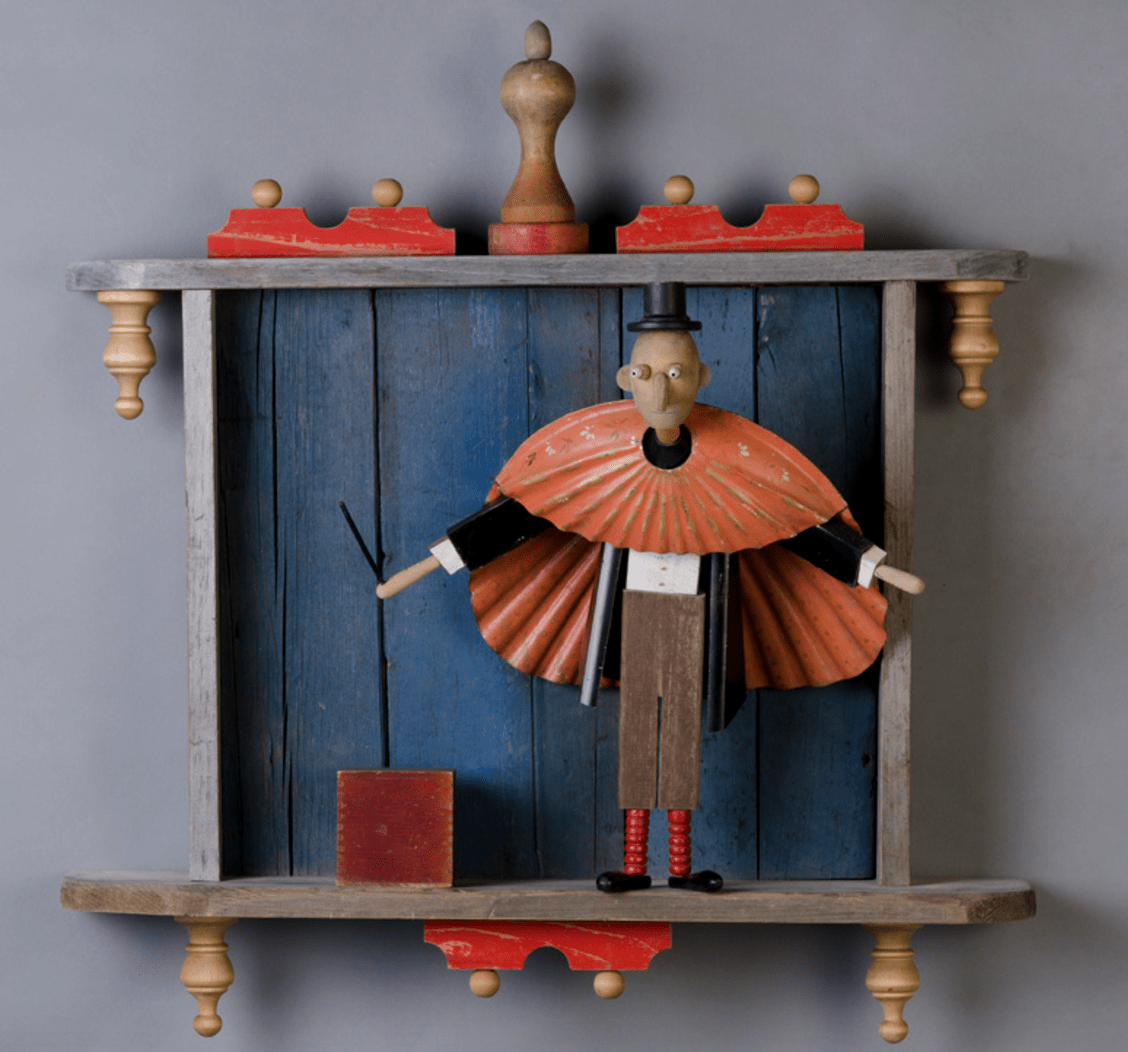 “His multimedia sculptures assemble found objects into playfully illustrated characters,” says Ogilvy, “each with a unique personality. His choice of material imparts a sense of nostalgia and memory, imaginatively re-purposing everyday objects that accompany us throughout our lives.” 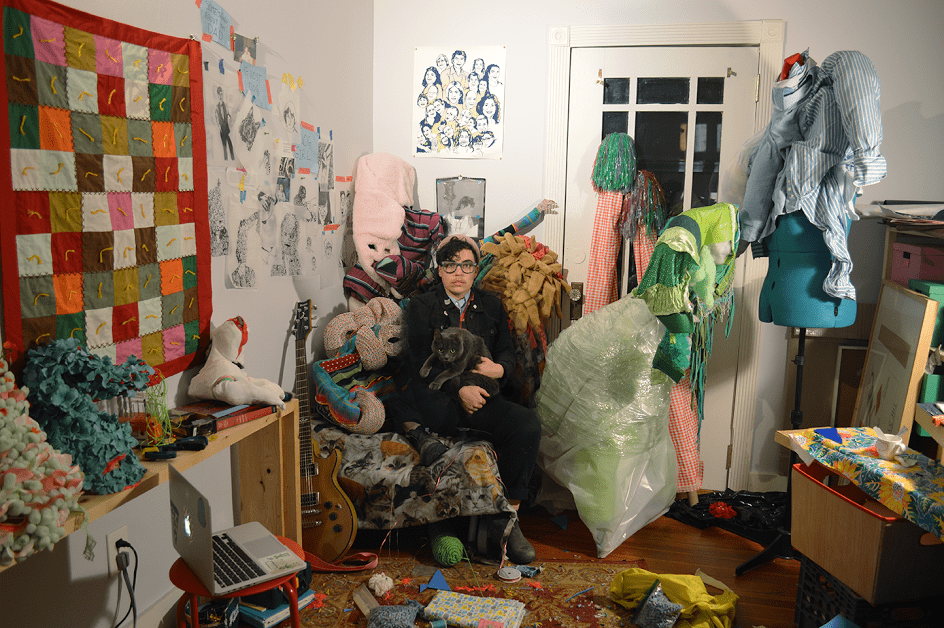 J.R. Uretsky and Scott the cat | Photo courtesy the artist

If you read Take, you already know we’ve had a crush on J.R.’s awkwardly signature brand of brave, big-feeling, truth-telling performance for a long time. Yet it’s not only her magically strange, emo-queer performances to watch out for in 2017. Specifically, it’s J.R.’s puppets that will lend you space to emote and bring us all solace as 2017’s social and political climate sags and twists. “The characters that emerge through her performances are relatable yet also alien and non-specific,” says Hopkins, “forging an ambiguous space where emotion is the remaining constant.” 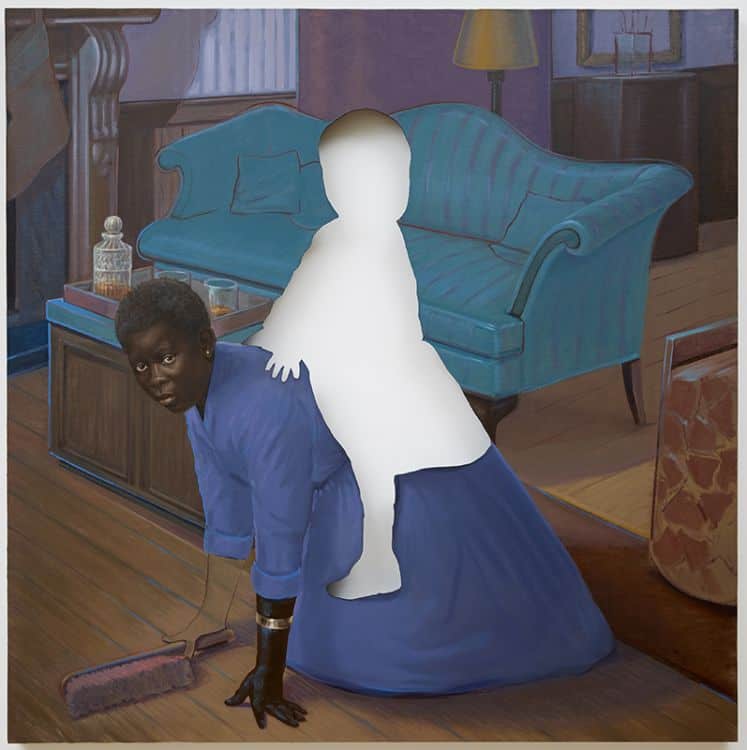 Kaphar creates new histories with each work he paints and sculpts. It’s through his careful reinterpretation of the past, mixed with artful exclusion and deconstruction of specific images that makes his work powerful, “In my work I explore the materiality of reconstructive history. I paint and I sculpt, often borrowing from the historical canon, and then alter the work in some way.” says Kaphar “I cut, crumple, shroud, shred, stitch, tar, twist, bind, erase, break, tear, and turn the paintings and sculptures I create, reconfiguring them into works that nod to hidden narratives and begin to reveal unspoken truths about the nature of history.” 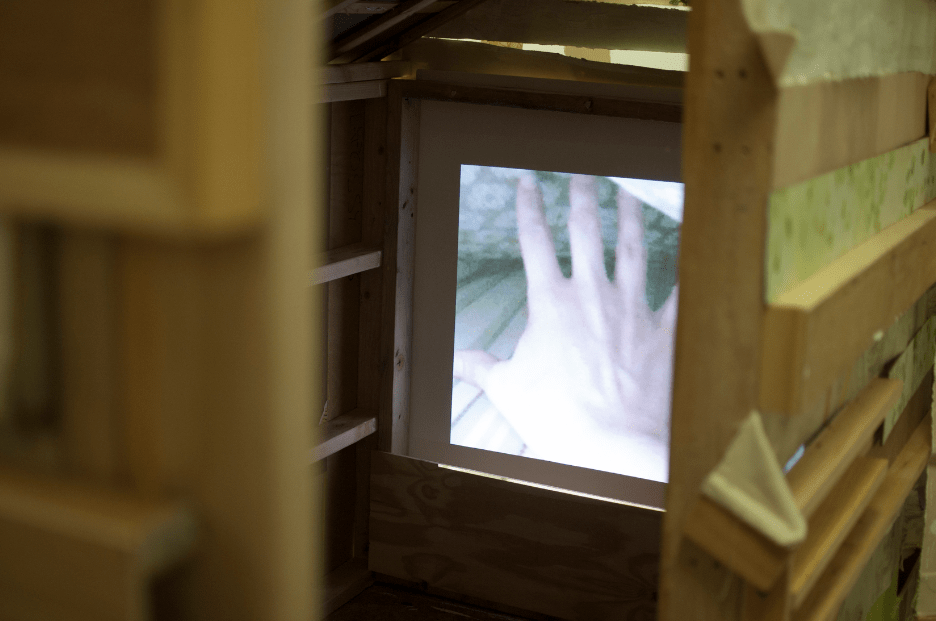 Inside shot of Love Shack instillation featuring video loop of “Waking Up And Getting Up Has Never Been Easy”, instillation and video by Coe Lapossy | Photo courtesy the artist’s website

Ever wonder what it’d be like to wake up in a super-cozy, literally endless bed? Well, Lapossy has theorized it, and has many more other immersive, speculative works ready for the upcoming year. “Lapossy brings feminist sass and romantic charm to smart sculptural and installation work,” says Hopkins. “Pop culture seeps into her artistic vocabulary with ease, for example weaving 20th-century art history together with early 90s romantic-fantasy film in a setting that evokes the vaudeville vibe of the magician’s trick.”