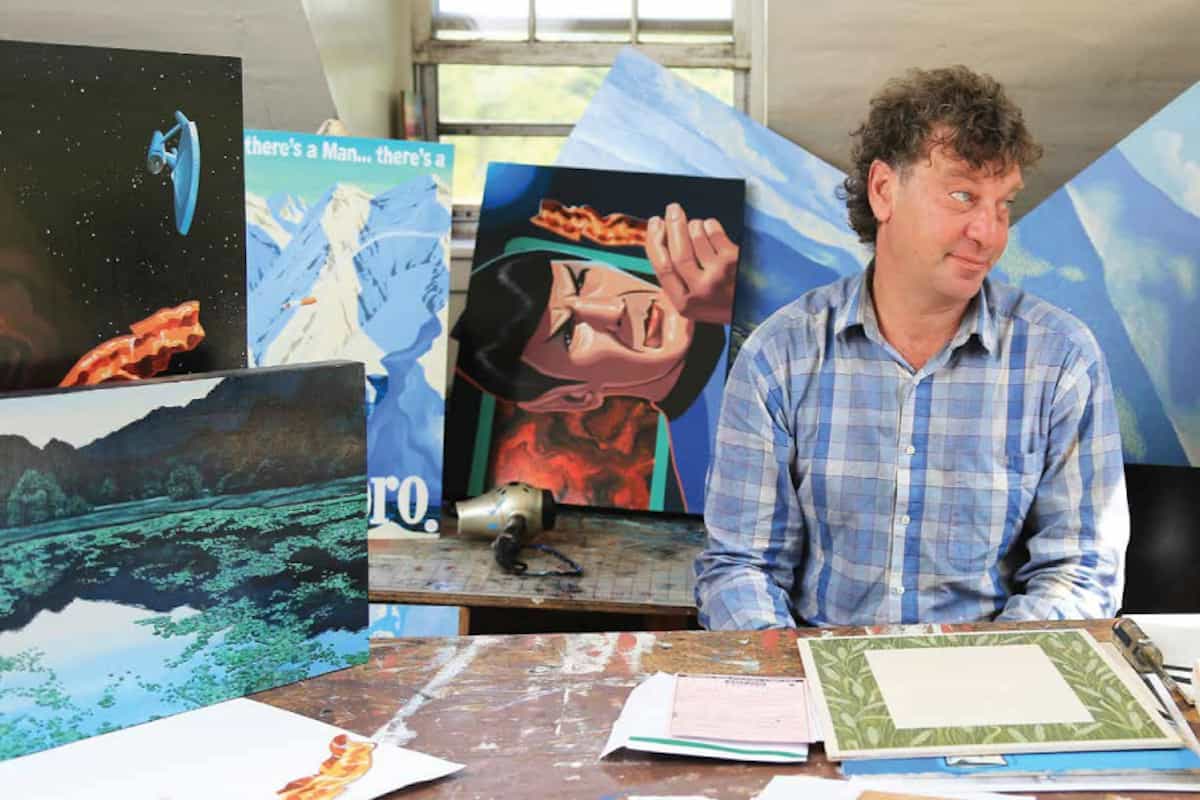 Accessible artist extraordinaire Jesse Azarian brings a dose of nicotine and pop culture to his many, many paintings. 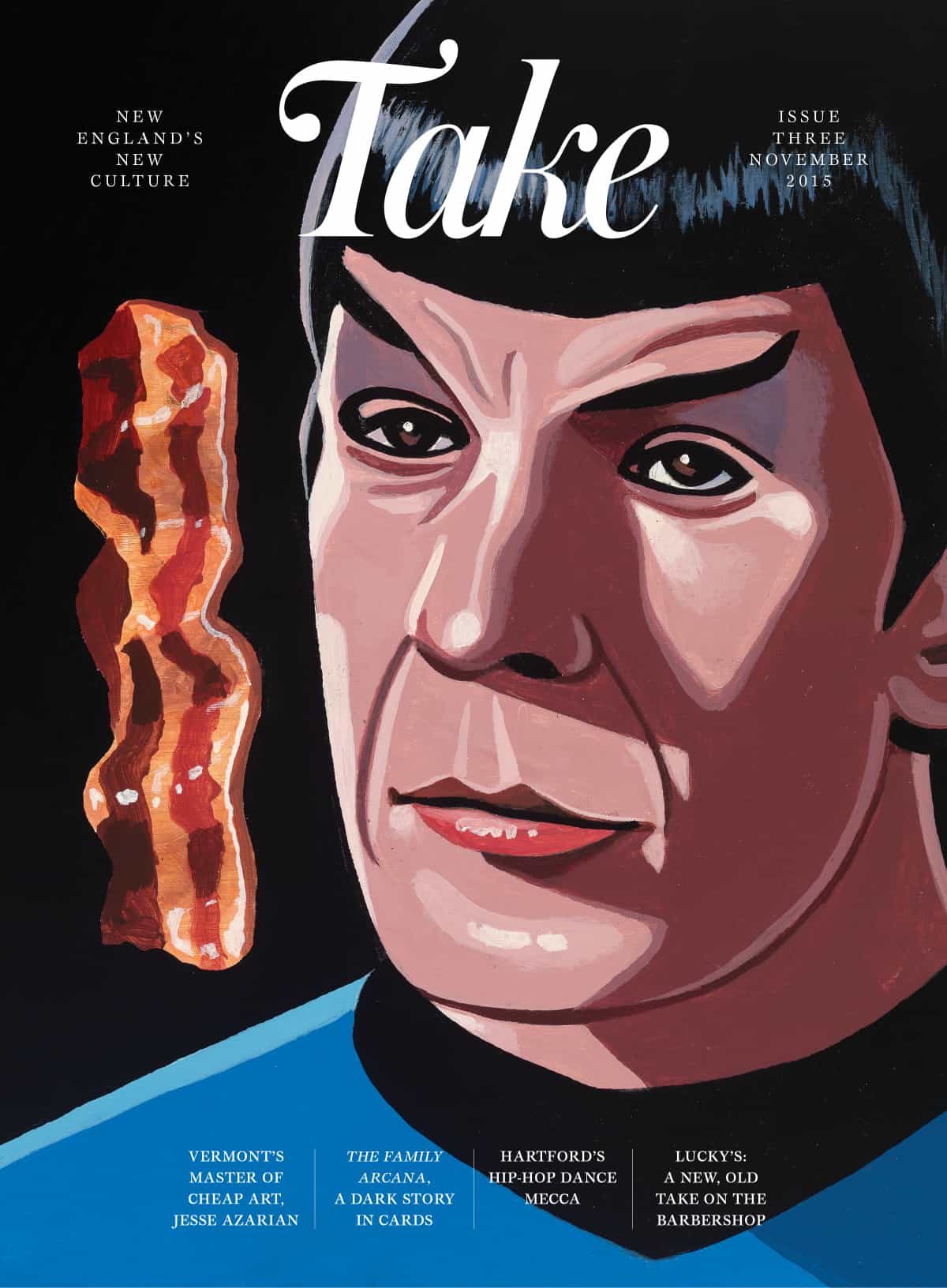 Jesse Azarian has led an unconventional life—right from the beginning. He was born in 1967 on the front lawn of his parents’ home in a small town in central Vermont.

Azarian grew up to be a prolific painter with a cartoony, seemingly naive style and a devotion to the cheap-art ethic. He prices his smallish acrylics on wood in the $10 to $75 range, although “some are more expensive,” he cautions—meaning they can be had for as much as $100. “I hate the whole idea of galleries,” the tall, slender, blue-eyed artist says in an interview at Wilaiwan’s Kitchen in Montpelier, Vermont. “They take too much money, and the whole scene just isn’t for me.” 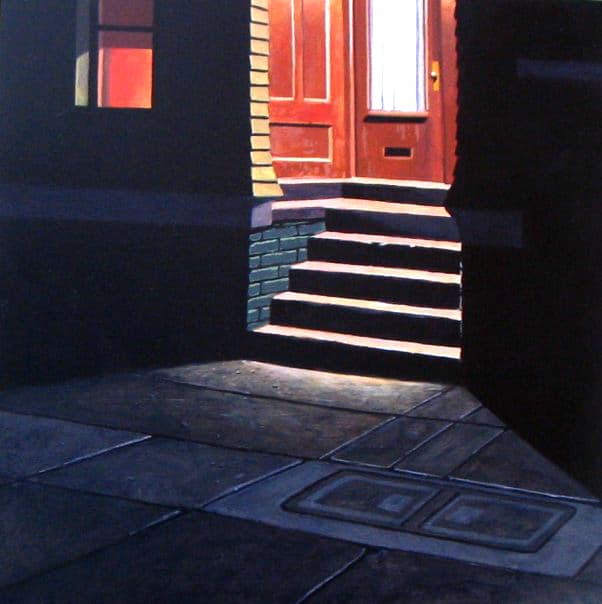 Azarian paintings like this one hang in the Farmer’s Daughter Hotel in Los Angeles and guests sometimes steal them.

The popular 20-seat Thai restaurant on State Street, a short distance from the Vermont capitol, is co-owned by Wilaiwan Phonjan and her husband, Tim Azarian, one of Jesse’s two brothers. The walls are covered with Jesse’s unframed paintings of pop culture icons like Elvis Presley (wearing shades and a white cap) and Mr. Spock. The crammed and colorful display also includes winter landscapes, travel posters, a few minimalist abstractions, and several close-ups of food items—especially bacon, which is often shown floating in outer space or being scrutinized by a studious Spock. Azarian is big on bacon. “I’ve always liked bacon a lot,” he explains with his characteristic deadpan expression.

Wilaiwan’s Kitchen and a few other restaurants that occasionally host his work are the only Vermont venues where Azarian shows. Some of the customers who crowd the funky Montpelier ethnic eatery, which is open only for lunch, respond enthusiastically to Azarian’s jokey pieces, Phonjan tells a visitor. “‘Oooh, wow!’ some of them say,” she reports. “But most just look at Jesse’s work and walk away.”

At Azarian’s other permanent showcase—the Farmer’s Daughter Hotel in the Fairfax District of Los Angeles—guests sometimes walk away with his work. Even though the three or four originals hanging in each of the boutique hotel’s 66 rooms cost a lot less than an overnight stay, “people steal them once in a while,” Azarian says with a smirk.

The hundreds of paintings in the hotel, including a series based on Jack and the Beanstalk, are mostly similar to what’s on the walls of Wilaiwan’s Kitchen, Farmer’s Daughter co-owner Ellen Picataggio says. “There are a lot of animals, farm objects, and bacon.” Other Azarian artworks, some of which are his alterations of old paintings picked up at the Rose Bowl Flea Market in Pasadena, enliven the Saint Martha Restaurant [closed fall 2105 – Ed.], which Picataggio and her husband, Peter, also own in another part of LA.

“Jesse just cranks it out,” marvels Picataggio, who’s known Azarian for 25 years. “It can take people a while to appreciate his style. It looks almost naive at first, but you come to see that he’s actually quite skillful.”

It did take some time for Azarian’s employers at the WeBeBop clothing store in the Bay Area to recognize his visual talents. He initially worked there in a back room after moving to California from Vermont in 1990. Once WeBeBop’s bosses discovered his artistry, they had him design displays, labels, and patterns for dresses, Azarian recounts. “It was a good gig until the business got sold in 2007,” he says. “The new owners decided they didn’t need an artist around.” 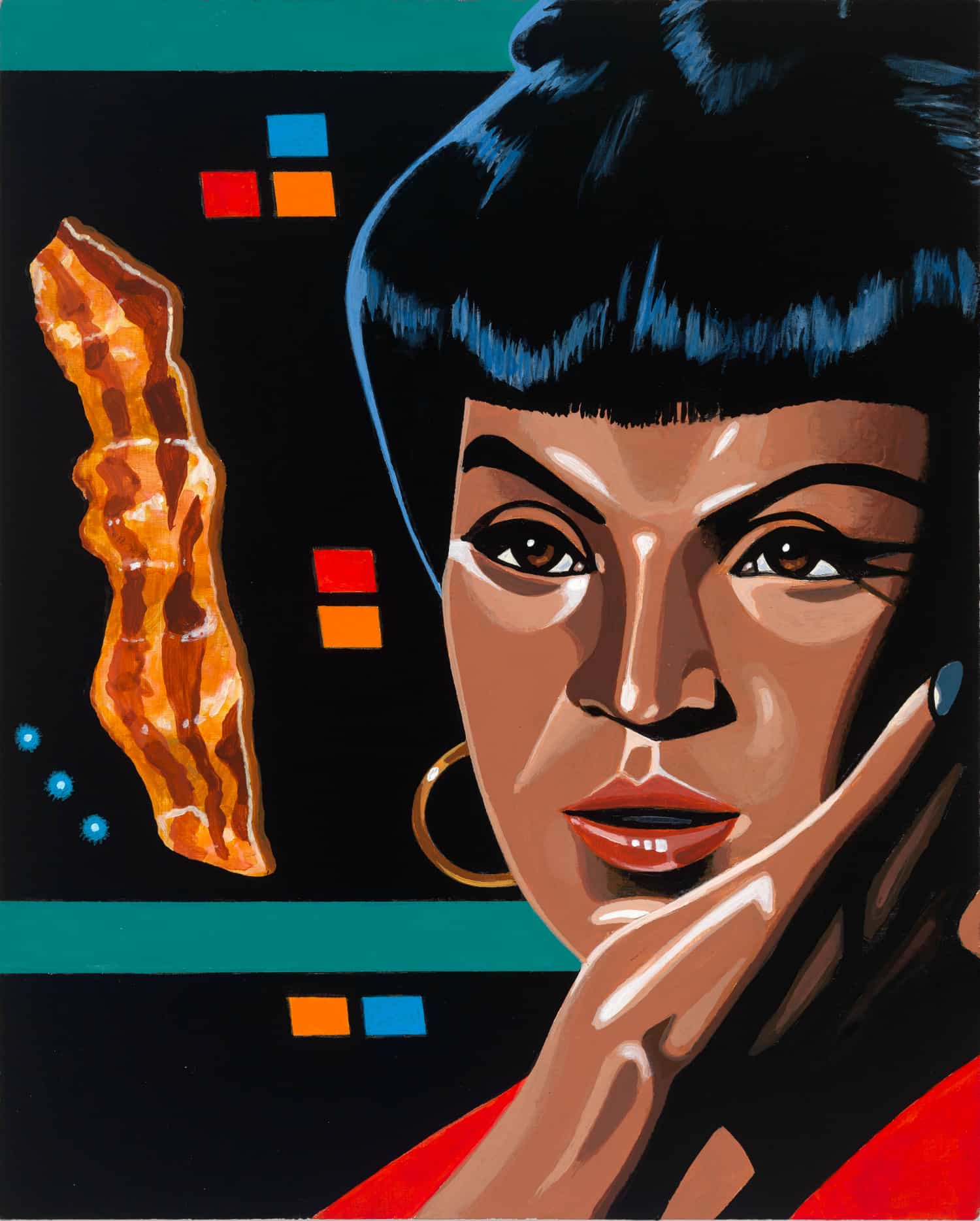 Azarian calculates that “there are enough Star Trek nuts out there” to make up a following for at least that subset of his oeuvre.

Azarian did odd jobs and some painting in California for two more years before returning to Vermont. He now lives in Calais (pronounced “callous”) in a home that he shares with Phonjan, Tim Azarian, and the couple’s three children. When he isn’t painting, he says, “I try to do as little as possible.” Azarian doesn’t appear to be joking. He may well be on the far end of the underachiever spectrum, and he’s also awkward in conversation—at least with a reporter. It’s obvious that he’s not accustomed to being interviewed.

And he’s definitely not motivated to work hard for the money. “I get by on my sales—barely. Which is fine with me,” Azarian quickly adds. With his pieces priced so low, he would have to sell at least 1,000 a year to make what most Americans would regard as a middle-class income.

It’s not as though Azarian is oblivious or indifferent to the predilections of the market. He paints from images he finds in books or on the Internet—never from life—and with an eye to what will likely appeal to a certain base of potential buyers. Azarian calculates that “there are enough Star Trek nuts out there” to make up a following for at least that subset of his oeuvre. “Young people like my stuff too,” he adds.

Some of his non-Trekkie pieces move well when browsers get a look at them. “People were going wild over Jesse’s work at a cheap-art fair [recently held in LA],” Picataggio says. Azarian sold so many pieces that his take for the day amounted to a whopping $800.

The commitment to making art affordable to almost anyone took on a semi-institutional form when Azarian was a young teenager. In 1979 Peter Schumann, founder of the Bread and Puppet political pageantry troupe in Vermont, had started to sell small paintings on cardboard and newspaper from an old school bus that transported his merry band to performance venues in the Green Mountain State and beyond. Pricing paintings from 10¢ to $10 constituted a statement of opposition to the avarice of the established art world. “Art is Not Business!” Schumann proclaims on the Bread and Puppet website. “Art Is Food! Art Soothes Pain! Art Wakes Up Sleepers! Art Is Cheap! Hurrah!”

Azarian became closely acquainted with this aesthetic and political philosophy through his 40-year friendship with Schumann’s son, Max. Their artsy families lived a few miles from each other in rural Vermont. 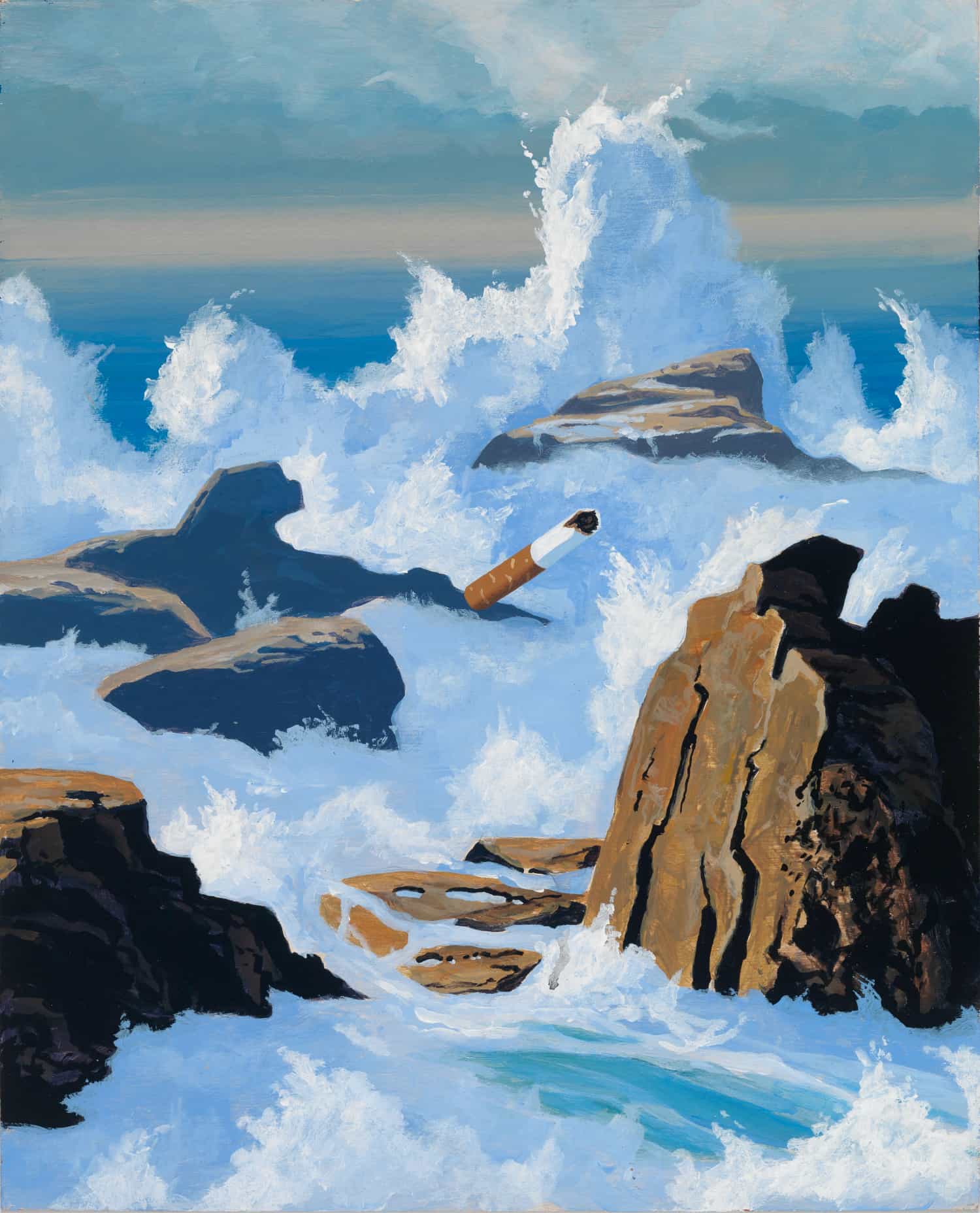 Azarian is devoted to the principles of making art for the masses and satirizing the chic elite.

Max Schumann, 51, ensured that his father’s cheap-art credo would cross over the generational divide. Now the executive director of Printed Matter, a nonprofit artist’s books outlet in Manhattan’s Chelsea neighborhood, the younger Schumann has shown his own work in clubs and bars on the Lower East Side. He also had a show at a Chelsea gallery in 2005 that was favorably reviewed by the New York Times.

The dozen pieces on display were priced in ascending increments of $100, with the last in the series going for $1,200. “The point, of course, is that there was no discernible correlation between the rise in market value and an increase in quality,” wrote Times critic Holland Cotter in his review of the show. “You could buy a dirt-cheap Max Schumann or a relatively pricey Max Schumann and still have more or less the same Max Schumann. The paradox is especially apparent when paintings of identical images are differently priced.”

In addition to their shared allegiance to the principles of making art for the masses and satirizing the chic elite, Azarian and Schumann were bandmates in a punk group called the Hollywood Indians. They played numerous gigs in the 1980s at clubs in Burlington, Vermont’s only sizable city. On a couple of occasions, Azarian notes, the Hollywood Indians were on the same bill as Phish—“before they became famous,” he points out. 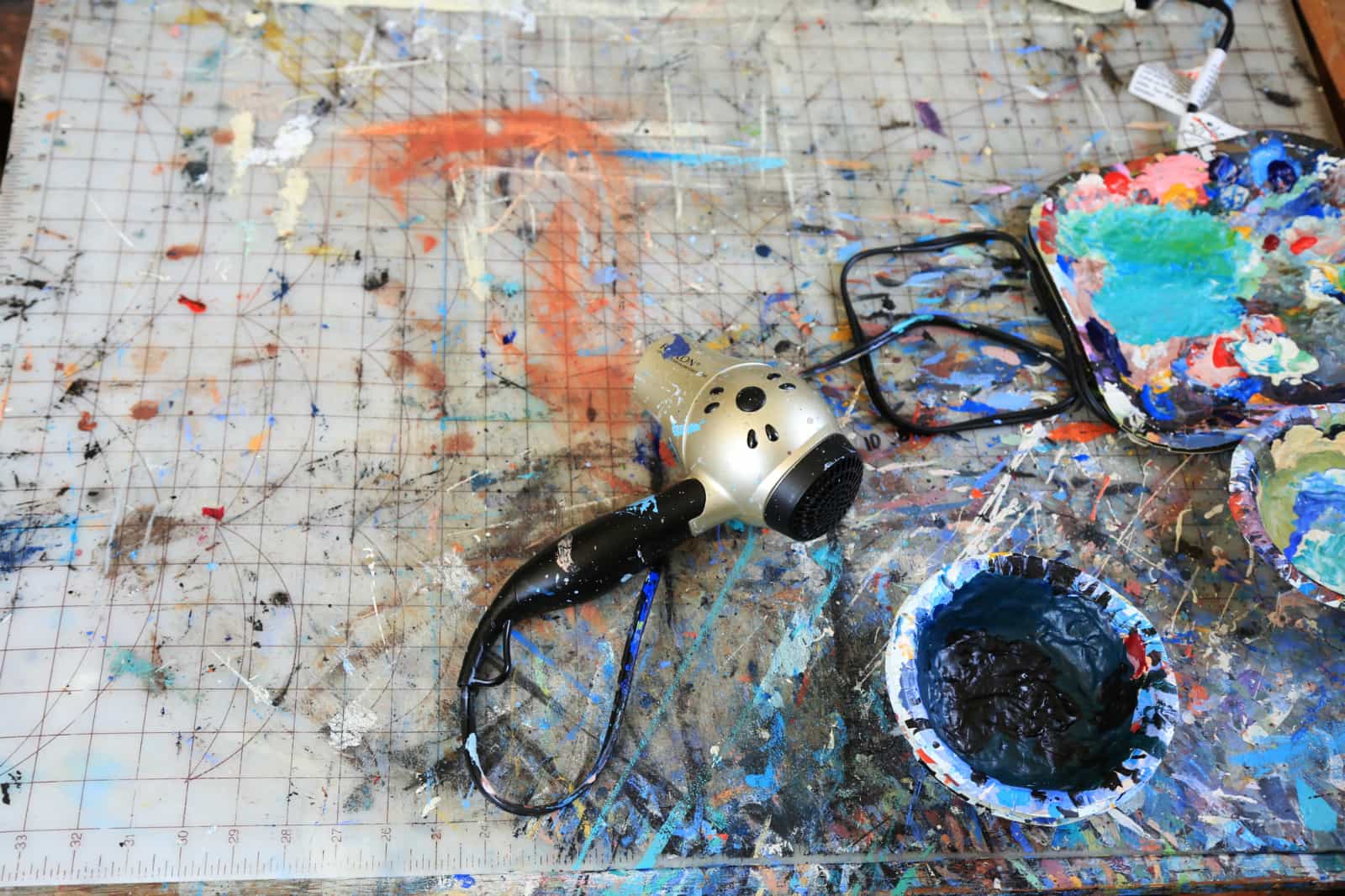 His friend is preternaturally gifted, Schumann observes. Azarian not only taught himself to paint, but he also learned to play drums and other instruments solely by listening to others, Schumann recounts. “He’s a super-talented draftsman, and he’s got an incredible ear,” the musician-artist-gallerist says.

As a child, Azarian lived in a household filled with musical instruments and art materials. His 78-year-old father, known as Tom Banjo, is a folk and country songwriter/performer who has played in several states and alongside some big names, but has never pursued commercial success. Azarian appears to have inherited his father’s indifference toward the fame and fortune an outsized talent can bring. And his mother, Mary Azarian, happens to be one of Vermont’s most beloved visual artists.

Mary, who has illustrated over 50 books, is best known for a series of woodcuts in which each letter of the alphabet introduces a scene of traditional Vermont farm life. An apple-picking vignette accompanies the letter A, for example, while a barn is used as an illustration for B and a cow is used for C. Mary originally designed the panels as decoration for the one-room Vermont schoolhouse where she taught. The pieces were subsequently made into prints on a nineteenth-century handpress and were distributed to every public elementary school in the state through a grant from the Vermont Arts Council.

Mary affirms that she didn’t provide art instruction to Jesse; to Tim, a hobbyist painter; or to her oldest child, Ethan, who’s about as well known as Jesse among aficionados of the northern Vermont art scene. The boys did watch as their mother made her woodcuts, and they browsed the art publications lying around the house, Mary says. “They started doing things on their own at a pretty early age,” and in Jesse’s case, she reveals, “I actually learned much more from him than he did from me. I learned to look more closely at what’s around me.” 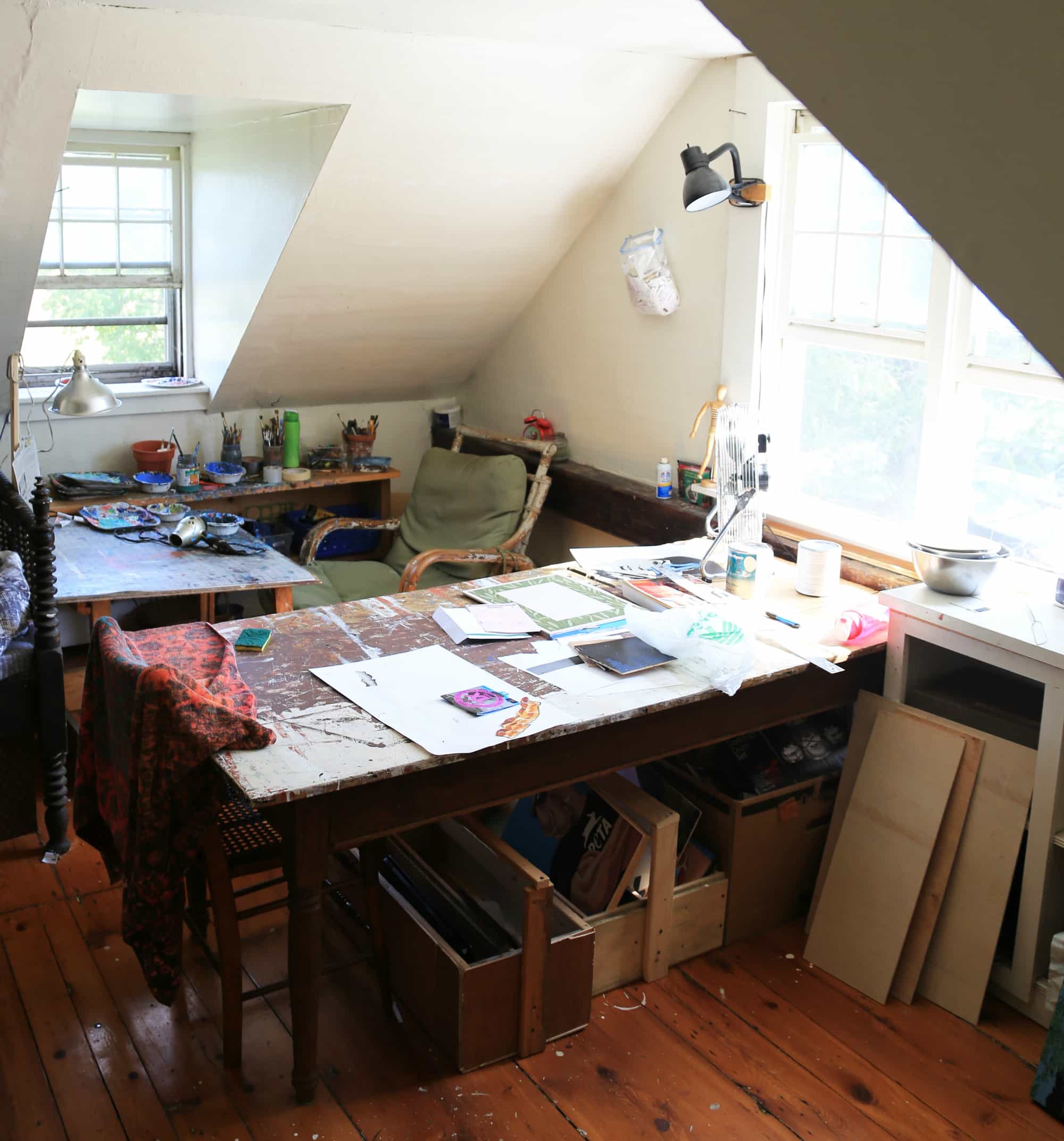 Mary Azarian is applying that lesson to a current painting project: she’s been trying to complete two pieces a week based on what she sees while walking her dog near her home in Plainfield, Vermont. “I managed to get about 80 done over the past year,” she says.

Jesse paints quickly, “but he can be quite meticulous,” his mother notes. “He’s also very skillful.” Mary’s admiration for Jesse’s work doesn’t extend to its marketing dimension, however. She chides him for “selling his stuff for too little.” Mary is also mystified by some examples of Jesse’s subject matter. “Those Star Trek things are incomprehensible to me,” she confesses.

Jesse’s autodidactic approach to art making hasn’t changed as he’s aged. While he acknowledges some familiarity with the pop art movement to which his work has clear affinities, Azarian says he’s never heard of American modernist Arthur Dove, whose spare abstractions might be taken as an inspiration for the few nonrepresentational paintings hanging in Wilaiwan’s Kitchen. That disconnection from the canon results in part from Azarian’s avoidance of museums. “They don’t really interest me,” he says.

His laid-back lifestyle might exasperate some admirers of Azarian’s art. It’s easy to incline toward the view that he’s not fulfilling his abundant potential. Schumann hints at such an assessment, saying, “Jesse is really undisciplined.” But then he adds, “Jesse is who he is and that’s enough. He’s doing what a lot of people probably wish they could do.” 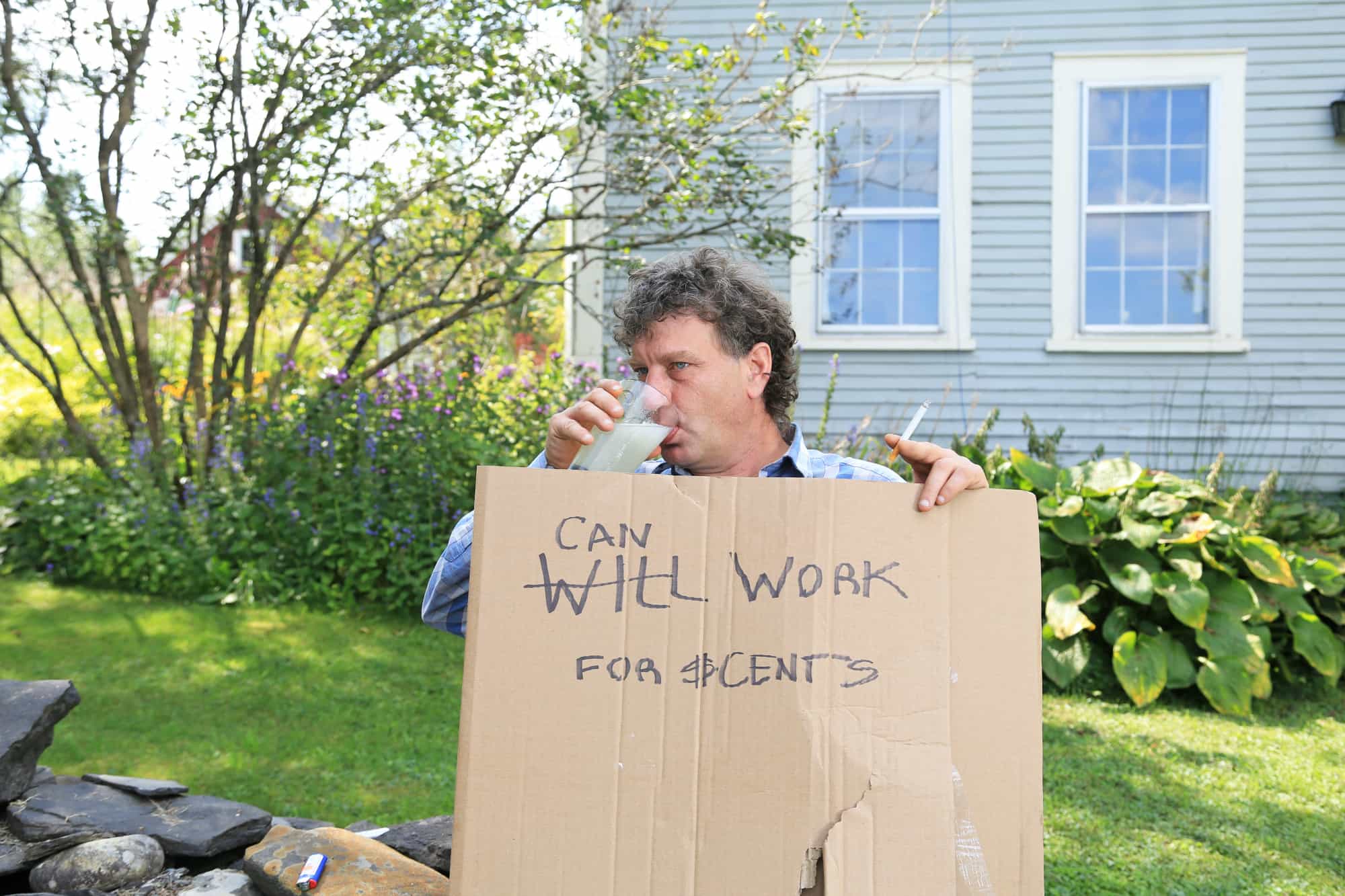 All photos by Izzy Berdan