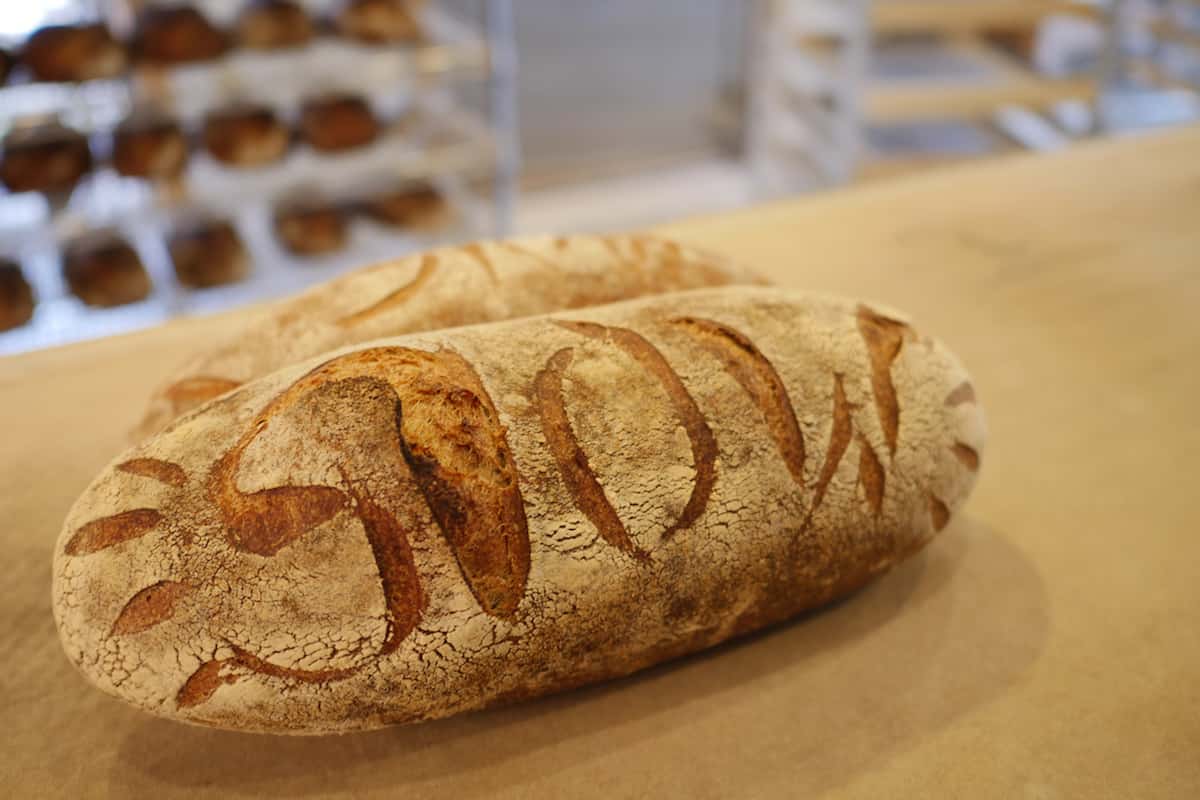 Vermont bakers work with farmers to put locally grown grain into their loaves, creating some of the tastiest nearby breads.

Sitting on the dam at Mount Marcy in the Adirondacks, I took some bread from my backpack and started to eat lunch. Chickadees were gathering all around the iced-over snow, snacking on other skiers’ crumbs, but I knew I couldn’t give my bread up. The flavor of fresh flour—bright as the white snow around me, and lightly nutty—was too good to share.

I had packed a loaf from Wide Awake, a bakery outside of Ithaca, New York, that uses Farmer Ground Flour, stone-ground from organically grown New York State grains. The team behind Farmer Ground Flour is part of an engaging group of farmers, bakers, and other entrepreneurs who are reviving regional grain production in the Northeast.

Vermont, with its DIY, sustainable farming culture extending from the state’s back-to-the-land history, is home to lots of grain revival efforts. Two of my favorites are the Red Hen Baking Company and Elmore Mountain Bread. Both bakeries are starting from the same place: handmade, hearth-baked loaves from grains grown close to home. 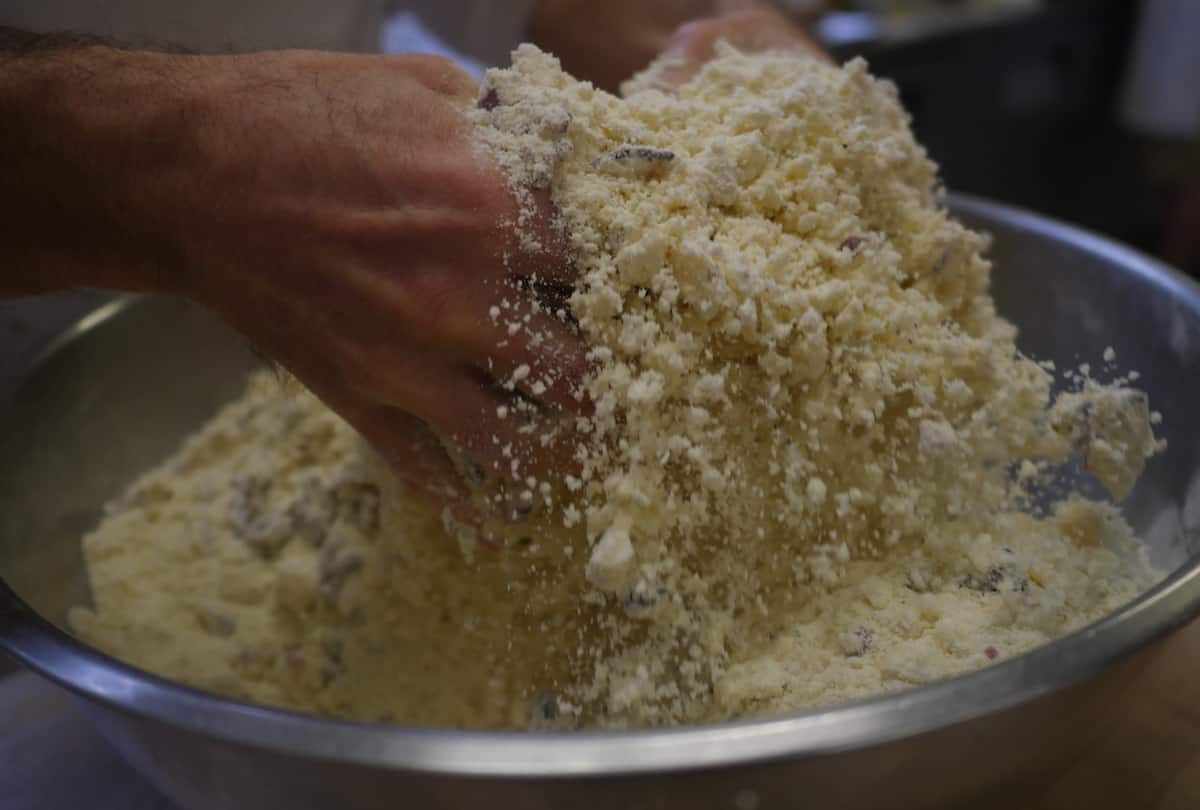 These loaves reflect the long human investment in grains and leavened bread. Industrialization allowed us to abbreviate the baking process, but bakeries like Red Hen are allowing dough to take all the time it needs to develop flavors and textures. Bread starts at least the day before baking, while loaves made with natural starters take longer still.

Randy George started Red Hen 16 years ago with his wife, Liza. Flour is just one of the ingredients they wanted to source nearby.

“I’m intrigued with where food comes from, as an individual, as a baker, and as a business owner. It makes me feel better if I know what I’m supporting,” says George, a gregarious fellow who often wears a biking cap in the kitchen. He always has a smile, lending the business an air of friendliness and fun. The bakery and café are in Middlesex, just off Interstate 89, but also in the middle of one of Vermont’s beautiful nowheres.

The process of building up a local supply has been an evolution, according to George. He couldn’t just shop from a distributor’s list; he had to help create supply with growers and coordinate with them about farming and milling styles. Red Hen sources 90 percent of its flour from within a 150-mile radius of the bakery. In farm-to-table metrics, that means that about 4 acres of grain a week make their way into 12,000 pounds of bread. For local flour, it’s the lunar landing. 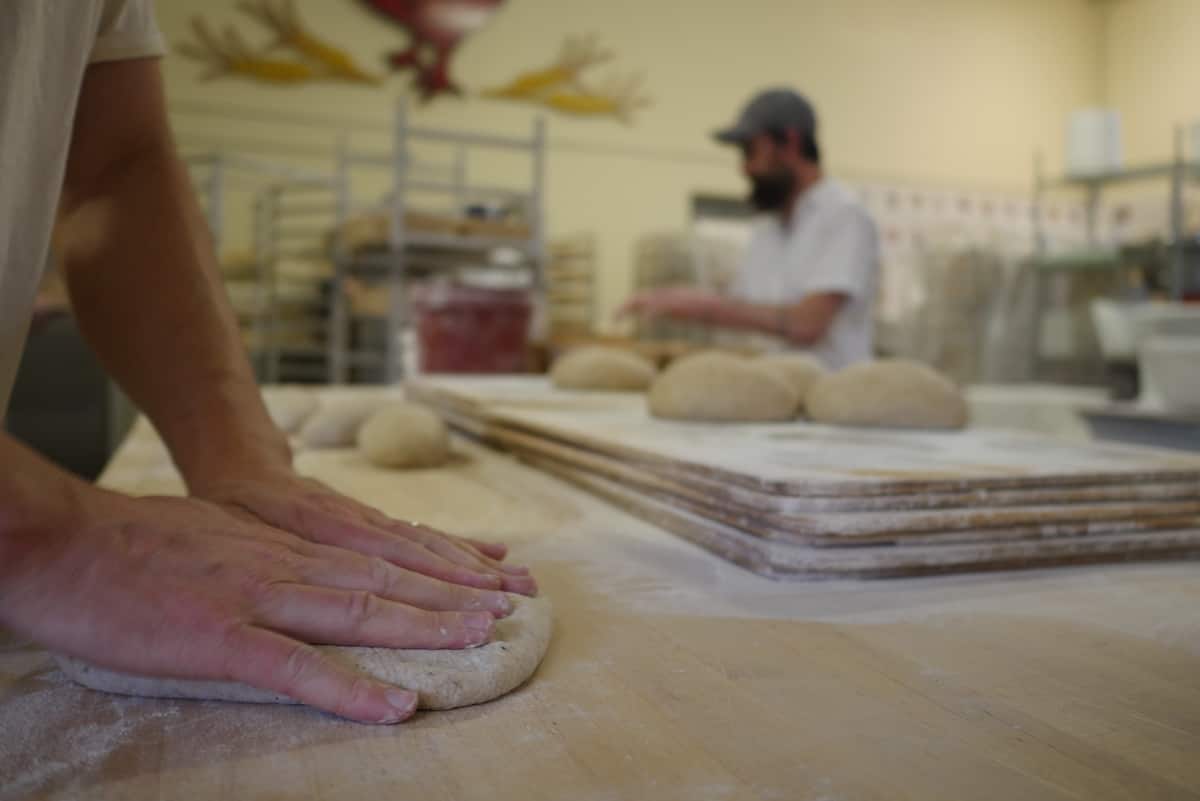 That’s because bread wheat has not been grown in the Northeast for almost a century, and farmers are not equipped with the tools, such as combines and grain bins, for the crop. Besides, our humid summers are less than ideal for grains.

Nevertheless, a few Vermont farmers began to grow wheat for bread in the 1970s and 1980s. Red Hen’s first local flour came from Gleason Grains in Bridport. Ben Gleason started stone milling his wheat in 1982. As an interested buyer, George encouraged Gleason to add sifting equipment, which would increase the amount of Gleason’s flour Red Hen could use. George’s next supplier was Aurora Farms, the largest wheat grower in Vermont. Their grain is roller-milled in New York at Champlain Valley Milling. The latest and largest connection has been with a farm in Québec that recently added a small roller mill, Le Moulin des Cèdres. In each instance, the bakery’s feedback has influenced the crop and production.

“What we get is better because of the work we’ve done with our collaborators on variety selection, harvest and nutrient management, and milling,” says George. 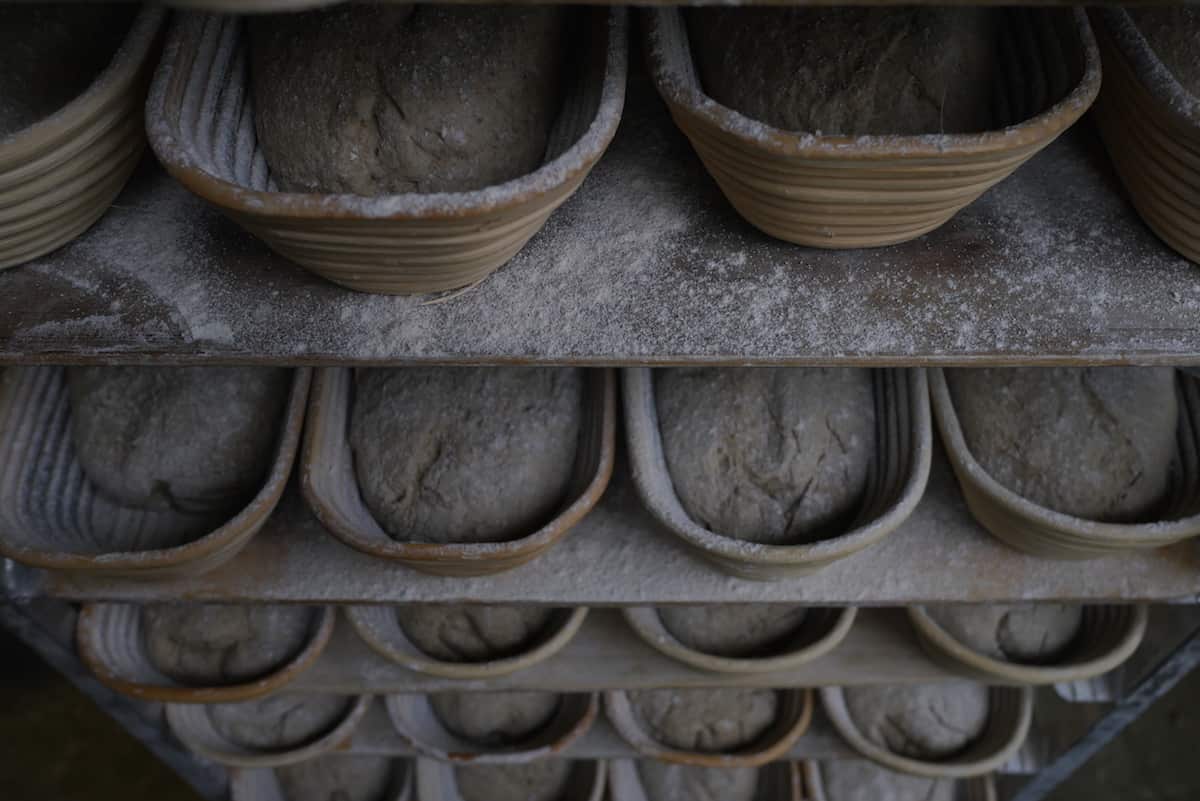 The collaboration between Red Hen and its suppliers reflects the work of the Northern Grain Growers Association, which began in 2003 with support from the University of Vermont to address the need for organic dairy feed. George has been involved in the group’s baking trials along with bakers from the 225-year-old King Arthur Flour, based in Norwich, Vermont.

Elmore Mountain Bread, located high up a dirt road in the northern Vermont town of Elmore, also put a lot of time back into bread. Owners Blair Marvin and Andrew Heyn make up to 1,500 loaves a week in a room-sized bakery attached to their home. The couple just celebrated their10th-anniversary baking wood-fired, long-fermented loaves. For the last two years, they’ve been using flour they mill themselves.

Marvin, a Vermont native, and Heyn, who grew up outside of Chicago, met while working in restaurants in Seattle. During what they envisioned as a temporary visit with Marvin’s relatives Vermont, the opportunity to buy a house with an attached wood-fired bakery arose. They jumped on it, even though neither had experience baking. They learned their craft by doing. 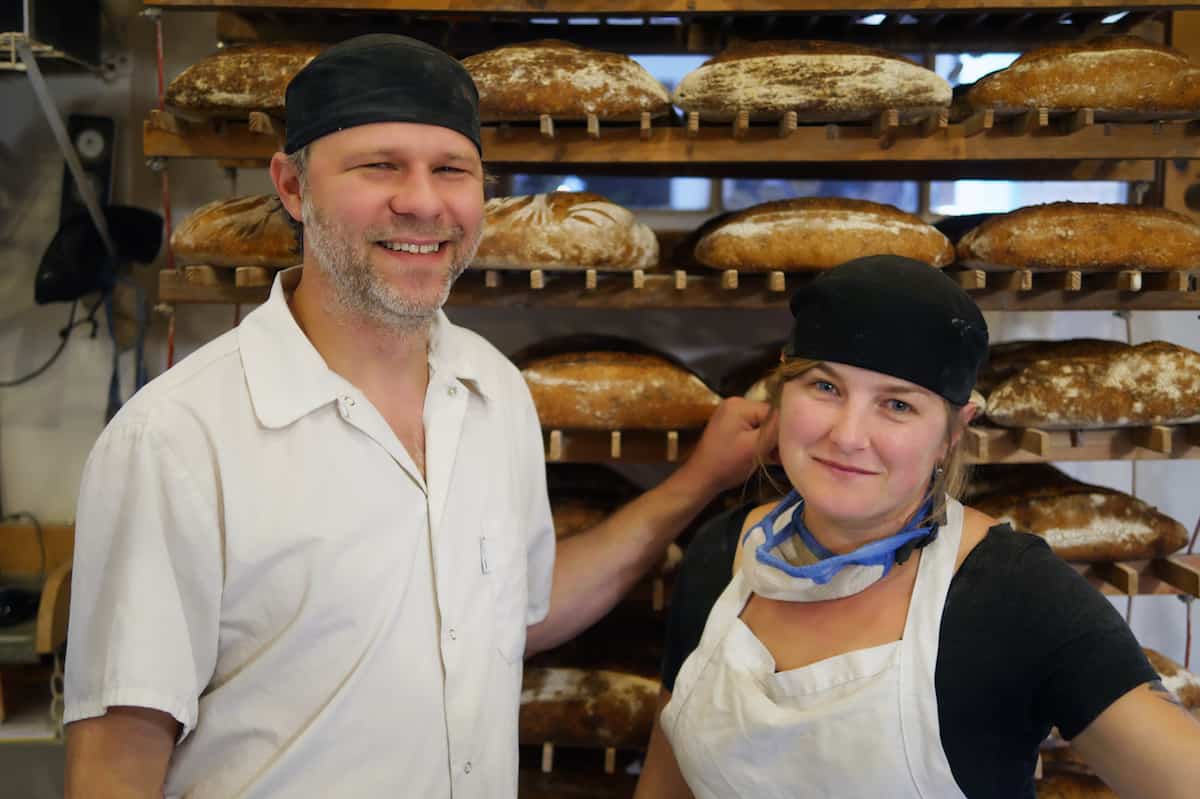 About five years ago, when their oven broke, they started experimenting with equipment. “We’ve been innovating things that have been done,” says Heyn, who applied an engineering mindset to designing a new brick oven and, later, a stone mill.

The decision to mill their own flour came from observing their son. One of the only things the toddler ate was baguettes. While Marvin and Heyn were using organic flour in their baguettes, 80 to 90 percent of the flour was white. Taking on the job of milling has allowed them to use more whole-grain flour.

“We’ve been trying to bring back the historical relationship with tools, philosophy, and methods in bread. The decisions we’ve made in the bakery were influenced by trying to get as close as we can to the root of what we are doing,” Marvin says.

“The research I did for the oven was looking at old wood-fired ovens in Germany and France,” says Heyn. “When I was researching milling, I used a book written at the turn of the last century. It had everything that was known about milling.” 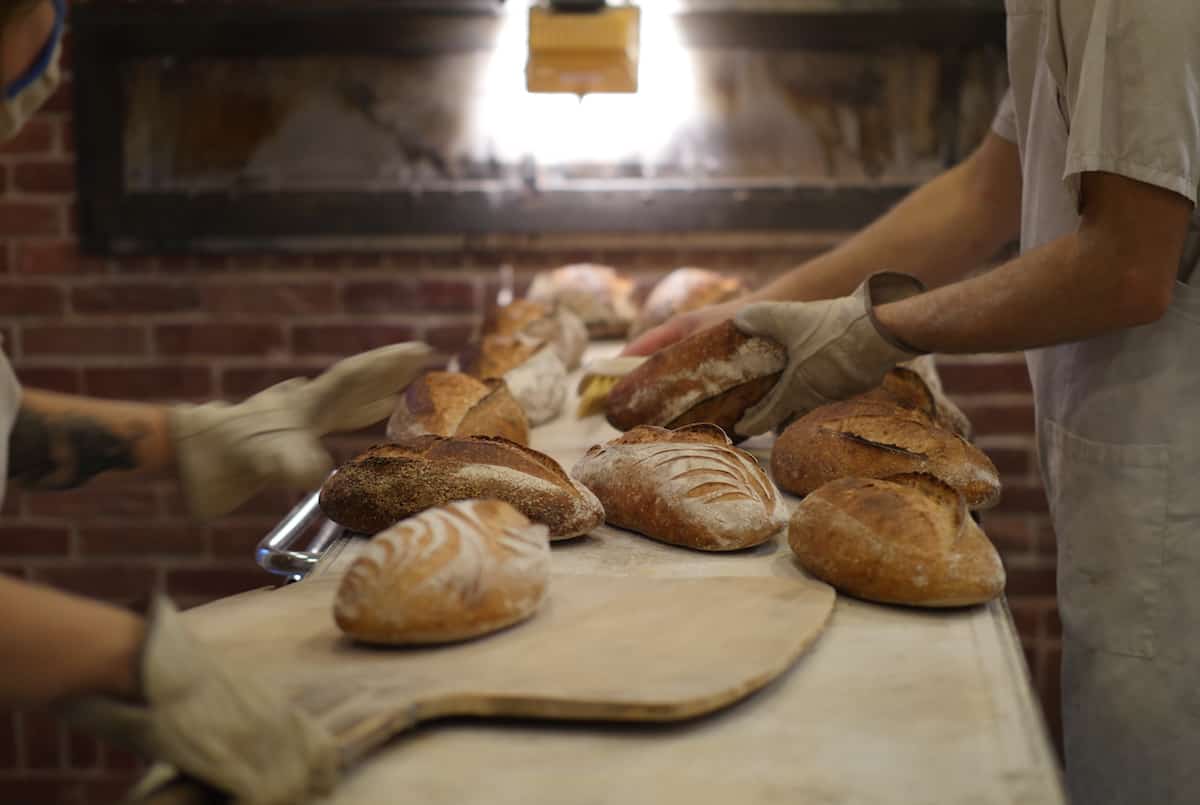 Word of such tinkering travels throughout the collaborative field of bread baking in North America. Lacking a formal apprentice system, bakers rely on each other for practical advice. Often, bakers stay in one another’s towns, observing or working alongside each other to cull ideas for their own systems. Despite its remote location, Elmore Mountain Bread has been a favorite spot to visit. Heyn has also connected with fellow bakers on online forums.

The improvements he made to Elmore Mountain’s oven design have inspired other ovens, and now he is starting a new enterprise to manufacture mills called New American Stone Mills North. The business parallels Heyn’s friend Fulton Forde’s North Carolina-based enterprise, New American Stone Mills. The two companies will work in concert to address the demand for small-scale milling equipment, which is mostly coming from bakers.

Marvin and Feyn are excited to be a part of these new food dialogues, and close to home, as chefs ask them about fresh flour. One topic of conversation is Redeemer, a particularly tasty winter wheat that is the basis of Elmore Mountain’s Vermont Redeemer loaf. It is grown just 25 miles away.

“As people become more aware, [they] are really talking about the fact that the Redeemer is grown at Rogers Farmstead in Berlin,” says Marvin.

I like that kind of talking, because it will lead to more action, and ultimately more wheat, in the Northeast.

All photography by Ben Grunrow