Nine-year-old Arien Wilkerson stands on his grandmother’s porch, popping, locking, and dancing along to the jeers of his North End neighborhood friends who yell, “Do the Michael Jackson! Do the Michael Jackson!” This makes Wilkerson’s mother wary. If her son bends to their will now, then who knows what they’ll get him to do later in life? “My mom would say, ‘Stop putting on a show for people; this isn’t HBO!’” Wilkerson remembers. “‘They want HBO, they can go watch it in their living room!’”

Nearly 16 years later, Wilkerson is walking through his favorite spots in the North End of Hartford. It’s a neighborhood pegged with familiar labels like “pretty rough part of town,” “scary,” and, according to a notable Hartford publication, “one of the capital city’s neediest areas.” Wilkerson doesn’t deny this perception, especially when he points to specific spots on his block: the place he found a dead body; a backyard where he saw his neighbor being chased by police; the corner where his childhood friend, Kerry Foster Jr., was shot 13 times.

It’d be easy to think of Wilkerson as someone who’s persevered as a dancer despite his disadvantaged surroundings. But it’s his life in the North End, with all its complexities, that yields the knowledge he taps into when choreographing performances and connecting with a live audience. “My energy and my purpose, my ’hood-ness, my queerness, my blackness—it all definitely comes from these streets,” he says. 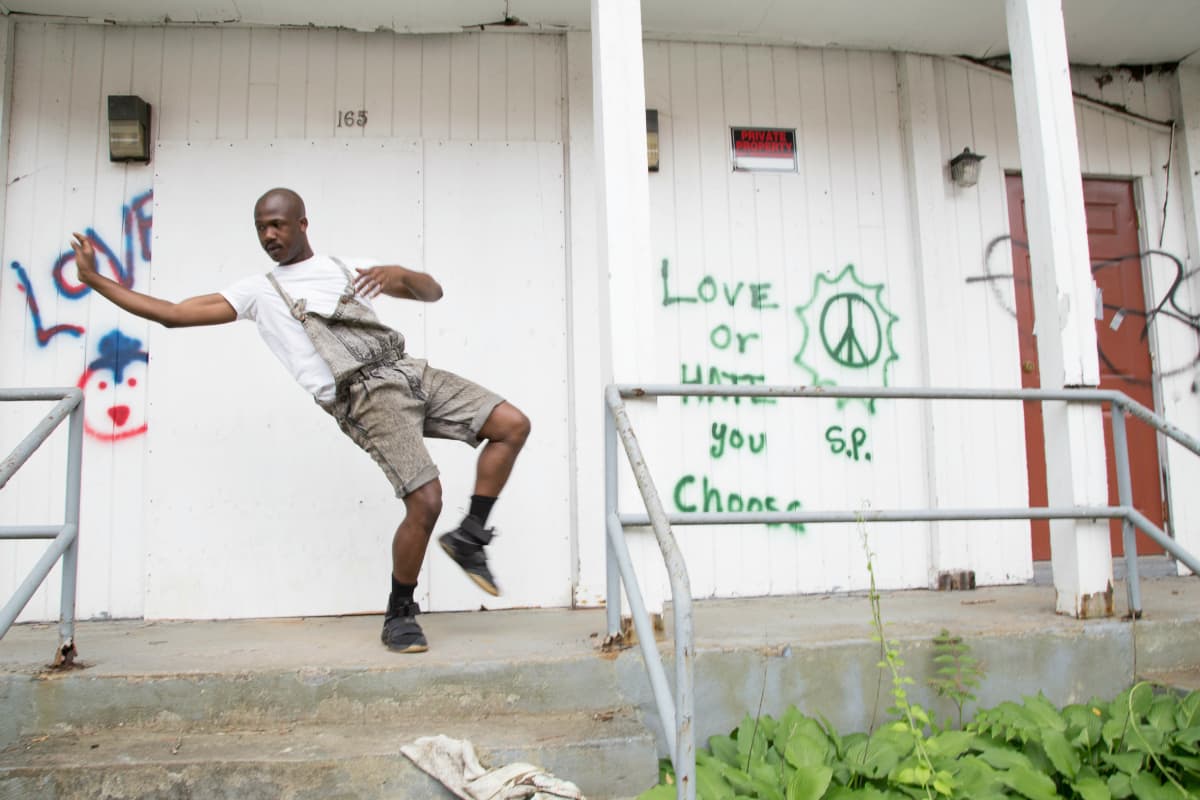 Wilkerson started dancing at the Artists Collective when he was 12 years old. He speculates that his mom brought him to dance because of a heavy suspicion that her son was queer (her hunch was correct, as it turns out). She figured the arts could provide her boisterous child with a safe space for expression and even social mobility.

After just one class, head instructor Jolette Creary demanded that Wilkerson come back. “People are born with some type of supreme talent, and I was born with this inner cunning, and a desire to be on stage and map it out. Jolette knew,” explains Wilkerson. “The minute I hit the stage, it was a wrap.” He danced in his first show one week later. Wilkerson quickly became Creary’s star student, assistant, and rehearsal director. This success led him to the unprecedented position of entering Greater Hartford Academy of the Arts in his senior year of high school.

Deborah Goffe, dance maker and director of Scapegoat Garden, was impressed with Wilkerson even before she saw him dance. “There was a way that he was watching the dance that seemed to be beyond his years, and deeply attuned to what is possible in dance.” Goffe has worked with Wilkerson since these early years, and is clear about the nature of their bond. “Back and forth between teacher and mentor, but also as a colleague. Iron sharpening iron, in some ways.

“He’s dynamic and a gorgeous performer,” she continues. “He really cuts through space in a way that’s compelling for people.” 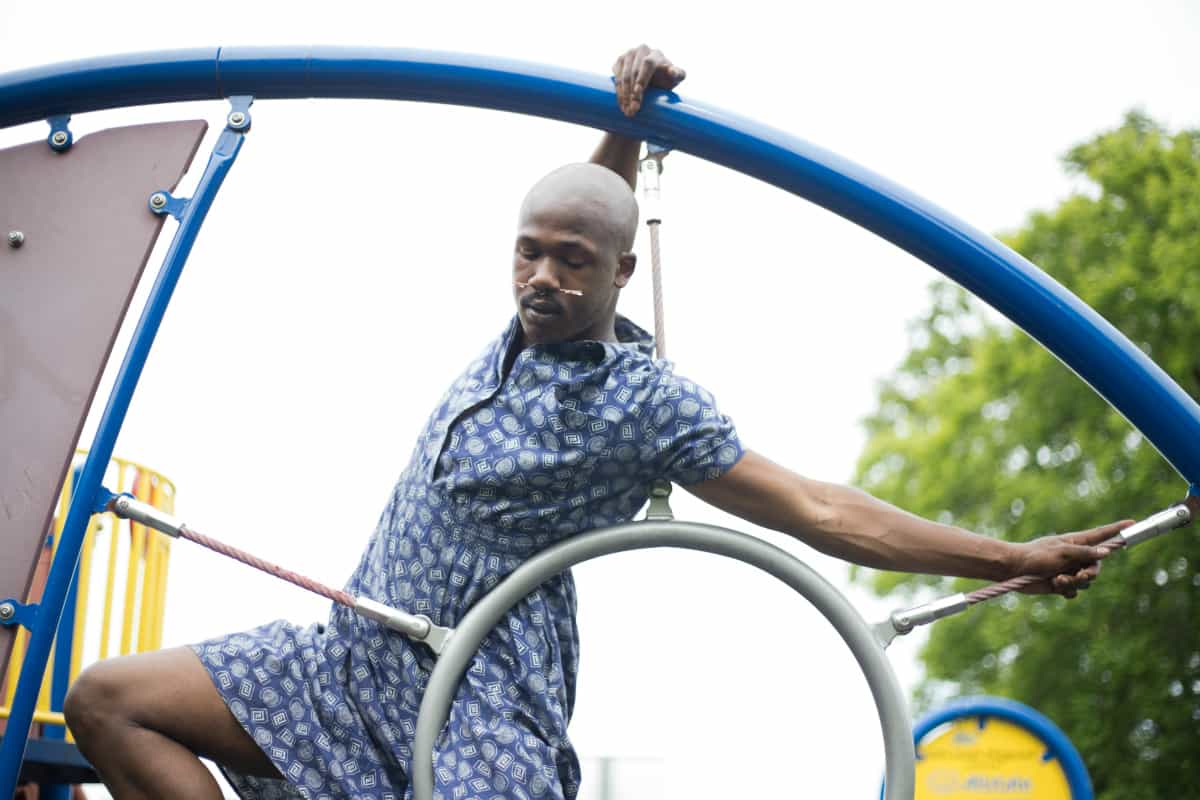 Wilkerson hangs out in one of his childhood haunts, Willie Ware Park. By Brittany Solem

Wilkerson dances with seamless variety, marrying nearly a dozen disparate styles of dance in just a few awesome moments. “Movement can be so enticing, attractive, hypnotic, and so alluring,” says Wilkerson. “I dance for the dogs a lot”—his grandma has two teenie mutts—“and they love it; they sit and watch. They’re so intent. You can hone somebody like that.”

This fluidity and variety is not exclusive to his approach to movement. In the same way Wilkerson transitions from modern dance to breakdancing to ballet to jazz to West African dance, he’ll take you on a winding conversational ride in which he shamelessly professes his love for barebacking in the same moment he hands you a book on labanotation (a system to analyze and record human movement). His performative affect never wanes and is in constant flux.

His time at the Artists Collective and the Greater Hartford Academy of the Arts certainly shaped Wilkerson. But it was Israel that birthed the transgressive queer consciousness and playful approach to identity that sets him apart from other dancers. “I was sitting at home, dreaming of wearing dresses and skirts,” he recalls. “When I went [to Israel] and I saw the fashion and all the gender-fluid people and all these big-ass, beardy, tattooed punk dudes fucking gender-fluid men, I was like, ‘Oh, this is hot.’ It was then and there that I knew I could be myself, and someone would love me crucially.

“I was more like Kanye in high school,” he continues. “But when I went to Israel and came back, I realized I can be Mykki Blanco. I can be Junglepussy. I can be an intelligent, brown, queer, forward person who doesn’t have to rationalize who I am and what I want.” Undeniably, our social institutions present a specific set of challenges for individuals who are unapologetically intelligent, brown or black, queer and forward. Even Wilkerson, with his endlessly candid joy and intense work ethic, cannot fend off all the flies buzzing around the stinking pile that is institutional racism.

Wilkerson responds to this fucked-up system by divesting from institutions that do not want to understand his message. On social media, he posts detailed call-outs about the lack of access and visibility for people of color in Hartford’s performing arts scene. “I try to have more tact than I used to have,” he admits.

Some people find his approach to critiquing these structures confusing, because part of his audience is white. Wilkerson explains, “The white folks who come to my performances come because they want to learn something. They want to reevaluate. People say, ‘Think about the fact that your [production] crew is all white’ and I’m like, ‘Yeah, but they fucking know. They get it.’”

Wilkerson’s not interested in bending to the will of certain arts organizers, or in making work for the sake of funding. Instead, Wilkerson envisions the work he wants to make, then personally funds his performances. “I don’t want to do this thing where I only go to places that have money, and I only make their work,” he explains, “because then I’m building a repertoire of work I don’t even like.”

Even though Wilkerson had several sold-out shows in 2016, and about a half dozen other performances commissioned or accomplished though TNMOT AZTRO, his performance art and dance installation company, he still can’t attain a stable position in the system. After selling out three Projector Series shows at Real Art Ways in 2016, “I’m still broke and I was not getting funding,” he says. “So I was either tricking or working at a restaurant in order to make money for putting on shows and paying artists.”

“Why is it that I have to live in the community, work my ass off, and [they] hire people from Los Angeles to perform here?” Wilkerson asks. “Just give me the space, give me the crew, give me the money, and stand the fuck back.” This is partly why he doesn’t perform in classic prosceniums or black box theaters. Recently, he’s been performing in galleries and museums, fully embracing the challenge. “I like working in those confines because they have mad rules. So many things you can and cannot do. I love that we’re a company from the North End performing around thousand-year-old paintings.” 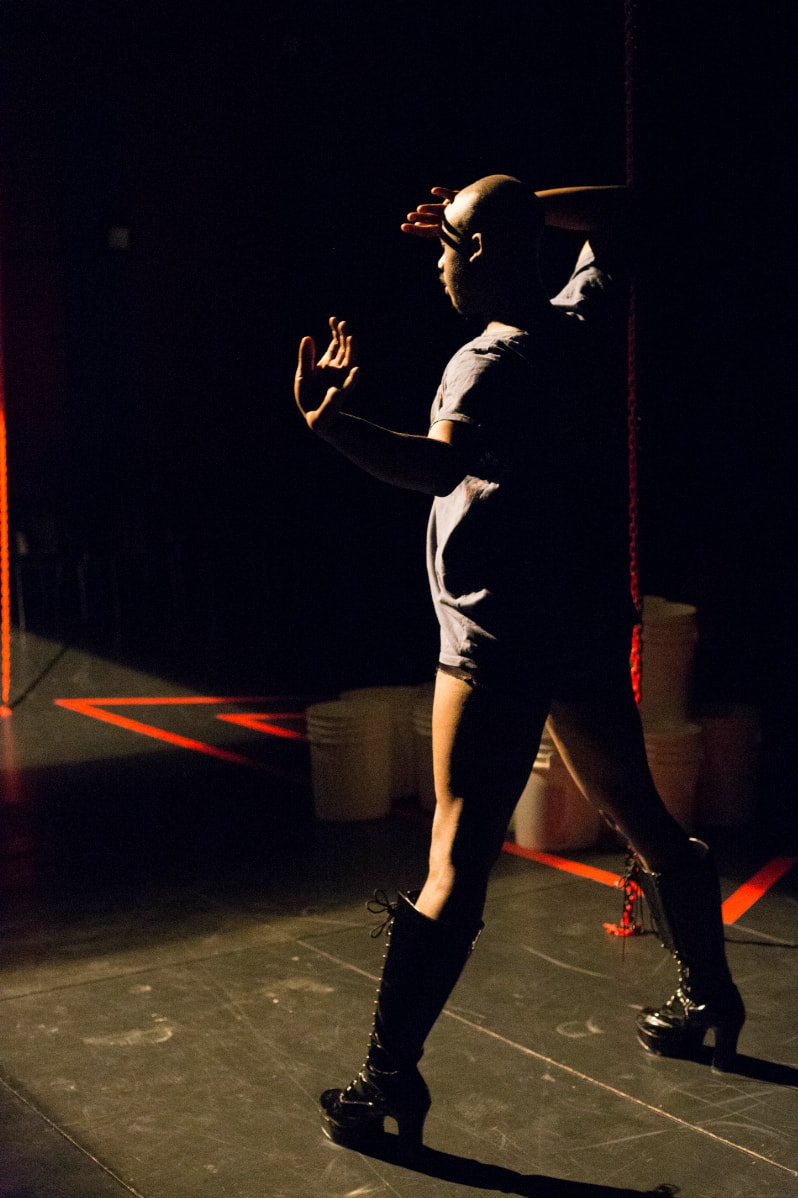 EQUATORS, which was staged at Housatonic Community College, is the most recent piece produced by the TNMOT AZTRO team and explores the intersection of environmental justice, racial justice, and “how racial divides are manifested in homes, neighborhoods, and geography due to impacts of zoning, segregation, and gentrification.” Clearly, Wilkerson’s intellectual and creative preoccupations are varied, vast in scope, and a bit daunting.

Wilkerson is particularly taken with a specific element of the sculpture David Borawski installed for him to dance through during EQUATORS: the metal chain he uses to pull himself up. “Right now, I definitely still feel like I’m on that chain. I still feel like I have to wake up every morning on that chain. I have to take myself to sleep at night holding the chain. Having something hold you up is such a gratifying experience, but also scary.”

Though there’s no doubt Wilkerson is a rogue, hustling to fund his own shows while actively raging against the institutions that still aren’t quite sure what to do with him, he does have a lot of staunch supporters. His newest group of dancers at TNMOT AZTRO are enthusiastic, skillful, and ready to support their fearless creative director. He is nearly in tears when he talks about his new team. “I’m such a baby. I’m so emotional. I cry,” confesses Wilkerson. “I’m a crier.”

Additionally, there are some organizations and individuals outside the world of dance and performance art that have the cultural clout needed to support Wilkerson’s mission. This past summer, he became the youngest person to receive the Spirit of Juneteenth Award from the Amistad Center for Art & Culture at the Wadsworth Atheneum, which celebrates community and cultural leaders. And Kristina Newman-Scott, Connecticut’s director of culture, values his transgressive approach to public discourse and performance. “He’s definitely one of our change agents,” says Newman-Scott. “He’s not afraid to ask questions, or tell you what he’s thinking”—she laughs—“which is appreciated. For him, being young, African American, male, queer, and coming from the world of performing arts, it’s never going to be easy.

“Wouldn’t it be great,” she adds, “for Arien to be the next Alvin Ailey?”

Certainly, Wilkerson could easily head back to the tattooed boys in Tel Aviv, or dance with his friends in different companies across New York City. But that’s not his definition of success. “I’m very invested in bringing high art and fine art back to the ’hood, and back to where I grew up,” he says. His biggest preoccupation is with “build[ing] a language where young queer people and young black people can talk about art. [The North End] is rough and I can’t fight that,” he continues. “I can’t be the guy who’s like, ‘stop the violence, stop the madness,’ but my art can.”

Despite his lack of reliable funding, Wilkerson wants to stay in Hartford. He wants to show the North End his truth, instead of leaving it behind. “I don’t want to do that to Hartford,” he laments. “I don’t want to threaten my city. I feel like I already threaten people enough.”

This piece originally appeared in the October/November 2017 issue. If you’d like to read more articles from that issue, click here.

Subscribers can also see an exclusive gallery of outtakes from our amazing photo shoot with Arien Wilkerson.