Morgan Bulkeley is a humble genius. The Mount Washington, Massachusetts artist’s Nature Culture Clash—on view through February 4th at Berkshire Museum—presents a 50-year retrospective of his successful career in painting, drawing, and sculpture, as curated by longtime friend Geoffrey Young of Great Barrington. But when Bulkeley discusses the process of digitizing slides of old works to organize the massive show, he begins by self-deprecating about his limited faculty with computers.

Technology isn’t the sole source of tension in Bulkeley’s work, which among many things reflects the chaotic relationship between humanity and nature in a manner that’s often darkly humorous but never polemical. The aggressive encroachment of society on the natural beauty of the world has “been a startling event in his life,” largely due to its sheer contrast with the pastoral serenity of his childhood.

“It was practically like living in Noah’s ark as a kid. We had all kinds of wild animals around,” Bulkeley says of growing up with naturalist parents on a small farm, the same one where he lives today. He graduated from Yale in 1966, then spent the next year in Newark, New Jersey, where he worked with VISTA Programs. The summer of 1967 proved particularly troubling as he witnessed the Newark riots. 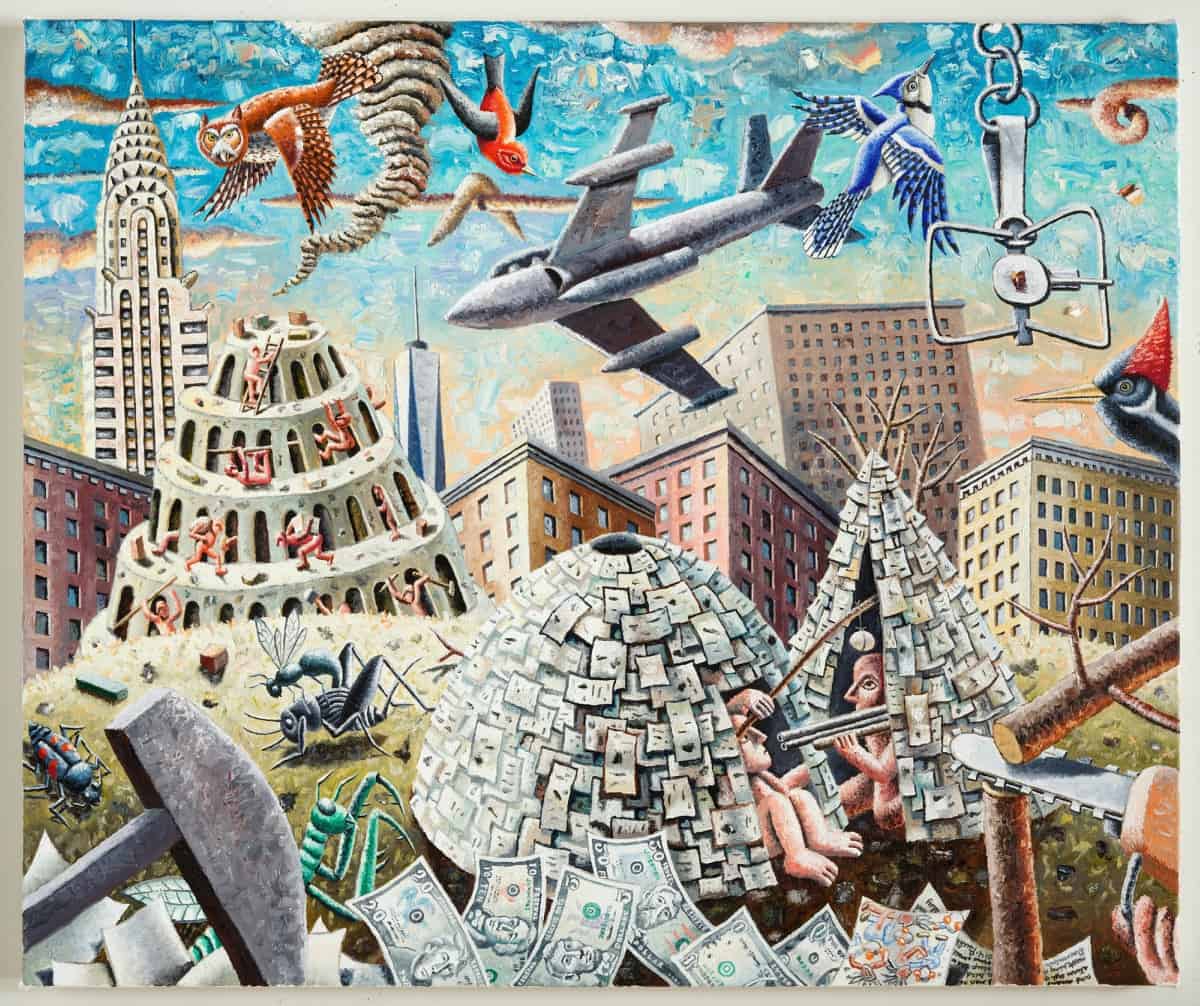 “People there were just kind of hopeless in a way. There were tanks driving down the street. It was like living in a warzone,” he says. “It was a real shock to me coming from my little woodsy background and moving into that kind of a scene, and it began to just be a theme for me.” He continued to see that theme of “growth of urbanism sneaking into nature” play out while living in Boston and Miami over the subsequent years.

Familiar and distorted pop culture iconography appears throughout Bulkeley’s art, and he alternates between paintings that are “tangled up and hard to travel through” and pieces with more navigable spaces, finding a certain relief in the transition. Switching between the meticulous detail of painting and the raw physical act of sculpture helps reenergize him in both forms. Throughout his work he aims to draw humor out of the often foolish behavior of his caricatured figures.

“I hang on to wanting to chuckle at things and look at people’s mistakes and be able to not damn them but laugh at them,” Bulkeley says. 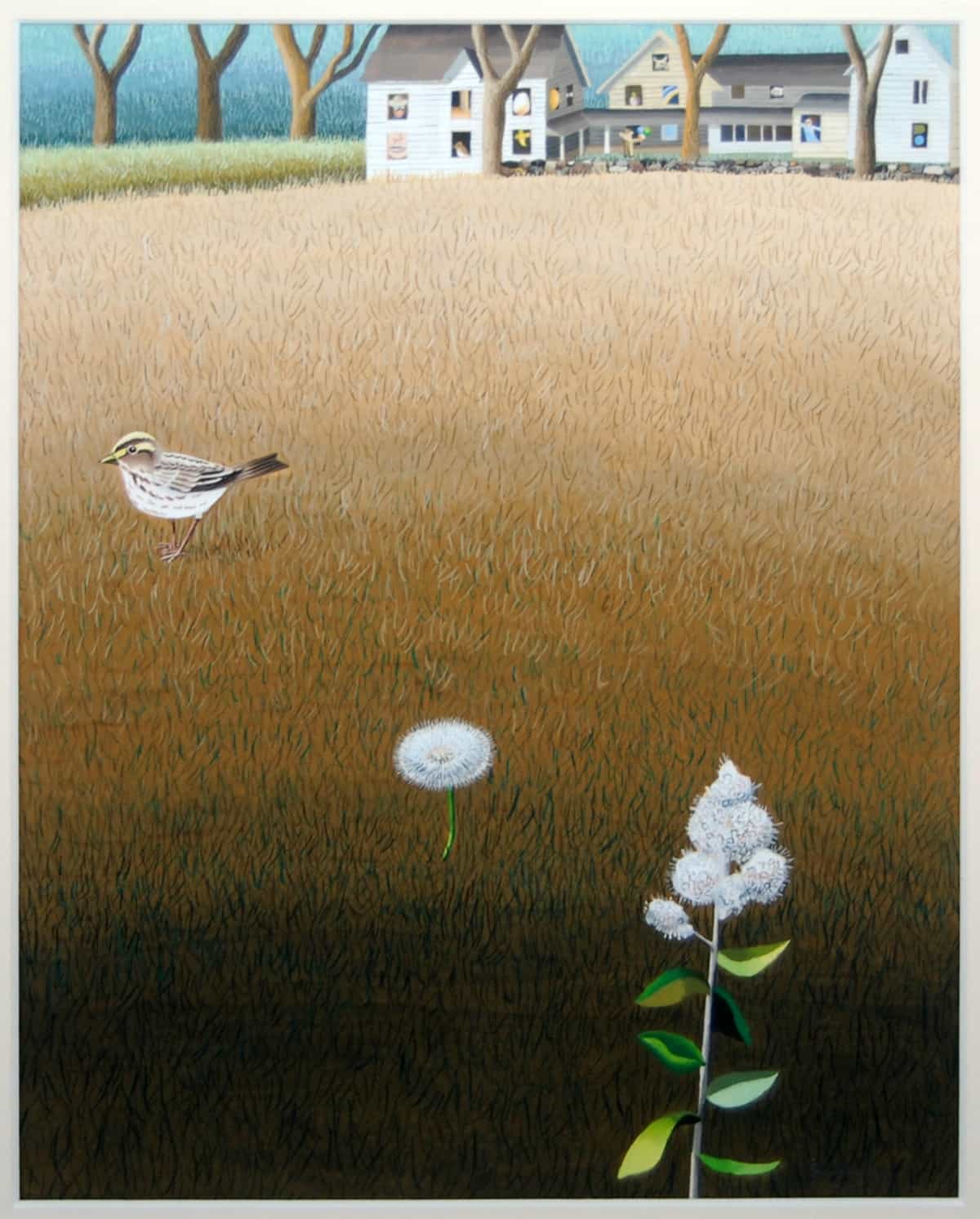 He’s certainly observed turbulent times, but recent national and international trends give Bulkeley particular pause. “If you don’t listen to science, what are we doing?” he says, citing deregulation of toxic waste disposal and climate change among the more frightening current issues. His more recent work pulls both from these external disturbances and from the sadness of losing many close friends and family members in the last few years. “I do think there’s a little more desperation in the later works.”

Even when the work reaches its bleakest points, though, Bulkeley finds a way to laugh and keep looking up. “I’m certainly a hopeful person,” he says. “I’ve loved that balance between something horrific and something absurd or hilarious.” 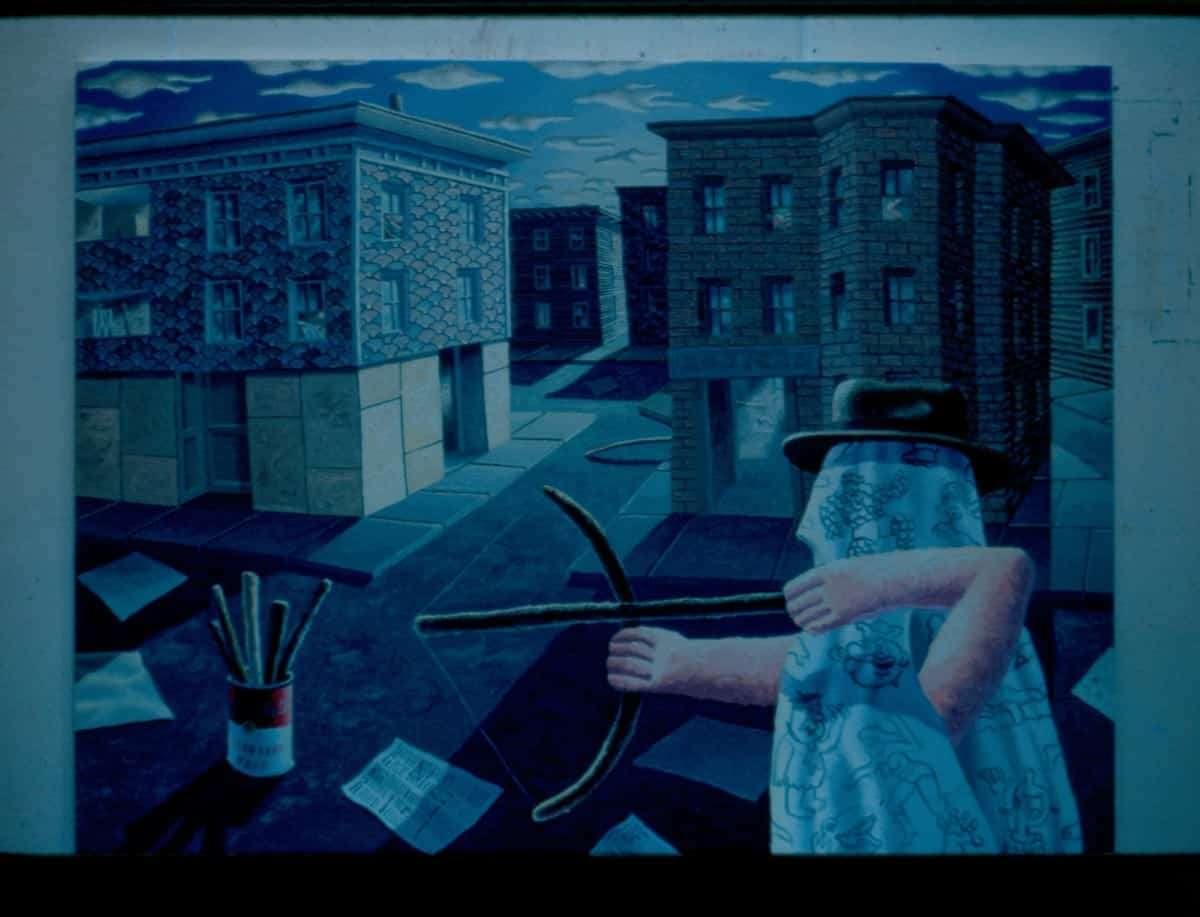 “My mother, when she could get up the stairs to my studio, used to come up. She never really got my work, but she would look at my paintings and say, ‘Oh, that’s really beautiful. Do you feel all right?’ I always kind of liked that response.”