With the country careening into the abyss and my personal problems both increasingly difficult to ignore and comparably banal, I embraced a cultural cliché. I ran away and joined the circus.

Kat Finck, Circus Maine co-founder and producing/casting director, aims to merge the pure physical spectacle of traditional circus with modern circus’ artistic potential for making statements. “I don’t think that it’s possible to do a contemporary art and say that you’re not drawing on what came before you,” she says.

“In so many ways Cirque du Soleil is a traditional circus. It’s just there’s no animals. And that’s where people draw a huge line,” Finck says. “But I don’t think the line between traditional and modern is about whether or not you have animals. I think it has to do more with what the message you’re trying to give your audience is. I think there’s value in both.” 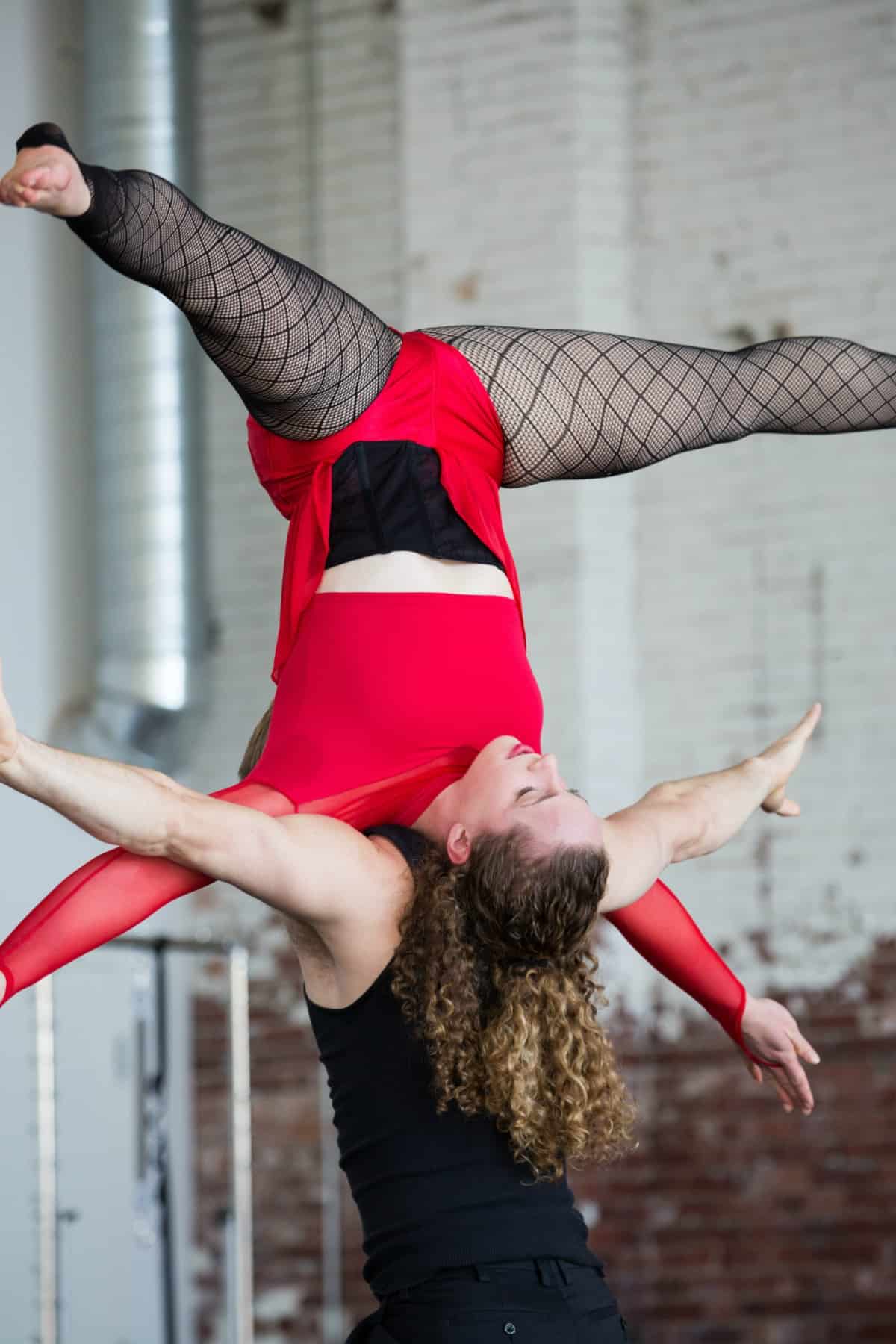 My run-away day started with an introduction to the basics of contemporary circus art by Finck and Circus Maine instructors Mel McGovern, Sierra Nicholls, and Mike Kelly. That was followed by handstands, at which point I quickly remembered that my overall athleticism could use some improvement.

My choice of trampoline over high wire for a second activity makes little sense in retrospect. I’m afraid of open uncontrolled heights, so the guided assistance for a high wire demonstration would have probably been more comfortable than my freeform flopping on the trampoline, which left me with momentary lower back compression after I butchered proper landing technique.

The Opening Act for Circus Maine

Circus Maine began in earnest in the fall of 2015 after a company called the Circus Conservatory of America shuttered. Finck and her partner and fellow co-founder Josh Oliver inherited the space. “We were essentially the anchor tenant here when there were no streetlights, no parking lots,” she says. “It was really Wild West.” A supportive arrangement with the landlords helped them get the company off the ground and undergo a massive build-out that involved repouring the concrete floor (which now boasts hydronic heating) and digging the trampoline pit “by hand with shovels.”

Finck, who hails from a small fishing village on an island off the coast of Nova Scotia, began her journey to the circus while nannying in Germany. “I didn’t speak the language and I didn’t know anybody and was really lonely, so I spent all of my free time juggling in the attic of these people’s house in Germany. And of course I’m six feet tall and I’m under the roof so it was really low so I was kneeling so that I could have room to throw the balls. Eventually I really enjoyed it and I stuck with that.” 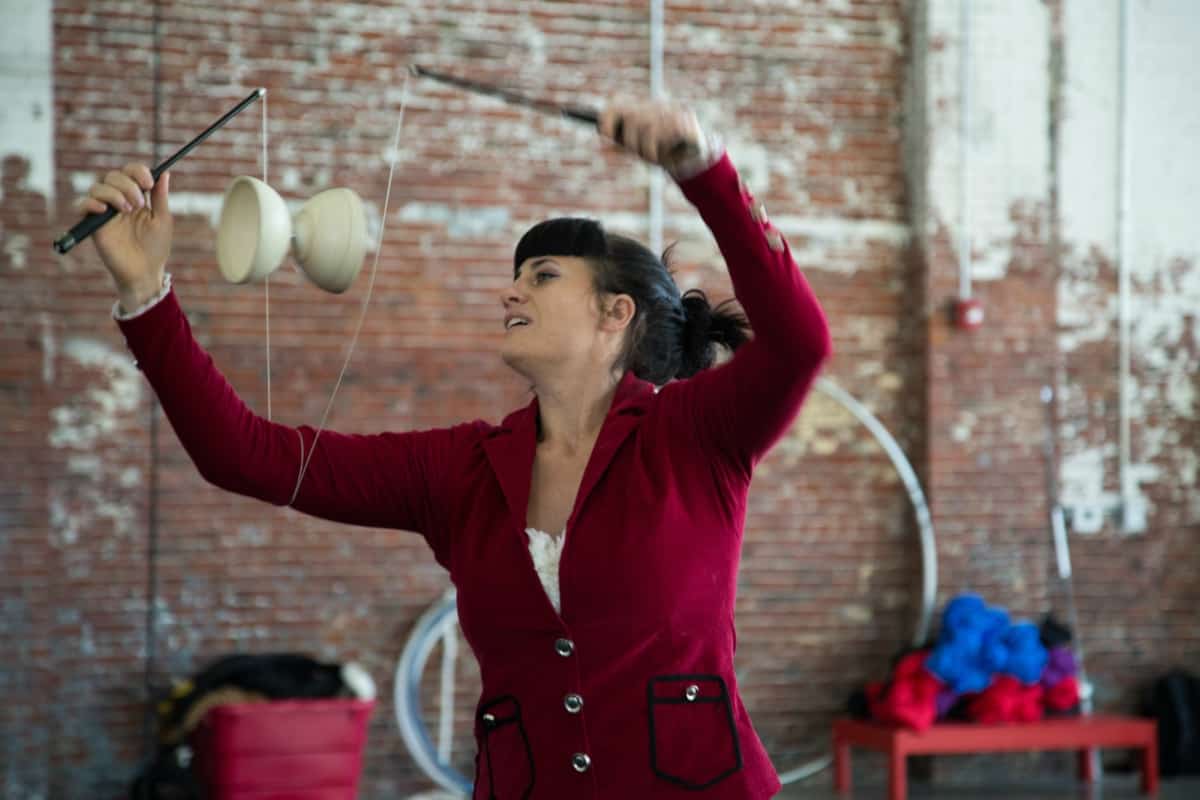 In a circus troupe in Newfoundland she joined upon moving back to Canada, Finck juggled and learned a variety of traditional circus acts and took up partner acrobatics. She moved to Maine with the plan of going to school to become a midwife while her husband (who’s from the west coast of the United States) was living in Montreal. The two were hired by Circus Conservatory of America. “It’s just been following our lives where they lead us that led us to New England.” She says. “It was in America but it was on my coast, so to say. I came across the border and he came across the country.”

McGovern, who was one of Maine Circus Academy’s first students, also had a unique journey to the circus. She’d done yoga before, and started training in aerial fabric while living with her partner in Colorado. The two moved to Portland as Circus Maine was starting up. McGovern threw herself at the three-year professional program, which introduced her to a variety of circus arts, dance, and acting skills, unlocking “so many doors that I didn’t even know were there to open.”

After specializing in aerial straps and aerial fabric, McGovern now hopes to continue making circus art and growing the school and company. “I love coaching,” she says. “I’ve been working with some people now around a year and it’s really cool to see their progress and help them achieve that, and also internally their confidence is higher. I find that just as gratifying as being onstage and getting applause.” 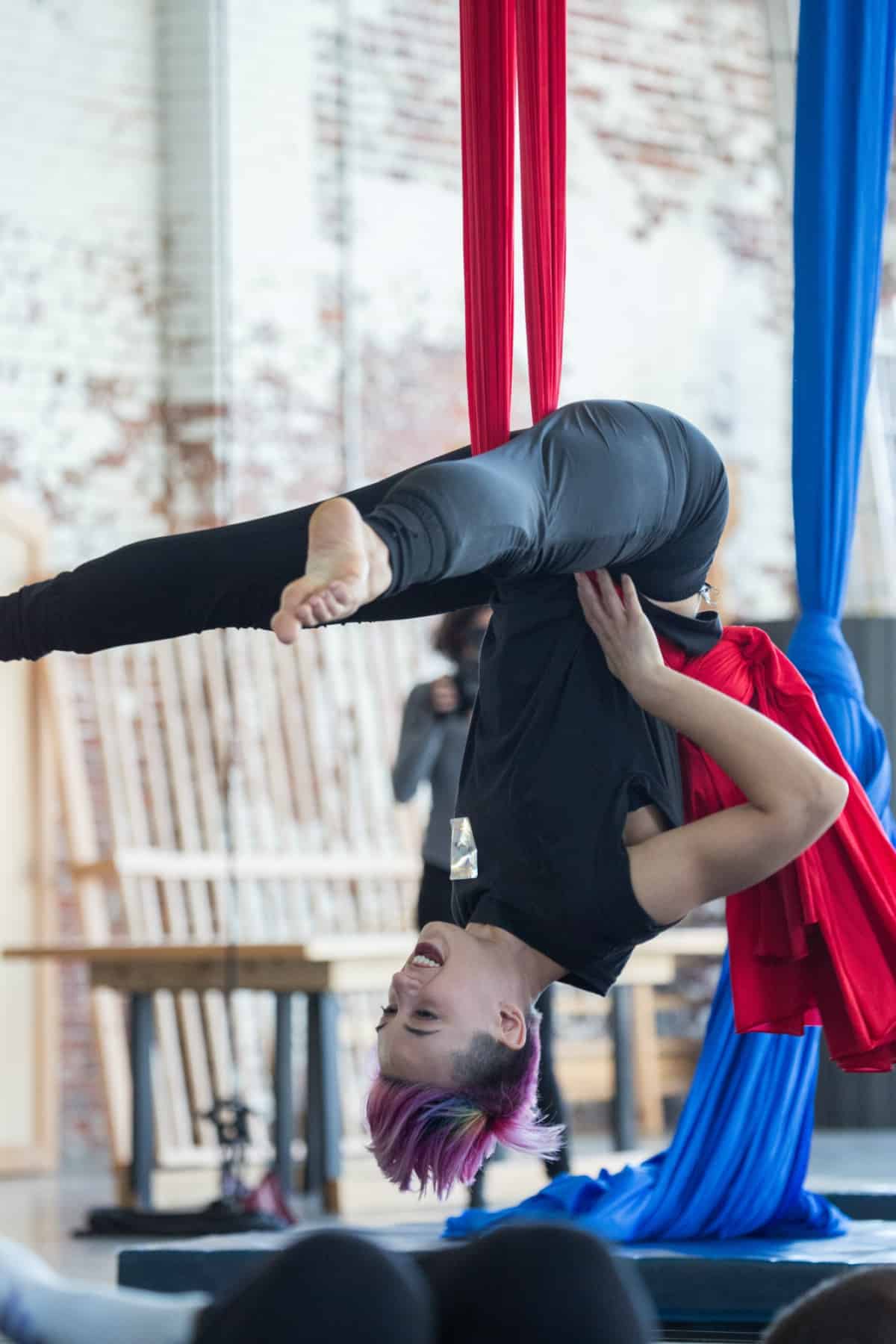 Finck recently produced an all-women’s cabaret, a performance she notes happened to take place in the wake of reporting on Harvey Weinstein’s history of sexually assaulting and harassing women in Hollywood. “I felt like it was important to give women a chance to step to the forefront. And I feel like I want to do that as a producer and as a director as much as I can — create space where everyone can be heard, not just the people who we always are listening to.”

McGovern notes her mission “to put out a different message than what is shown on the stage in some parts of the world. Even though people think of the circus as counterculture, in a lot of the world there’s still that heteronormative girl-meets-guy love scene and that’s not what I’m interested in putting out there. My world isn’t like that.”

Finck explains that Maine Circus Academy in particular provides a useful space to help kids understand the fundamentals of consensual platonic touch. “I feel like one of the things that we give to the kids that come and train with us is actual physical connection to other humans that’s really healthy and really safe,” she says.

“I feel like it’s such a useful tool for kids to grow up meeting people and interacting with them physically in a way that is safe and healthy and normal. It makes it so that it’s possible for people to have a context to understand what good is and it’s something to contrast against when — I hate to say it, but almost inevitably in this world — when people run into others taking liberties with their bodies. I think that’s an interesting thing we’re able to provide to young folks specifically is perspective on that front.”

Aerial fabrics reassured me of my circus prospects. Hanging upside down, my legs splayed out to secure my center of gravity over the knot in the material, I took a moment to meditate. Should I forget about the whole writing thing and stick around with this group of intelligent, talented, and disciplined performers? After insightful conversations with Finck and McGovern, I’m leaning toward trying to find a middle ground.