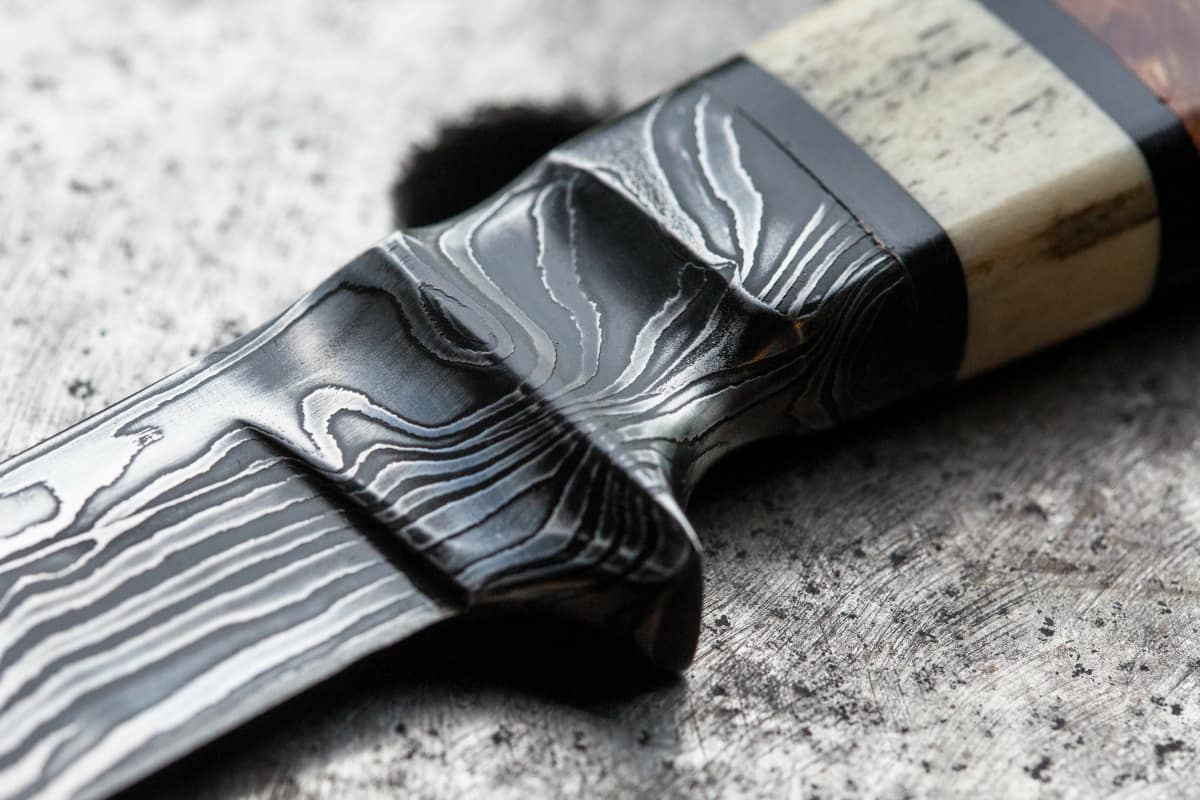 Nick Anger brings intensity and endless curiosity to his one-of-a-kind knives. Just don’t ask him how to buy one.

It’s early spring in Vermont, drizzly and chilly, and Nick Anger is a bit crabby about the weather. He can’t open up the doors of his workshop to use his propane-fueled forge, and that prevents him from pressing steel for his knife blades.

Anger loves to work. He often says he does nothing but sleep and make knives. He never loses the fascination with turning “an ugly little chunk of steel” into a stunning yet wholly functional object. “I really just like the constant challenge of outdoing what I’ve done before,” he says.

He has recently focused on more closely marrying the intricacies of the blades with their handles. “What I’m trying to do is understand the material more, and its relation to the natural woods that I find,” he explains. 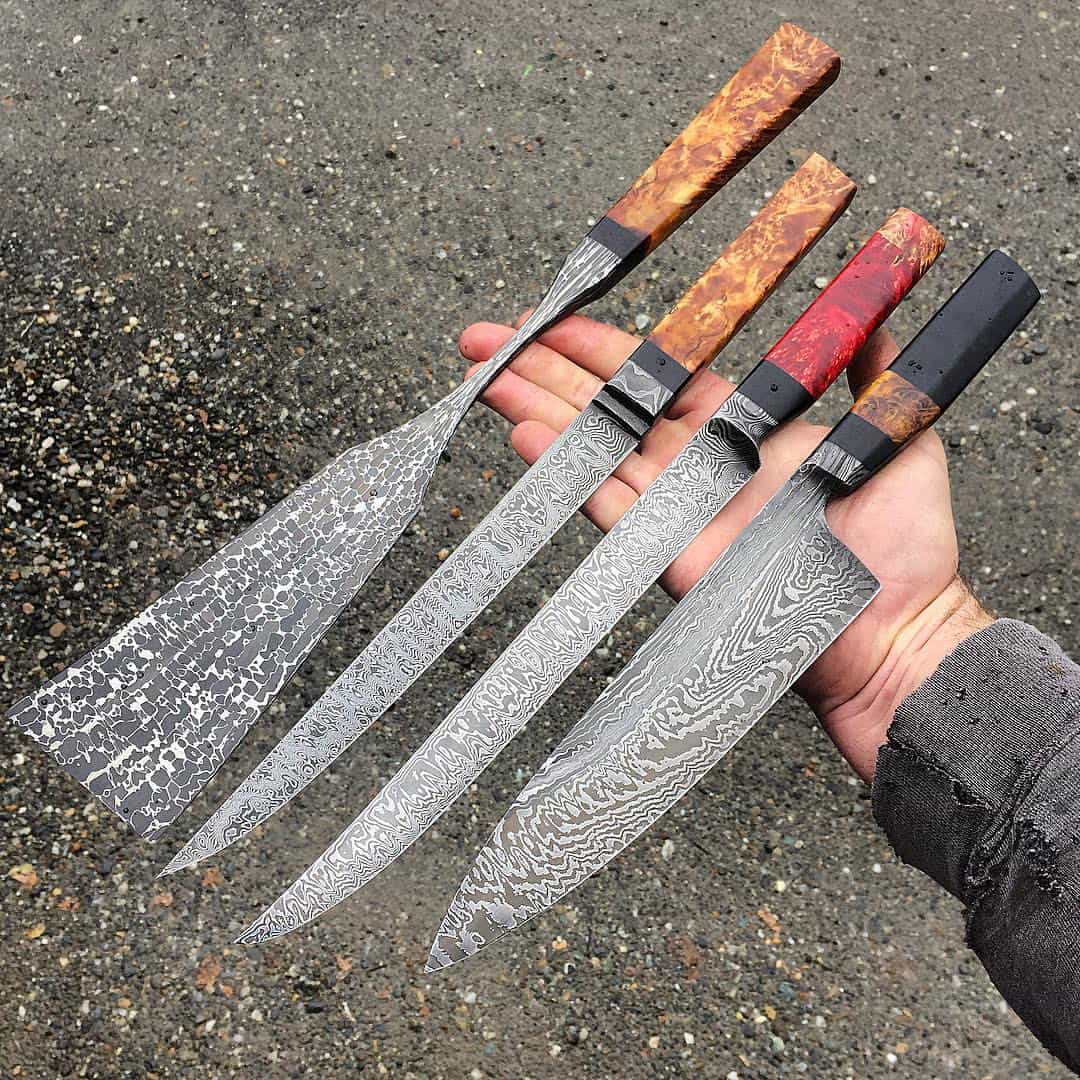 A spatula and knives made with steel ball bearings and high-nickel powder. Photo by Nick Anger

In downtown Johnson, Anger’s workshop sits behind a Main Street shop, where he hopes to avoid unexpected visitors that disturb his flow. Big, burly, and lumberjack-like, Anger has a name that may seem like a suitable moniker—though the French name is actually pronounced “on-jay.” Heavy metal music blasts while he forges, or he listens to audiobooks through headphones. (2666: A Novel, by Roberto Bolaño, was his pick in the spring.) “When I work,” he says, “I shut off from the world completely.”

His 1,900-degree forge makes a thick chunk of steel, called a billet, glow orange hot. He twists the steel in a clamp, shoves it back in the forge, then hammers it on his anvil or in a pneumatic machine that pounds it with a rhythmic thud. A 24-ton hydraulic press provides the “squeeze” to meld the molten metal with as many as 400 layers. Each type of metal has a different chemical makeup, and reacts differently to the heat—creating the striated Damascus blade. Beaten into submission, the steel gradually flattens into a slicing shape, which Anger dips into ferric chloride, revealing the invisible pattern like magic. 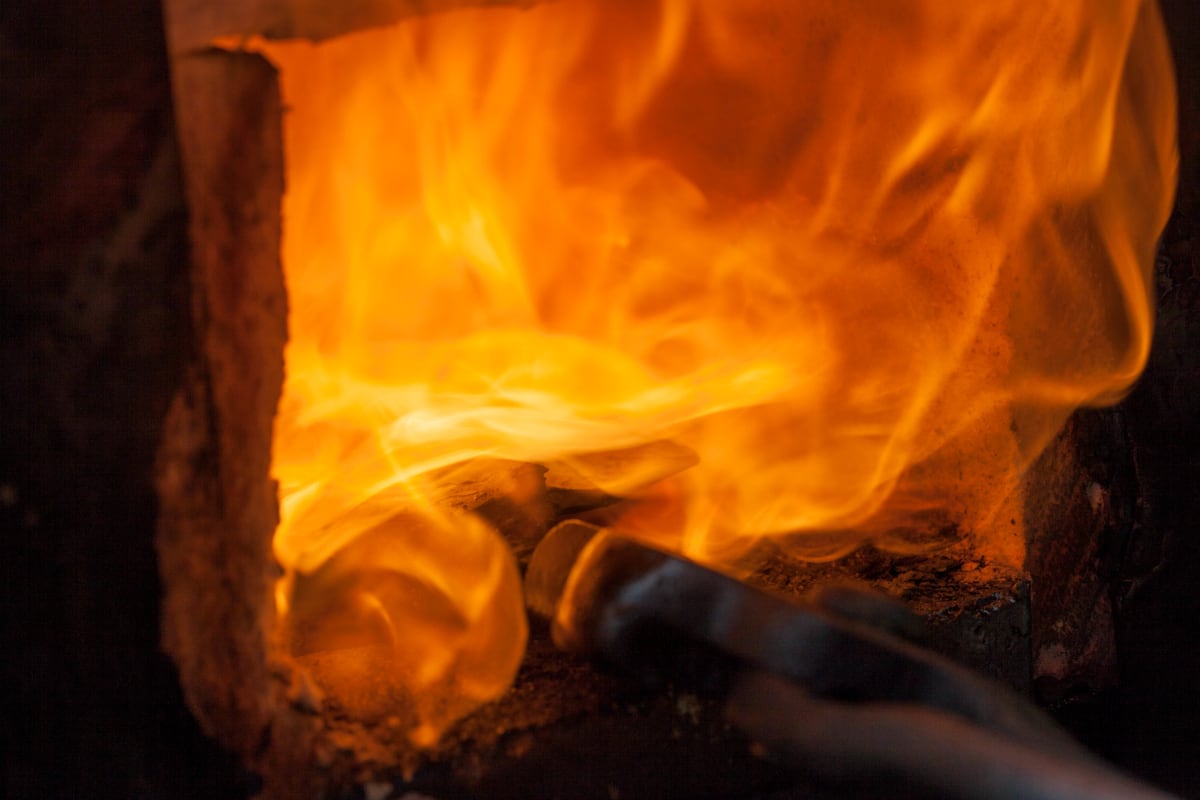 Then, the grinding starts. Sparks spill from the grinder as the belt meets the blade. Sanding blocks with finer and finer grit finish the polishing. Anger fits the handles over the tang and attaches them to the bolster of the blade with industrial-strength glue, then coats them with resin.

The process involves as much chemistry as creativity. Anger recently coaxed some cool-looking squiggles out of a squeeze of powdered steel and 52/100 chromium steel ball bearings. “I love the constant surprise of grinding into that billet and seeing the pattern for the first time,” he says.

What he dislikes is any commercial aspect of his work. Anger gets ornery when someone asks about buying his knives. Questions posted on his Instagram feed—“How much and how can I get it?” is a common refrain—usually go unanswered. His 80,000 enthusiastic followers include fellow knife makers who gush “super badass” and “I drool every time” over each new image.

Anger has no interest in responding to email inquiries and taking orders. Customer demands will only restrict his vision, he states. “Then I’m no longer free to do what I feel like I need to do.” However, once he connects with someone—a chef, another artist, or even an eager young apprentice who manages to track him down—he will delve deep to deliver them the perfect knife. 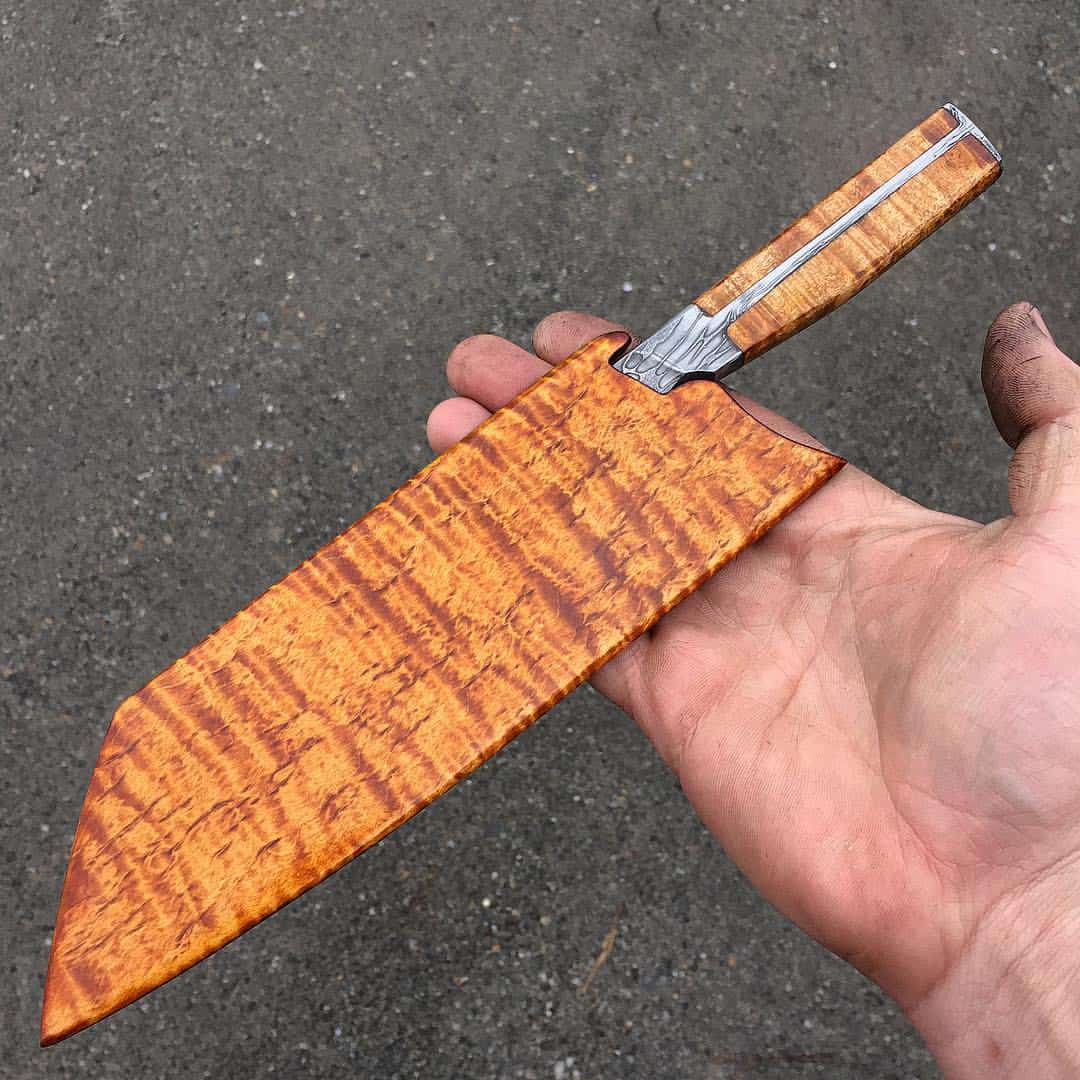 Matt Jennings found Anger while following other bladesmiths on social media and hearing about him from chefs he knew from the New England Culinary Institute in Montpelier. The chef and owner of Townsman in Boston and a multiyear James Beard Award nominee, Jennings was immediately drawn to Anger’s aesthetic and homegrown approach.

Jennings direct-messaged Anger and they conversed about food, people they both knew, and other non-knife topics. Then he suggested that he’d like a new tool. They discussed Jennings’s needs. “He asked me to tell him the story of where my food comes from,” says Jennings, who specializes in fresh, hyper-seasonal ingredients. “I told him I was just a fool for the ocean, a fool for the sea.”

Anger made Jennings a 10-inch chef’s knife with a maple handle that has an open crack, allowing light to shine through, where Anger embedded a scallop shell and a piece of fool’s gold. Jennings was blown away.

The chef has since bought three more Anger knives—including one for vegetables and a Kiritsuke-style slicer for raw fish. They perform as well or better than any other knife he has used, he confirms. They hold up under the abuse of a professional kitchen and are sharp enough to slice through a cardboard box (which he would never do) and still glide through fish flesh. All of his knife-obsessed cooks view them with envy. “[Anger] spends a lot of time sourcing materials and giving mindspace to how those materials get put together,” Jennings says. “Nick’s knives are meant to be used.” 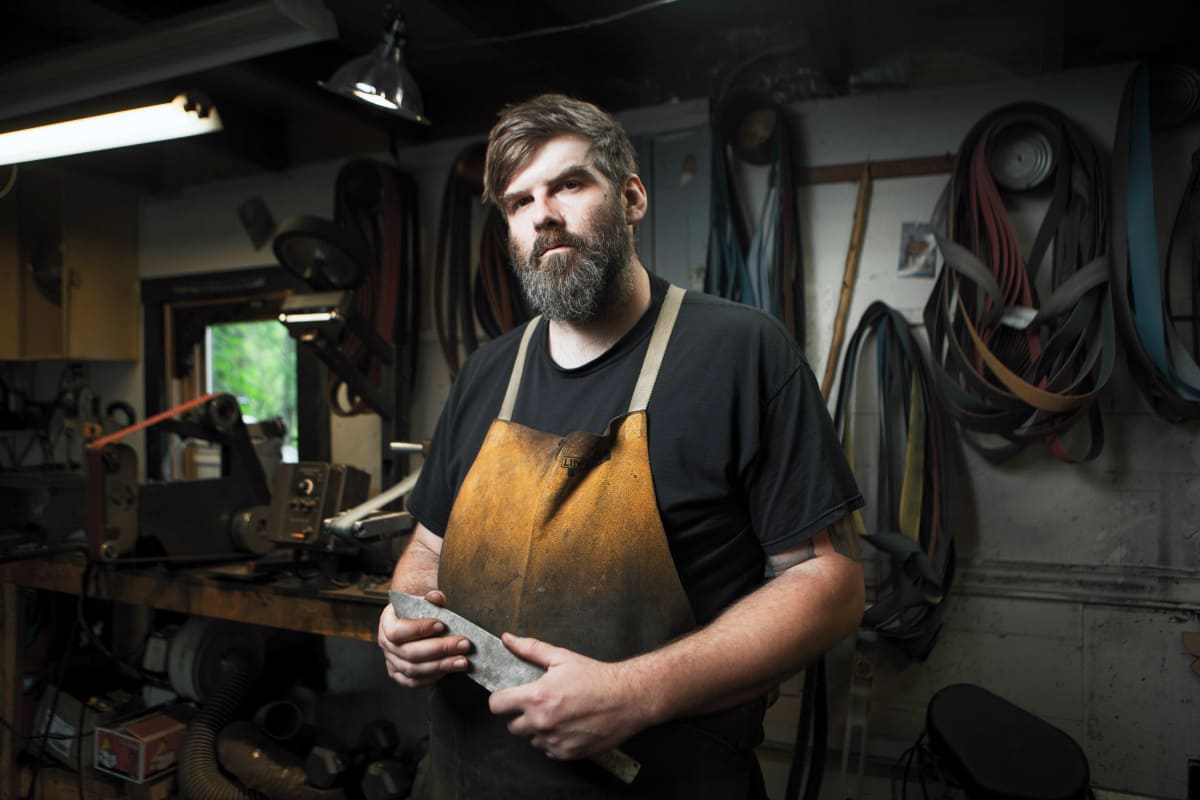 Nick Anger in his studio. Photo by Scott Pasfield

A native of Colchester, Vermont, Anger’s first post-college career was as a mental-health worker at Laraway Youth & Family Services in Johnson. In 2007, when his college classmate and best friend, Harlan Mack, was in residency as a metal sculptor and painter at the Vermont Studio Center nearby, Anger would hang out in the shop in his free time. “He was the smartest guy in school,” Mack says. “His brain is just beautiful.” Mack taught him a little about working with metal, and Anger was hooked. Still working at Laraway, Anger began apprenticing as a blacksmith at Iron Art in Stowe. Once he had enough money saved from his job, he quit to forge full time.

Anger devours information, and will ruminate for hours with Mack about, for example, the finer points of pairing 15N20 alloy with N29 steel, his friend says. “A lot of his creativity is generated from his ability to freely associate and create a web of connections between everything,” Mack explains. “The way he picked up metal was a way of letting his mind wander.”

Anger makes 100 to 300 knives a year and, when he sells them, charges $75 to $100 per cutting inch. But he’d just as soon give away a knife to a person he likes. These days, he has branched out with the business side a bit, offering pieces through eatingtools.com and homebutcher.com, allowing those websites to handle customer interaction. His online inventory quickly sells out.

The money has never been important to Anger. Only the work matters. That’s what feeds the insatiable imagination of an artist unable to stop forging—even in bad weather.