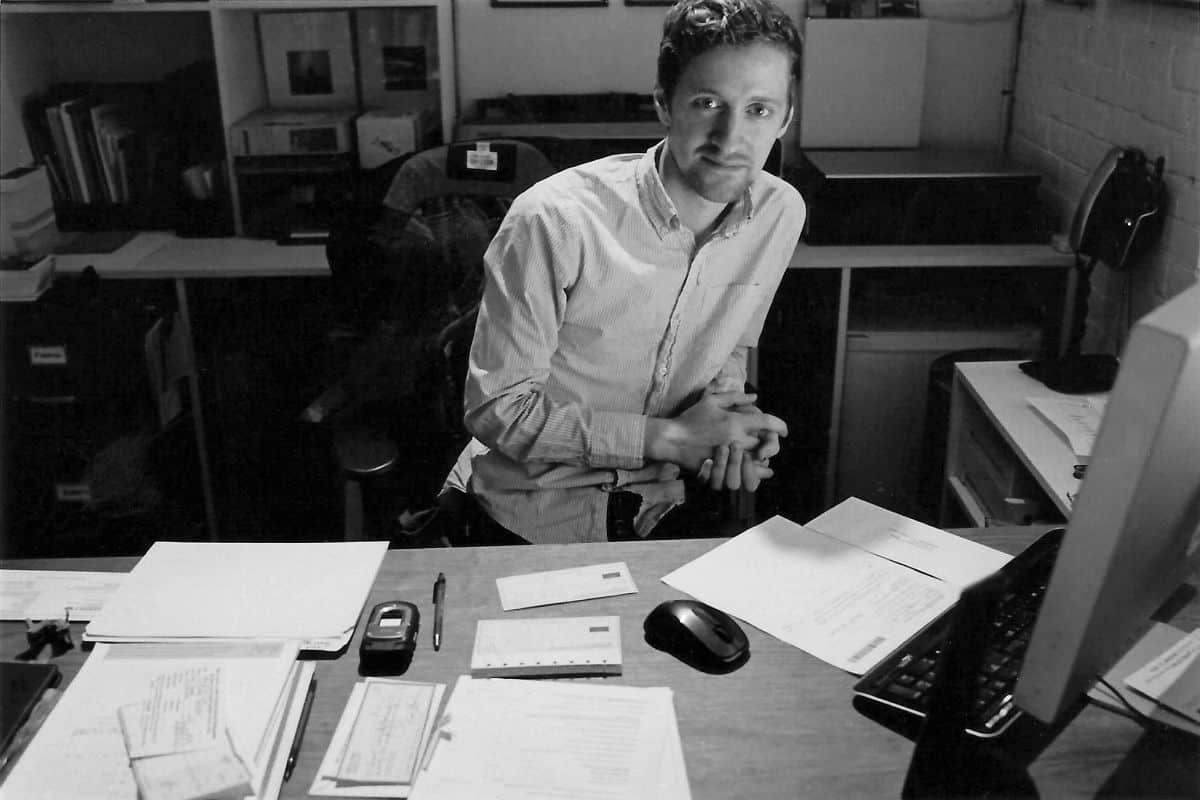 Five Questions With … photographer Joshua Farr, director of the Vermont Center for Photography, a photographer, and so much more.

As described in our January, 2017 post, Brattleboro’s Joshua Farr has taken the Vermont lifestyle of having multiple jobs at once very seriously. In addition to being the director of the Vermont Center for Photography, Farr works for Good Bear Productions as a web designer, is in charge of event photography for the Brattleboro Art Museum, organizes Pop-Up Brattleboro, teaches at In-Sight Photography Project, and is a professional, documentary-style photographer. In his spare time (how on earth does he have any?) he also likes to repurpose old furniture. Despite having several 12-hour workdays in a row (“This is not humane self-treatment,” he admits), Farr took the time to answer some questions for Take.

Take: Are you a native or transplant? If native: Who was your rival town growing up? Transplant: When did you know you were a NE’er?
Joshua Farr: Born in Maine, went to school in New Hampshire, and now living in Vermont. I always say that I’m moving west one state at a time. Considering the fact that my extended family hasn’t lived outside of Maine for many generations, I often feel like a transplant. But then I remember that both states have the same obsession with moose and maple syrup, and I suddenly feel right at home again.

Take: What one word would you use to describe New Englanders?
JF: Salty.

Take: Who are some of your favorite New England-based artists? (could be music, visual, etc.)
JF: This is a loaded question to ask a gallerist/curator! But if I had to rattle off a few, I’d probably mention folks such as my very own college photo professor Doug Prince, furniture-making mad man Johnny Swing, photographer Tanja Hollander, and of course, the uncategorizable Jonathan Gitelson.

Take: What’s the funniest thing you’ve seen while driving in New England?
JF: Brattleboro has its very own resident world-class competitive exercising enthusiast, “Real Bill Kathan,” who can frequently be seen doing speed-jumping-jacks to music on Main Street, or jogging for miles while balancing a baseball bat on his hand. He knows how to capture folks attention—without a doubt.

Take: What’s pissing you off today?
JF: The fact that Brattleboro picks up trash every OTHER week. Over the course of the time between pickups, our local rat/raccoon/feral-cat population manages to lock in coordinates for our trash shed and strew stinky trash all over our yard for me to clean up—only to come back inside for dinner smelling like a dumpster. It just makes my day. Every. Single. Time.