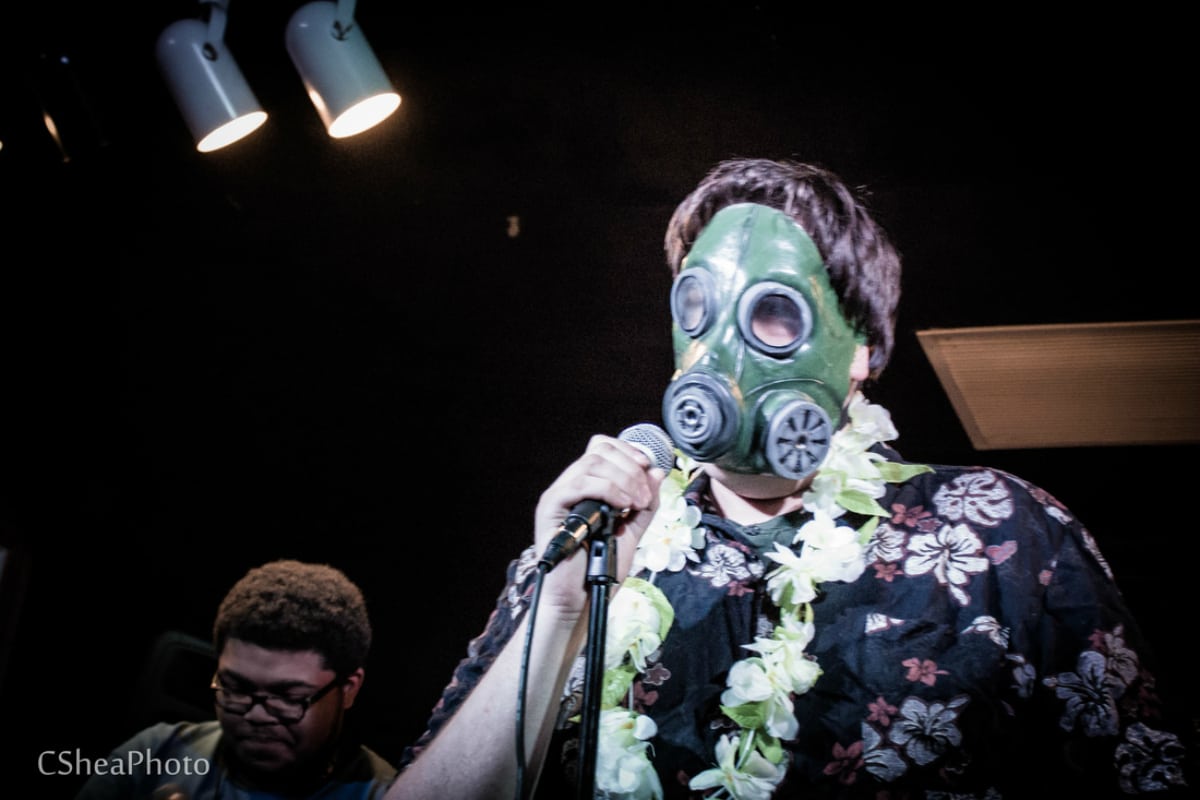 The Massachusetts theatrical music group The Leafies You Gave Me may defy performance categories, but they are so worth the trip.

The Leafies You Gave Me is first-and-foremost a band. But they’re not solely a group of musicians collaborating and recording; they’re also a theatrical music group. Operating in the style of bands like Of Montreal and mid-career Frank Zappa, The Leafies You Gave Me stages surreal, sometimes chaotic, yet strangely moving theatrical bits to enhance the musical elements of their performances.

The Leafies have been described as “Broadway on Acid,” which is apt but a bit reductive considering their performances are meticulously planned, intentional in their thematic explorations, and, musically, very tight. Viewers feel as if there’s some point to the madness and the spectacle, although the show doesn’t insist upon itself in that way. Primarily, the goal of The Leafies is to lead an audience through an entertaining experience that’s unifying, musically interesting, and unpredictable.

“We have songs, but more importantly, we have a set.” says Matthew O’Leary, who contributes vocals and pantomime for the group. “There’s a dynamic flow, and there’s drama in that way. Even if the piece is chaotic and doesn’t have a clear narrative, there’s an ebb and flow of how intense it gets, how silly it gets, and how scary it feels and, ultimately, how intimate it gets,” says O’Leary. “We try to go through every single color.” 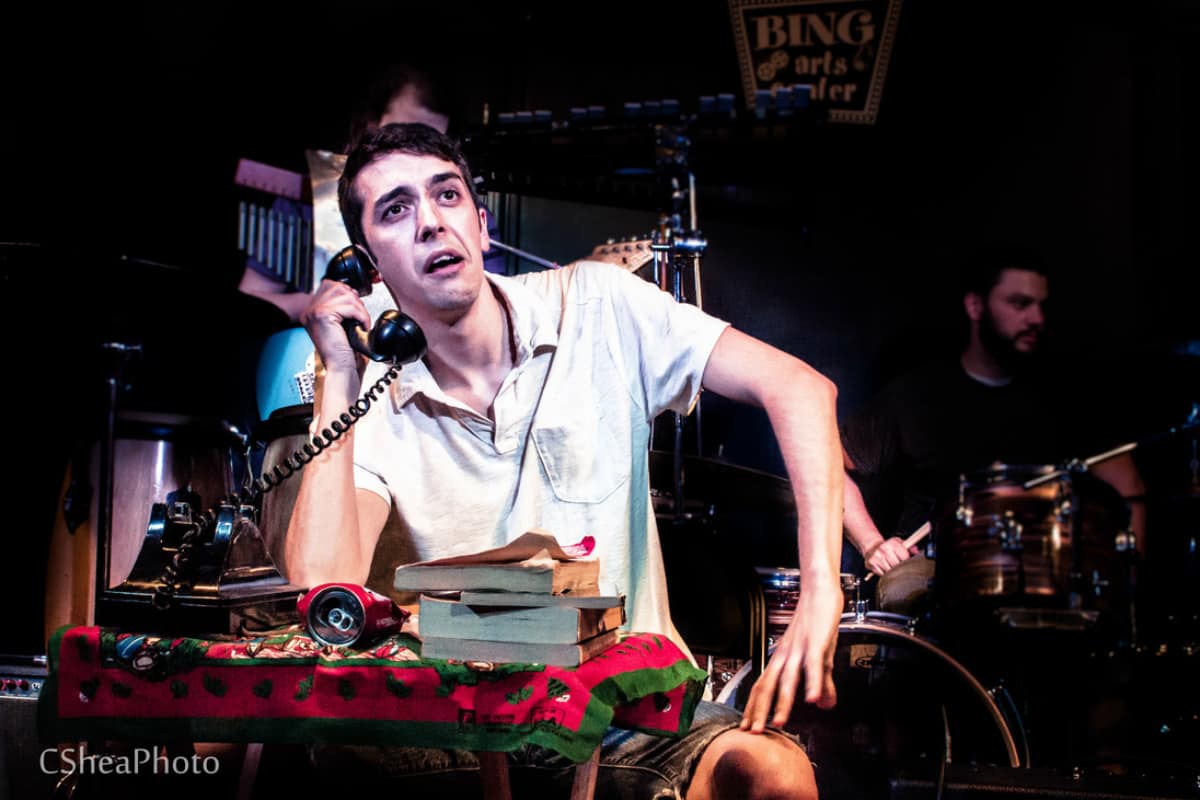 The Leafies You Gave Me, Caitlin Shea photo

“The best thing about doing this show is getting the reaction from an audience,” says Christopher Goudreau, who does vocals, guitar and “banter” for the group. “People usually have the reaction of being in hysterics, being moved, or just confused overall by our performances. That’s something I kind of like about it.”

Along with the group’s leader Jarryd Conz, Goudreau, O’Leary and some of the other 10-piece act play a rotating group of questionable, loveable, and anxiety-inducing characters while the full band plays on. During the 45-minute performance, you’ll see Goudrea as a mega church preacher getting chomped by a giant demi-god clam, O’Leary going to sleep on a makeshift bed in the middle of the stage, and Conz slamming on a keyboard with the phrase “this machine kills gender roles” on it. 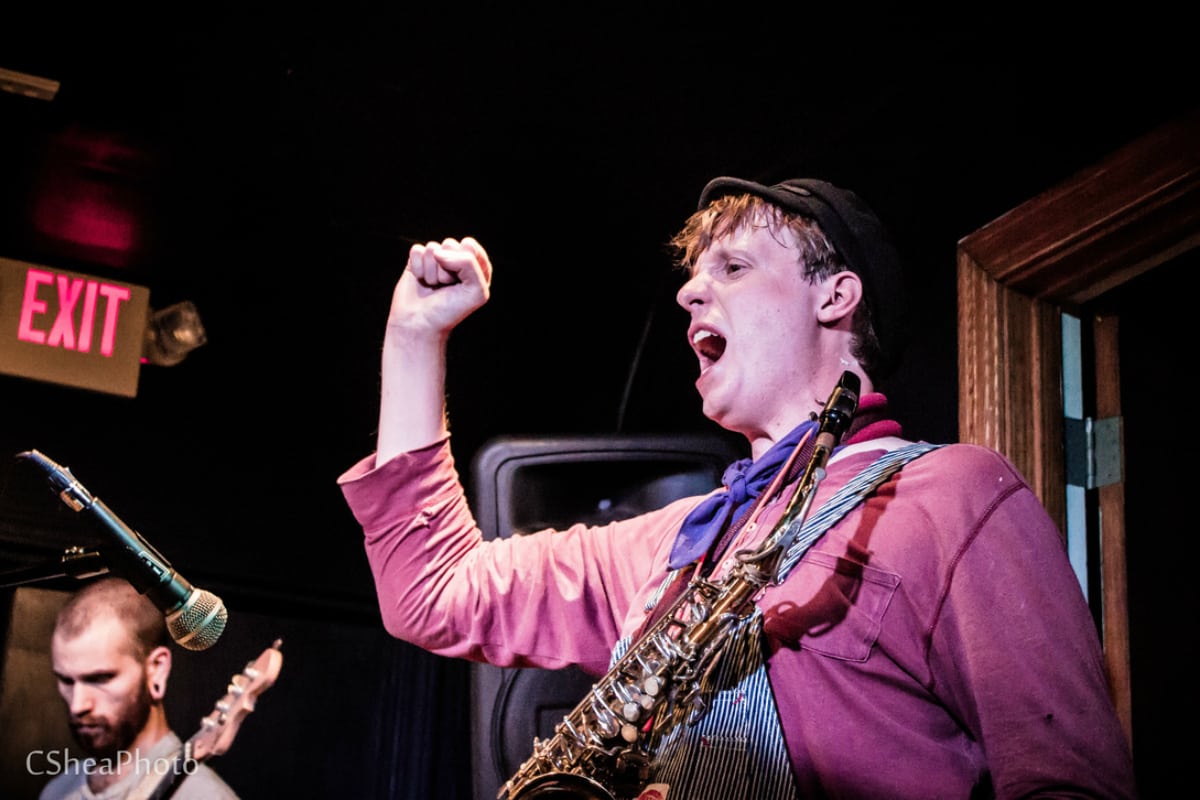 The Leafies You Gave Me, Caitlin Shea photo

Though The Leafies performances inspire a bit of head-scratching, they’ve proved themselves to be broadly appealing.They book shows in all kinds of venues with different kinds of bands. In the past two years, The Leafies have staged their show in dive bars, basements, community organized cultural events, and private studios, rarely ever feeling out of place. “Just as much as we’ve fit into all those places, we’re equally freakish and weird in each context,” says O’Leary. “We’re the same level of misfit-ness in each scene.”

Most recently, The Leafies landed a residency at Hawks & Reed Performing Arts Center in Greenfield, with their final performance scheduled for August 18th. Using Hawks & Reed as a cauldron for creativity and experimentation, The Leafies created new material for each new show they performed at the space. Harkening to their DIY basement show roots, the band played amid purposefully laid-out beer cans, Christmas lights, and even a hot water heater. “We cycled through all these kinds of bands that would play at those kinds of shows,” says O’Leary. “We were an indie pop band called Honey Clouds,” continues Goudreau, “and a post-hardcore band called Optimal Defiance.”

After the last alto sax blasts and the giant clam is praised, the themes of the show start to emerge in a bizarre way, tied together by a statement Conz shouts in a cheerful way: “We’re all leafies from different trees and in the end, we all fall down together.”

“It’s that commonality of death,” says Goudreau. “We’re all connected by the fact that we’re going to die someday. I find that somewhat uplifting.”

Top image, The Leafies You Gave Me, Caitlin Shea photo