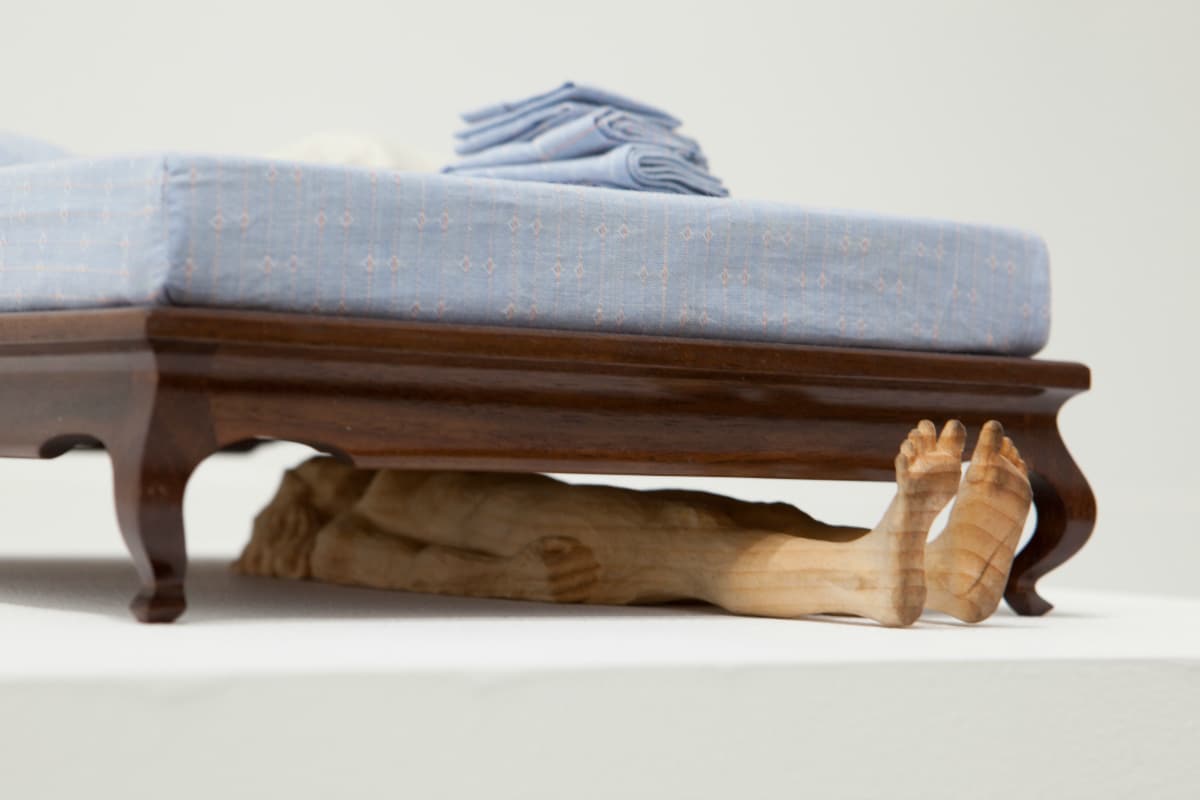 Diana Cherbuliez puts in the work. She can fix anything, from a busted car to a glitchy computer to an infestation of carpenter ants. Labor is her passion and tactile problem solving is her wheelhouse, as evidenced by Diana Cherbuliez works, her new exhibition now on view at the Grant Wahlquist Gallery in Portland, Maine.

The Vinalhaven-based sculptor wanted to find a meaningful way to deal with the impasse she reached after the death of her father, with whom she loved talking about art. “I hit a standstill,” she says. “I got clumsy. I had a complete physical disconnect to everything I was doing. I couldn’t sharpen tools. So I started thinking about that, about how I define myself through work.” That thinking led to pieces like Reclamation and quitting Time, fittingly named and made respectively from wasps and hornets nests, PVA glue, and magnets; her own hair, apple wood, and walnut. (To the latter she laughingly notes she is “desperately allergic.”) 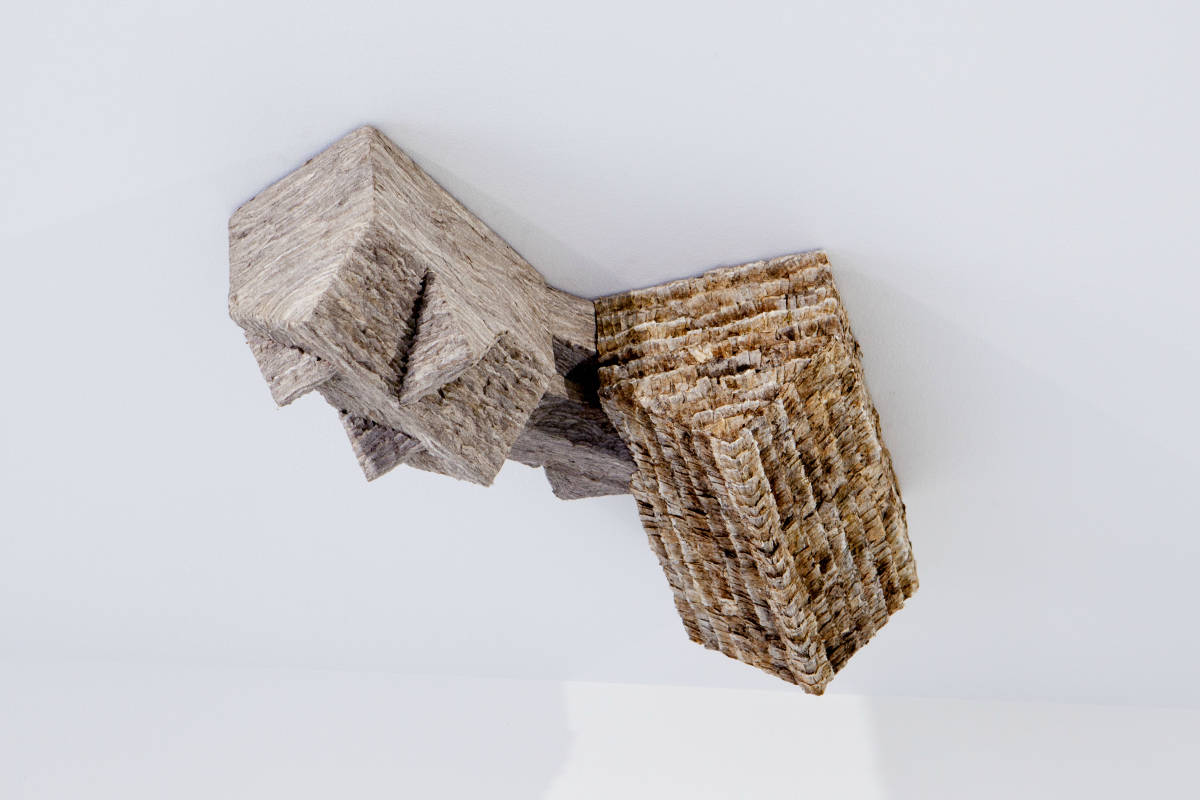 None of this art was easy to create, and that’s the point. Cherbuliez enjoys the “torture” some of her work presents, and while she openly admits its persistent diaristic quality, she says she “wanted to not just make work about personal sadness, because it’s always more complex than that.” Multiplicities of meaning and material abound in her art, suffused with accessible wordplay and jokes as it elucidates the strenuous effort required to produce it.

“There’s so much art out there, there’s so much crap out there,” she says. “We all make crap, and I don’t see any need to make it unless it’s unique, unless I alone can make it.” Even though she lightheartedly writes off a lot of her work as “making things out of junk” and a byproduct of “the audacity of an arts education,” it’s hard to imagine anyone else crafting a piece like Cul-de-sac, a scale model of a half-made bed under which lies a naked wooden carving of the sculptor herself.

Cherbuliez speaks with acerbic wit, threading her perspective with humor as freely as she does in her artwork. “This world is so continually troubling,” she laments, describing how the scorched earth policies we’re facing affect her tastes in other kinds of art. “I can listen to some old country, but I’m pretty much unable to listen to anything other than rap and hip hop right now. Someone put on Joni Mitchell the other night, and I was like, ‘I’m gonna strangle that bitch.’”

In light of disturbing world events, Cherbuliez finds comfort in “conversations with strangers who probably have the opposite life experience,” which are doubly special when she has the chance to have such exchanges in galleries. She also likes the “limitless highway and limiting barrier” of the ocean around her. “On Vinalhaven the ferryboat could get canceled. And it gets canceled pretty frequently. It gets taken out of your hands, just like a blizzard will take options out of your hands. And I kind of like that.” 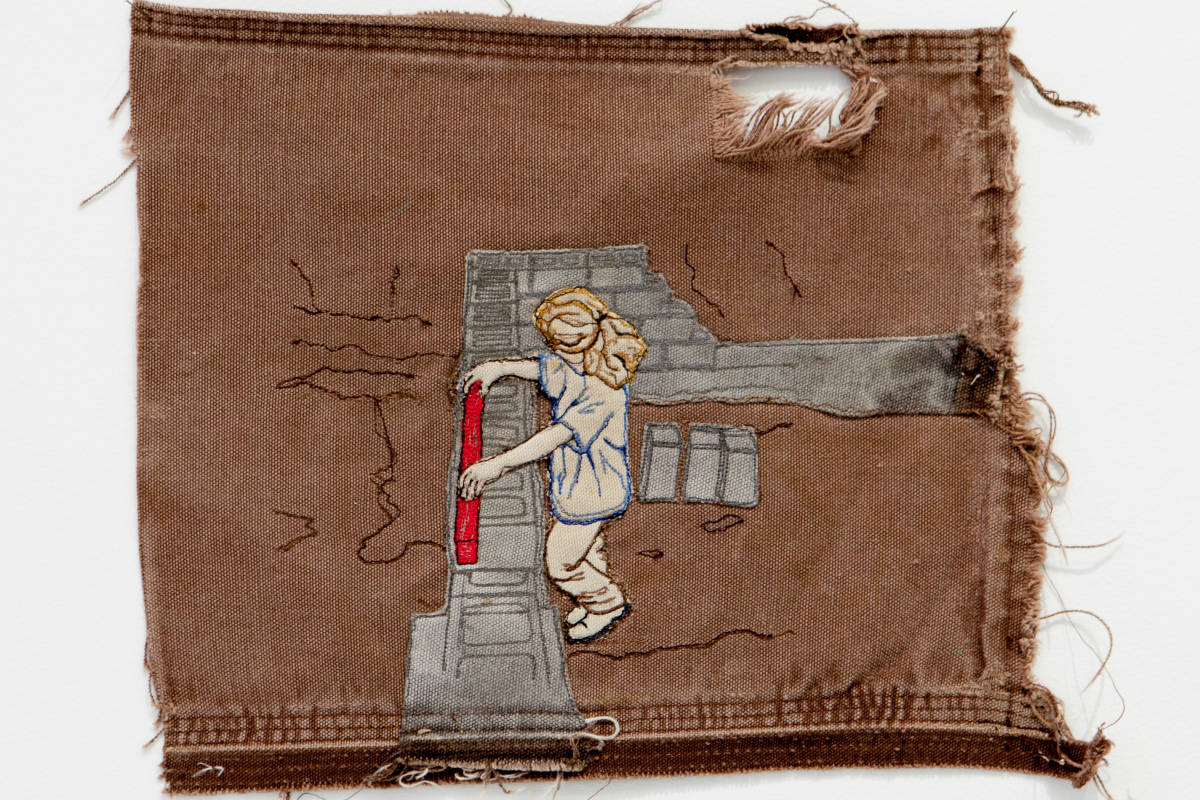 Living on an island requires resourcefulness, a trait the artist can also attribute in part to environmentalist parents and to grandparents who weathered the Great Depression. Worn-down Carhartt pants are one among many salvaged materials Cherbuliez fashions into her work, which inspires frugality and patience in the face of excess. She thinks America’s lust for “prurient thrills” erodes the value placed on intellectual and physical craft. Her work could be considered a reaffirmation of both. “When you slow down your making of something, you invite the slowing down, I hope, of the visual investigation.”

She’s deeply unpretentious already, but New England’s immensely historical landscape gives Cherbuliez further motivation to stay modest. The old buildings, the trees, and the time-straddling isolation of Vinalhaven all inspire a particular humility. “It’s one of those places where I can relish my absolute momentary existence and complete irrelevance. It’s actually freeing. I am not important. I never will be.” Embracing life’s impermanence, Cherbuliez rejects the notion of honing celebrity over craft. “It’s not worth the space, or the materials, or the electricity, or filling up museums.”

As the title of her exhibition clearly underlines, Diana Cherbuliez will always value good work more than ego. “I’m here for a moment. The only thing I feel I really have a right to waste is my own time.”

All images courtesy of the artist and Grant Wahlquist Gallery