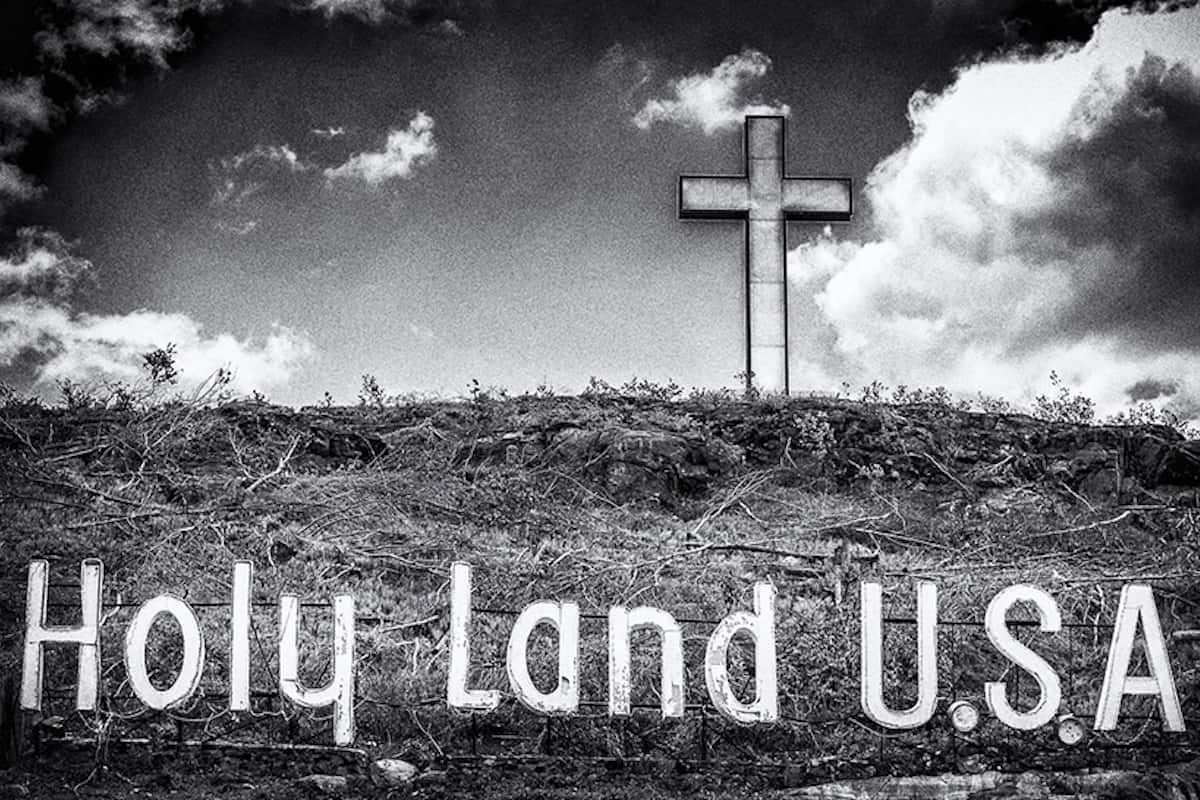 If your travel budget precludes a trip to the Holy Land, you might consider a trip to Connecticut instead. Yes, you read correctly.

This article originally appeared in our December 2015/January 2016 print issue.

If you’ve driven through central Connecticut on either I-84 or Route 8, you’ve likely gazed upon the Holy Land—Holy Land USA in Waterbury, that is. What you’ve seen is the 56-foot cross that stands on a promontory above the city, but the 18-acre site on which the cross stands contains more wonders. Indeed, like Howard Finster’s Paradise Gardens or Simon Rodia’s Watts Towers, Holy Land USA was the work of a visionary.

John Baptist Greco was a Waterbury attorney and devout Catholic who, in 1955, led a group called Companions of Christ to the top of Pine Hill, where they created a miniature facsimile of the Holy Land. Though focusing on the life of Jesus—Jerusalem, Bethlehem, Herod’s Palace—they also fashioned a Garden of Eden and a diorama depicting Daniel in the lion’s den, using old bathtubs, cinder blocks, cement, and clay. The cross—which can be seen from all directions on the highways—was the anchor to the endeavor.

Word about Greco’s feat spread to the faithful, and soon busloads made pilgrimages to walk among the knee-high structures and enjoy the view of the Naugatuck Valley. By the 1960s and 1970s, as many as 40,000 visitors arrived annually.

As the demographics of the city changed, fewer people came, and nature and social decay vied for what could do the most damage. Greco closed Holy Land in 1984 and, upon his death two years later, bequeathed it to the Filippini Sisters, an order of nuns. With little money to keep up the property, it fell into near ruins. Efforts were sporadically undertaken to restore it, but the task proved too daunting. Still, the signature cross continued to stand tall and serve as a beacon of hope to the often-beleaguered city and a beloved landmark to travelers.

In 2013, Holy Land was blessed with a miracle when businessman Fritz Blasius and Waterbury mayor Neil M. O’Leary purchased the property. The first improvement they made was erecting a new state-of-the-art steel cross that is internally lit and changes colors at night.

Chuck Pagano, a recently retired ESPN executive who grew up in Waterbury’s Brooklyn neighborhood, is among those who’ve since helped restore the park.

“Holy Land was within eyesight of my bedroom growing up,” says Pagano, president of Holy Land Waterbury’s board of directors. “After mass on Sunday, my family would walk up there. It’s the only thing left that connects my city with my past.”

Squads of volunteers with similar tales spent most of 2014 clearing brush and trees that had grown in the past 30 years. Two annual masses have since been held in the chapel on the property, attended by more than 700 people.

“There’s good energy in the city over this,” says Pagano, pointing to the “Holy Land USA” sign, built to echo the famous Hollywood sign. “Long term, our vision is to restore the whole thing to its original state, maybe even more so.”

Like a lot of religious shrines, Holy Land isn’t easy to find. There are no markers on the highways below, and there’s only one marker on the serpentine streets leading up to it.

“My old football idol, Vince Lombardi, used to say, ‘No pain, no gain,’” says Pagano. “You gotta make the effort.”

“On my first trip out of the country for ESPN, I was gone to Australia for two months,” he recalls. “We started back two days before Christmas. On the final leg of the trip, after being in the air 30 hours, I looked out the plane’s window as we were coming out of some clouds and saw Holy Land. ‘Now I know I’m home,’ I remember thinking.”