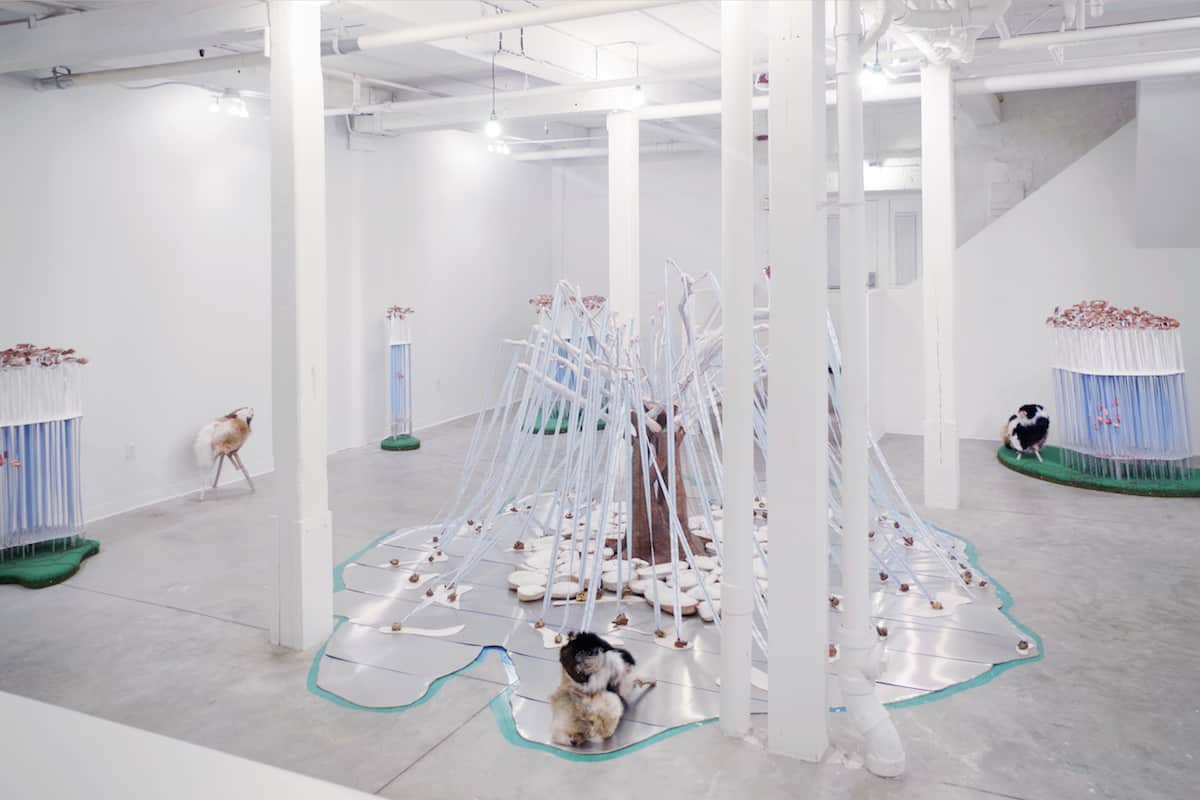 If you’re in the market for art that hangs passively on the wall, GRIN may not be the right gallery for you.

This article originally ran in our April/May 2016 print issue.

Curators and working artists Lindsey Stapleton and Corey Oberlander—neither of whom is yet 30—have an ambitious remit to “exhibit the work that we feel deserves the spotlight,” particularly by artists just starting their careers.

Since opening in 2013, the duo have staged more than 30 shows at a breakneck pace, including the first Rhode Island edition of Bring Your Own Beamer, a worldwide series of pop-up exhibitions where groups of artists project their work on bare walls. In addition to attending annual art fairs like Art Basel Miami Beach and the SPRING/BREAK Art Show in New York City, they recently curated GROUND RULES at the University of Arkansas’s sUgAR Gallery.

The inspiration to start an unjuried, democratic space has its origins in Stapleton and Oberlander’s student days at Massachusetts College of Art and Design, where they grew frustrated by how difficult it was to show “in a real space that wasn’t a café or a basement.”

That challenge stayed with them. After graduating in 2009 and 2010, respectively, the two lived on opposite coasts (Stapleton in San Francisco and Oberlander in the greater Boston area) until escalating rents forced them to look for a more affordable, art-friendly city. A Google search for “live/work/Providence” landed them squarely in The Plant, a sprawling mixed-use complex in the heart of Olneyville, a working-class neighborhood often called Providence’s “second downtown.”

Starting a gallery wasn’t their plan—at least not at first. “We knew we wanted it to be a studio space,” says Stapleton. “But we didn’t really figure out what we were going to do until we moved in and realized what Providence could handle.”

It took the duo a couple of months to realize that the city was hardly oversaturated with galleries showing emerging contemporary art. Researching Olneyville, they saw an opportunity to contribute to the growth of an up-and-coming arts community that includes feminist collective Dirt Palace (which celebrated its 15th anniversary in 2015) and neighboring art space Yellow Peril, which opened in 2011. “It was the perfect place for us to be,” explains Stapleton. “Not overly gentrified, still close to downtown Providence. And in the larger art-world scale, still close to Boston and New York City.” 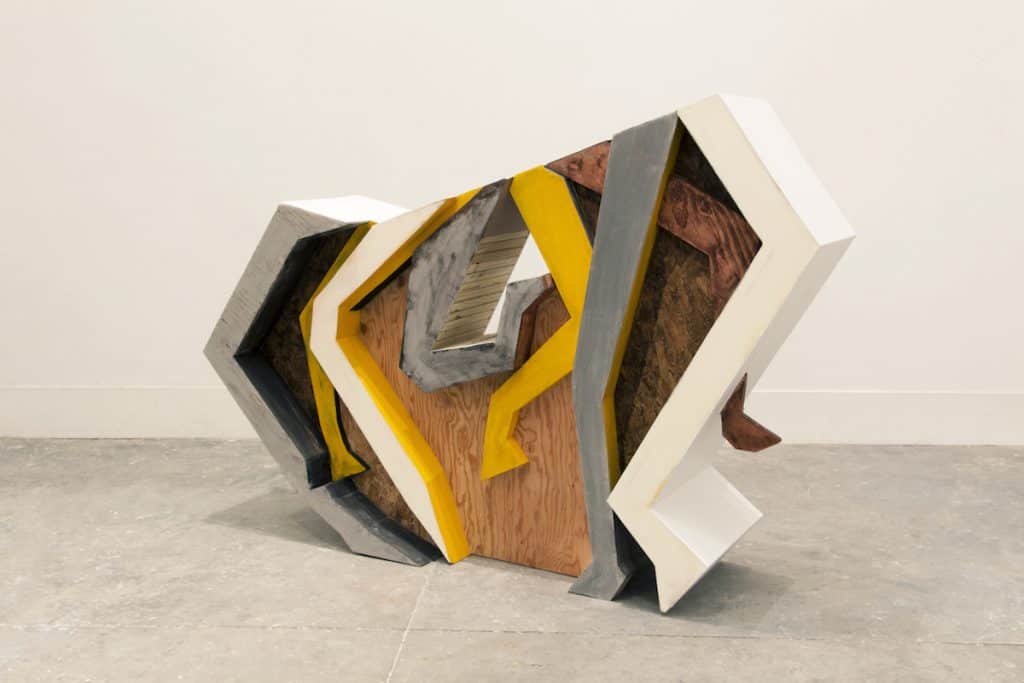 GRIN’s inaugural exhibit was a group show titled Some Place Here that asked artists to riff on the prompt “home.”

“We try to do one group show to three-to-four solo shows,” says Stapleton. “We like solo shows. We like working with people who have the ability to put together a really solid body of work that can make a whole collection.”

Defining the GRIN aesthetic is a tricky business, because the work is so wide-ranging. Whether big or small, two-dimensional or three-, the guiding philosophy is playfulness and sly humor. (“Expect anti-jokes and anti-art,” reads the one-sheet for the recent group show, Besides.) Rough edges are welcome, self-importance is not.

Materials are frequently abused or subverted, as with Leah Piepgras’ day-glo clouds made of quartz, resin, or Styrofoam, or Charlie Smith’s punctured, cut, and drilled wooden assemblages that bend, snake, and contort.

Exploiting the tension between fantasy and domesticity is another frequent theme. Allison Baker’s mordantly funny video Party Girl crops tightly on two sharp-taloned hands as they carefully rip layer after layer of garish wrapping paper off a succession of gifts. The clichéd femininity of the trappings (long pink nails; hyper-saturated pink and polka-dotted paper; explosions of glitter) serve to underscore the Sisyphean punch at the end: the gifts are never revealed. The viewer remains stuck in a purgatory- loop of almost psychotic expectation.

Eddie Villanueva’s witty Guitar Ride reengineers a staple of American childhood, the kiddie ride, swapping in a classic symbol of American manhood, the electric guitar, in place of the pony. Drop 50 cents in the slot, and the guitar shimmies out the famous droning chord from “Tomorrow Never Knows” on the Beatles’ Revolver. Both curators work closely with the artists on the installation, which often becomes part of the art-making process itself. One of Smith’s early GRIN pieces, Strips, was actually created on site. “He came one day when we were de-installing the previous show,” explains Oberlander. “We were taking down a partition wall, and he asked if he could have it. ‘Sure, but it’s broken into pieces already.’ He was installing the next day, and I left for lunch. When I came back, the wall had been tipped on its side so it was a big diamond, and there’s a big 2 × 4 that’s been drilled into it. It turned into an additional piece—his reaction to the space—and it served perfectly for his show.”

That ability to “take risks and try weird ideas,” as well as collaborate outside the glare of the mainstream art world, gives the tight-knit Olneyville community its big advantage.

“As neighbors, we’ve developed what I call a ‘Spirit of Coopetition,’” notes Yellow Peril director Vanphouthon Souvannasane. “Besides aligning our opening nights, we share competitive intelligence on the international art market, specifically art fairs and other opportunities to extend the reach of our represented artists.”

Now that Stapleton and Oberlander are more enmeshed in the greater Providence arts community—including the Rhode Island School of Design, where the curators regularly sit in on portfolio reviews—they have come to appreciate the city’s long-term value for artists, particularly how it can help support more organic artistic growth. They’ve seen far too many students jump directly from graduation to a big city like New York or Boston without realizing that they may be leaving opportunity—and affordable incubator space—behind.

“When [such migration] comes to our attention, it’s like, Could you think about this?’” says Oberlander. “[Providence is] really close, and you can still access that New York scene or Boston—especially with the way that social media works.”

He and Stapleton say they have “a million different ideas” about how they can grow GRIN in the near future using the momentum they’ve built. Oberlander smiles: “It feels like we’re building a team.”