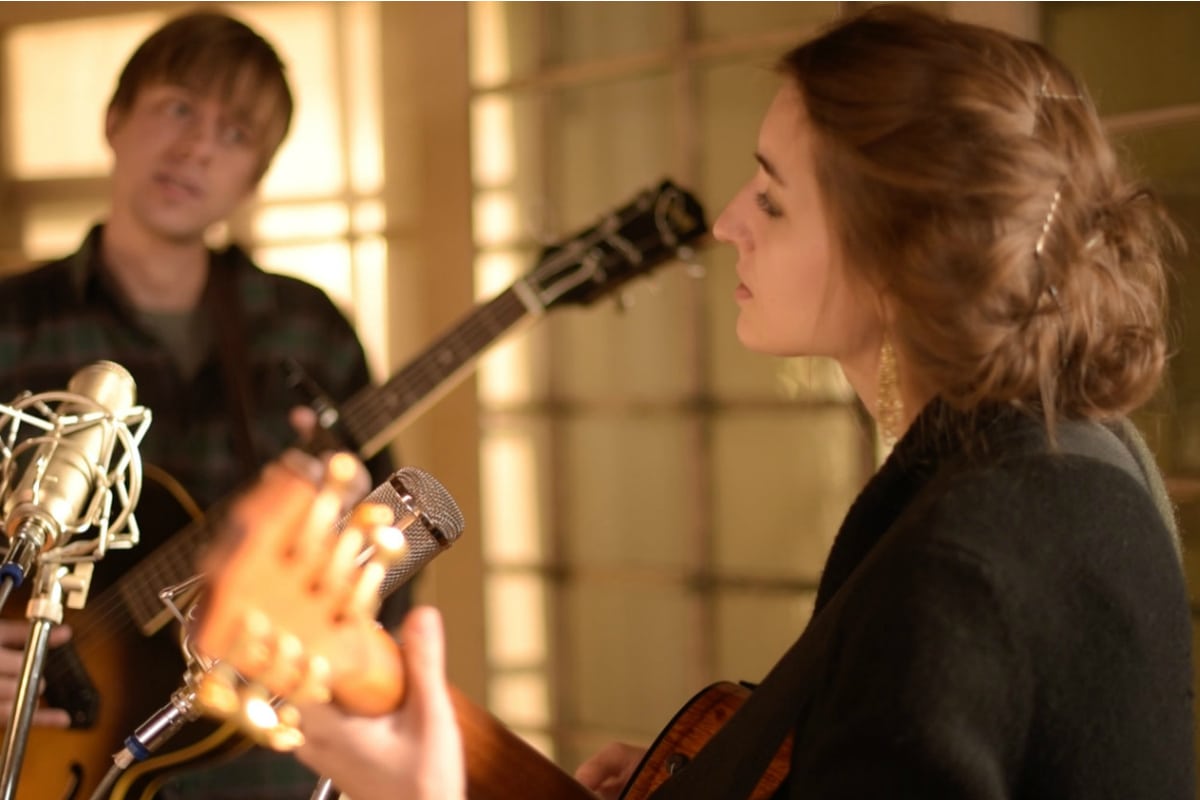 Cricket Blue is a Burlington, Vermont acoustic duo whose music has literary leanings. Have a little Ovid with your tunes.

The connection between song and literature is a long and complicated one. Look to Bob Dylan’s winning of the Nobel Prize and all the hand-wringing and chin-stroking that prompted. Many say that literature sprang from song—that rhyme, melody, and meter allowed the first bards to flesh out their material into longer forms. Cricket Blue, an acoustic folk duo from Burlington, Vermont, explore that place where literature, short stories, folk tales, mythology, poetry, and song all swirl together.

I spoke to the two—Laura Heaberlin, 27, and Taylor Smith, 26—by phone from their home recently. Heaberlin had just finished her shift working at a local bookstore. “I’ve got both feet in dying industries,” said Heaberlin with a laugh, referencing my comment about book selling and music making in the age of streaming and online sales.

Both Heaberlin and Smith studied literature in college. The literary bent of their material can be seen from the titles alone. The duo’s most recent EP is called Io, which you might remember from reading Ovid’s Metamorphoses, and there’s a song called “Angela Carter,” which is what Heaberlin calls a tribute to the style of the English author of novels that are like graphic feminist fairy tales at their core. Another song features a reference to Niobe, another tragic figure from Greek mythology.

The duo took shape after Heaberlin and Smith had shared some bills together as solo artists. Sometimes they’d do a couple tunes together, work on a cover, or practice an arrangement to stretch out their time on stage. “There were all these two-hour slots to fill and neither of us had that much music or stamina,” says Smith. The sessions made them realize that they liked playing and singing together more than being separate solo acts. Both Heaberlin and Smith write. They each harmonize on the other’s songs.

They do a lot of shows around the Northeast, heading out from their Burlington home base and fitting all their equipment into a Prius.

Like the myths and stories that Cricket Blue draw on for inspiration, the duo’s songs have a vaguely old familiar sound to them, but with unexpected turns and twists. It’s folk music in the sense that it is acoustic music, with stories that draw on a tradition, but it’s not the Carter Family. For one thing, Cricket Blue doesn’t seem to be especially fond of repeating choruses and refrains. Both songwriters convey the sense that they’d prefer to wedge more lyrical details into a song instead of spending valuable time going over words that have already been covered.

“I feel like if you’ve already said something, and you can potentially say something new, why say the same thing again?” asks Heaberlin, posing a question that many poetically inclined songwriters have asked themselves before.

Smith echoes the sentiment: “If left to my druthers, I’d have tons and tons of lyrics with no chorus.”

If many songwriters in their 20s find the experience of making their way in the world, navigating adulthood, relationships, work, independence, and the emotional and psychic ruffles that come with that to provide sufficient depths of feeling to mine for songwriting purposes, Heaberlin says that she tends to focus on narratives and characters outside herself for their songs.

“You can only really write so many songs about your life,” she says, “especially when nothing really changes in your life.”