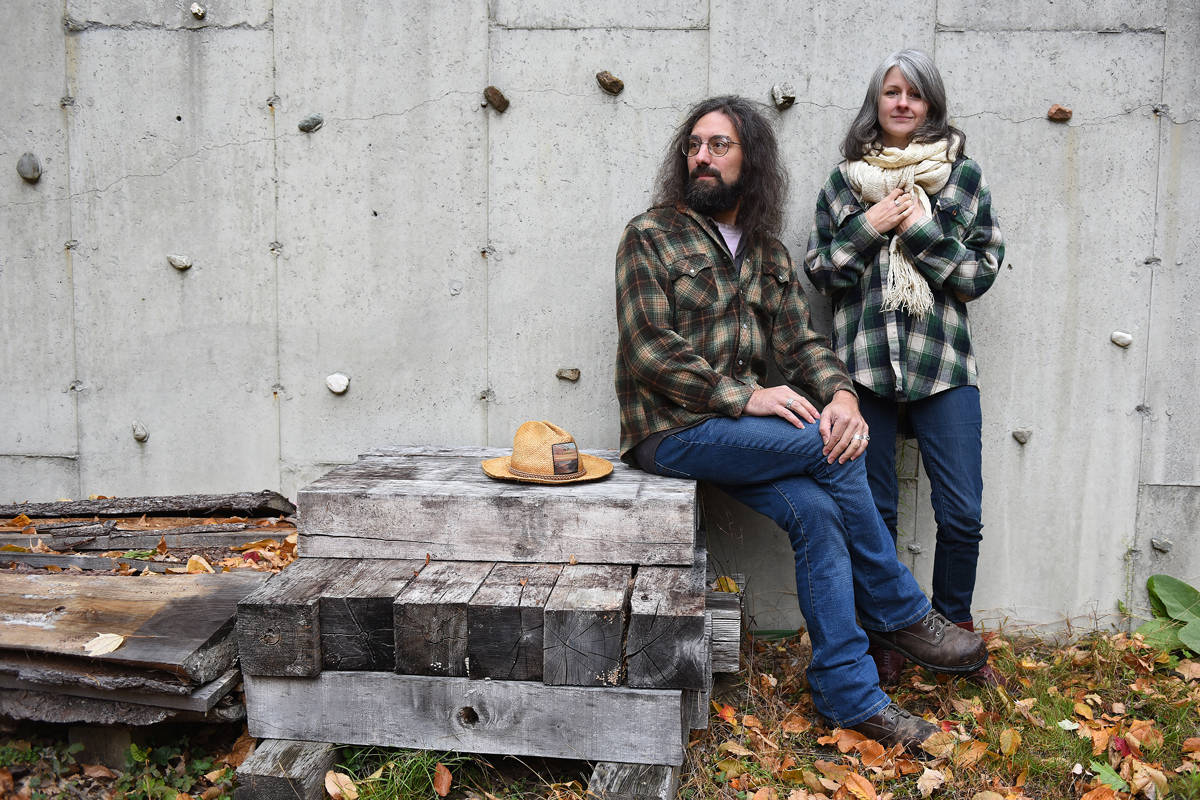 This article originally appeared in our December/January 2015 print issue.

The Green Mountain State’s most famous musical product is almost certainly the jam band Phish. If that quartet, formed in Burlington in 1983, earned a reputation for playing extended improvisations and working in the spiritual and musical wake of the Grateful Dead, MV & EE took shape largely in the twenty-first century, in the southern end of the state around Brattleboro, still playing off many elements of the Dead’s legacy but with drastically different results.

Valentine and Elder are also a couple. Unlike Phish, MV & EE are unlikely to sell out Madison Square Garden anytime soon, but the duo operates on a whole other level, making deeply psychedelic, small-batch, boutique, esoteric folk music that’s tinged with noise. Or maybe it’s indie rock tinged with folk. Either way, their recordings and performances are highly improvisational and experimental. The music of MV & EE embodies a thread of the reality of their home state: it’s both earthy and spacey, and it’s all propelled by a spirit of intrepid self-reliance.

This year was a big year for Valentine and Elder. A new MV & EE double album, Alpine Frequency, came out in the summer, at about the same time Valentine released a solo double album as well. “They were both pretty large records,” says Valentine. “We try to make a record that someone ideally is going to go back to and revisit. So we try to make the album have a certain depth or trajectory. There were several years of work on both of them. Hopefully that will tide some people over for a while.” 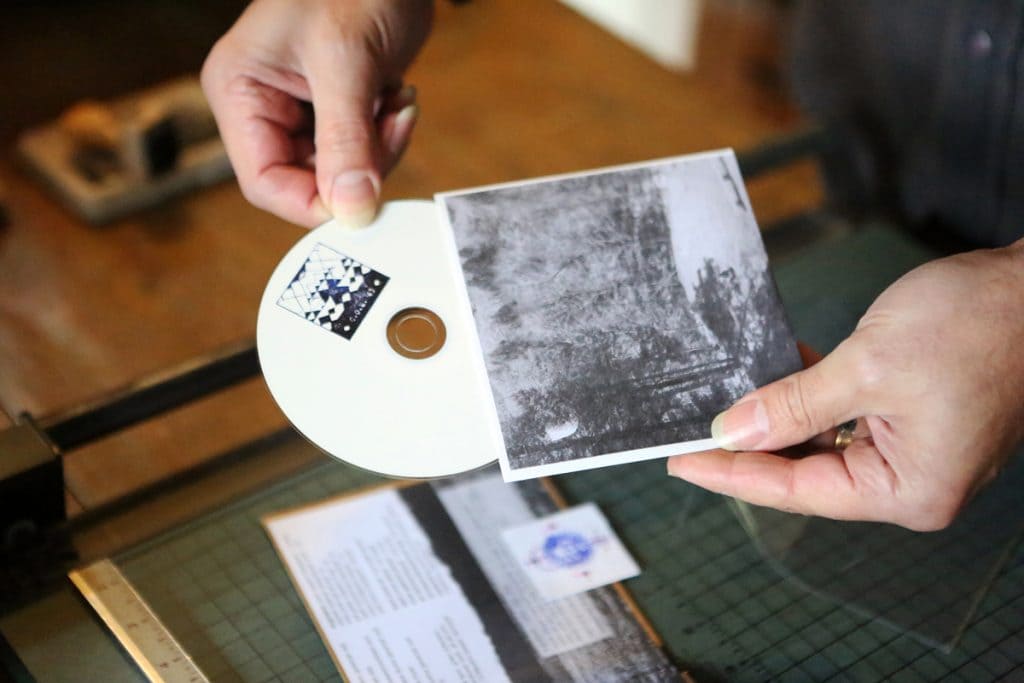 Valentine’s new record is called Midden Mound, which, if you’ve forgotten some of the terms from your college anthropology class, is basically a prehistoric trash heap made up of shells and bones and other stuff. It’s a meaningful pile of refuse, dense and old, yielding secrets to those patient and learned enough to sift through it. The title seems to fit right in with the concept of “sonic agriculture” Valentine has spoken of, a utilitarian, plow-sow-and-reap vision of music making, with natural forces and human labor producing fertile results.

“I can’t get out of the underground,” jokes Valentine about the record’s title. But then he adds, “I thought [the title] worked for that body of work specifically; it’s definitely the remains of a certain sonic settlement of mine.”

That’s not all just talk. Sound attains something close to physicality in Valentine’s solo work and in the music of MV & EE. The music and the recordings are more about textures and resonance than melody, lyrics, and song form. The attention to the physical extends to the packaging and marketing of the music as well. Both new records were pressed on vinyl in addition to being available in other forms, such as CDs and MP3s. The duo often creates limited-edition original artwork to go along with some of their small-batch releases or to bring to shows, to make each record one of a kind.

Valentine’s connections with recorded music—with vinyl in particular—go back to his formative musical experiences.

“I’ve always been around records,” he says. “My parents collected records. They had a record library. They encouraged me to use the turntable. I heard a lot of music growing up that was interesting to me. I worked at record stores since I was a teenager. I stayed working at record stores. I was a lifer, a record-store casualty.”

Selling records has never been the most remunerative line of work, and surviving by playing DIY avant-garage folk presents challenges. But Valentine and Elder approach the work with a flinty Yankee ethos. They are impressively prolific, releasing an average of two records a year, which brings their total to something like 32 since 2001. They also run a boutique record label that releases limited pressings of live recordings, packaged with original artwork. Oh, and they have a two-year-old daughter. So they keep pretty busy.

Elder does work as a freelance graphic designer, and she says their living space reflects the creative multitasking that goes on there. “You should see our house— it’s part house, part workshop. It’s all blended together,” she says.

MV & EE possess a particular kind of twenty-first-century musical eclecticism, drawing on the Old, Weird America of Harry Smith’s epic Anthology of American Folk Music, steeped in old-time music, country blues, and field recordings (the duo was asked to contribute a song to the highly regarded 2015 tribute record to English singer and folklorist Shirley Collins), and yet their work is also in conversation with some core ideas of contemporary classical music, minimalism, and free jazz. 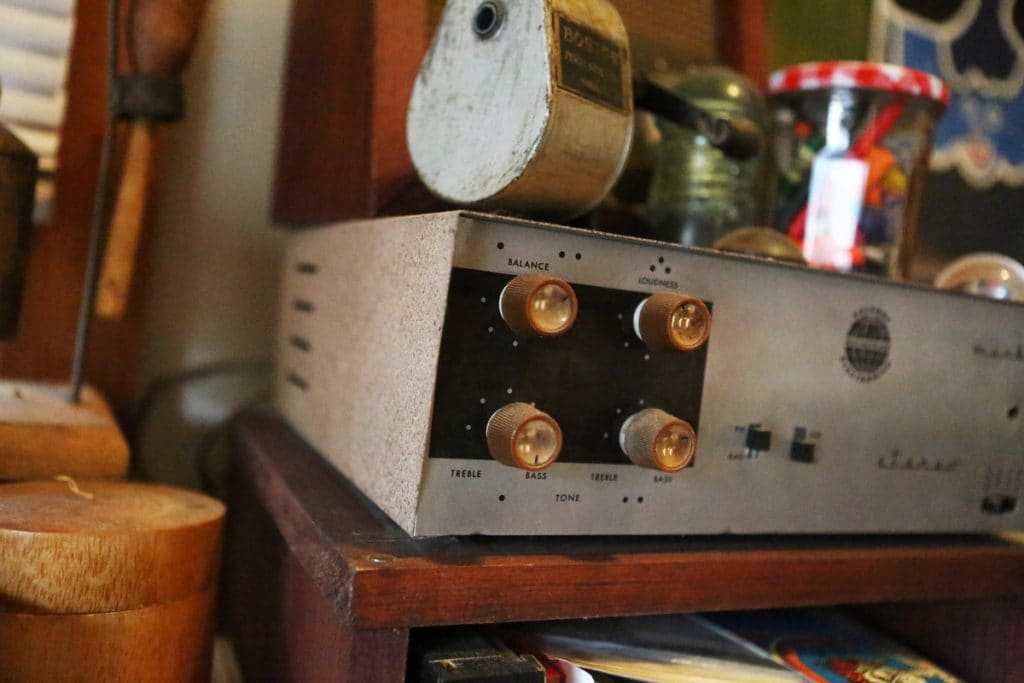 “That’s very natural,” says Elder. “If you look at our record collection, we’ve got our Carter Family and our Sonny Sharrock records right next to each other.”

She grew up in Virginia, where singing was a regular part of her extended family gatherings. “I kind of brought the Appalachia to the table,” Elder says. “I grew up thinking that everybody just got around the piano on Sundays and played different songs.” That included folk songs and plenty of religious material, sources that MV & EE have returned to.

“I played sax in elementary school,” says Valentine. “I got kicked out of the school band for trying to play like [keening iconoclastic saxophonist Albert] Ayler. I got booted.”

Valentine got one strand of his musical education for free by auditing classes in the Conservatory of Music at the State University of New York at Purchase, where several pioneers of experimental and computer music taught and where the homemade instruments of maverick composer Harry Partch were housed at one point.

Extended drones, ominous echoes, alternate tunings, dub effects, and spooky war whoops all make appearances on Valentine’s new solo record. Two-chord vamps attain a mystic density as they’re prolonged. It fits right in with the MV & EE oeuvre. The DNA of much of MV & EE’s material seems like it can be traced to either “Dark Star,” the Dead’s epic interstellar exploratory vehicle; “Cortez the Killer,” Neil Young’s mythic caveman-like protosludge masterpiece; and “If I Could Only Remember My Name,” David Crosby’s haunting and beautiful comedown opus. Those are good genes, at any rate.

Valentine and Elder make the most of what they call the global I-91 corridor—a joking way of referring to their spiraling network of friends, fellow musicians, and collaborators. And the town they live in, outside of Brattleboro, is something of a magnet for other creative people.

“We’ve been here for 13 years,” says Elder. “Everybody who lives in this area whom we’re friends with is here for the energy. It’s still a very important reason why we’re here.”

But the actual I-91 connection links them to likeminded artists from New Haven, Connecticut, through western Massachusetts and up through Vermont. Contributors to the new batch of records include J Mascis of Dinosaur Jr. and Pete Nolan of art-noise trio The Magik Markers. And the band has recorded on Thurston Moore’s Ecstatic Peace! record label, based in Easthampton, Massachusetts.

For MV & EE and for Valentine’s solo album, recording isn’t just a matter of heading into the studio with some tunes, some guitars, and rolling tape. Bits are recorded in Valentine and Elder’s home studio or sometimes at a friend’s place, or while traveling; then sometimes layers are added on elsewhere. Some tracks might take shape in a living room and others in a fancy studio. The setting needs to be conducive to improvisation, which is central to much of the duo’s work.

“I have pretty elaborate recording techniques deployed that we use now,” says Valentine. “And they’re primitive, too, in some cases. There are techniques used to sometimes make one performance sound like multiple ones. The mood of the moment was more important than the technicalities.” 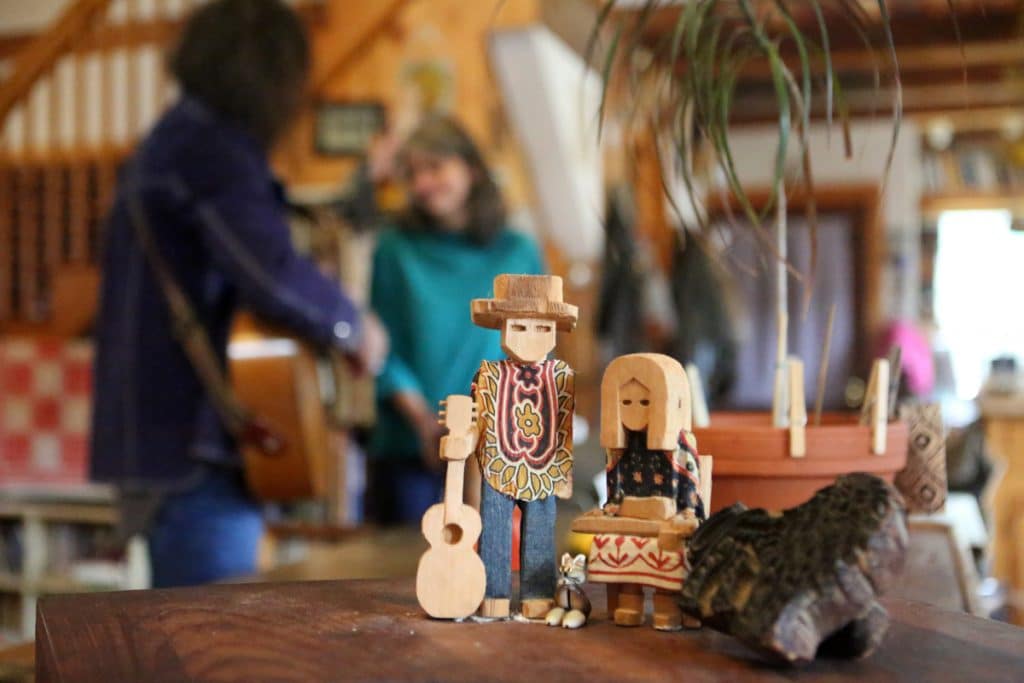 For all of their folk tendencies and pedigrees, MV & EE can also sound like a stoner rock outfit, with lumbering bass lines and bruising drumbeats anchoring their unison singing and slashing guitars, like on “Susquehanna (Sole Art Trample)” from 2007’s Gettin’ Gone. Though the deep psychedelic connection is clear, there’s also a classic rock aspect to some of MV & EE’s eclecticism. “Susquehanna (Sole Art Trample),” for instance, is followed by a song called “The Burden,” which has gentle finger picking and high, atmospheric pedal steel guitars. It’s a pairing that might be at home on Led Zeppelin III, where the howling stomp of marauding invaders gives way to soothing and dreamy acoustic songs rooted in traditional folk music. “I’m in such a trance state usually when I’m playing,” says Elder.

That textural and tonal perspective is what helps the music withstand repeated listenings. “We try to keep it interesting for ourselves as much as for people who might be hearing it,” says Valentine.

But—as with something like a Fela Kuti record, an Indian raga, or a piece of music by La Monte Young— sometimes the music of MV & EE and Valentine’s solo work are meant to possibly scramble one’s sense of time: to transport the listener into a slow-drip mindset, where a pattern repeating for 15 minutes somehow becomes more gratifying and meaningful than one that stops after 3 minutes. Sometimes that aesthetic can be at odds with the demands of the marketplace. Valentine had originally planned on making Midden Mound a triple record, but he decided to settle on a double album.

“I kind of peeled that concept back,” he says. But he will be releasing the material that would have been that third record as another single solo album in 2016.

Valentine and Elder don’t have an elaborate promotional machine behind them. They do much of the behind-the-scenes logistics themselves, booking and publicizing shows. So if people are possibly starting to hear their music more and know their name after years and years of productivity, it’s because the world is beginning to come around to them. The combination of heavy rock, obscure folk, and experimental music is perhaps less of a head-scratcher than it was 20 years ago. “People are a little more ready for what we’re doing now,” says Valentine. “People are catching up to the sound.”

One senses that being creative and productive is just the way Valentine and Elder live their lives, and they’d be playing music every day and handcrafting one-of-a-kind art to go with it whether or not they had fans and a career. “I just like to make things,” says Valentine. “It’s probably why I like living up here.”